This page of Marvel's Guardians of the Galaxy game guide has a detailed walkthrough of the fight against the boss called Fin Fang Foom - it's a dragon encountered in Chapter 13 (Against All Odds). You will learn the main attacks of the dragon and how to weaken and defeat it.

The first phase of the duel fight the dragon 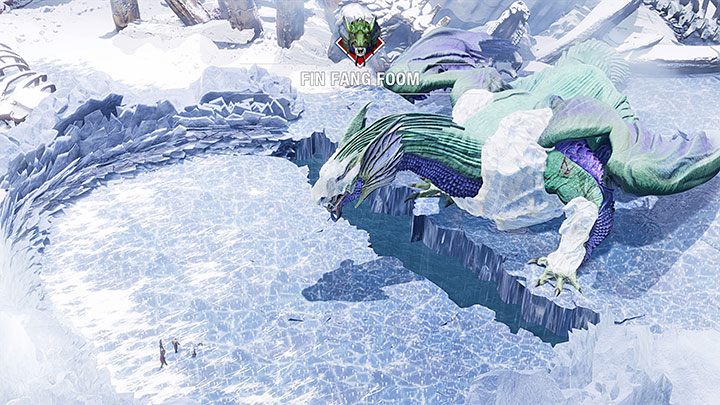 Fin Fang Foom is the name of the ice dragon which you will face in Chapter 13 of the campaign. The fight with a giant creature will start soon after you reach a large frozen reservoir exploring the icy planet Maklu IV. 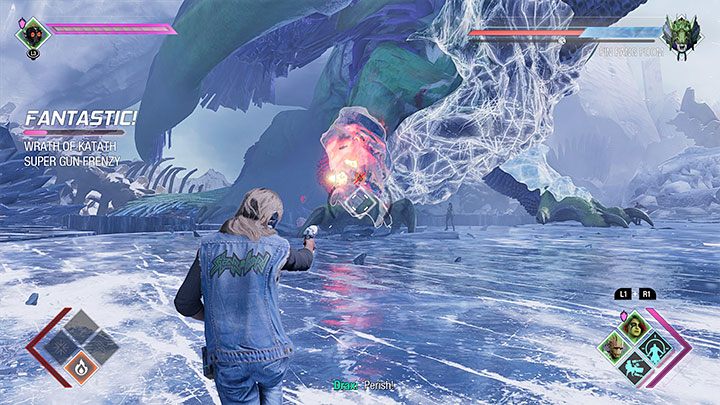 In the first part of the encounter, your priority will be destroying fragments of the ice dragon's armor - they are on his chest, claws, and head. It's worth holding down the left trigger so that the crosshair automatically locks on these types of weak points on the boss's body.

Use the plasma element to weaken the boss's armor, which was unlocked shortly before the confrontation with the boss. Your successful attacks will gradually weaken the blue " ice" dragon energy bar - you won't be able to deplete the "proper" red heath bar for now. 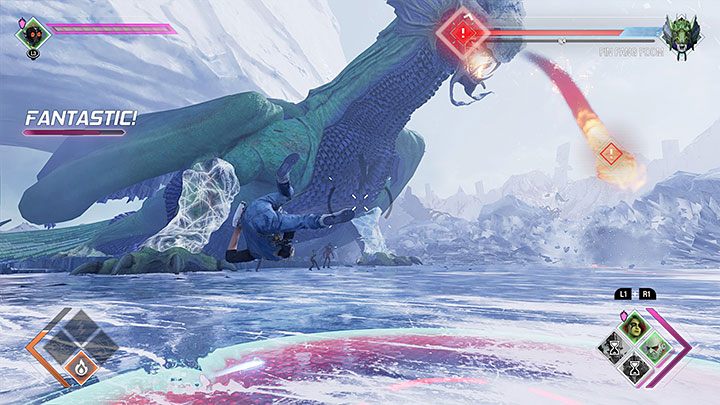 Of course, the boss won't remain idle waiting for your attacks. Fin Fang Foom uses several main types of attacks indicated by red exclamation marks, so you will have time to react:

1) Spitting fireballs - They can cause serious damage if they hit you. Stay in constant motion and dash sideways if you see a missile coming your way. The game indicates where the projectiles will land with red circles on the ground. 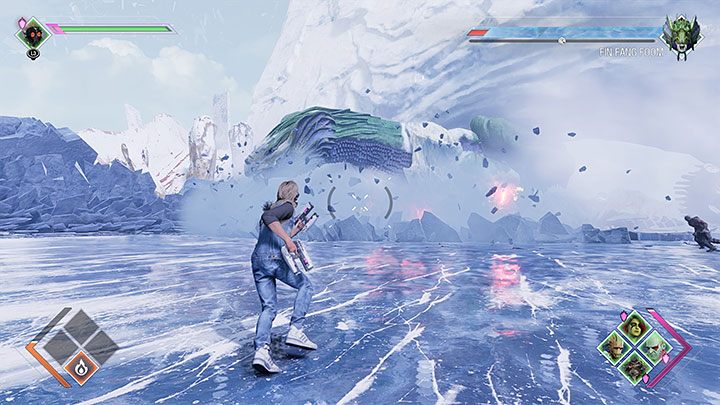 2) Massive attack with the whole body - If you're attacking the boss from a long distance, you shouldn't worry about it. Otherwise, quickly move away from the dragon to get out of the range of the attack. 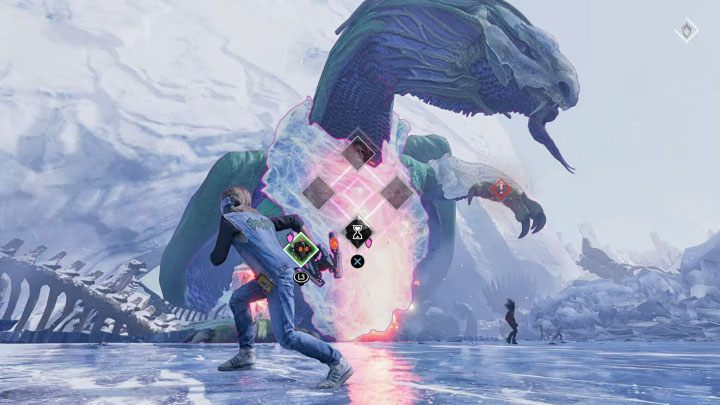 3) Strong attacks with claws - Avoid standing near the boss when he's going to hit you. Interestingly, there is a good chance that the claws will dig into the ice and become an easy target for your plasma attacks for some time.

The second phase of the fight with the dragon 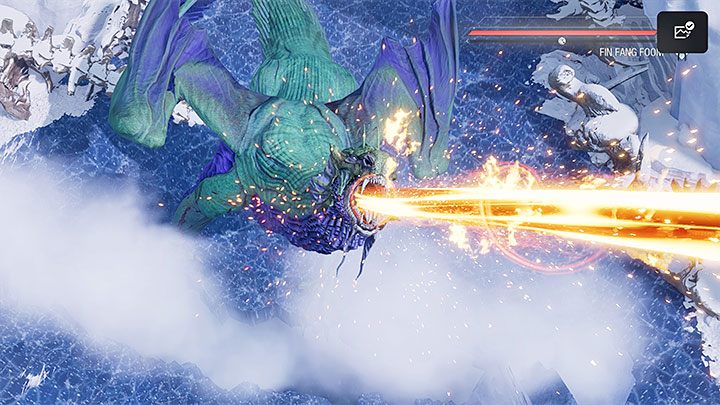 After you advance to the second phase of the fight, the arena will be bombarded by ice blocks for the first time. Every time that happens, you have to look closely at red circles on the ice and try to stand somewhere in between. This will allow you to dodge falling ice blocks and small fire missiles, which will also hit the ground. 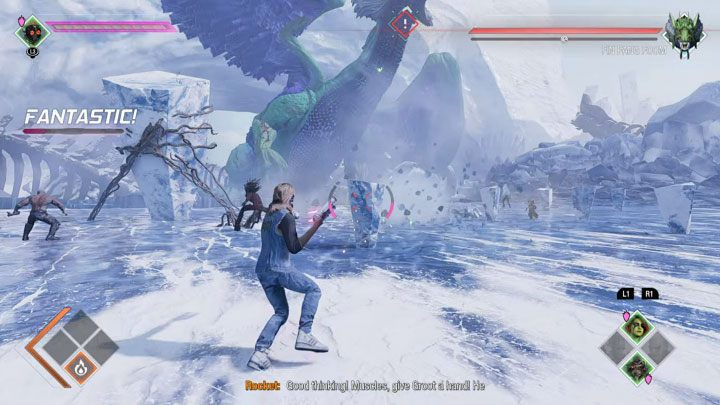 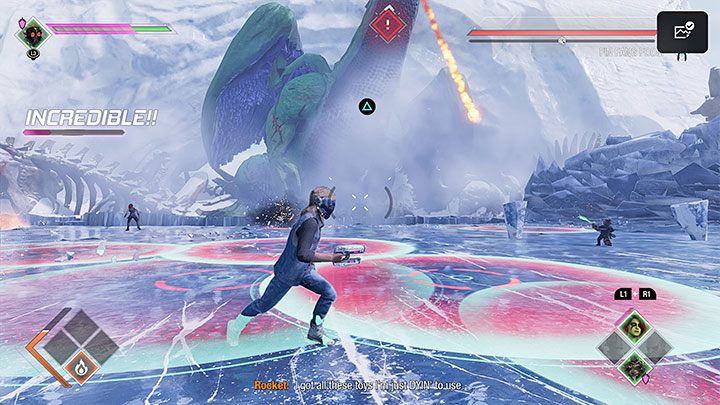 You should note that Drax and Groot will take care of the largest ice block (Picture 1).

Wait for a signal from Drax - the interaction button icon will appear before the dragon (Triangle / Y - Picture 2). Quickly press the button to activate a team attack and throw a huge ice block at the dragon. 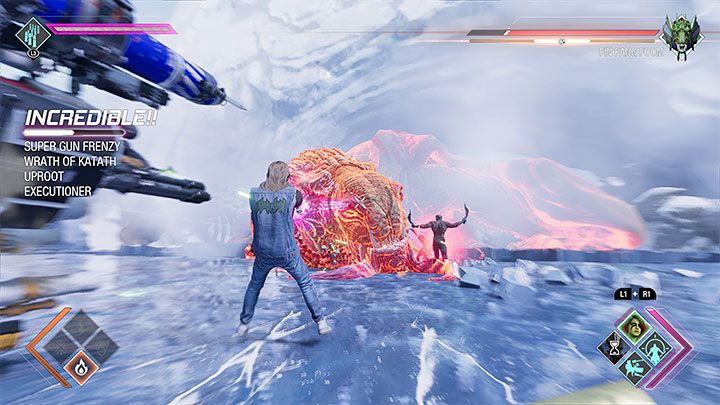 If the attack is successful, the boss will be stunned, and he will collapse on the arena. Take this opportunity to activate the strongest abilities of the team members. Your goal is to deal as much damage to the monster as you can before it gets off the ground and becomes more resistant to attacks. 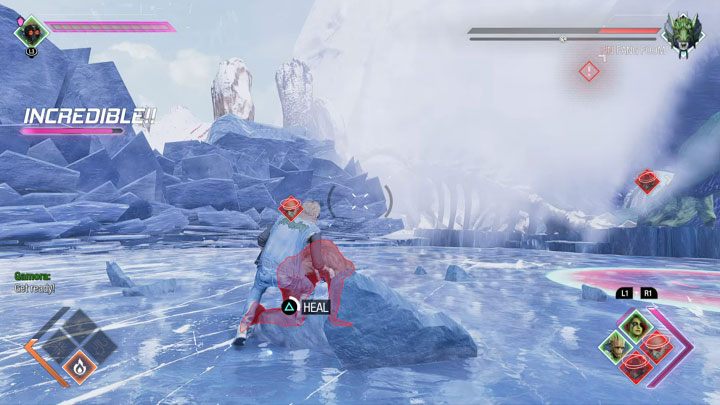 From now on, you can repeat the scheme we've described. You have to wait until the dragon shoots at "flying" blocks that fall on the ground and then until Drax is ready to throw the largest block. Then, attack the stunned dragon again.

Remember to keep helping fallen comrades - both those whose health dropped to 0 and those with the negative status of freezing imposed on them. This is especially important in the case of Drax because, without him, it will be impossible to stun Fin Fang Foom effectively. 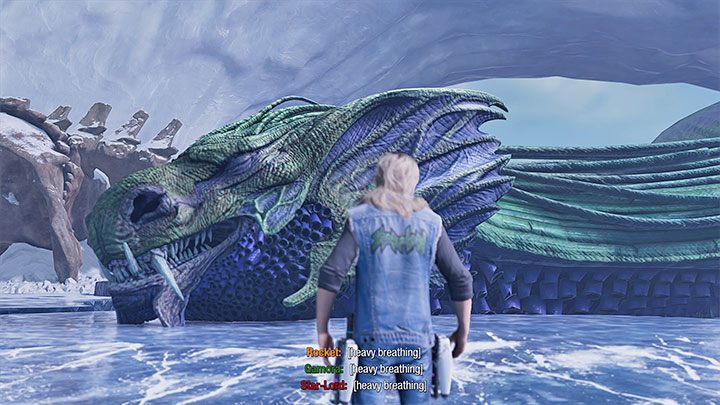 As a reward for defeating the dragon, you will receive an achievement, Foom's doom.