This page of the guide to Marvel's Guardians of the Galaxy contains information on all secrets in Chapter 14 - Into the Fire. You will learn about the location of the collectibles in chapter fourteen and how to successfully get them.

Remember to collect all the collectibles in chapter 14 in one go. You can't save progress while replaying chapters. This is especially important for costumes - you need to get all of them to unlock the platinum trophy. 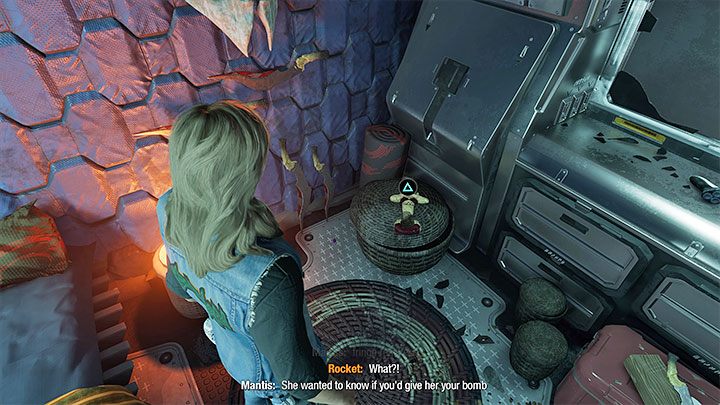 Note - This and the secret described below require having the Guardian Collectibles from Chapter 13. Only then will they be available to find aboard the Milano ship. This is also your last opportunity to examine previous collectibles the Guardians found. Leaving the Milano ship at the beginning of this mission serves as a point of no return of sorts, that is, you'll no longer be able to explore the ship during the campaign's endgame.

Visit Drax's cabin aboard Milano and find the Guardian Collectible inside. You'll initiate a conversation with Drax which can be played out in any way you want. 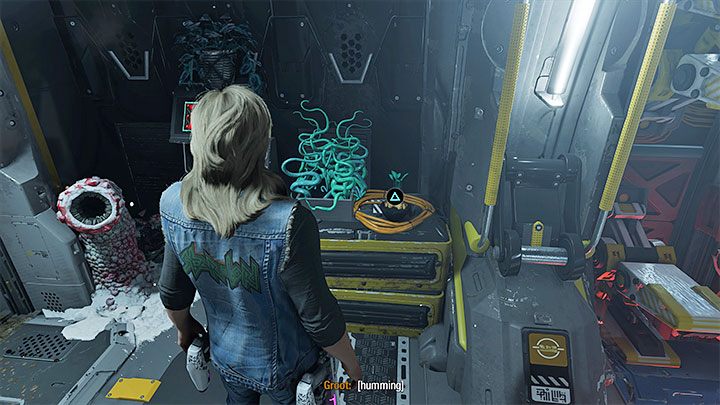 Visit the lower level aboard Milano and find the Guardian Collectible there. You'll initiate a conversation with Groot and Mantis which can be played out in any way you want. 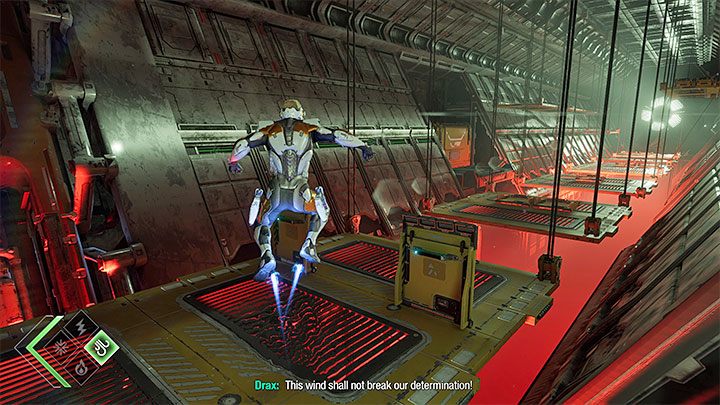 You can find this secret some time after beginning the chapter, specifically once you reach the tunnel with a large fan shown on the picture above. In this location you must use the wind element to raise obstacles on the metal balcony, use them as cover from strong winds and quickly run to further obstacles when the fan stops moving for a brief while. 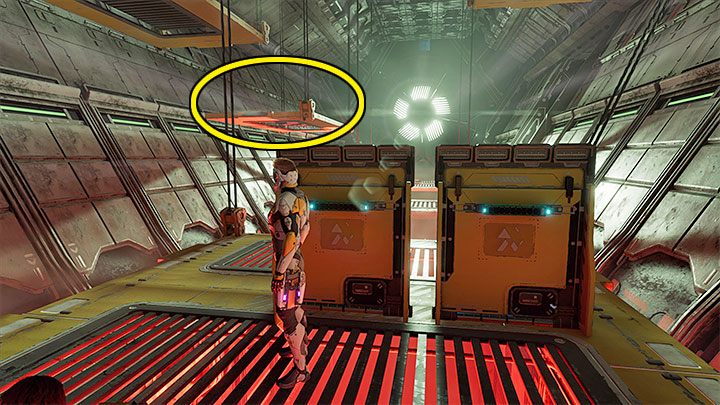 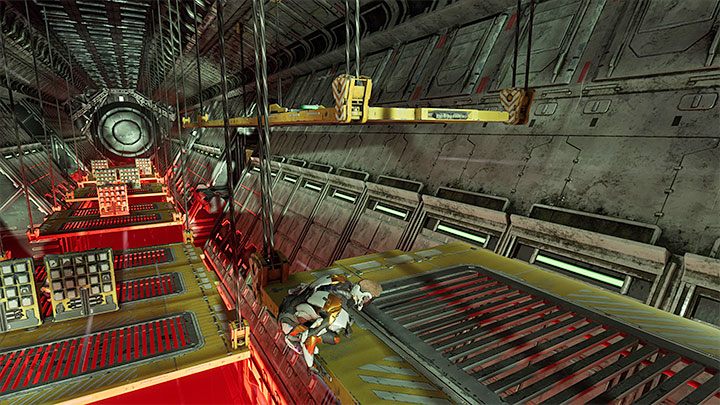 While moving further through the tunnel you should take an interest in the upper-left balcony shown on picture 1.

You have to quickly double jump towards the balcony on the left, then, just as quickly, jump over to the neighboring one. Use the power of wind to raise some cover and hide behind it before you get blown off the balcony. 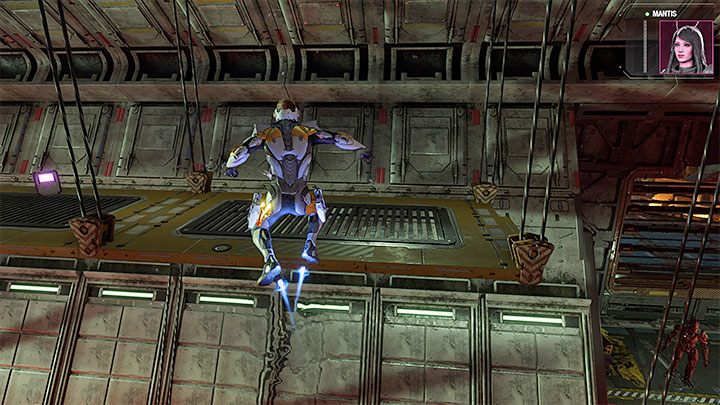 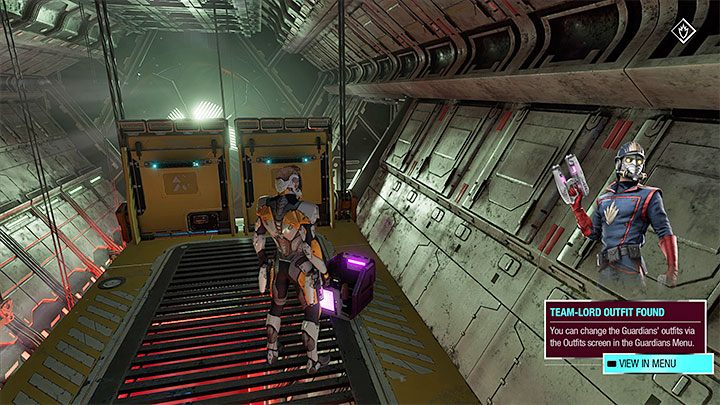 Wait for the right moment to jump to the neighboring balcony on the right side of the tunnel - you can see it on Picture 1.

On the final balcony you'll find the chest containing an outfit, as well as some new cover. 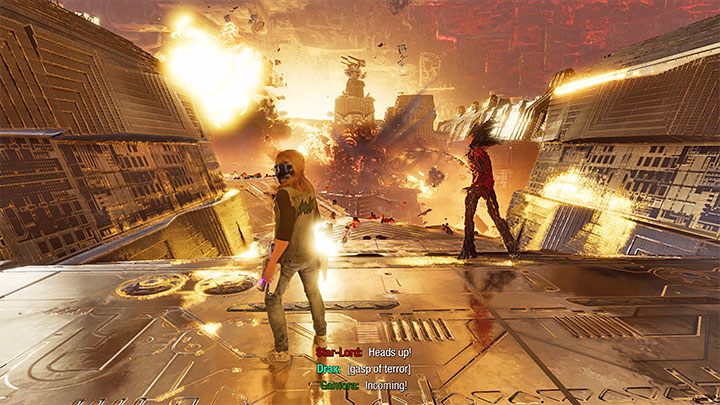 You can obtain this outfit shortly after witnessing your enemies being bombarded by Lady Hellbender riding a dragon. This event happens while you're travelling out in the open. 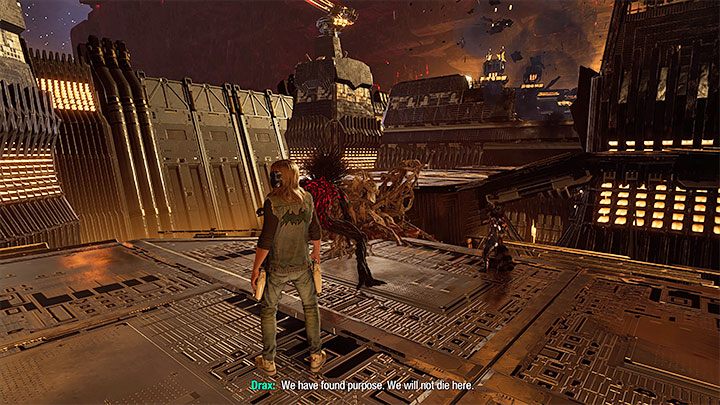 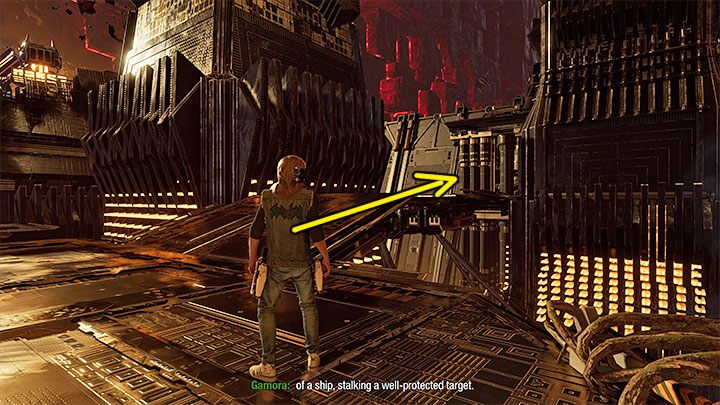 Shortly after the bombarding you'll reach a new area, where Groot will create a bridge without being ordered to (picture 1). Go over the bridge.

Turn right, stand in the place shown on picture 2 and make a double jump towards the far-away ledge. 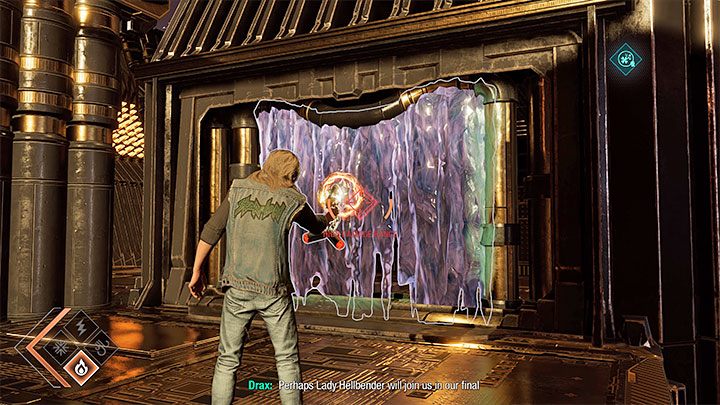 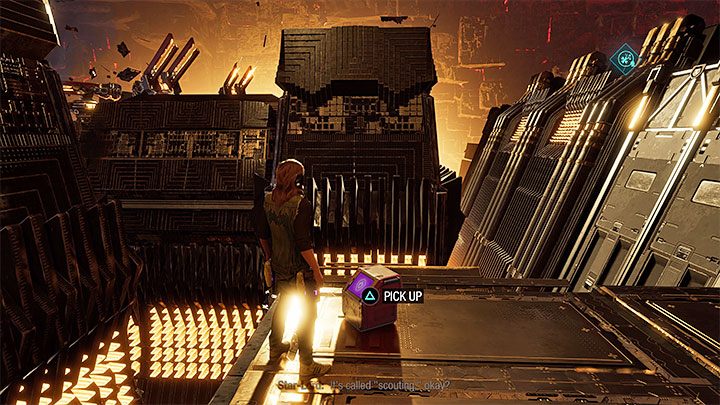 After landing, turn right again. Standing in the place shown on picture 1, you must use the fire element on an ice barrier to destroy it and open the way forward.

Now simply reach the higher ledge on picture 2, where you'll find the chest containing the collectible. 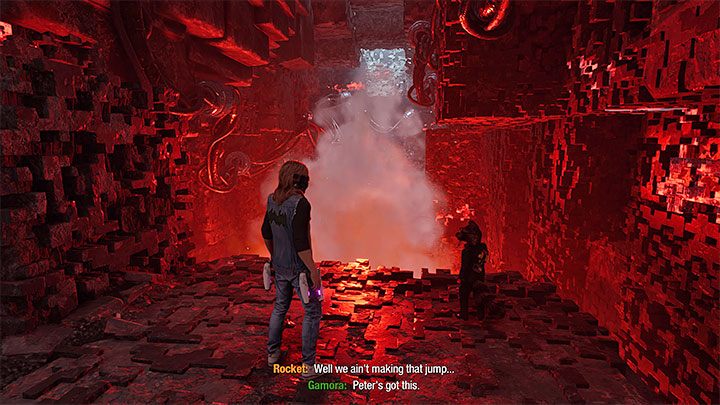 Before you can start looking for this outfit, you must first reach the mines, an area you progress through by shooting the waterfalls with ice - the first waterfall is shown on the picture above. Freezing each waterfall creates an ice platform you can jump onto. 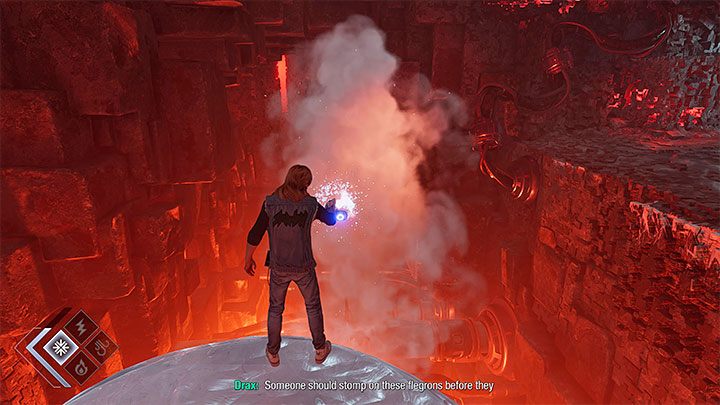 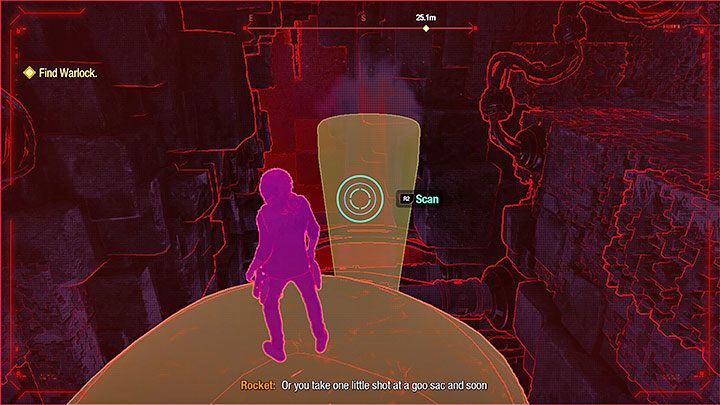 Stop and take a breather on the second ice shelf, that is, after defeating a small group of enemies and using ice on the second waterfall. You must deviate from the main path and take an interest in three waterfalls to the side (picture 1).

This part is made more difficult due to the water flow not being constant, but you can easily remedy this by using the vizor (picture 2). Quickly use the ice element once the water starts flowing to create a new ice platform (fortunately the platforms are permanent and won't disappear). 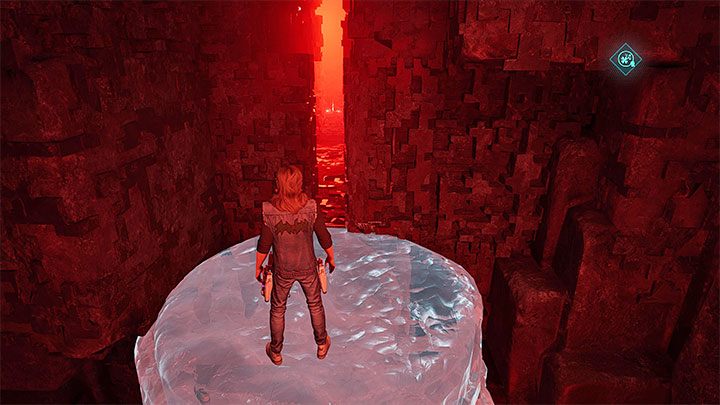 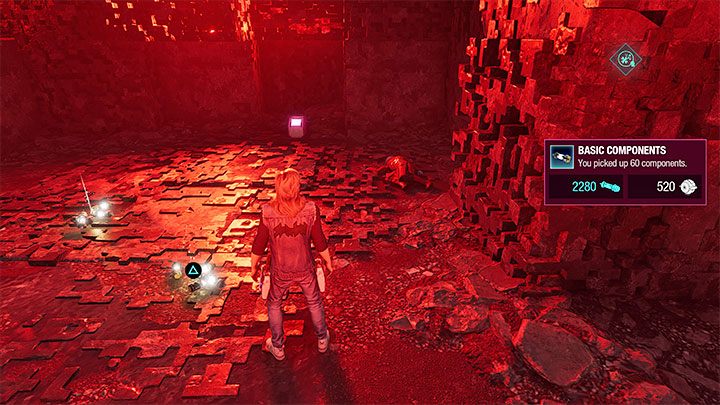 Use this method to create three platforms. After reaching the last platform you'll notice a gap (picture 1) you must go through.

It leads to an area containing plenty of loot and an outfit chest on the right.

Archives: To Whom It May Concern 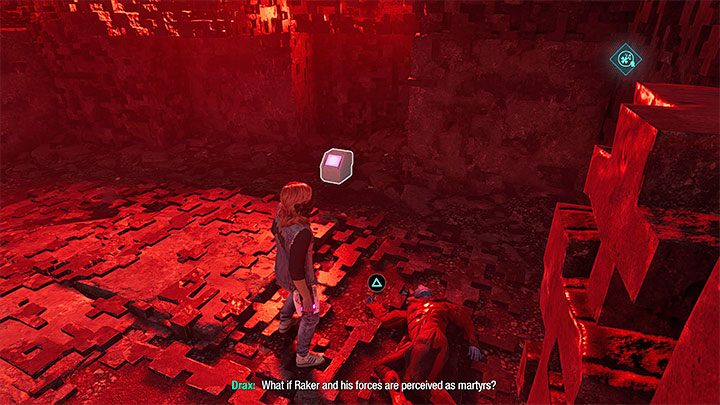 This collectible is very easy to get, as it can be found in the same room as the outfit described above. You'll find it on the ground, next to the corpse.