This page of the guide to Marvel's Guardians of the Galaxy contains information on all secrets in Chapter 13 - Against All Odds. You will learn about the location of the collectibles in chapter thirteen and how to successfully get them.

Remember to collect all the collectibles in chapter 13 in one go. You can't save progress while replaying chapters. This is especially important for costumes - you need to get all of them to unlock the platinum trophy. 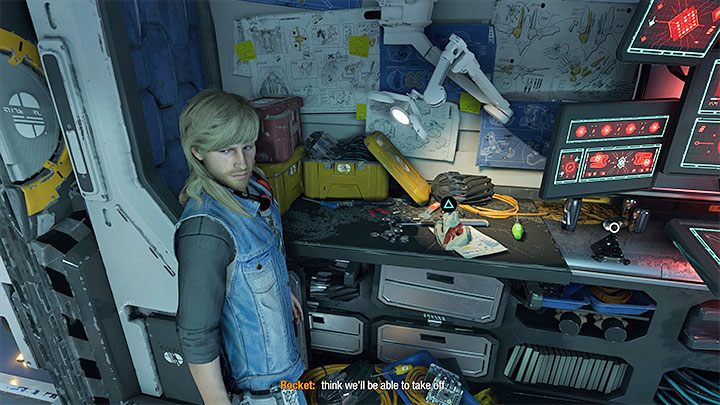 Note - This secret requires you to have the Guardian Collectible from chapter 12. Only then will you be able to find the mask aboard the Milano ship. You don't need to immediately examine the collectibles delivered to the ship. You can save them for later. Your last opportunity to examine them and go through the conversations is in Chapter 14.

Chapter 13 starts with an emergency landing on the ice-covered Maklu IV planet. Don't leave Milano too fast. Visit Rocket's cabin and find the Guardian Collectible inside. You'll have a conversation with Rocket which you can play out in any way you want. 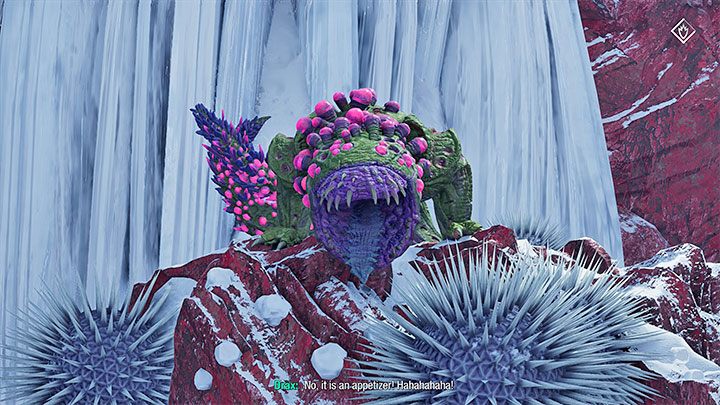 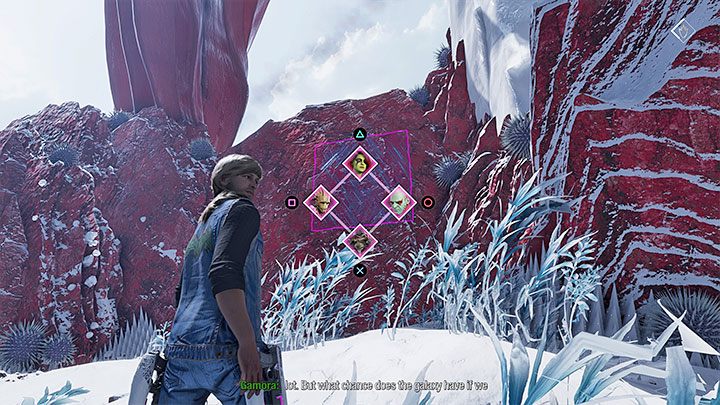 You'll have an opportunity to obtain this outfit right after the first battle against monsters (picture 1). It takes place shortly after you leave the wrecked ship and start exploring the planet's icy surface.

Stay in the area the battle took place and look for an interactive wall shown on picture 2. Order Gamora to attach to the wall. 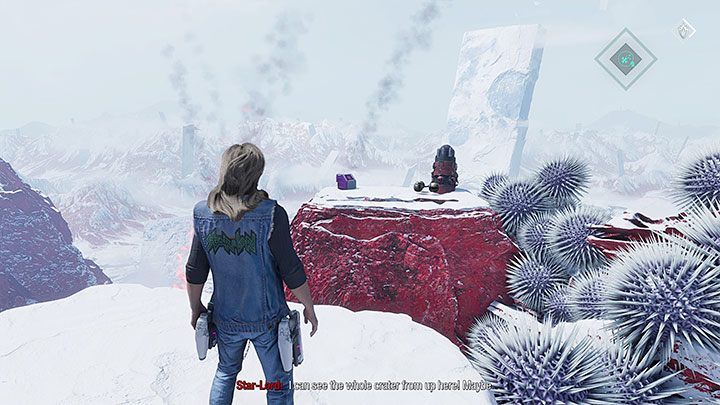 Jump towards Gamora and then onto the ledge above her. After climbing up, you should notice a chest containing the collectible on the neighboring ledge. Reach it with a double jump. 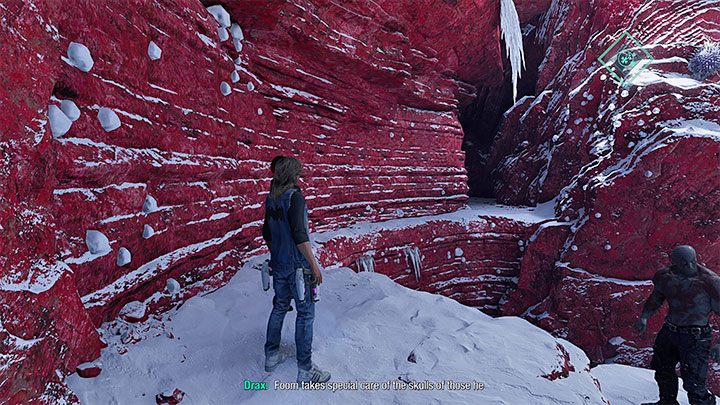 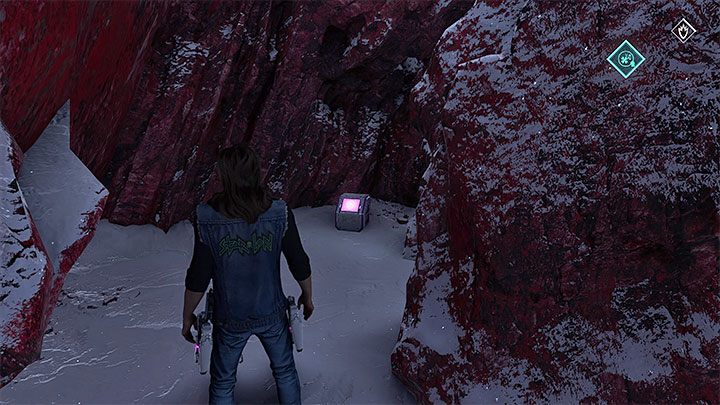 You can find this secret shortly after reaching the area shown on picture 1, where you must carefully walk along a narrow ledge above a deep chasm.

Once you reach a new area, examine the right corridor. After a while you'll reach an outfit chest (picture 2). 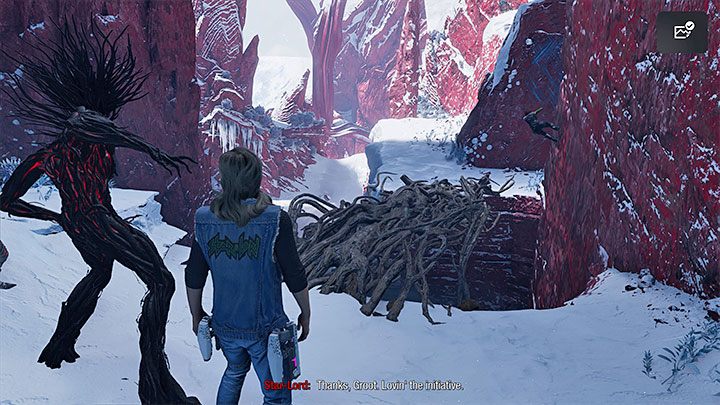 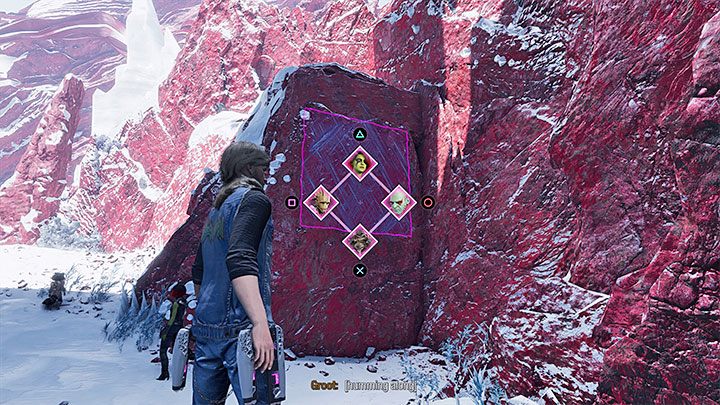 You can find this secret after a battle against a group of small monsters, when Groot creates a bridge without prompting him to do so (picture 1).

After using the bridge you should notice an interactive wall to the right (picture 1). Send Gamora there. 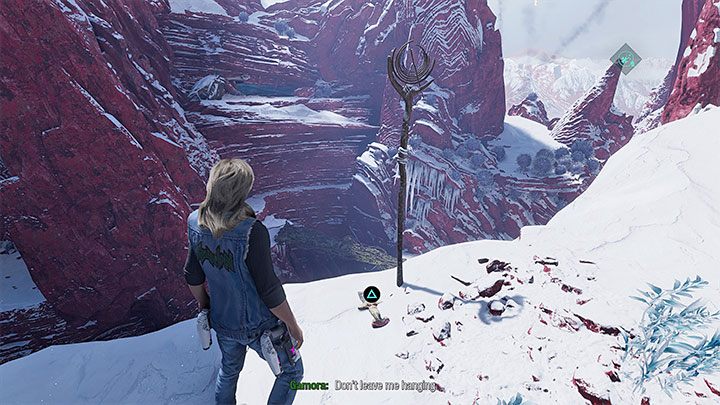 Just like you always do, jump towards Gamora and onto the upper ledge. Head to the ledge's opposite end. You'll find some generic loot and a broken blade - the collectible. 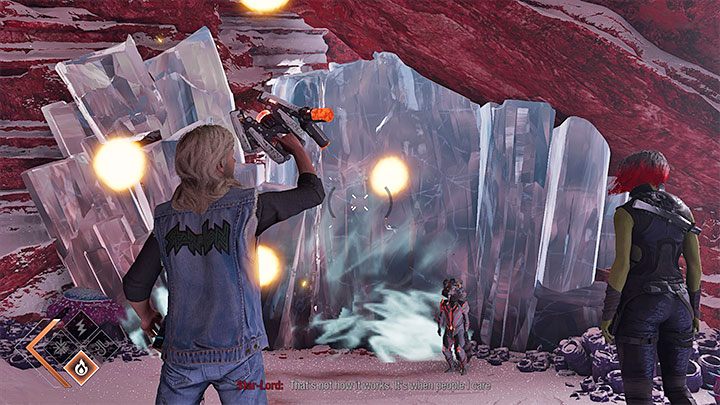 You'll find this outfit shortly after unlocking the plasma element, allowing you to shoot fire. The team will be forced to go through a cave pictured above, while using fire on ice barriers and icicles hanging off the ceiling along the way. 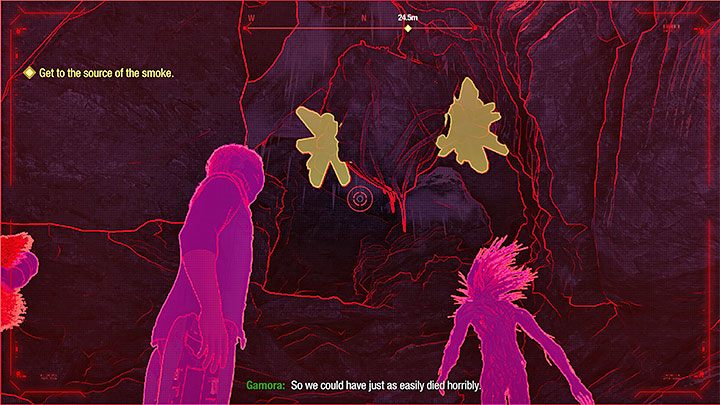 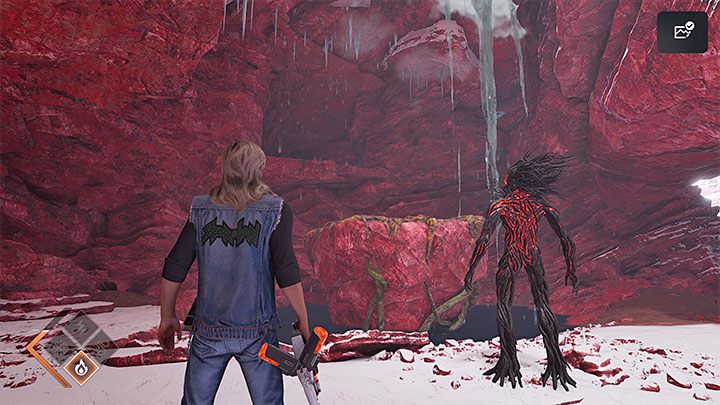 Reach the cave's final area but don't leave it just yet. Stop on the final ledge above a deep chasm. Look up. By using the vizor you should be able to spot two final icicles (picture 1).

Using fire on the icicles will lower the platform they were holding up (picture 2). 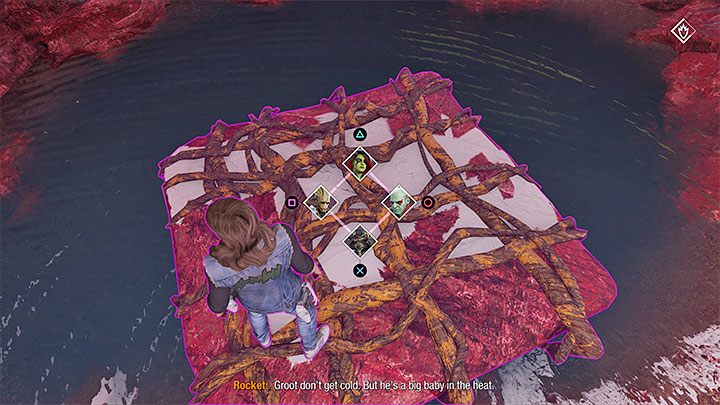 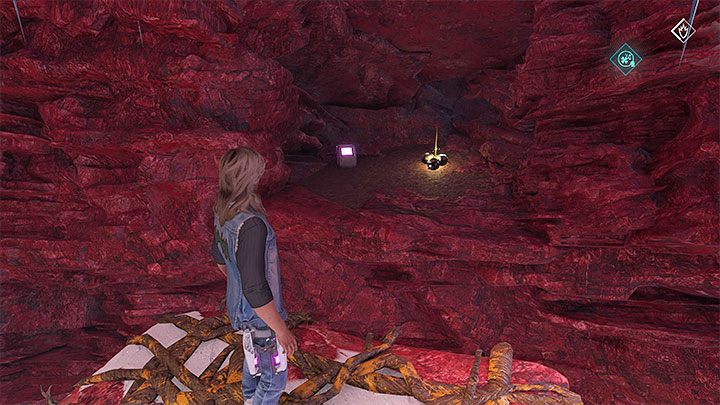 Jump onto this interactive platform. You can ask Groot to move it back up (with Star-Lord still standing on it).

Take a ride on the platform to find a stash shown in picture 2, containing loot and a new outfit. Reach it with a double jump.

Archives: The End of My Hunt 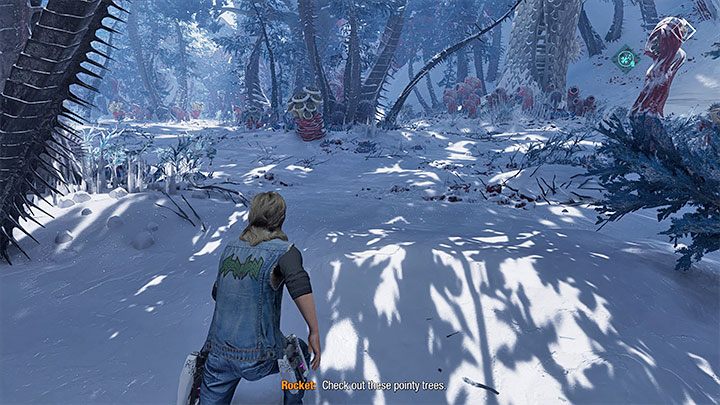 This is one of the three secrets obtainable after reaching the large area with spores you'll enter after spotting the first Wendigo in the distance. It's worth reminding that the spores start spraying poisonous gas when you get close, so you must destroy them from a distance by using plasma. 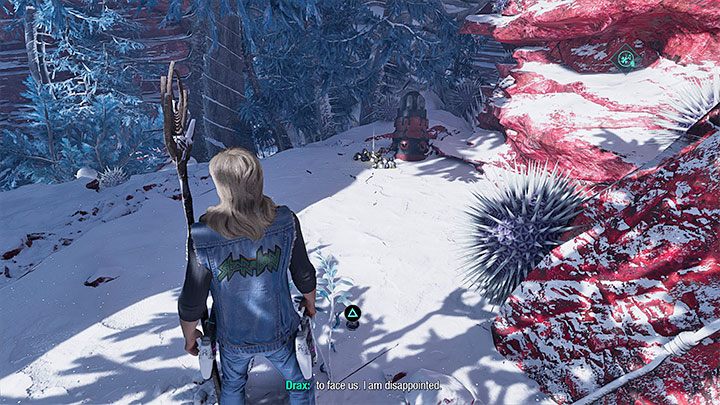 Examine the place where the exploration of the spores area begins. The collectible awaits on one of the higher shelves and is surrounded by spores you must destroy. 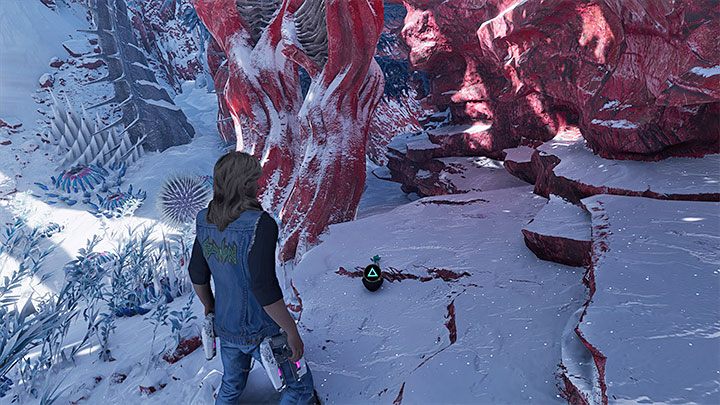 Once again, you must examine the beginning of the spores area. The secret lies on one of the rock shelves. 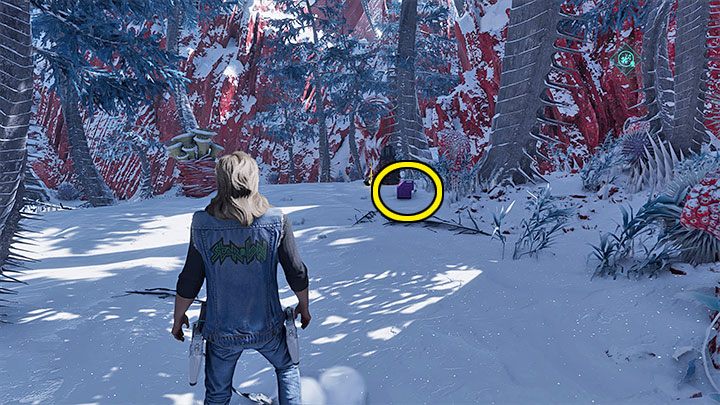 This is another secret that awaits in the same place, but to find it you must go a bit further into the spores area. Look around in the right side of the area and get rid of the spores before opening the chest. 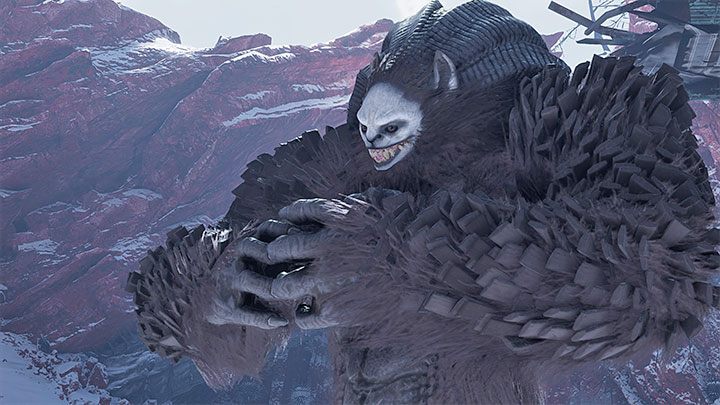 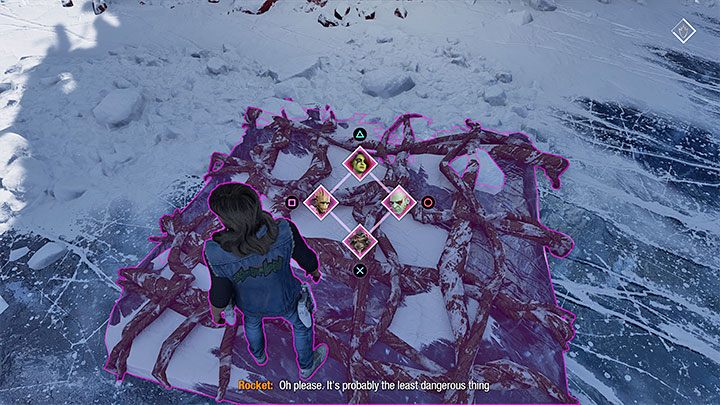 You'll find this secret after your second battle against the wendigo, the one featuring the monster herd's leader (picture 1).

After dispatching the monsters, stay right where the battle took place. Find the interactive platform shown on picture 2. Stand on it and ask Groot to lift it. 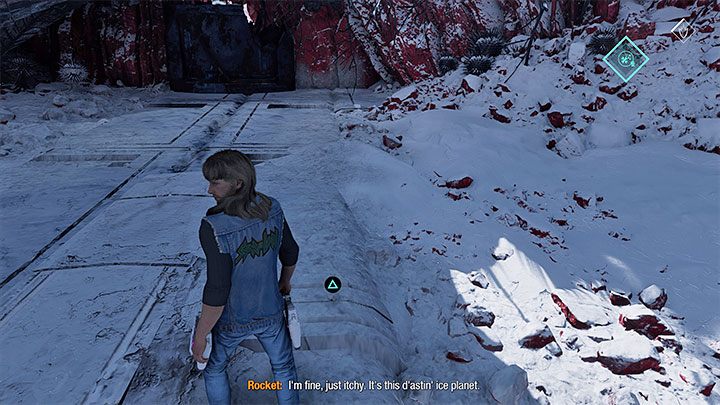 The platform will rise, letting you reach an elevated area near to where to battle took place. You'll find the collectible lying on the ground. 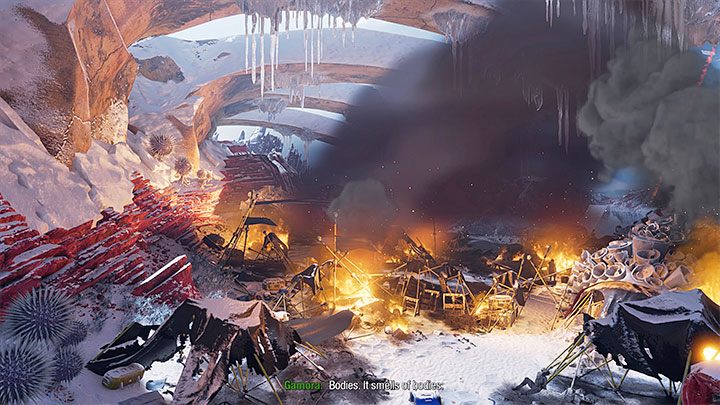 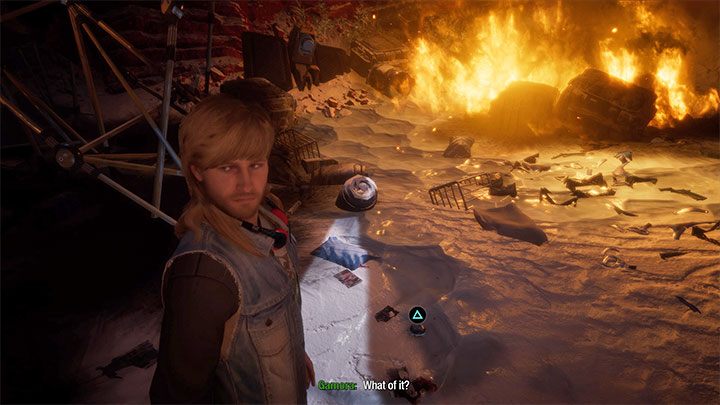 You can find this archive shortly after arriving at the burning campsite where you must talk to Ruby Thursday.

The secret is lying on the snow (picture 2), surrounded by burning objects in the camp area. 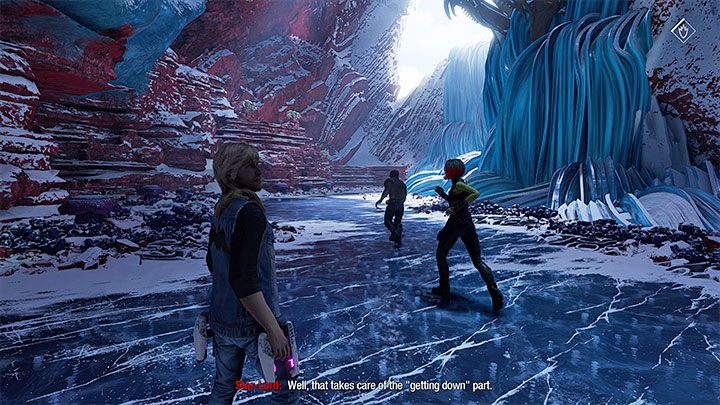 You can find this outfit after finishing the part involving sliding on ice. You need to reach the area shown on the picture above. There's ice here as well, but you won't be sliding when walking on it. 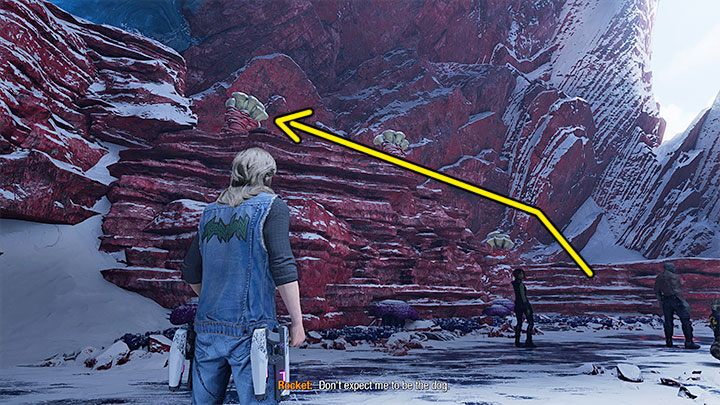 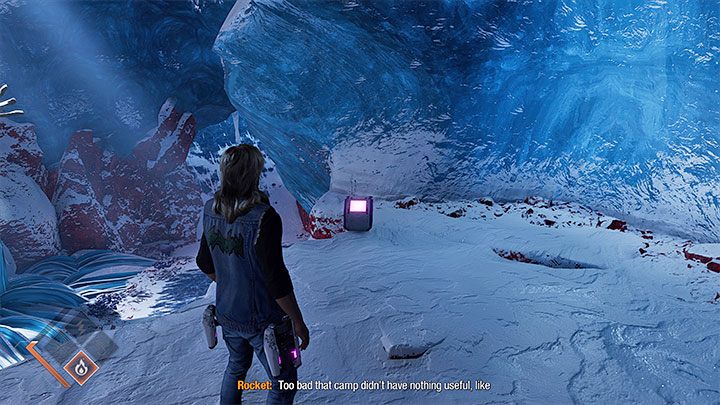 Don't follow the main path, as it leads to the lair of this chapter's boss. Take the upper-left path shown on picture 1 instead.

There are some spores here you should destroy with plasma attacks from a distance. Start exploring only after you take care of them. Reach the top to find the chest containing the outfit (picture 2).