This page of the Marvel's Guardians of the Galaxy game guide contains the beginner's guide, which has been written with players who are just starting out in the game in mind. We explain various important issues, including the intricacies of combat, exploring the environment and using the unique skills of each of the Guardians of the Galaxy.

Activate the abilities of your characters as often as possible 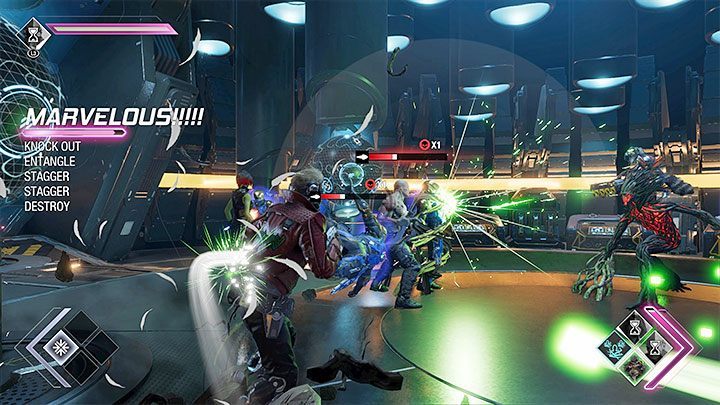 Each team member starts out with 1 unique ability and you will be able to purchase more with the points earned by gaining experience. You can select the ability via the drop-down menu (L1/LB) and it can be used for "free", but each of them has a cooldown. Keep an eye on it, as it will allow you to use a given ability as soon as it's off cooldown and becomes available.

The various abilities clearly differ from each other. Some of them are typical combat abilities (e.g. Rocket Raccoon's rocket fire), others involve weakening opponents (e.g. stopping enemies in their tracks with Groot's roots). Avoid using abilities completely at random. Try to use them strategically, for example, start with an ability that can stagger or immobilize enemies, then follow it up with a skill that deals significant damage. Specific offensive abilities can either be more effective against single opponents or groups of enemies.

On the Best abilities page, we advise you on which abilities you should be utilizing as often as possible.

In addition to abilities, make sure to launch special attacks 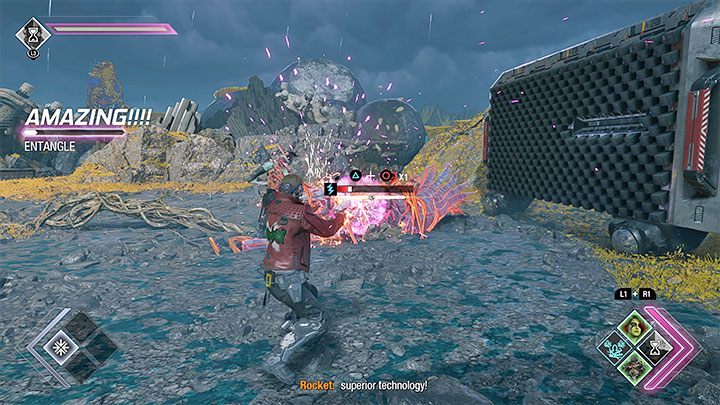 Special attacks come in different varieties. More often than not they require pressing a single button after facing an object that can be used by one of the Guardians of the Galaxy. For example, if there is a large boulder lying on the battlefield, there is a chance that Drax will be able to pick it up and throw it at his opponents. The advantage of special attacks is that they are separate from the abilities selected from the drop-down menu.

You can also try to launch finisher attacks on weakened opponents by pressing the two buttons at the same time. The button combination will only work if you are close enough to the weakened opponent, so make sure to approach them beforehand.

It's also worth noting that the game rewards you for using a variety of attacks, so you shouldn't limit yourself to just 1-2 of your favourite moves. By using different types of attacks, you can charge the momentum bar and gain bonus XP for winning particular combat encounters. 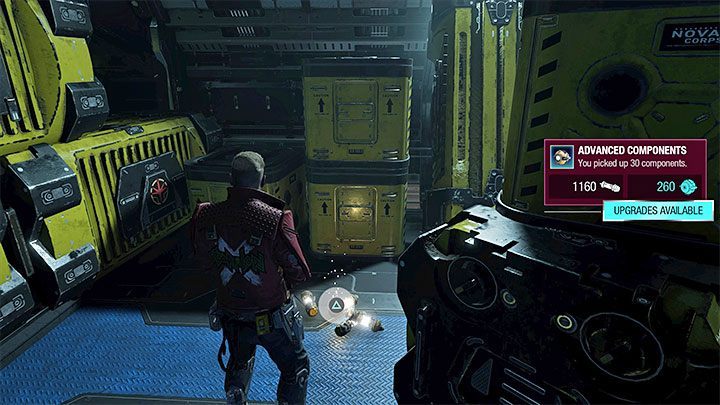 During your playthrough of the Guardians of the Galaxy, you should always keep in mind that you cannot go back to previously visited locations. For example, after going through a passage or initiating a particular encounter scene, the game might prevent you from returning to earlier areas. For this reason, you will simply need to search for interactive objects as you go along. Don't rush through locations unless the current mission objective requires it. In this game, there are 2 main types of collectibles:

In the Secrets and collectibles chapter of our guide, we describe the locations of all the secret items that can be found in the game.

Use the visor to explore and scan the area 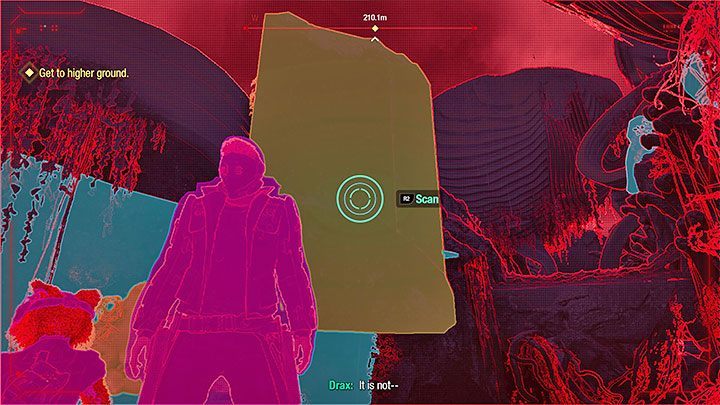 The visor is connected to the Star-Lord helmet and you can use it without any restrictions from the very beginning of the campaign. It provides an alternate viewing mode, which makes it easy to search the area and allows you to scan unique objects from the environment. Take a keen interest in the objects marked in yellow - this color indicates that you are able to interact with these objects in some way, for example, you might be able to destroy them or use one of the guardians' attacks/abilities on them.

It may also be an interesting idea to buy the Tactical Scan perk. It allows you to scan your opponents during battles, so you can easily learn their weaknesses to know which attacks to use against them. 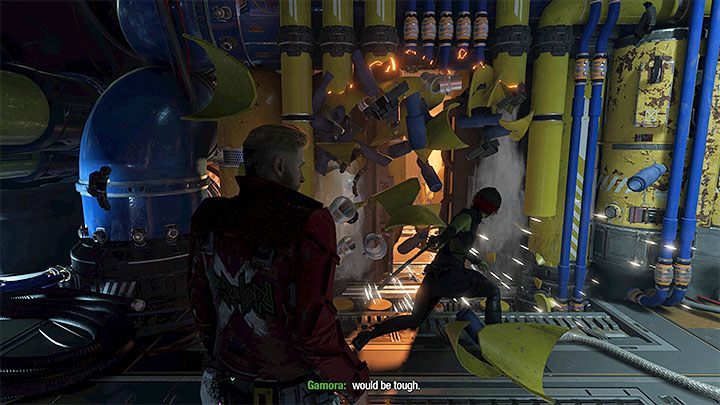 During the campaign, you can use the unique abilities and equipment of the characters to unlock more passageways. Make sure to look for them even when game doesn't require you to, because you will have the chance to discover many secret areas which may contain, for example, crafting components or collectibles. 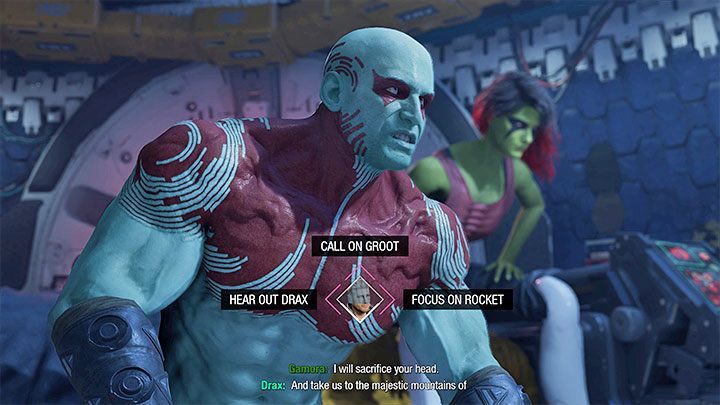 One of the unique elements of the Guardians of the Galaxy is that you will have to make different choices in the game, which occur during conversations with NPCs and in some of the cut-scenes. They fall into two main categories:

Unfortunately, the game doesn't notify you when you are faced with an important new choice. Moreover, you will often have a limited amount of time to choose what to do, which in turn makes it easy to make a mistake or select the wrong option. We recommend checking out the Important choices chapter of our guide, in which we have compiled all the important decisions and the consequences of your choices.

Make sure to dodge attacks and revive fallen comrades 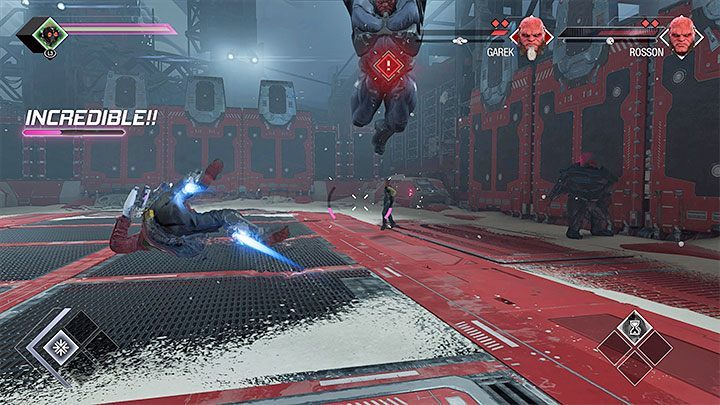 In almost every fight, it's crucial to avoid enemy attacks, both those in melee range as well as those made at a distance. The game doesn't give you the option to block attacks, but instead you can and should evade them. What's more you can unlock the Perfect Dodge perk, which allows you to slowdown time by dodging at the last possible moment and as a result you will find it easier to resume attacking.

In addition to maintaining your main character's health, make sure to react when one of your teammates is knocked out. You can revive a grievously wounded teammate by approaching them and holding down the interact button. There are no penalties for not helping someone, but you may lose the ally for the duration of the battle and you may be unable to activate their ability.

For more tips and tricks on the game's combat, check out the Combat and team management page.

Use Rapid Reload and Charged Shot 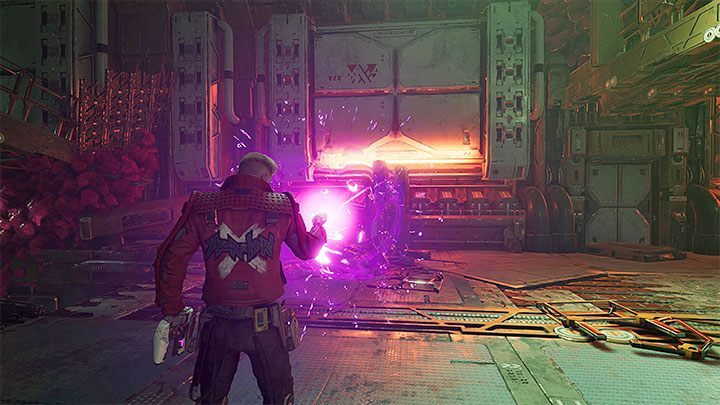 These are the names of two perks associated with blasters that is, firearms, which you will be using throughout the entire game. These skills are not initially available. You can buy both perks by spending crafting components at the workshop tables, and you should do this early on in the campaign.

You can customize and change the difficulty level at any time 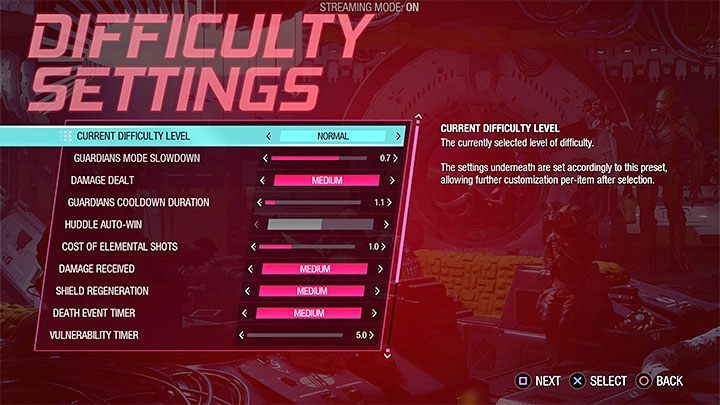 Guardians of the Galaxy features 4 basic difficulty levels. On the normal difficulty level, the game doesn't provide much of a challenge, with the exception of certain boss fights and some elite opponents, who require you to, for example, destroy their shield bar first. The hard difficulty level should be the optimal choice for most players.

Interestingly, you aren't limited to selecting the main difficulty level, because the game provides you with a variety of difficulty level modifiers. For example, you can set the attack strength separately for the playable characters and opponents, select the option to automatically succeed in QTE events, or change the ability cooldown speed. It's a good idea to experiment with the available settings.

You have the option to replay chapters, but it won't overwrite your progress 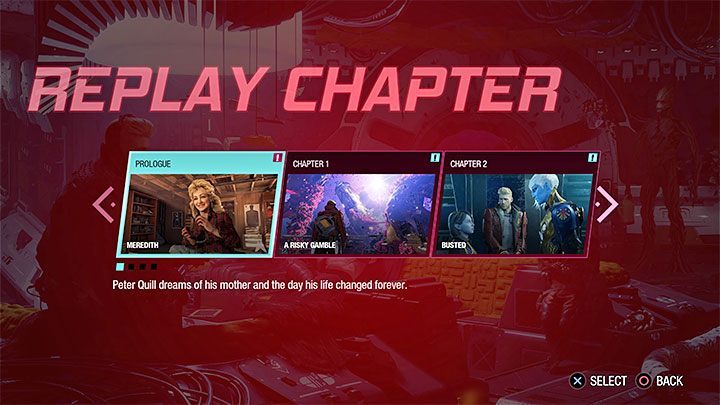 You can find the repeat chapters option in the game's main menu, but unfortunately, it has serious limitations:

The above limitations don't make the option to repeat chapters completely useless. You can use it, for example, to get trophies that require you to perform specific actions during fights. In all other cases, we suggest that you wait until you finish the game for the first time and unlock NG mode . During your second playthrough of the game, make different decisions and obtain the previously missed collectibles.