The Dark Pictures: Man of Medan's guide has an extensive walkthrough through which you will find a detailed description of each chapter. We have prepared detailed descriptions to tell you what you need to do, what choices you can make and how you can change your gameplay with even small moves of your character.

To help you navigate The Dark Pictures: Man of Medan, in our guide you will find a page where we describe all possible deaths. Take a look at this page to increase the chances of survival of your heroes. With this information you will know when to watch your every move and what decisions you do not make in order not to get your characters killed.

As you travel in The Dark Pictures: Man of Medan, you'll encounter collectibles - these are images and secrets. We have prepared a detailed description of each collectible to make it easier for you to find them and the achievements associated with them.

When creating our tutorial, we did not forget about the basics. You will find here the system requirements. This allows you to assess whether the game will work on your equipment and what to do to make it work better.

Another section in our guide to The Dark Pictures: Man of Medan is the trophy guide. There you will find a description of all available achievements. Thanks to this, you will be able to quickly and pleasantly get a platinum trophy and brag about it in front of your friends.

You have to remember that the way the story unfolds in The Dark Pictures: Man of Medan, depends entirely on your choices. In our tutorial, you will find the recommended path, along with various choices. If any choice affects the overall gameplay, we highlighted it and showed its consequences.

It is also worth noting that your decisions affect the relationship of the characters. The first dialogues in the game are identical, but later, they're influenced by your decisions. So at some point, we stopped transcribing the dialogues.

In the game The Dark Pictures: Man of Medan, there are three types of choices: the choices of the heart, brain and silence/doing nothing. If you want to save all the heroes, you can't take a single approach, like choosing only the heart. If you want to get the achievement - Consider all the permutations or Go with your Gut - you sometimes will have to be silent and avoid some choices. 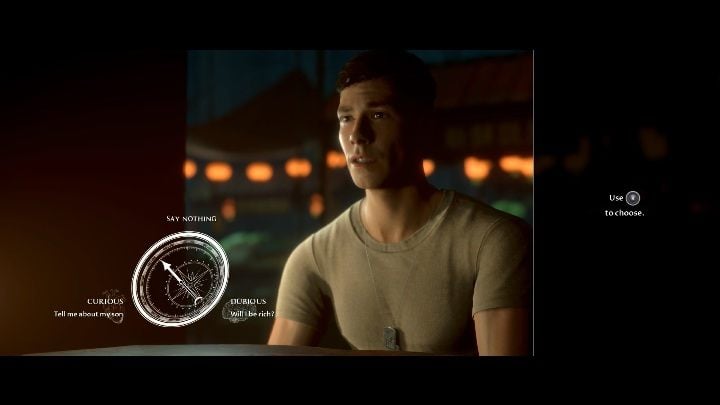 What is The Dark Pictures: Man of Medan? 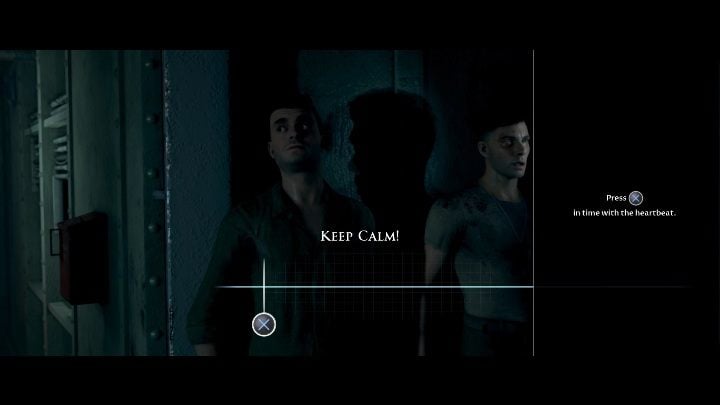 It's an adventure game with horror movie setting. The story focuses on a group of friends who reach a sunken wreck from the Second World War. There are plenty of choices in the game that will either make your life easier or ruin your plans. 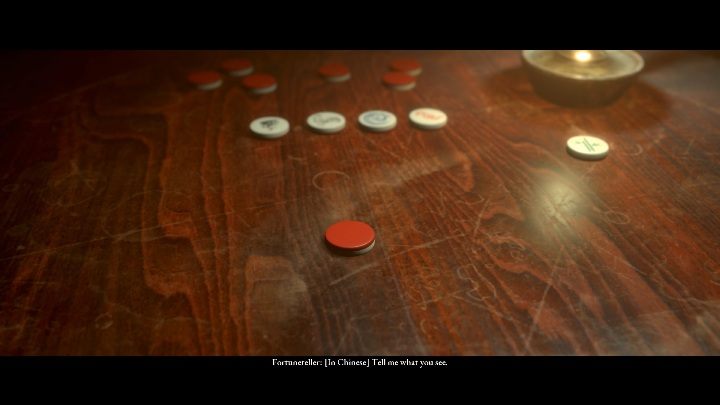 Man of Medan launches The Dark Pictures Anthology, a series of horror games from Supermassive Games. Each edition will be an independent story in the atmosphere of horror, unrelated to other parts of anthology, so that they can be completed in any order. 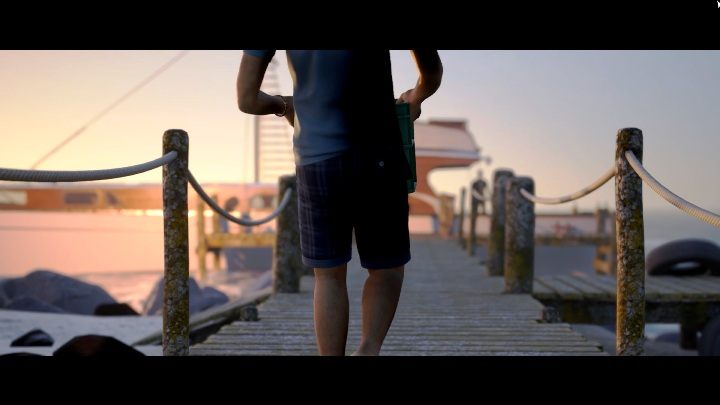 The Dark Pictures Man of Medan will be released on August 30, 2019. However, if you already want to purchase the game you can do it, for example, on the official website - https://www.thedarkpictures.com.

What platforms is the game available on?

The Dark Pictures Man of Medan is available on PC, PS4 and XBOX. In the case of the PC version, the game can be activated on steam.

What editions of The Dark Pictures: Man of Medan are available and what do they contain? 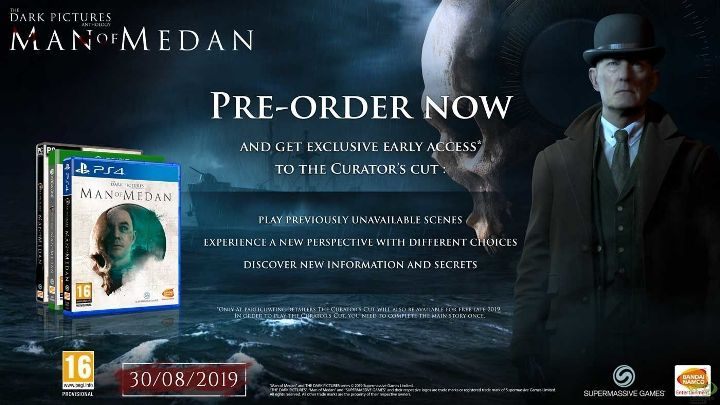 The Dark Pictures: Man of Medan is only available in the standard edition, with a price of approx. 120 PLN.

Does The Dark Pictures: Man of Medan have a cooperative mode? 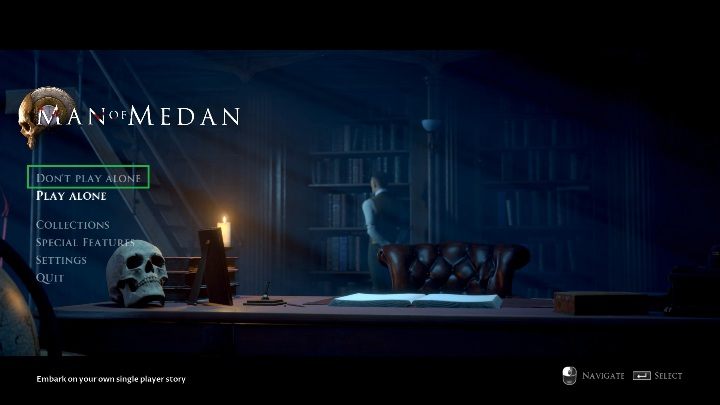 Yes, you can play this game with a person close to you. This will allow you to make choices together and save yourself from hostile situations.

What is Movie night mode?

This mode allows you to play in a team of five. In this mode, each player will play as a different hero. This allows you to explore the area together and discover the secrets of the old ship.

Characters available in the game

In the game you can control up to five characters - Julia, Bradley, Alex, Conrad and Fliss.

Can I save the game myself? 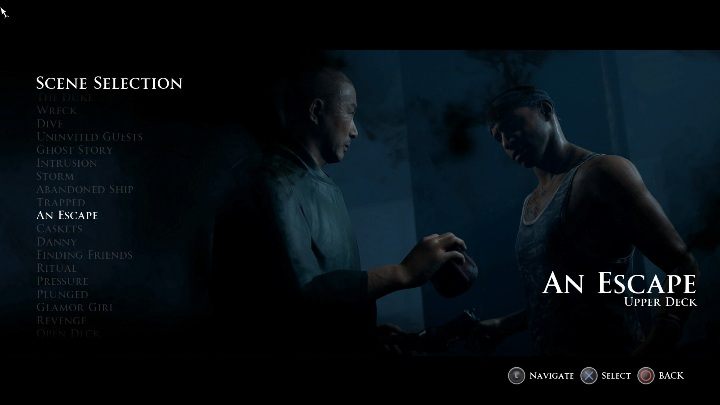 No. The game is saved every moment, or with each choice or move made. In this way, it prevents you from going back and fixing errors. However, if you want, you can, after completing the game, play each chapter and go through it again.

Can I play using the keyboard and mouse?

Yeah, sure. The game is designed so that you can easily complete it using the keyboard and mouse. However, if you are used to controls from Until Dawn it will be more convenient for you to play on the pad.

The Dark Pictures: Man of Medan is a game based mainly on cutscenes, making it not very demanding. To run it on your computer you need:

How long will it take to complete The Dark Pictures: Man of Medan?

The Dark Pictures: Man of Medan takes about 4/5 hours from start to finish. The game, however, has a lot of choices, different paths and endings. If you want to fully explore all the secrets of the game, you will have to devote about 40/50 hours to it.

To get all the achievements, you need to spend about 30/40 hours in The Dark Pictures: Man of Medan.

About The Dark Pictures Man of Medan Guide 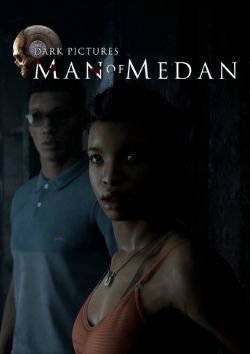 Man of Medan is a horror adventure game opening The Dark Pictures Anthology. The game tells the story of the discovery of a sunken wreck from the Second World War. The game is very non-linear and it is up to us who will survive and how the whole story will end.

Man of Medan is a horror adventure game. The production was developed by Supermassive Games studio, which is known for titles such as Until Dawn and Hidden Agenda. This is the first production of the band, which was released not only for PlayStation family consoles.

Man of Medan launches The Dark Pictures Anthology, a series of horror games by Supermassive Games, developed in collaboration with Bandai Namco Entertainment. Each installment is an independent story in a horror atmosphere, unrelated to other parts of the anthology.

The story begins when a group of four Americans who are fans of diving go on an expedition to explore a sunken aircraft from the Second World War. While the wreck is being examined, strange things begin to happen, and the frequency and strength of these events seem to grow with every object extracted from the water. What's worse, the heroes are additionally troubled by the incoming storm and the arrival of a mysterious ship.

Man of Medan is an adventure that focuses on telling an interesting story. In terms of gameplay, the game develops ideas from previous studio games. While playing, we deal with making choices, although there are also simple agility and logical challenges.

During the game we can lead five characters - four divers and additionally the captain of the boat on which they sailed to the wreck areas. History is very non-linear. Our decisions affect who will survive, who will die, and which of the many alternative endings we will get. The whole is designed to encourage players to go through the game many times in order to discover all the scenes and challenges prepared by the authors.