This page of the Mafia Definitive Edition guide contains a walkthrough for the Alien Infiltration side mission available in the Free Ride mode. You will learn how to change the time of day to night, how to prepare for chasing a UFO, how to rescue the alien inhabitants of the city, and how to shoot down the flying saucer.

Changing the time of day and preparing for the mission 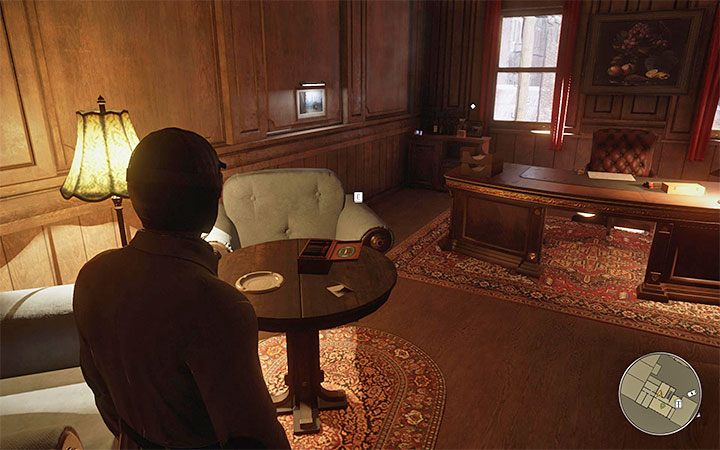 You can learn about this mission by finding Herbert Baskerville's letter in the Free Ride. The letter can be found on a round table in Salieri's office, on the bar's upper floor. This is the most difficult side mission in the game. 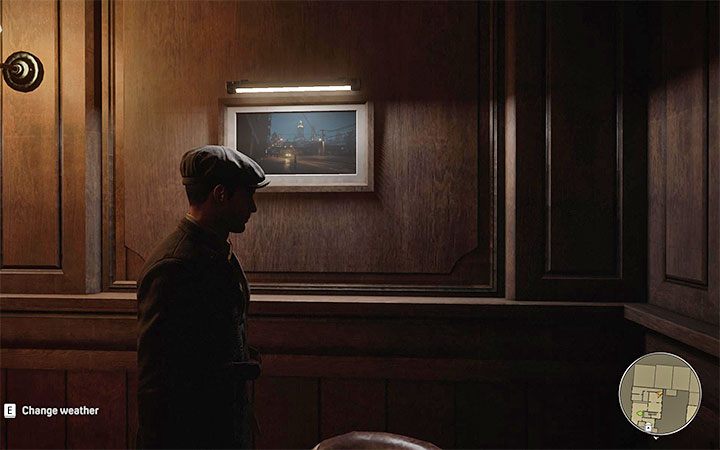 It can only be done at night. You can change the time of day during in Salieri's bar. Visit the conference room on the ground floor (the one where you had numerous meetings with Salieri and other gangsters during the story). There are paintings hanging on the wall of this room, and each one changes the time of day. Interact with the first picture from the right. 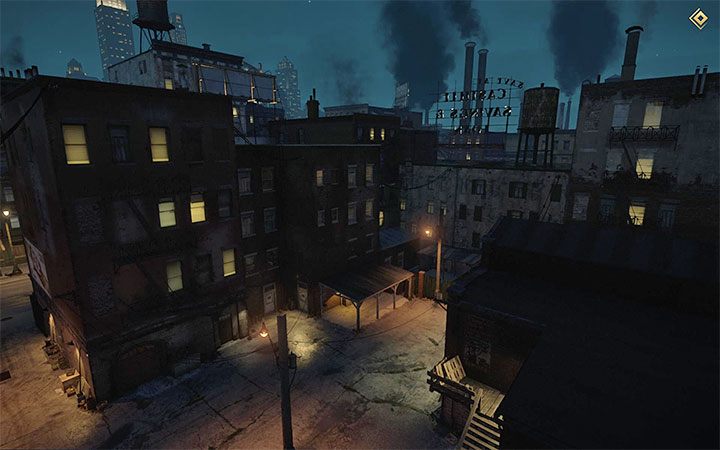 There should be a preview showing confirmation that the time is set to the night. 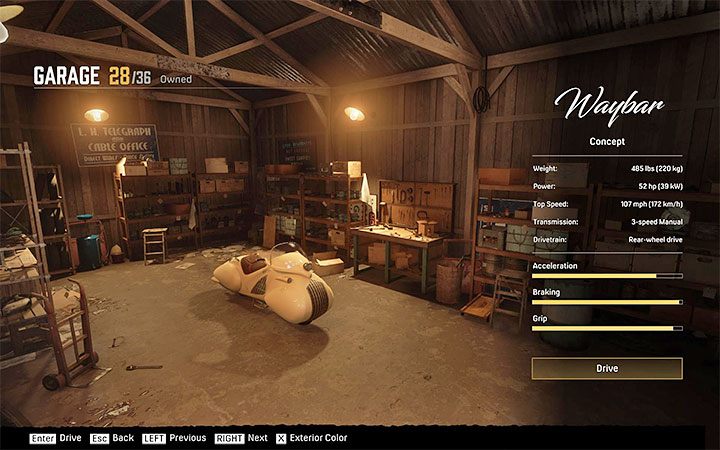 You should prepare well for this mission. Here is a recommended list of things you should do: 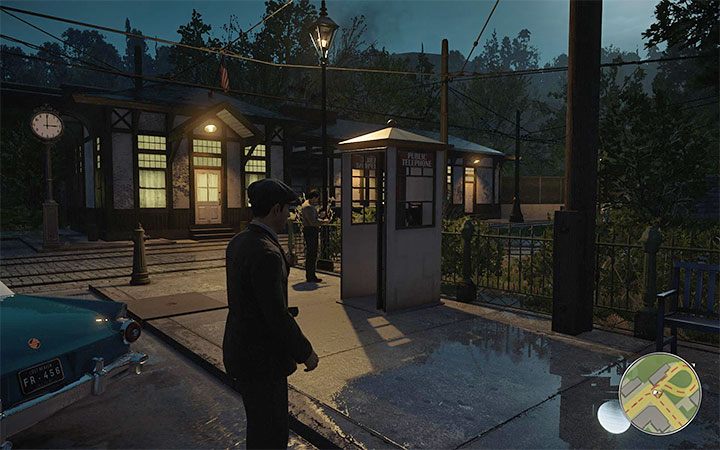 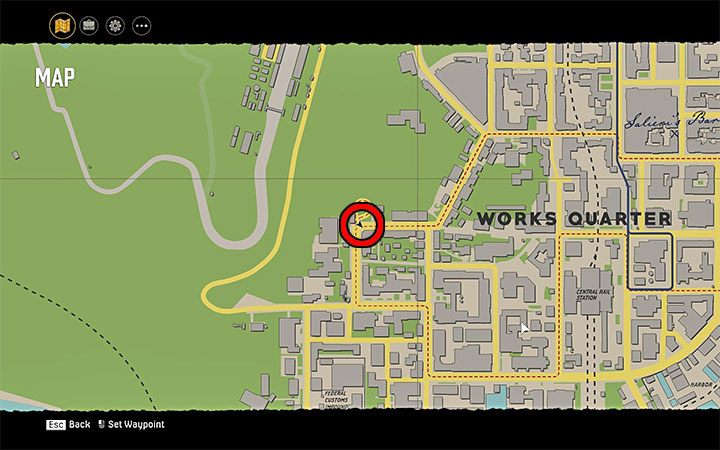 The mission starts in the tram depot shown in the above images, located in the western part of the Works Quarter. Park your vehicle as close to the phone booth as possible so you can start driving immediately after the mission begins. 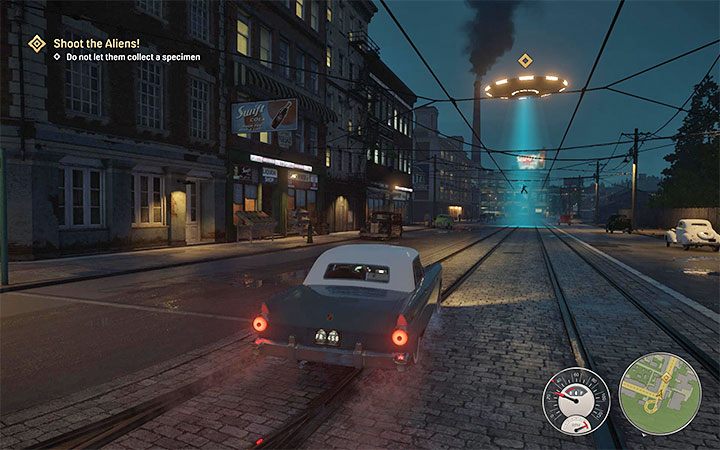 When the challenge begins, a flying saucer will appear over Tommy. Your job is to save the inhabitants from being kidnapped by aliens. The first hijacking will happen shortly after the mission begins. You must save the inhabitant before the UFO kidnaps that person. Otherwise, you will fail the mission.

To stop the kidnapping, take out the pistol and shoot at the flying saucer. One hit is enough, but you have to be close enough for the bullet to hit the target. However, don't get too close to the flying saucer, as you may have trouble aiming at it without getting off the bike or getting out of the car. This can make it difficult for you to continue the mission because after you hit the UFO, you will have to get back on your motorcycle or in your car  this can cost you precious seconds. 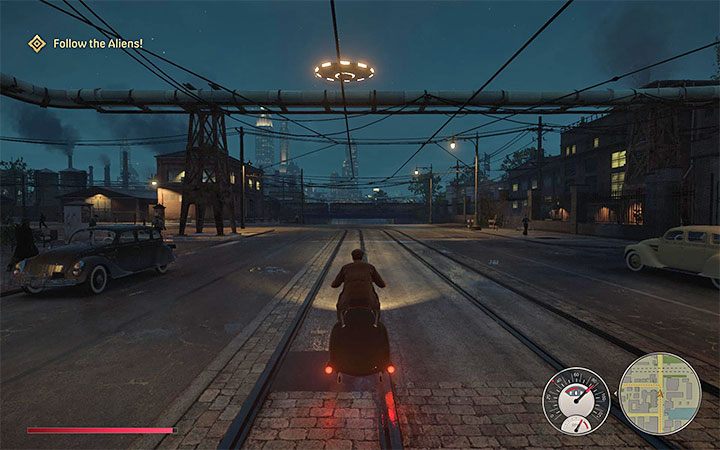 When you hit it, the saucer will start to move. You need to know two important things here: 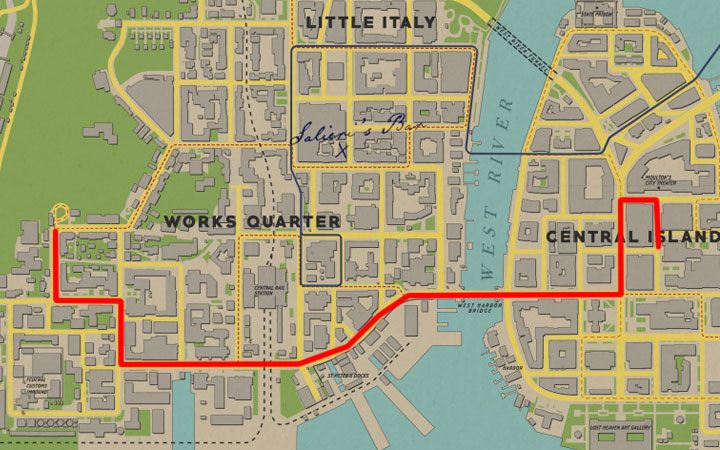 The second kidnapping will happen in the Central Island district. An example of the route is shown on the map above. 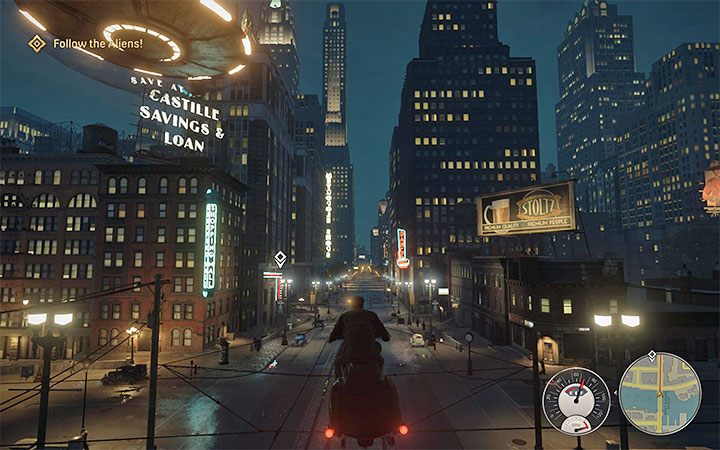 The most important part of the road to the Central Island district is a partially raised drawbridge. Try to drive as fast as possible to jump over the bridge. Fortunately, you shouldn't fall off your bike even if you make a very long jump. 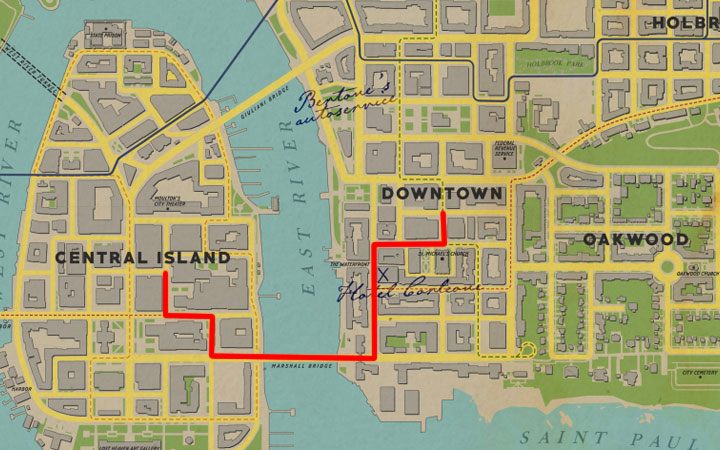 The third kidnapping takes place in Downtown. Again, you can use the suggested route from the image above. 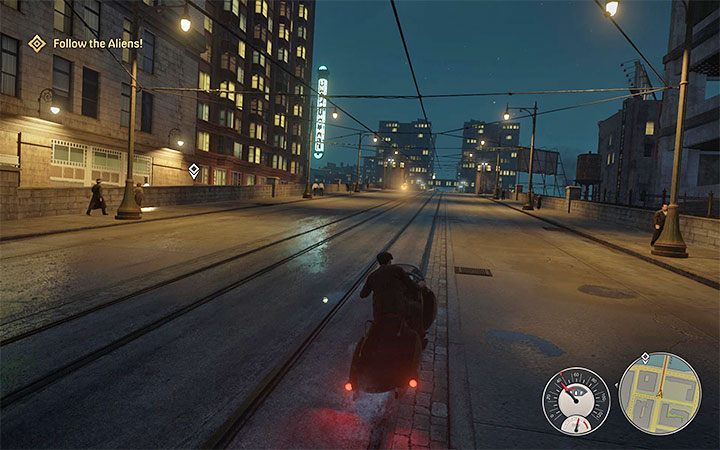 This ride can be very confusing if you choose to follow the flying saucer and having it in your view at all times. The UFO flies over the East River  Tommy has to use the south Marshall Bridge. 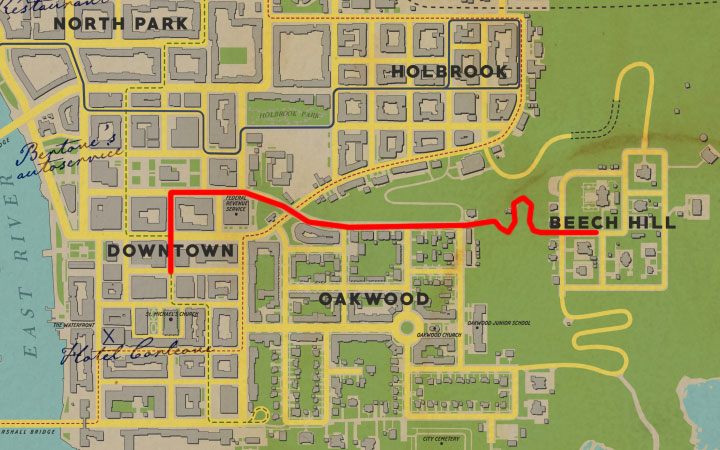 The fourth kidnapping takes place in the Beech Hill district. We have drawn the recommended path on the map. 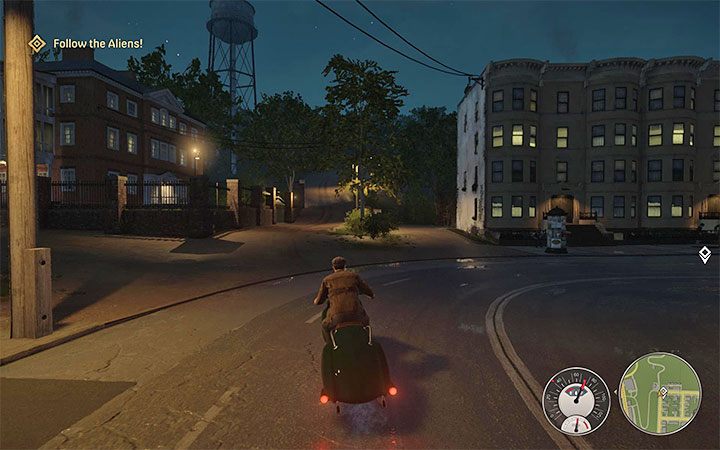 You need to remember two things: 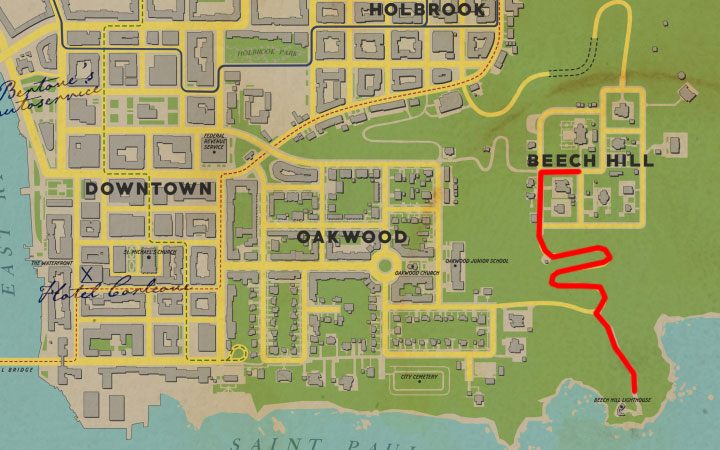 Now you have to ride quickly to the lighthouse. You don't have to rush as much as you did with the kidnappings. Soon, however, you will learn that you have 8 minutes to complete the mission. 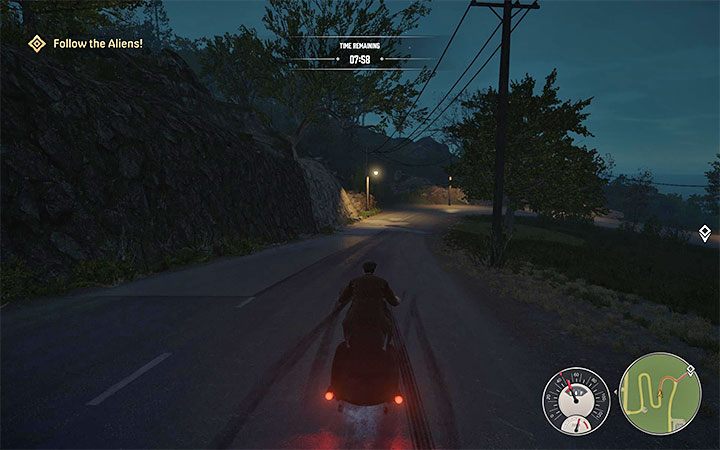 You have to ride the serpentines again, only this time on the southern side. Don't cut turns, especially when riding a motorcycle  you can fall easily and consequently lose more time. 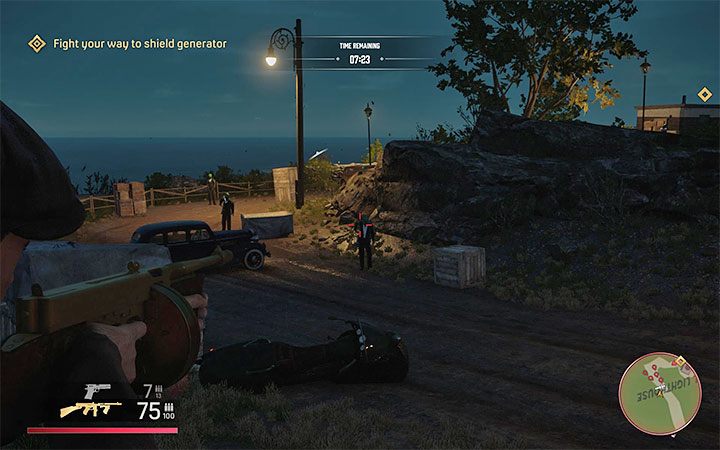 When you approach the lighthouse, you will have to fight gangsters with headgear resembling aliens. This battle doesn't stand out in any particular way, but remember that: 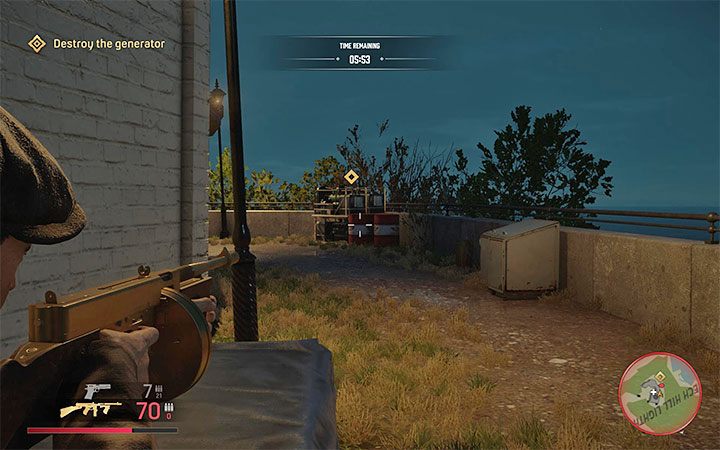 There's a generator near the lighthouse. Aim at the red barrels to destroy it. 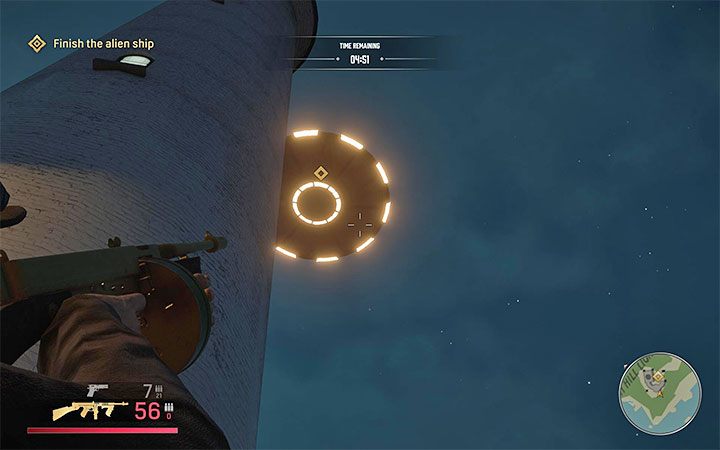 Lastly, shoot the flying saucer with any weapon. 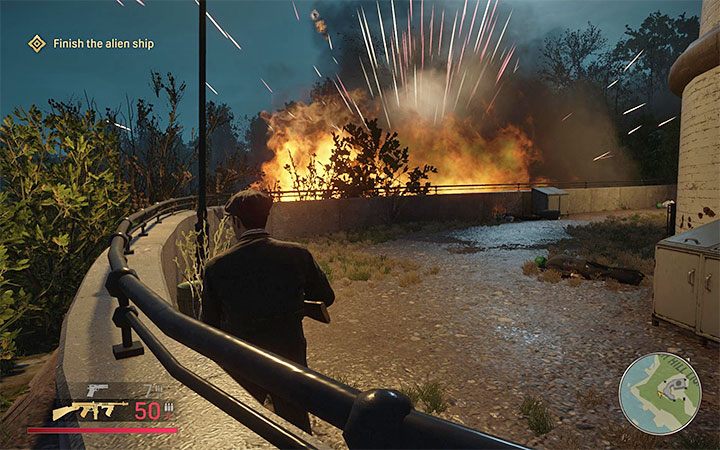 The UFO should crash next to the lighthouse. Watch a funny cut-scene starring "men in black". 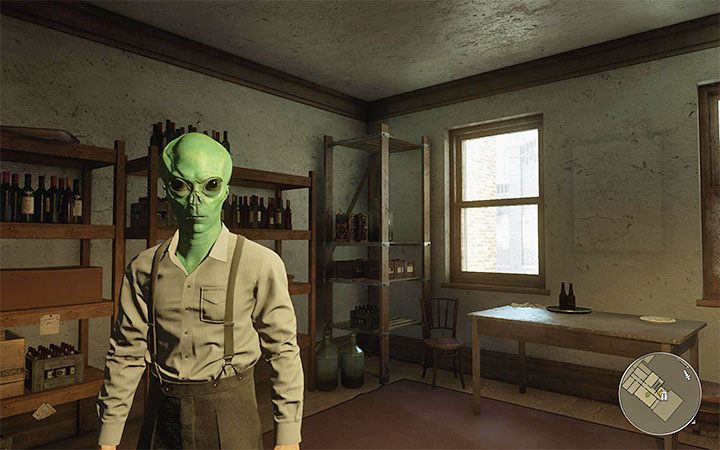 For completing this side mission, you will an alien outfit.