The following page doesn't contain any story spoilers. We don't reveal the course of the main story. Thus you don't have to worry about potential spoilers if you haven't played Mafia The City of Lost Heaven or if you want to replay the game after many years by launching the remake.

Despite the fact that 18 years have passed since the release of Mafia The City of Lost Heaven, Mafia Definitive Edition have many similar or even identical elements. Below we've listed the most important of them. 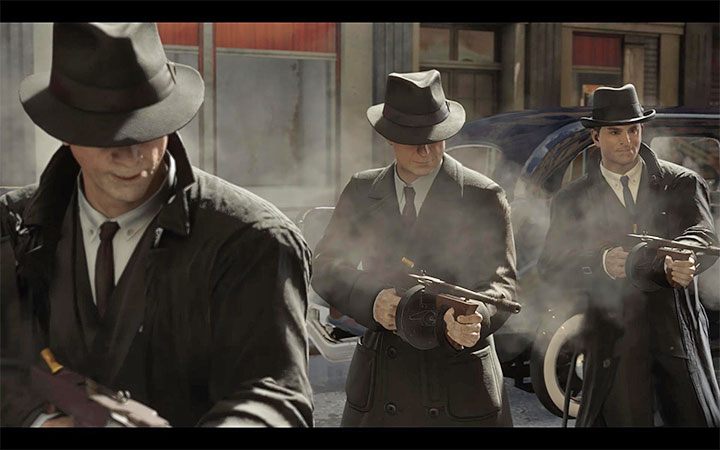 The remake of Mafia 1 does not change any events of the main story. Therefore, you can follow Tommy Angelo's actions from his unusual first contact with the Salieri family up to the moment he finds himself in a difficult situation. The way the story is being portrayed also didn't change in any way  it is presented in the form of flashbacks that are visualizations of the events told by Tommy.

Main characters of the story 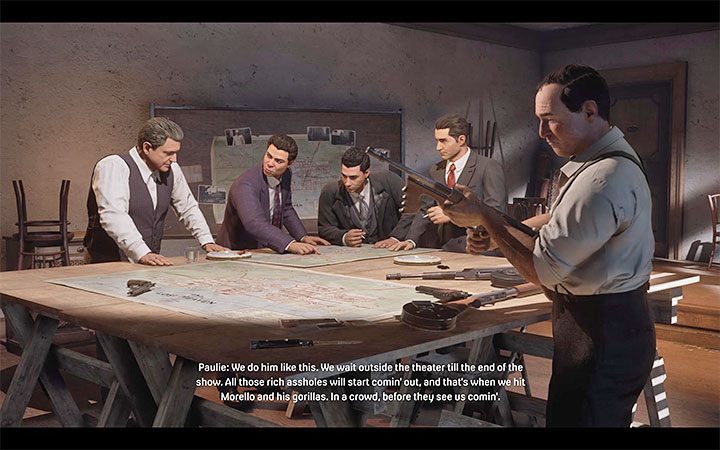 All known characters from the original appear in Mafia Definitive Edition. The most important of these is, of course, Tommy Angelo, who as in Mafia The City of Lost Heaven is the only playable character.

The City of Lost Heaven 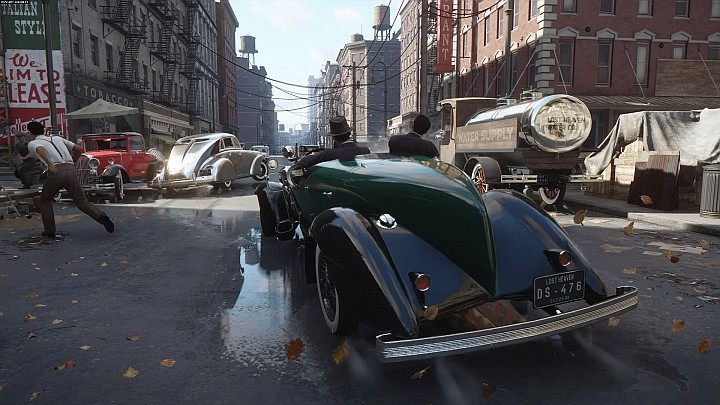 The action of Mafia Definitive Edition takes place in the same location, that is, in the fictional American city of Lost Heaven based on Chicago. It is a fairly large metropolis divided into such neighborhoods as Chinatown, Little Italy, Downtown, Hoboken, and Beech Hill (formerly Oak Hill). Remake includes all locations known and liked by the players, and in the vast majority of cases they are situated in the same areas as in the original version.

The authors have also retained the original time frame  the game's action takes place in the 1930s, during the interwar prohibition period. A great deal of effort has been made to faithfully reproduce the presented timeline. 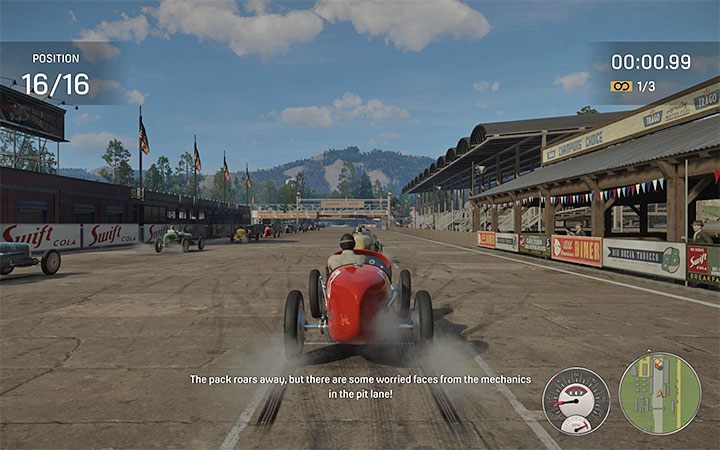 Mafia Definitive Edition features the infamous Fairplay mission in which you take part in a car race. As a reminder, in the second part of this assignment, Tommy learns about the broken arm of a driver supported by Don Salieri and is forced to take his place in a race car.

We have described in detail how to win the race on a separate page of the guide. Fortunately, with numerous assists and the option that allows you to choose the driving model, this should be much less demanding than the original mission, which made it impossible for some players to continue playing due to the high difficulty level.

Mafia Definitive Edition has a prologue that was based on the original and features a well-known musical track. Just like in Mafia The City of Lost Heaven, during the intro you can observe different areas of the city and get a better feeling of the game's atmosphere. 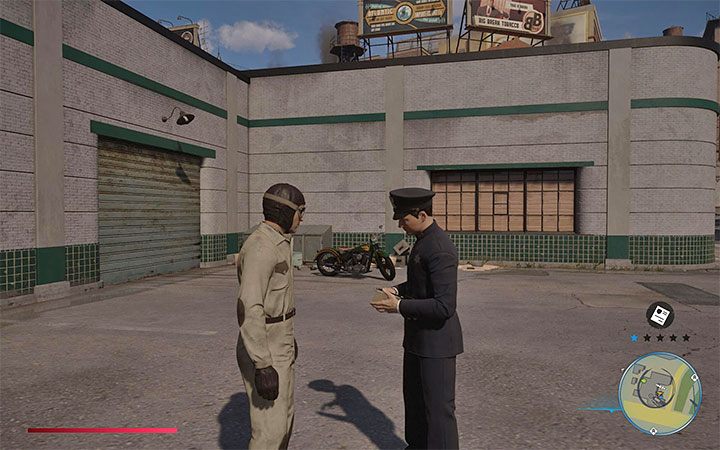 Speed limits known from the original version of the game return in Mafia Definitive Edition. This means Tommy could find himself "in the crosshairs" of law enforcement if he is caught speeding. Fortunately, the Remake includes a speed limiter known from the original, which prevents you from exceeding the legal speed limits and allows you to travel without risking a traffic violation.

The law enforcement officers may also respond to other inappropriate player behaviors, such as running through a red light or walking through the city with a gun drawn. 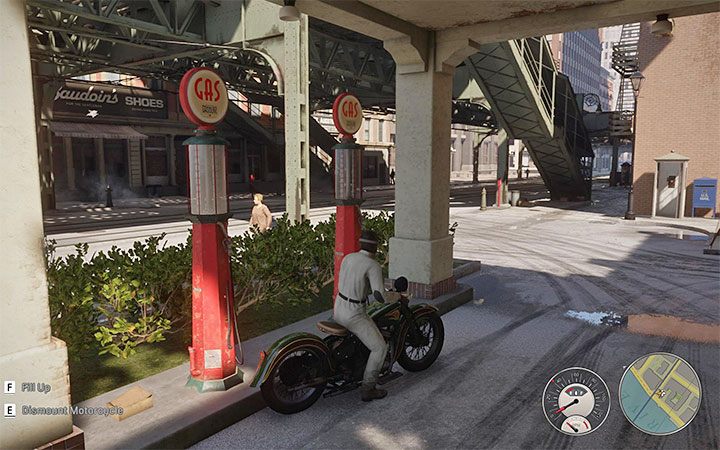 As in the original you can see the speed and fuel indicators while driving the car in Mafia Definitive Edition. The speedometer helps you stay within the speed limits, and the fuel level indicator helps you determine how long you can use a vehicle. There are gas stations where you can refuel your car. 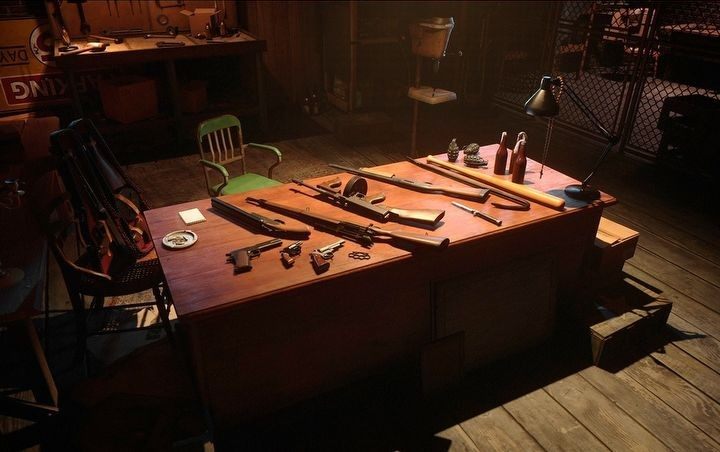 Mafia Definitive Edition allows you to play on the classic difficulty level known from the original version of the game. User interface is more minimalistic on this difficulty level, enemy attacks inflict more damage, and the police officers are less forgiving. An interesting impediment is also the fact that the classic level of difficulty does not allow you to recover the ammunition lost while reloading weapons (before the weapon's magazine gets completely exhausted).

Mafia Definitive Edition allows players to play new difficulty levels so that each player can match the level of challenge to his or her own preferences. 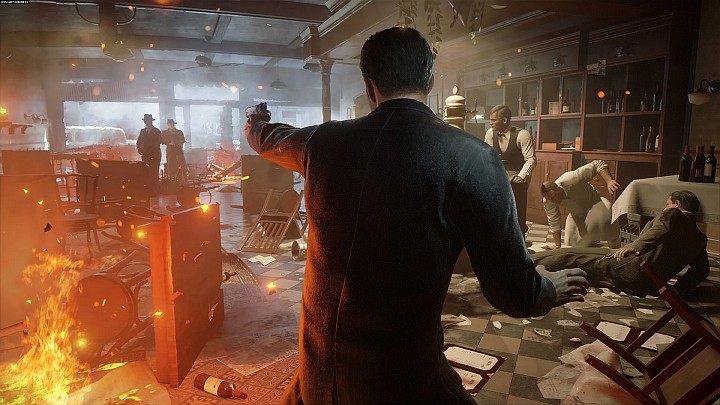 In Mafia Definitive Edition, the health bar doesn't regenerate itself. An exception to this rule is the recovery of a small number of health points after being on the verge of death. This auto-healing effect is minimal  Tommy can still die very easily.

Fortunately, you can find first aid points to recover much of the lost health.

As in the original version, Mafia Definitive Edition doesn't have any multiplayer modes. It's a title that has an entirely solo gameplay. You don't need to have an active PS+ subscription to run the game, but you can connect the game to your 2K Account. 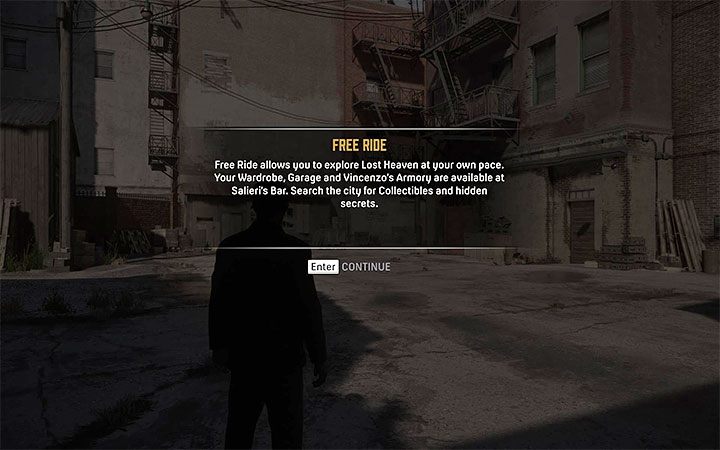 This mode is known from the original Mafia 1. In Free Ride mode, you can freely explore the game's world. In addition to learning about interesting locations, you can, for example, look for secrets, or do optional challenges (Time Trials, firefights, etc.).

Mafia Definitive Edition is a remake and this means that the authors of the new version of Mafia 1 have changed a lot of things. Most of these elements are designed to make the gameplay more friendly for modern players. However, the remake has a bunch of brand new attractions to offer. Below we have prepared a compilation of the most important changes and brand new features that were implemented in the game. 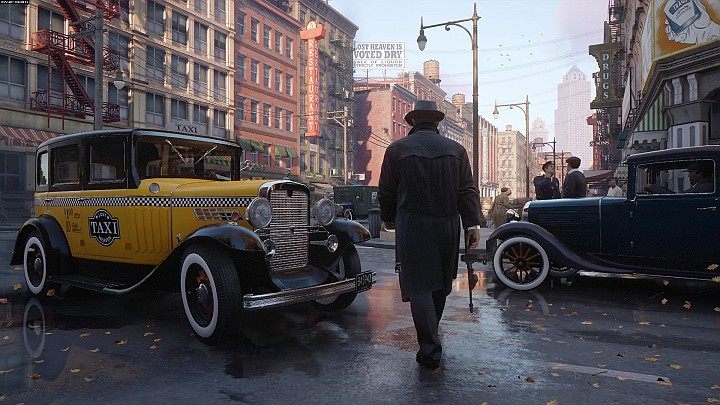 The most important enhancement of Mafia Definitive Edition is the shiny new graphics that meets the requirements of today's standards and makes the game look incomparably prettier than the 2002 original. Mafia Definitive Edition runs on a modified graphics engine that was previously used to produce Mafia 3. Most of the visual content got updated and modified, namely: city's appearance, character models, lighting and textures, animations, particle effects, or advanced weather effects.

Some story missions were modified in Mafia Definitive Edition in comparison to the stages known from the original version. These are not huge changes and do not have a strong impact on the events of the original story, but they may be noted by fans of the original game. A great example of a modified story mission can be the A Trip to the Country mission, in which the chase that occurs in the final part of this task was slightly changed. Just For Relaxation mission is also different from the one in Mafia 1  the similarities end when you get the truck.

Updated appearance of some important characters 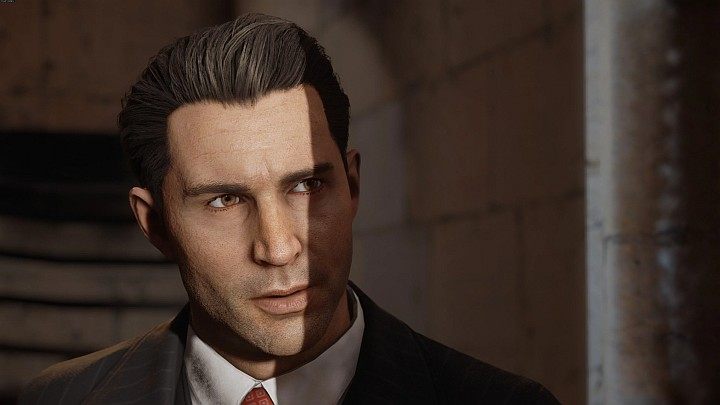 Mafia Definitive Edition features entirely new models of the main characters and antagonists. All main characters  Tommy, Paulie, Sam, or Salieri  look slightly different from the original. It is a change that some players who praise the original have to get used to. The characters also received new voices  a completely new voice dubbing & voice acting has been prepared for the remake.

Mafia Definitive Edition contains some entirely new cut-scenes and dialogues. The aim of these is only to expand the story background of the game. These don't change the events of important scenes or meetings between important characters of the story known from the basic version. 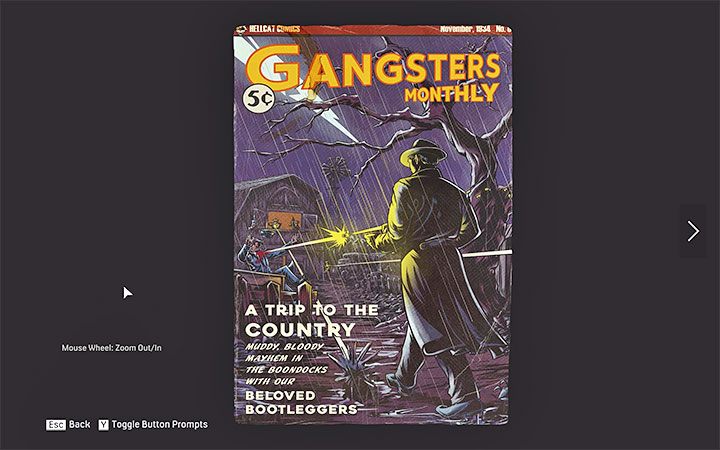 In addition to side missions, the Remake also allows you to find collectibles and discover some secrets. There are several different categories of collectibles such as, for example, comic books or collectible cards. Secrets can be found in different parts of the city  the more time we spend on additional exploration, the more we can find. The game allows you to examine all items added to your collection. 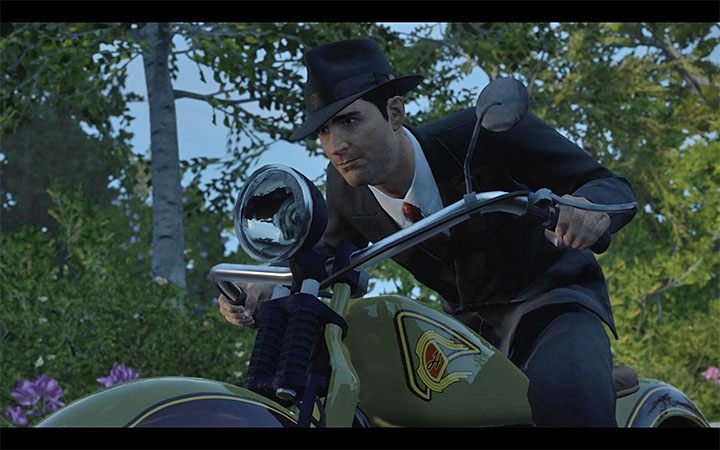 Motorcycles, that were completely absent from the original game, appear in the Mafia Definitive Edition. Tommy can use a motorcycle to travel around the city instead of driving a car or a truck. The authors created a separate driving model for the motorcycles in order to make the experience of riding them more realistic.

How to get a motorcycle has been described in more detail on a separate FAQ page. 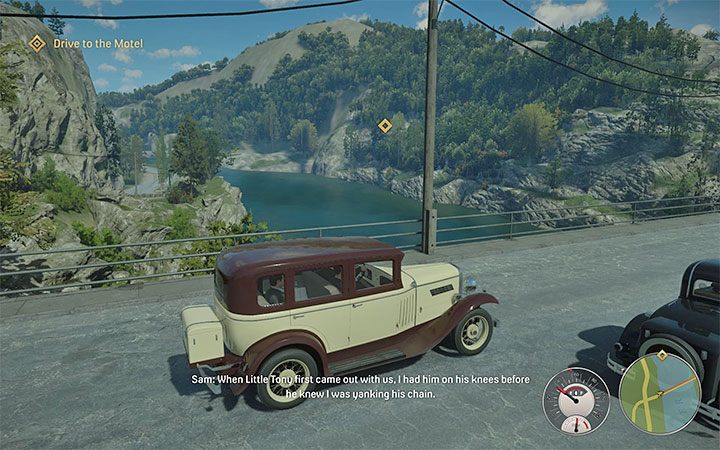 The city of Lost Heaven in Mafia Definitive Edition has undergone a number of minor and major modifications. All major and iconic locations remain in the same places and look very similar.

The changes mainly concern the non-urban areas. For example, the racetrack and the airport are now in slightly different places on the world map. The airport is also larger than the one known from Mafia 1.

Mafia Definitive Edition allows you to use a minimap that can be seen on the screen at all times. It is able to make travel on the designated route significantly easier, as you do not need to check the map of the entire city at regular intervals. It is worth noting that players who prefer classic solutions can disable this option. 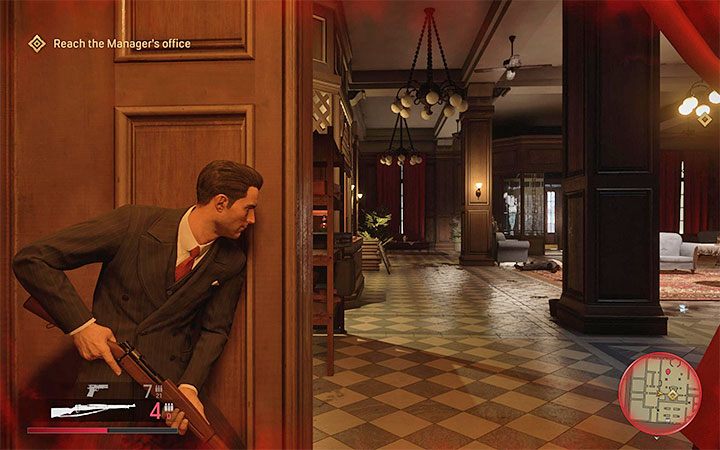 Mafia Definitive Edition offers a cover system that was not included in the original release of the game. It should make fighting against opponents much easier, as unlike the 2002 game, you don't have to stand in the open space or look for ways to lean out from behind a wall and other large objects. However, the presence of covers shouldn't make the game much easier, as more opponents may appear in the shootouts and most types of cover can be destroyed.

Mafia Definitive Edition features a new soundtrack. The soundtrack was created from a scratch, and the licensed tracks from the 2002 game were replaced with others (the only exception is the track played during the game's prologue / intro). Mafia Definitive Edition also has radio stations and we can listen to music and various radio shows while traveling in vehicles around the city. 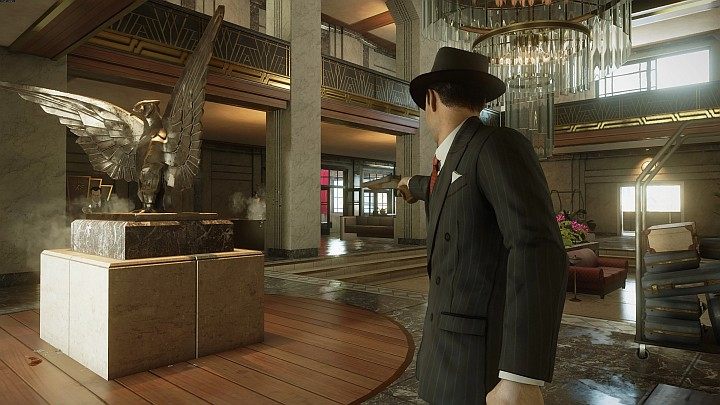 Mafia Definitive Edition is a much more enjoyable game than the 2002 original, which featured a fairly high level of challenge. The Remake primarily allows you to choose one of several difficulty levels to match the gameplay to your own abilities and tastes.

Mafia Definitive Edition includes tutorials describing the most important gameplay mechanics, as well as a multi-step aiming assistant that can be especially helpful for people who prefer to play the game on a gaming controller.

A rather significant change is the fact that Mafia Definitive Edition does not have any loading screens when we travel around the game world. They no longer appear when we leave the city of Lost Heaven in order to get to the countryside.