On this page of our guide you can find a set of tips on how to win a car race in Mafia Definitive Edition. We have prepared general advice on how to control a race car, as well as the description of the race track located in Lost Heaven.

When does the race take place?

The car race in Mafia 1 Remake takes place in the final part of the 5th story mission  Fairplay. The race will start after you steal the race car of your rival's team and deliver it to Lucas Bertone's garage in order to sabotage the vehicle. If you need help or have any sort of issues with completing previous tasks of this stage, please check our story walkthrough in which you can find a detailed description of Mission 5.

Shortly before the start of the race, Tommy will find out from Frank that the previous driver hired by Salieri was beaten up by thugs of Morello family. The main character will be forced to replace the injured driver.

The car race has three laps to complete and you have to win it. You start the race in the last 16th position and within 3 laps you have to reach the 1st place and keep it until the end of the competition.

Should I make any special preparations for the race?

No, but you can lower the difficulty level before you start the race. It is also advisable if you tried to finish the race and did not manage to win it. Pay particular attention to the Driving Mode option in the game settings. The car used in the race will be much harder to drive and skid more often if you have the simulation mode enabled. By using a standard driving model, you should be able to control the vehicle much more easily.

Can you skip the race? 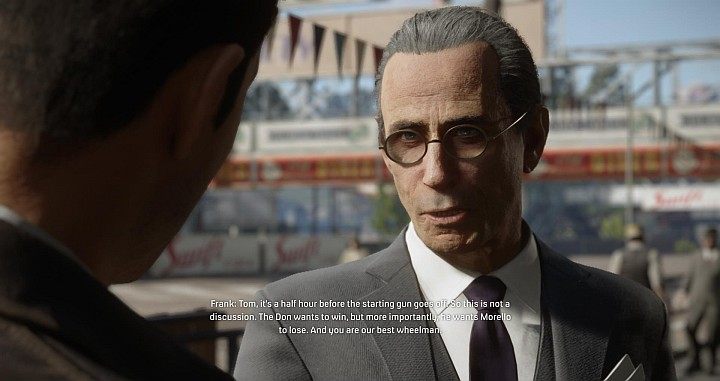 Unfortunately, Mafia Definitive Edition does not allow you to skip or lose the car race from the fifth main mission  Fairplay. This is justified in the plot  even before the race begins, you learn that Don Salieri has bet big money on the victory of a vehicle driven by Tommy.

The Race - map of the racetrack 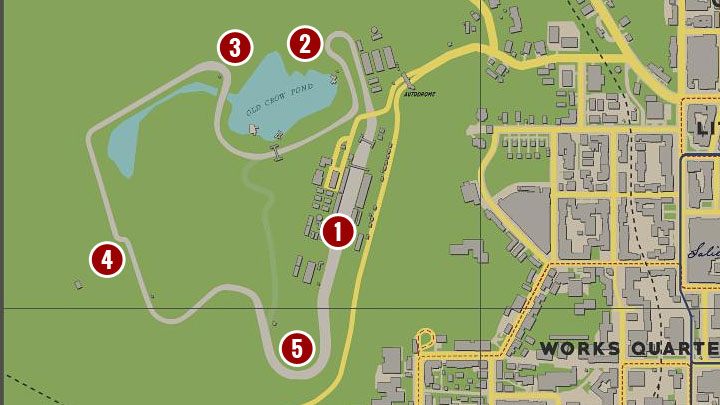 The picture above shows the racetrack, which is located in the western part of the world map. Several points are visible in the pictures - references to them can be found later in the text, that is, in the description of the race.

The Race - General advice and walkthrough

After the race beings (Point 1 on the map) start gaining speed. Don't try to overtake other drivers right away  opportunities to overtake your rivals will come with time and you can't get into the lead after a few turns.

Focus on the flawless braking before the first sharp turn (point 2 on the map). It is the sharpest turn on the entire track. If you drive too fast you may fall into the gravel and crash or lose a lot of time. Skilful braking will be even more important at this point over the next two laps. By reaching this sharp turn you will gain even more speed.

The next two turns are relatively smooth and from this point on there will be opportunities to attack other drivers of the race. Try not to collide with them. Instead, look for opportunities to slow down later and squeeze through the inner side of the road.

After taking the next left turn you will reach the chicane (point 4 on the map), which is probably the most insidious part of the track.

Don't try to cut it too much, as there is a good chance that your machine will crash on the grass of the right side of the track's surface. This can easily lead to an accident or a large skid. Of course, it's worth beating the chicane by maintaining quite a high speed, but don't overdo it with taking a shortcut or by aggressively driving through the bumpy slowdowns.

The next two turns are quite easy to drive through. The last corner (point 5 on the map) is the second turn with a large slope of the track. It's a longer bend, so you don't have to focus too much on staying close to the inside lane of the track. Try to stay in the central part of the racetrack while driving through it.

Try to drive through the straight part of the track with a high speed (point 1 on the map) during the second and third lap. In the game, there is the so-called rubberbanding, that is, other drivers may suddenly appear right behind you. If you don't make any mistakes in the final lap, they shouldn't pose any threat.

The entire race will take about five minutes. Winning it will allow you to advance to the final part of the fifth mission. Victory is also rewarded with a trophy / achievement.