On this page of the Mafia Definitive Edition guide, you can find a walkthrough of the 18th main mission  Just for Relaxation. You will learn, e.g. how to steal a truck, how to sneak into customs, where to find a shipment of cigars and how to escape in a truck with the cigars.

Get in the car 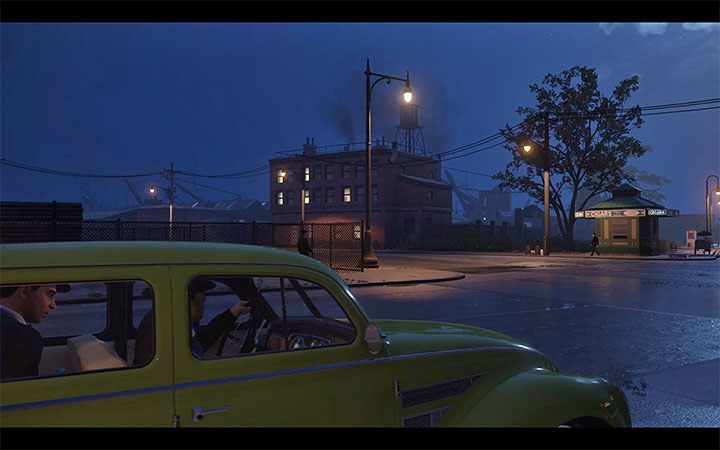 Before following the main objective, you can optionally visit Vincenzo and use the armory. Firearms will be useless in this mission, but you can take, for example, a baseball bat.

Get in your car and reach the harbour where you will receive further objectives.

Get a customs truck 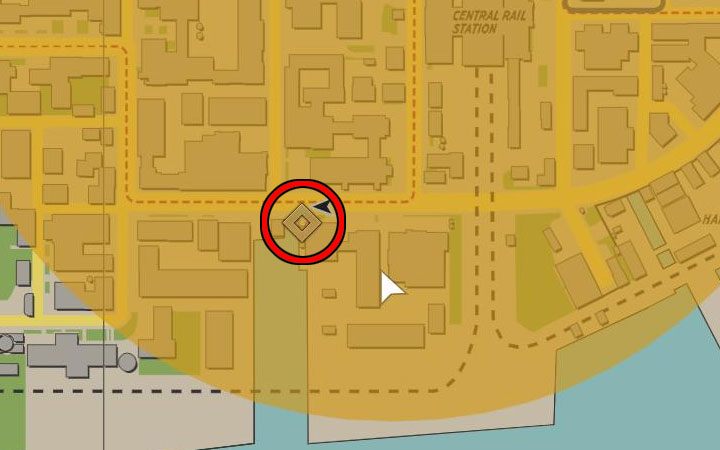 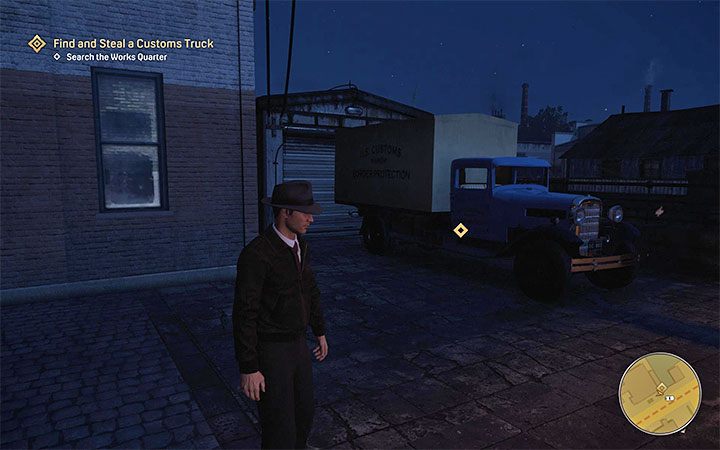 Your job is to steal a Customs Truck. Look for one of the trucks in the Works Quarter. An example of a place with a truck is shown in the images. Break into the vehicle (preferably using a lockpick to stay unnoticed).

Get the truck to Sam and Paulie 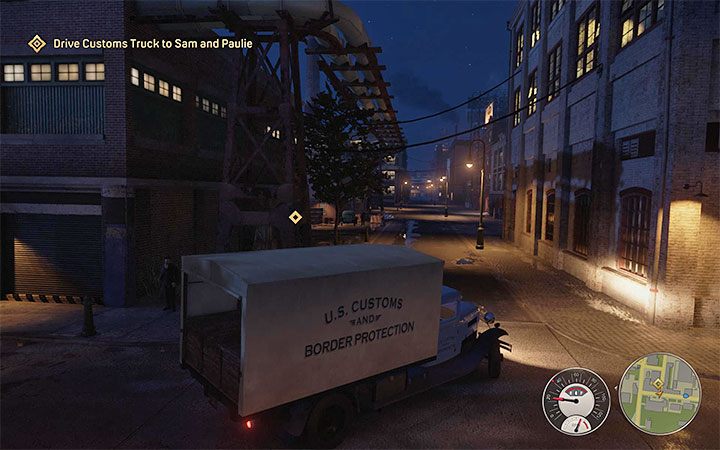 Sam and Paulie are in a side street adjacent to the Federal Customs Impound warehouse. Watch a cut-scene during which Tommy will hide in the truck. You have to wait for the heroes to drive the truck into a secure location and stop in one of the loading zones.

Find a way to get into customs warehouses 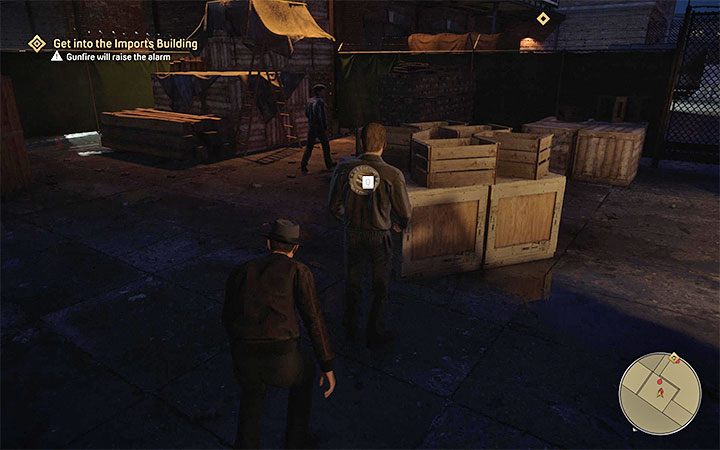 From that point on, you have to sneak  Tommy can't be detected and you can't trigger an alarm. Fortunately, nothing prevents you from quietly eliminating enemies. Try to keep the sneak mode on at all times.

Go straight, climb the wall, then onto the roof and turn left. There are two characters downstairs. Wait till they're gone. You can approach them from behind and eliminate with a melee attack. 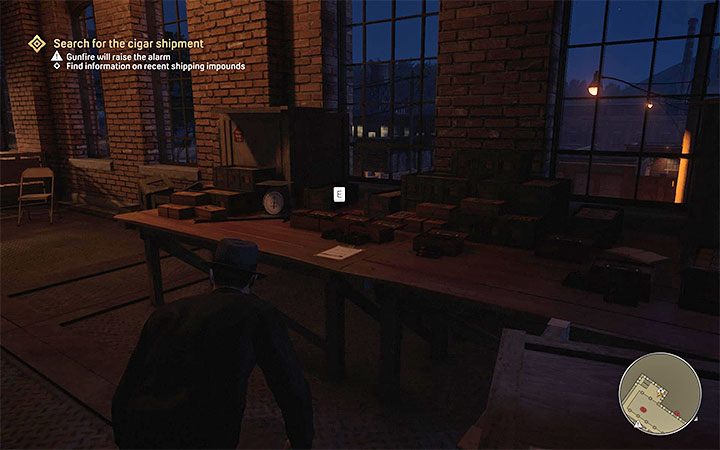 Climb up the crates to the lower part of the roof and head straight. Reach the large open shutter. After entering the new room, examine the document shown in the image. It has details about the cigars cargo. 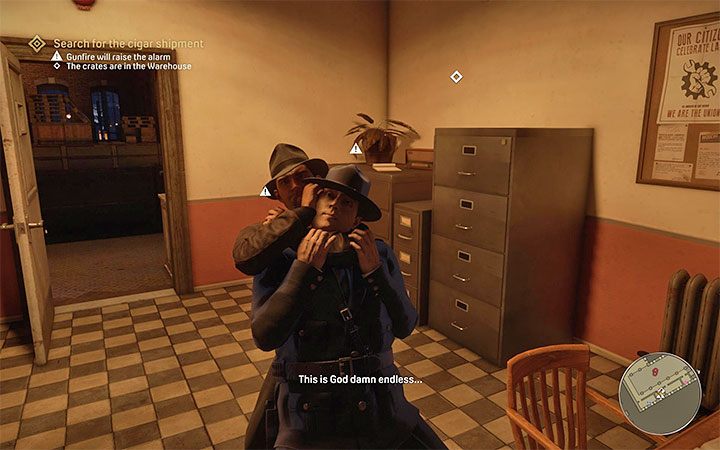 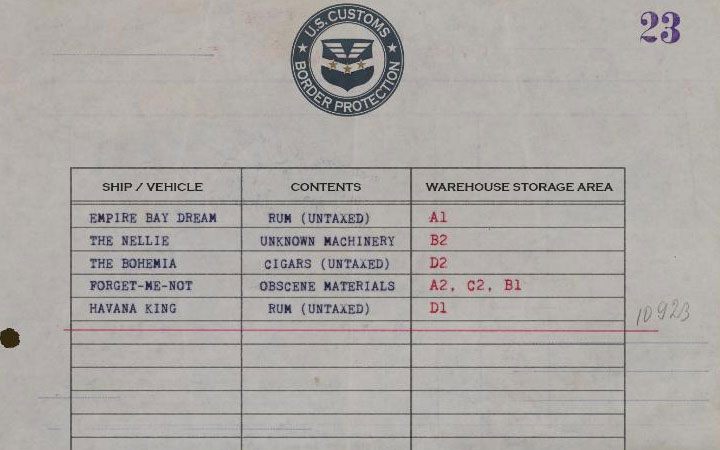 Stay on the upper level of the building and head towards the room into which every once in a while a single opponent enters. Eliminate that enemy with a stealth attack, then examine the file cabinet. You'll find that cigars are in the D2 storage area.

It is worth noting that it is not the only way to determine where cigars are stored. You can also find other notes in the warehouses. However, once you update the mission's objective, you won't have to look for more clues. 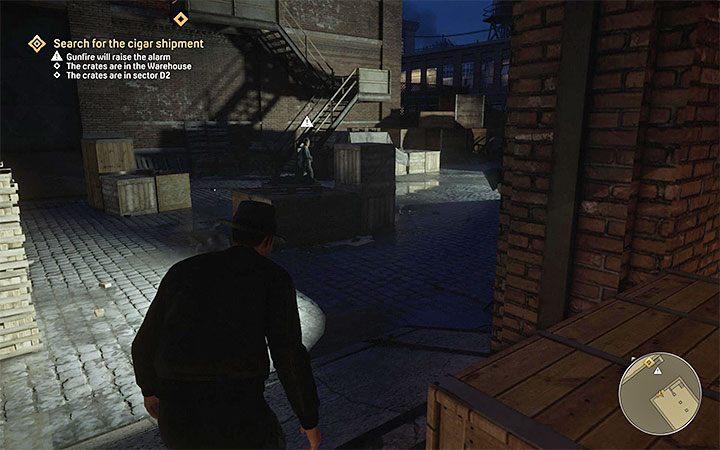 You need to get to the warehouse north of where you are. Get to the stairs, where you can wait for a single employee. After knocking him unconscious, go downstairs, and leave the building.

The area between the buildings is patrolled by a single guard. Perform a stealth takedown on him and use the stairs to reach the new building. 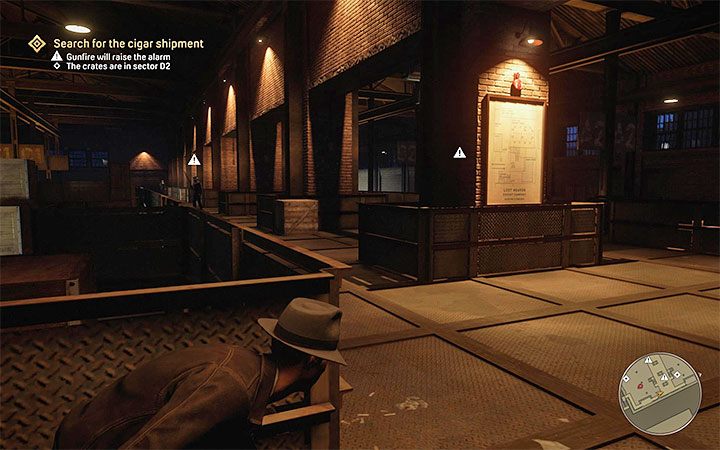 In the new warehouse, start by getting rid of 3 guards patrolling the upper balconies. You can wait for them to go in different directions  approach them from behind.

Alternatively, you can also leave them alone and sneak straight into the ground floor, though you would then have to be more careful about avoiding detection. 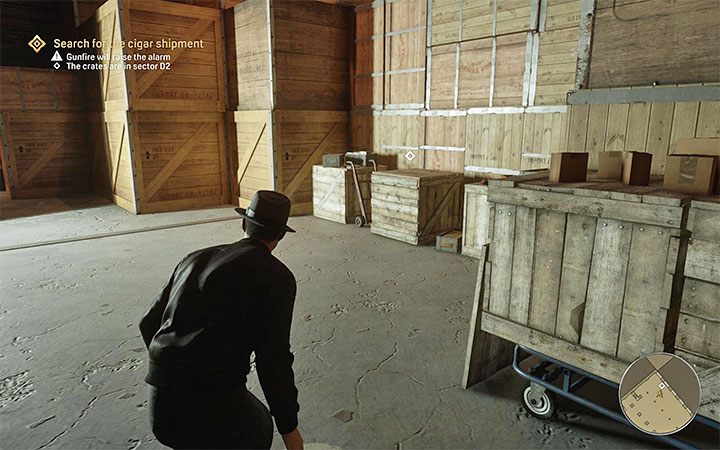 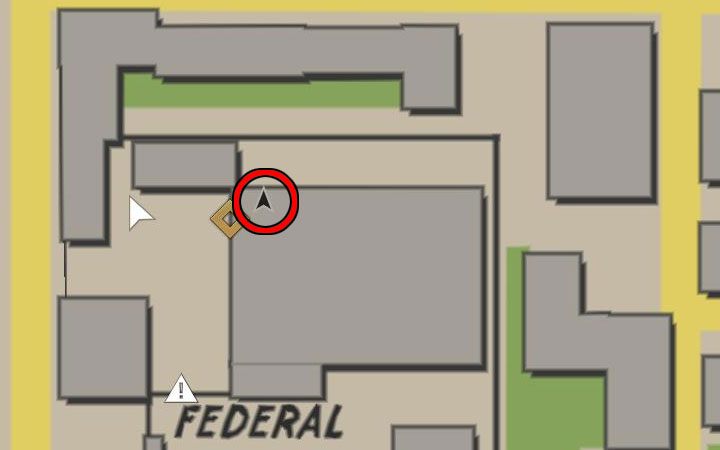 You have to examine a total of 8 crates on the lower level of the warehouse. Remember to perform stealth takedowns on all encountered enemies.

In our case, the cigars were stored in the last eight crates located at the opposite end of the warehouse. If you didn't find them there, just make sure you open all the interactive crates.

Return to Sam and Paulie 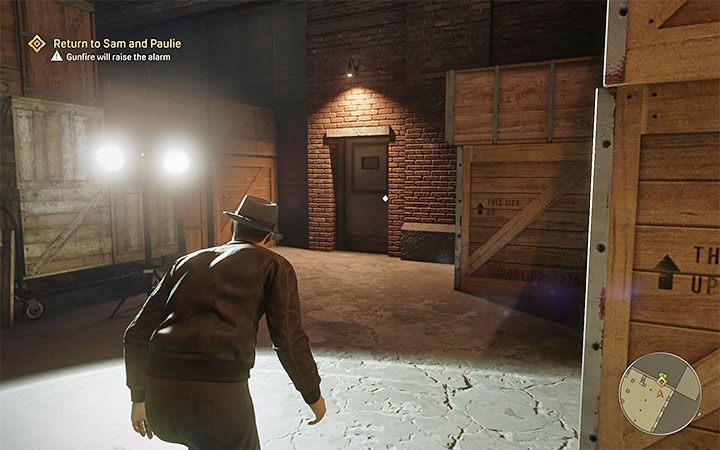 It's a very simple task. Open the warehouse door located at the end  they are show in the picture. Watch cut-scenes from loading cigars onto the truck. The heroes start to flee after the alarm was raised.

Escape from the Works Quarter 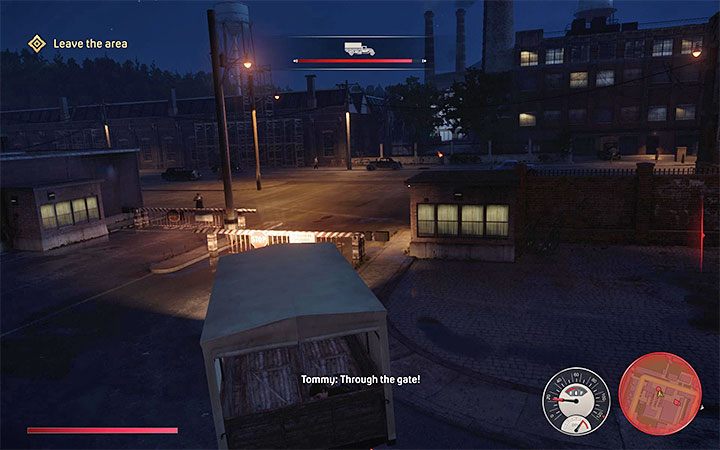 During the chase scene, Tommy will drive the truck. Start by leaving the restricted area as soon as possible to protect the truck from heavy damage  its energy bar is visible at the top of the screen. You can safely break through the barrier, but be careful not to hit any indestructible obstacle. 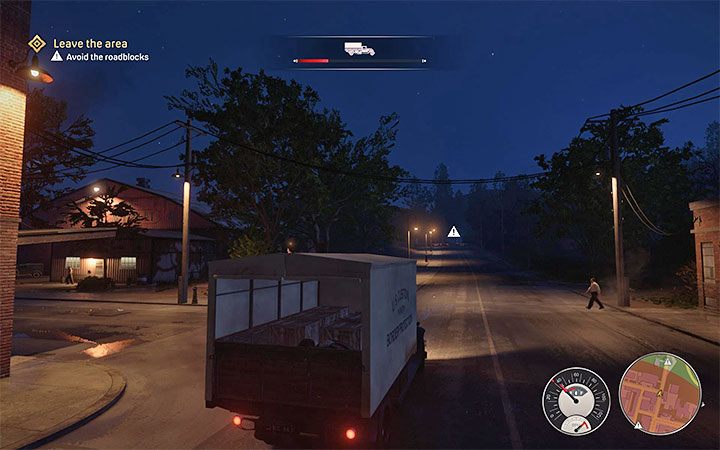 Escaping from the Works Quarter is unfortunately quite problematic. The first obstacle is the police roadblocks  they will appear on the map after you get close enough to them. Don't try to break through the roadblocks. Instead, after noticing one, turn around / turn into a different street. 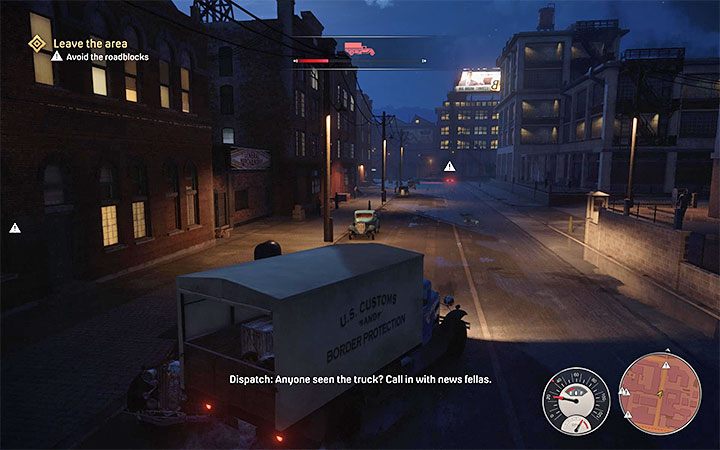 The second problem is police cars patrolling the Works Quarter. In this case, try to avoid detection. Police cars are fortunately moving quite slowly  you should have plenty of time to react. 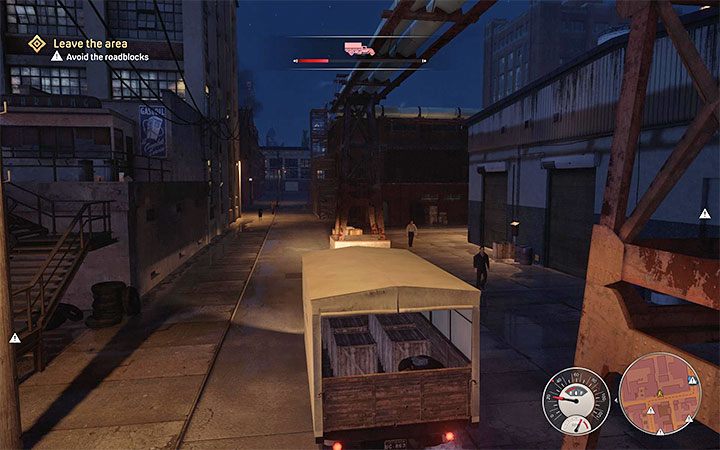 You can avoid police cars by driving between buildings and side streets that are closed to normal traffic. Try to react as quickly as possible to any new police car icon appearing on the map. You don't want to get in their sight. 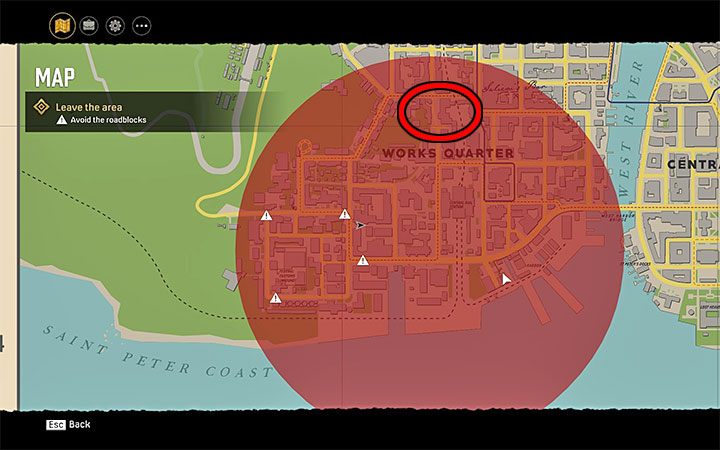 You have to try to find a way out of the Works Quarter. In our case, choosing the north street marked in the picture helped us leave the district. However, if you notice one of the police roadblocks there, just drive to some other place on the outskirts of the big red circle. 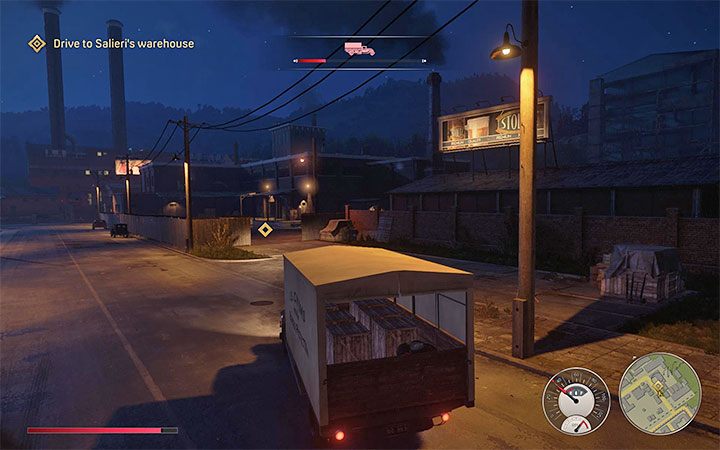 This part of the mission is simple. However, continue to avoid damaging the truck and breaking traffic rules. The cigar shipment must be delivered to Salieri's warehouse on the other side of town.

Go with Paulie to the train station 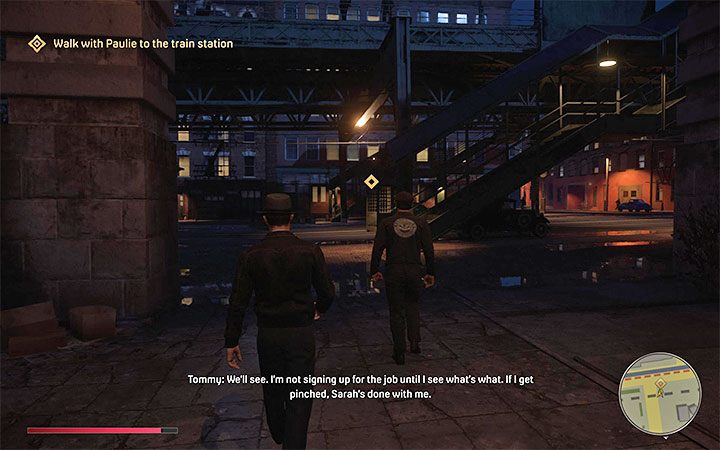 There are no action sequences in the final part of the mission. Head towards the station and listen to what Paulie has to say. Get inside the wagon to see the ending cut-scene.