On this page of the Mafia Definitive Edition guide, you can find a walkthrough of the 17th main mission  Election Campaign. You will learn, e.g. how to get into the old prison, how to get to a sniper position, how to correctly shoot a politician and how to escape from prison and evade law enforcement.

Talk to Vincenzo and get to prison 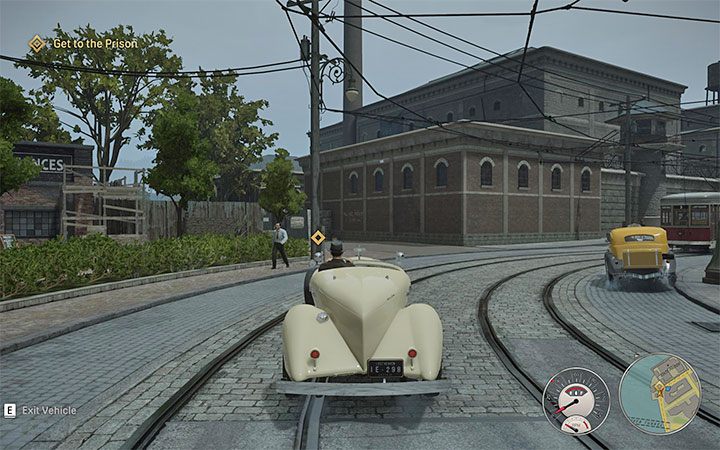 You learn that Turnbull is the target  the politician will have to be shot by a sniper at an election rally. Go to Vincenzo's workshop. He shows Tommy a sniper identical to the one waiting for the hero on the roof of the old prison. Vincenzo will also give you the key to unlock the entrance to the prison tower.

Use any vehicle and head towards the State Prison in the Central Island district. Park your car outside the prison, which is currently occupied by homeless people.

Find a way to get to prison 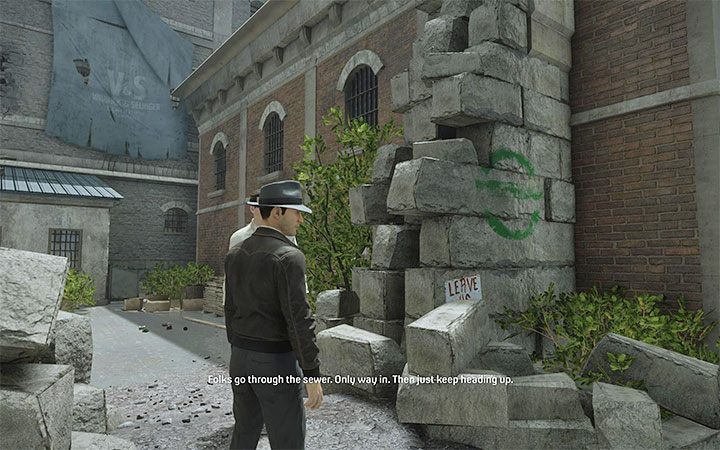 Climb onto the boards and then go over the fence. Talk to the man on the right. You learn from him that you have to follow green signs similar to the one in the image above. Fortunately, the route is fairly linear and you don't have to worry about getting lost. 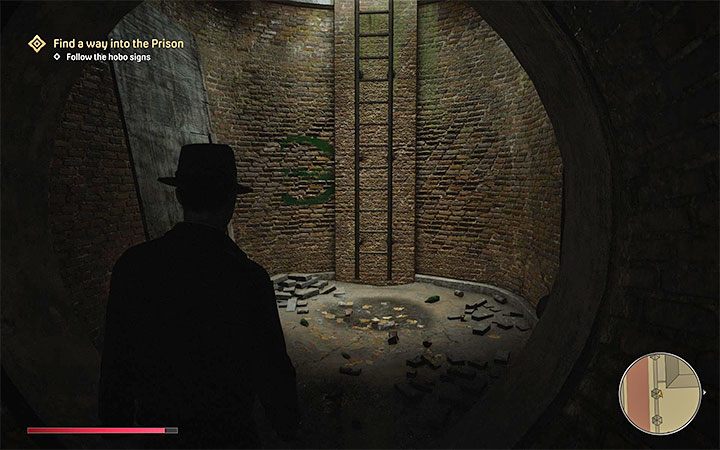 A descent into the sewers is behind the man you were just talking to. When you are in the sewers, expect to be attacked by one of the homeless. Defeat him in hand-to-hand combat  focus on dodging then counterattacking.

The image above shows the exit from the sewers. You shouldn't have trouble with finding it  even when you come across a fork, one of the two pats always ends quickly. 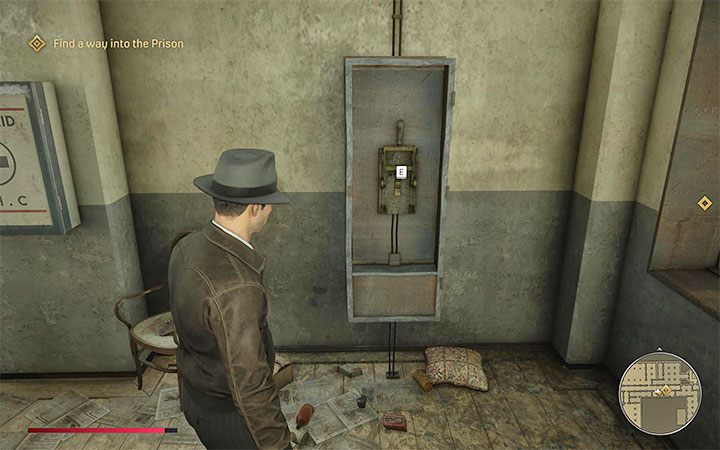 You'll find yourself in the abandoned yard of the prison. Head towards the entrance with a green sign on the wall. Get into the room with the first lever. You'll find more of them when you explore this location, and each lever opens up a passage or nearby prison cells. 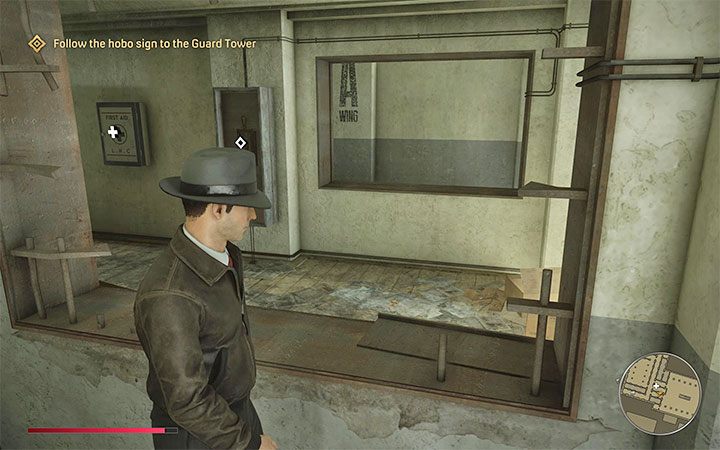 Enter the B Wing and moving through the prison. There is only one path to the destination, though you can peek into rooms or chat with homeless people along the way. Get to the new lever near the A Wing. Pull it.

Enter a multi-level location with prison cells. Tommy will again be attacked by one of the homeless. Defend yourself if necessary. 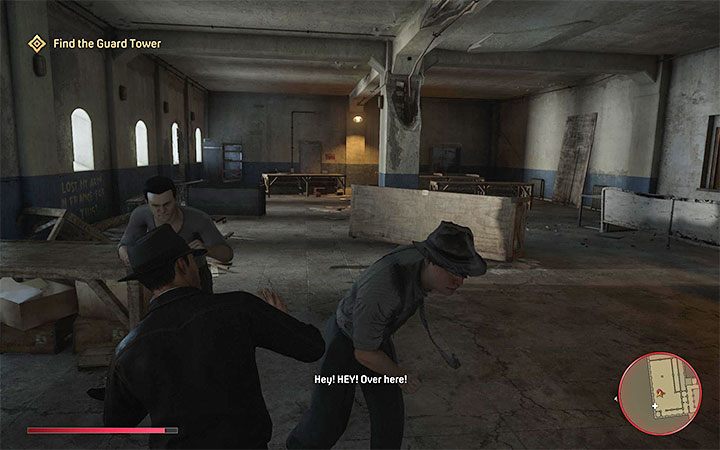 Go to the upper level and enter a small room with another lever that will unlock further passage. Walk up to the man in the booth and talk to him  you learn that you need to walk through the kitchen.

There, you will meet two hostile characters  attack opponents one at a time and don't forget to press the dodge button to avoid damage. 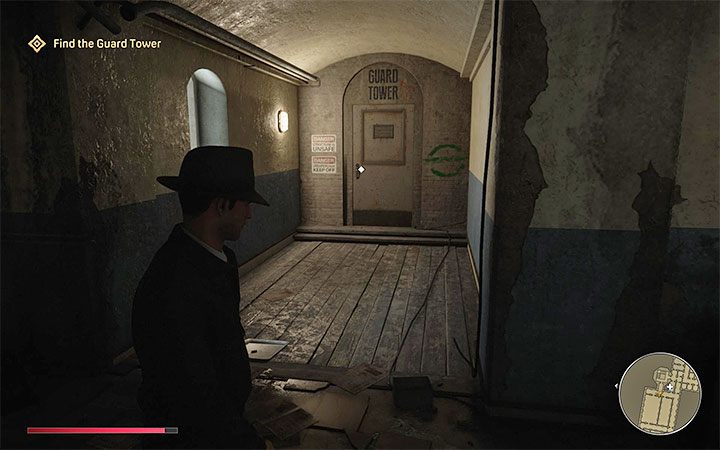 Get into the kitchen adjacent to the dining room and then climb to the next level (you'll find another green sign here). Follow the corridors until you reach the watchtower passage shown in the image.

After finding yourself in the stairwell, head upstairs. Reach the gate, which can be opened with the key received from Vincenzo at the very beginning of the mission. 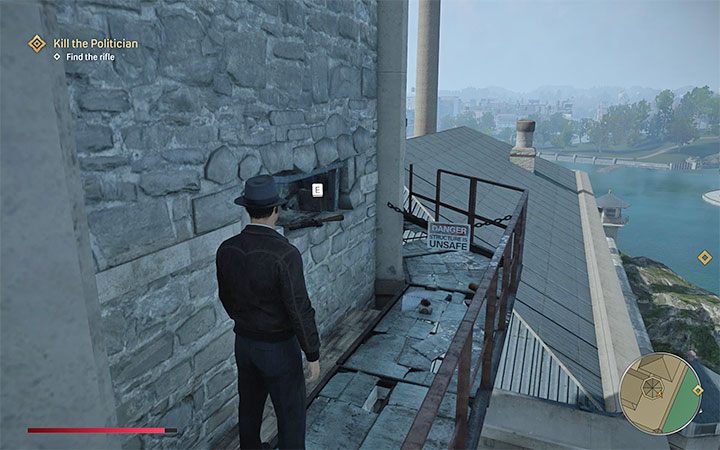 You will find yourself on the balconies of the watchtower. Follow them to the spot where Tommy finds a sniper rifle left for him. 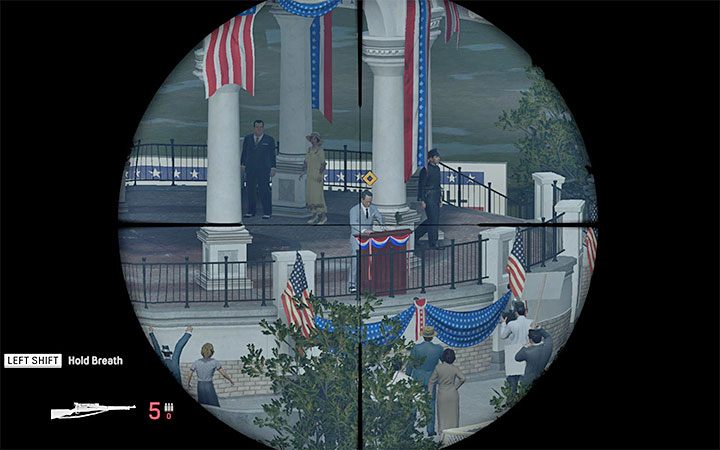 Turn to the island where the election rally is taking place. Use your telescope, aim at Turnbull (the politician) and hold your breath to make sure you hit him. You can't miss  you only have one chance. 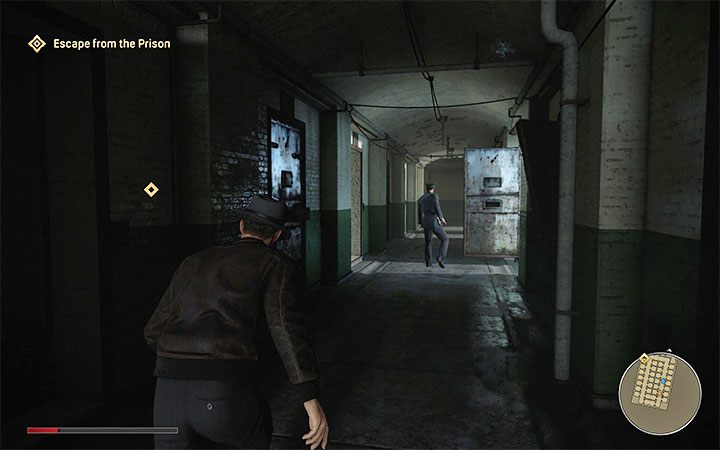 You have to go back. When attempting to leave the tower, part of it will collapse  this cannot be avoided. Tommy ends up on the lower floor of the prison with serious injuries and no weapons.

Break down the door and head to the place with a hole in the floor. Jump down to the lower level. Switch to stealth mode. Sneak at the first policeman and eliminate him with a takedown  you will get a revolver. 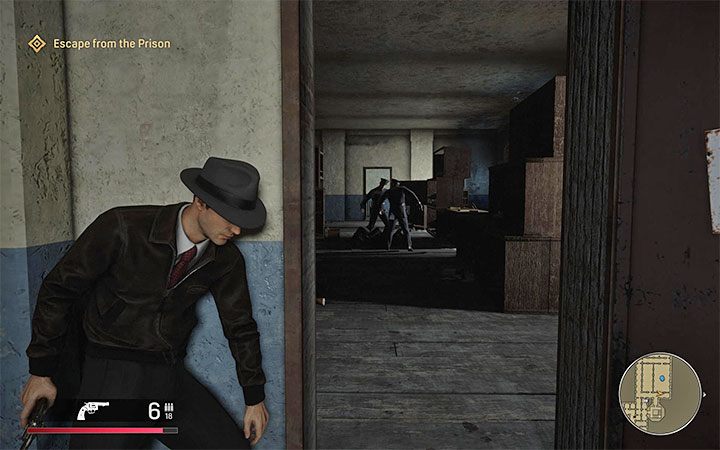 The nearby corridors should be patrolled by two more police officers  killing them (quietly or in regular fight) is optional.

Move on and look for a first aid point along the way. The path will lead you to the spot where 2 police officers are abusing a homeless man. You can shoot them or choose a corridor that runs along that room to get around them. 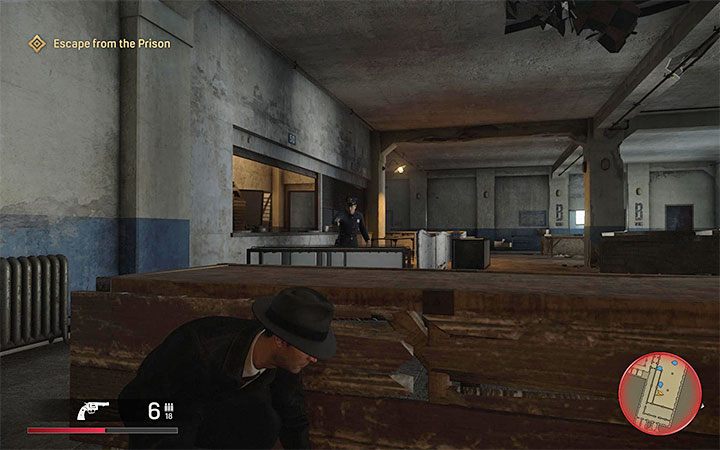 You will soon lose your footing again. However, you won't lose health or weapons this time.

Time for a bigger fight in the kitchen. You can hide behind a different cover to attack officers more effectively. You should also try to get a shotgun from one of them. There is a first aid point nearby  use it after winning the battle. 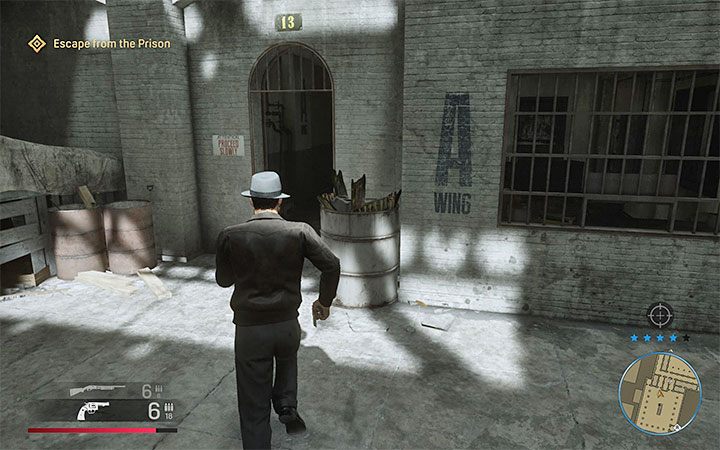 The next fight with law enforcement will take place in the previously visited multi-storey prison block with cells on the sides. You can open the cells by reaching the switches in the corners of that location. There's also a first aid station here.

Hide behind poles or enclosed guardrails and shoot the officers. You don't have to secure the entire prison block. In order to escape, you must descend to the lowest level and choose the passage to the A Wing  see the picture. 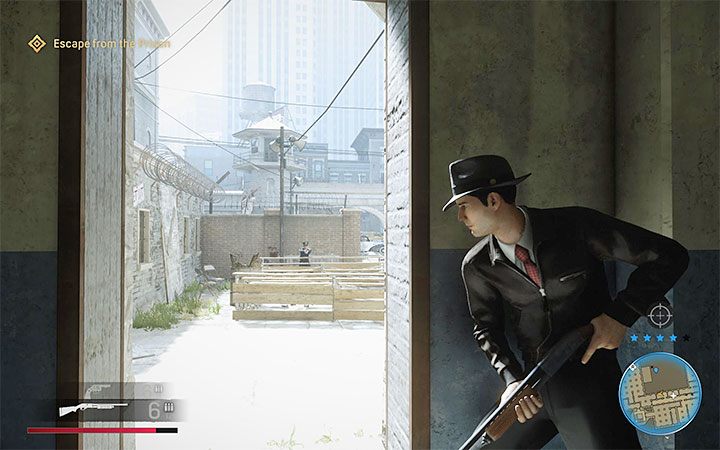 You will encounter more police officers in a dimly lit corridor. Hide behind covers and wait for them to get close enough to Tommy to attack them.

The corridor will lead you to the exit from the prison building shown in the picture. Don't rush to leave the building, shoot the officers standing outside first. 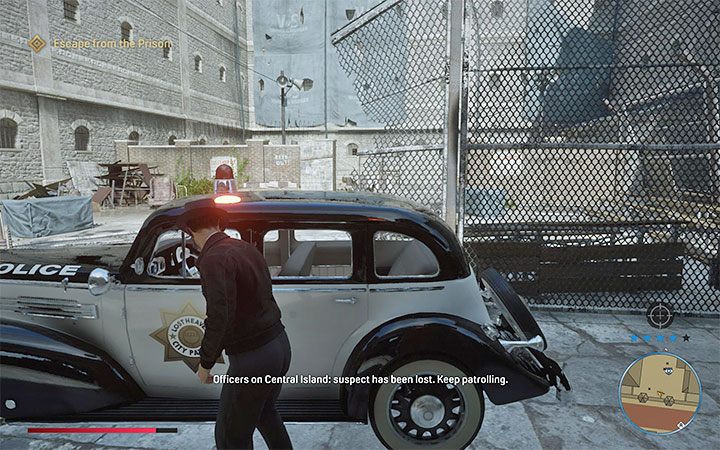 You now need to escape the police. You can do this in two ways.

The first option is more obvious  you need to lose a police pursuit. Break into one of the police cars parked at the main entrance to the prison. 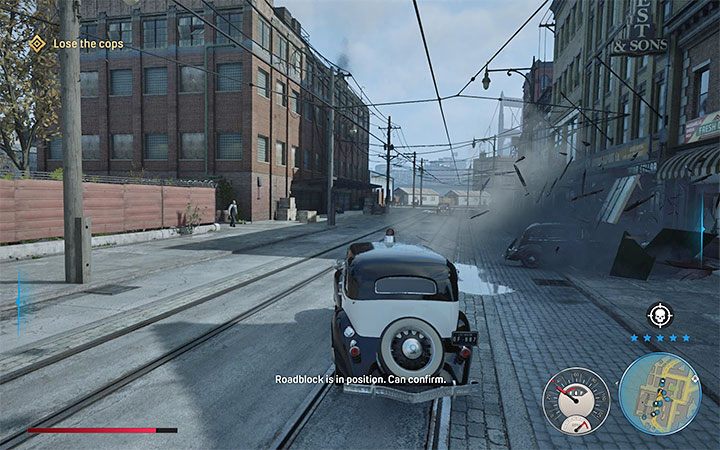 This 4-start chase is challenging. In addition to driving fast, you must avoid crashes with police cars, civilian cars, and surrounding elements, as well as react to police roadblocks (by turning onto another street or hitting police vehicles). Locations marked with arrows on the map can help you lose the chase faster. Driving through any of these places will stop at least 1 police car chasing Tommy.

Once you lose the police, you will have to avoid patrols for some time. Keep an eye on the mini-map and do not get close to police cars patrolling the area or individual police officers. 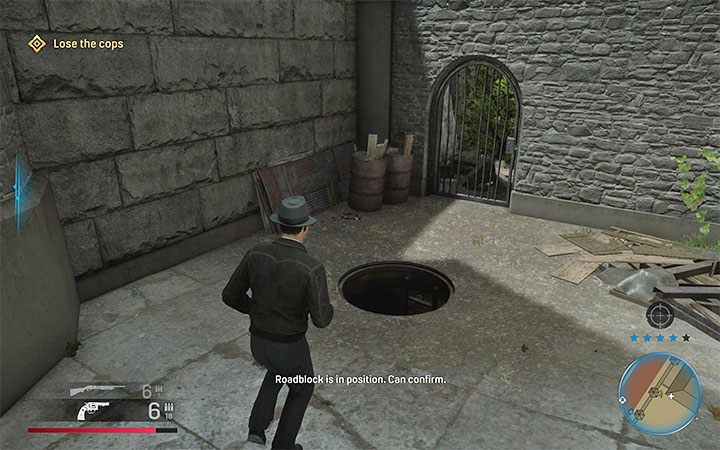 The second option will help you avoid a police chase. Go to the right of the prison's main exit and you will find the entrance to the sewers  see the picture. Make sure you use the ladder to avoid falling into the sewers and losing some health points. You have to go through the sewers in the opposite direction than you did at the start of the mission. 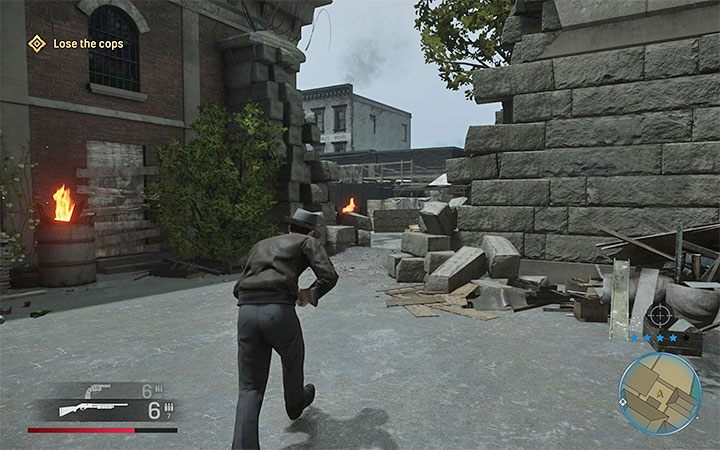 Once you get out of the sewers, don't rush to get out of the prison area  there may be some police officers in the area. Just stay here and wait until the police hunt is over. 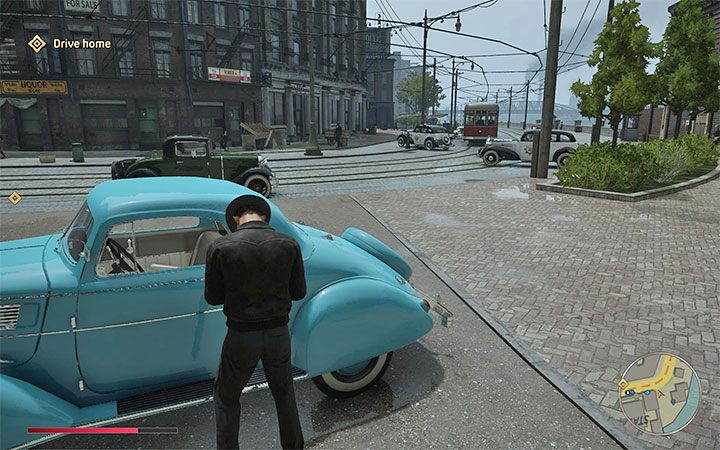 The final goal of the mission is the same for both variants of losing the police. If you have chosen the second option, you can jump over a wall and steal one of the civilian vehicles parked outside the prison.

Drive to Tommy's home in the Oakwood district. Enter the house through the front door to complete the mission.