On this page of our game guide to Mafia Definitive Edition, you can find a description of the 15th main story mission  You Lucky Bastard. With our walkthrough, you will learn, e.g. how to plant a bomb under Sergio's car, how to chase after Sergio, and how to hunt down and murder Sergio in the harbor.

Get to Sergio's house 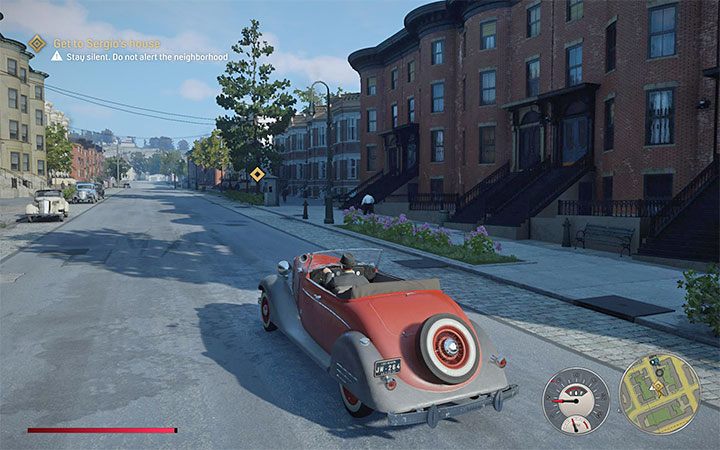 Tommy receives a bomb from Vincenzo. He has to plant it under the car of an enemy gangster. Leave the bar, choose any vehicle, and head towards Sergio's home in the Oakwood district. Tommy's gonna park his car on the other side of the road.

Plant a bomb under Sergio's car 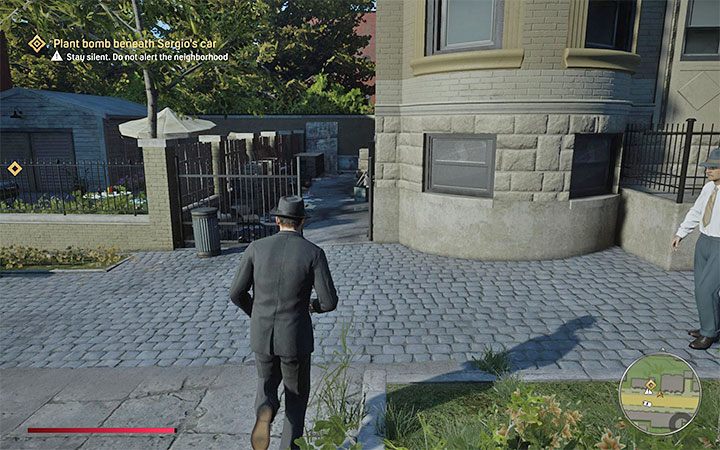 As you may have noticed, there's a single gangster hanging around the driveway of Sergio's house. You can't simply walk past him. Choose an alley to the right of your parked car  the accompanying image shows it. Activate the sneaking mode here. 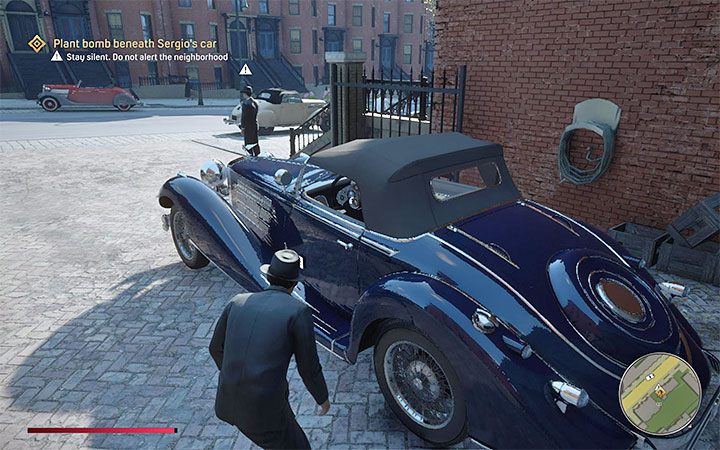 Climb onto the boards and then go over the fence. Sneak up to the door on the driver's side. After pressing the interaction key, Tommy places the explosive under the car. Leave the driveway in the same way  climb the fence again and avoid the single gangster.

Reach the phone booth on the opposite side of the road and watch the cut-scene. 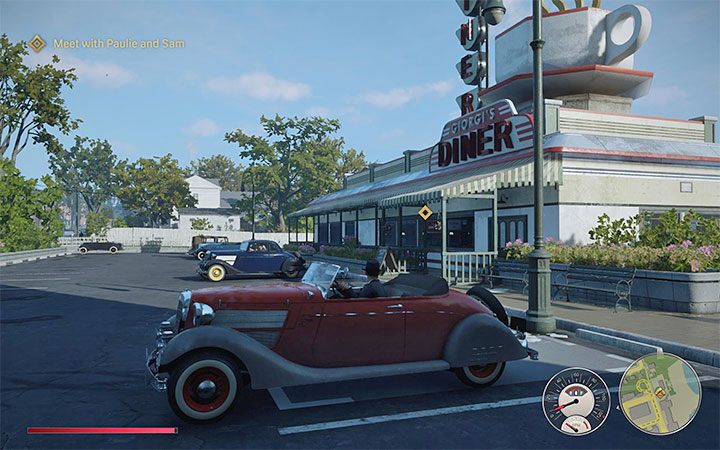 Get in any vehicle (it could be the same one you used to get to Sergio's house) and head to Giorgi's Diner located in the southeast corner of Oakwood. Sergio is supposed to be there  the next cut-scene will show the attack on the restaurant.

Don't let Sergio get away 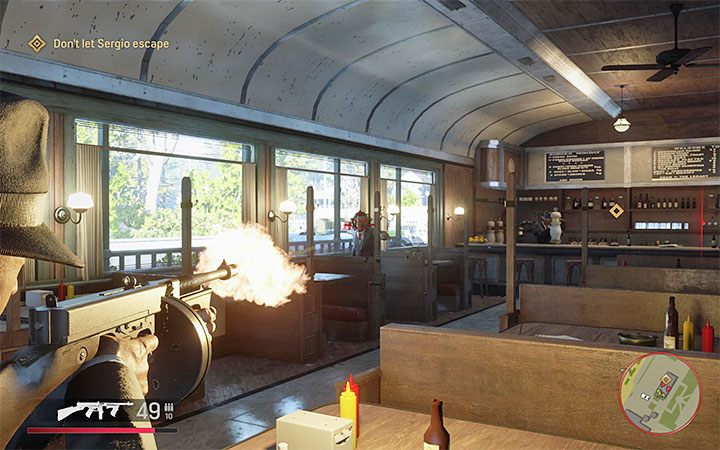 Contrary to what the title of the new mission might suggest, you don't have to rush to eliminate the hostile gangsters inside the dining room. Keep shooting at them from behind a cover. Don't risk going out into the open right away.

After killing the first few opponents, head for the passage leading to the kitchen. Be ready to kill another gangster. Your goal is to reach the back exit of the building. 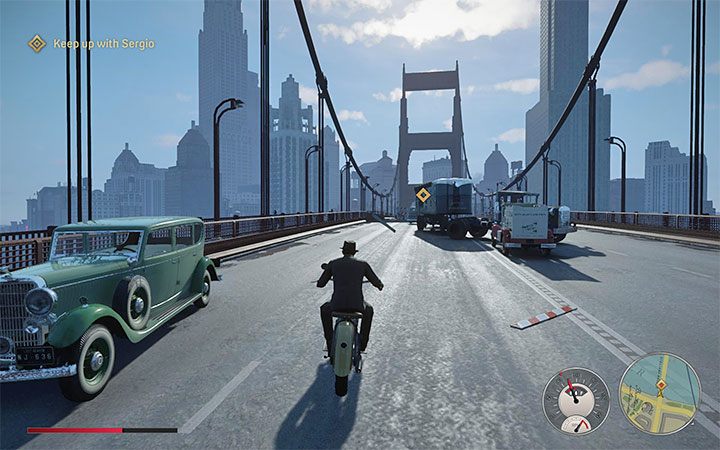 During the chase scene, Tommy will use a motorcycle. You don't have to attack Sergio's vehicle. Focus solely on driving, especially since every accident involves the risk of falling off the bike and failing the chase.

Along the way, you'll encounter some unique obstacles, e.g. a truck on the bridge, which you avoid by driving a slalom, or roadworks and a protest (drive between the people standing on the street). The chase ends in the harbor  watch a new cut-scene.

Get Sergio in the harbor 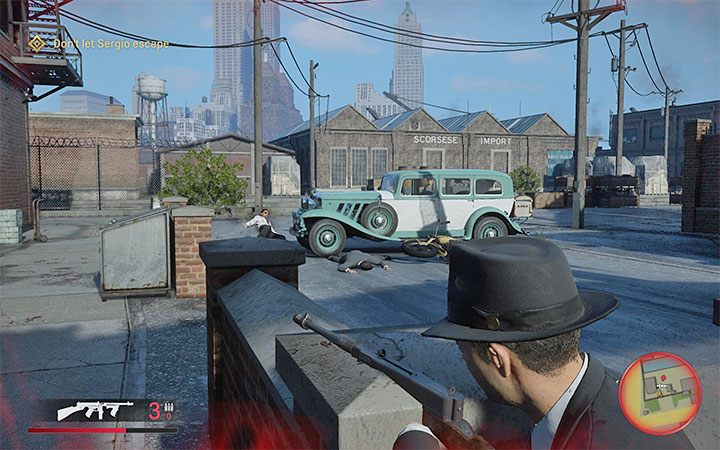 The path leading through the harbor is long but, as with the fights at the dining, you don't have to rush to catch Sergio. Focus on eliminating all the gangsters around you first.

Remember to hide behind various covers. Also, try to quickly get a better weapon from one of the killed gangsters. 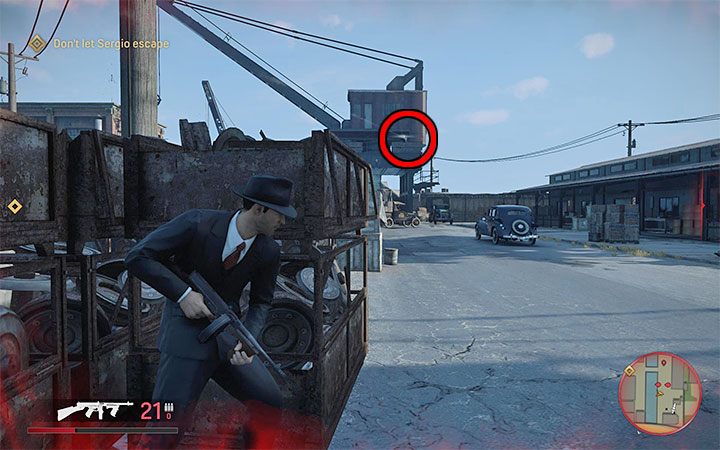 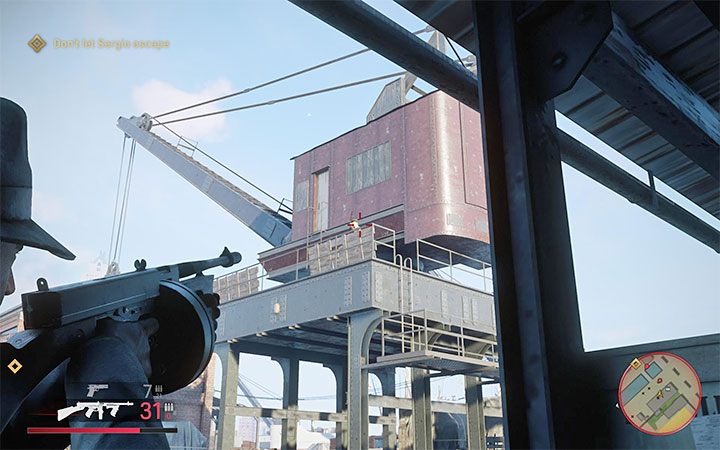 Watch out for snipers located in various parts of the port. They are staying on towers  the first out of the three snipers is shown in the above pictures. You can deal with them in two ways: 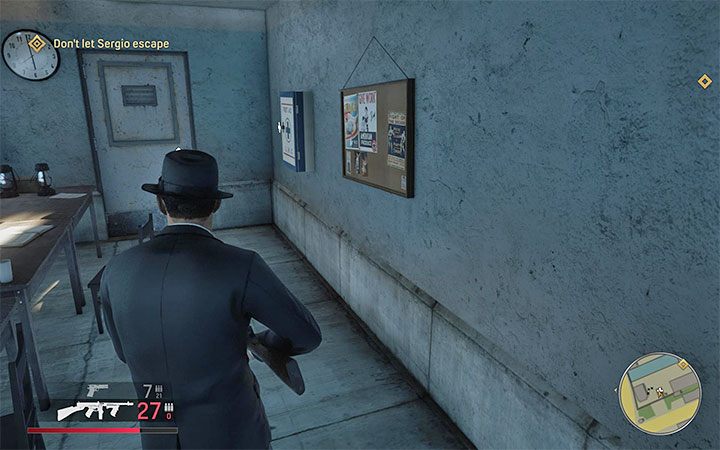 Don't ignore the buildings you pass along the way. Even if there are no opponents in them, it is still worth checking them out. You can find first aid points and crates with ammunition or throwing items.

Some battles also give you the option to attack enemies from the flank  watch their placement on the mini-map and look for covers that will help you approach opponents safely and attack them by surprise. 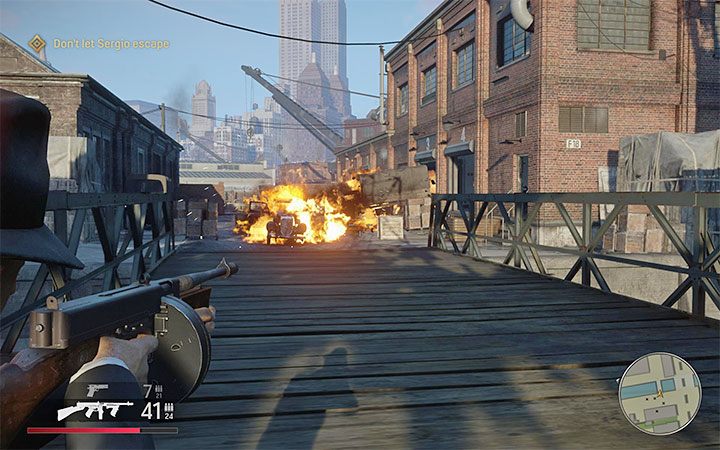 When you get closer to the bridge, you will have an excellent opportunity to hit barrels and blow up vehicles. The best moment to do this is after new enemies appear in the area.

A little further away, you'll notice new bandits coming in a truck. Try to shoot and kill them before they jump out of the cabin. 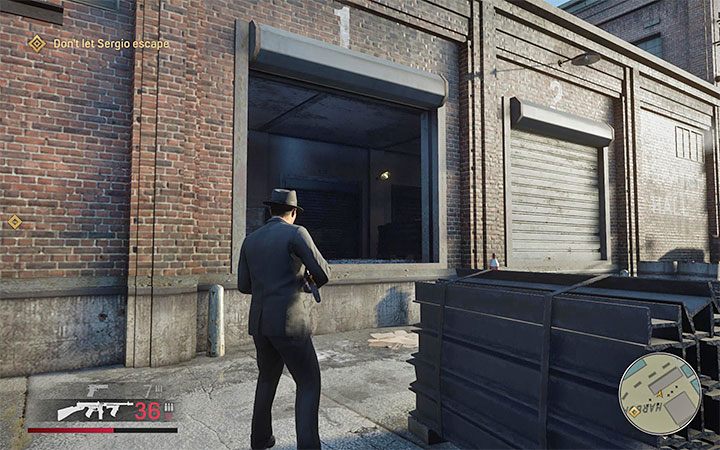 Watch out for new snipers and take the opportunity to explore the warehouse shown in the pictures. There is a lot of supplies here  a first aid point, first aid kit and Molotov cocktails.

Keep fighting. You can hit another red barrel. Don't forget to avoid another sniper and loot another optional building. 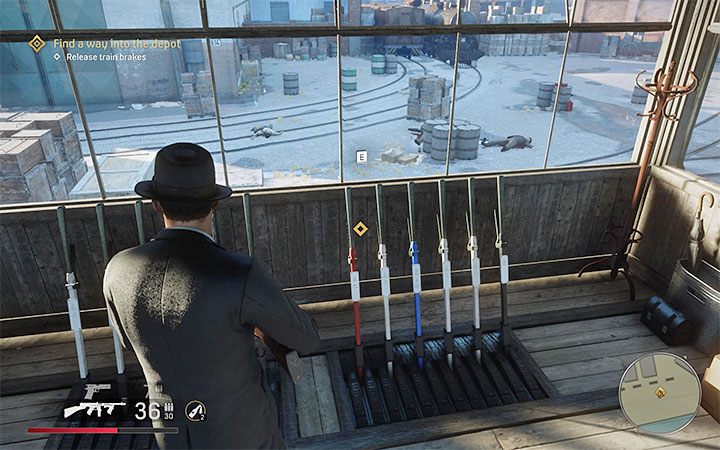 Eventually, you reach a larger courtyard. Your initial objective is to kill opponents. Take your time and attack them from behind good covers. Some gangsters may try to surprise Tommy with a flank attack  kill them before they manage to do that.

After clearing the area, head to the control tower. You'll find numerous switches, but you don't have to worry about solving any environmental puzzles. Just press the interaction key. You release the brakes and set off one of the wagons  it will crash into the harbor entrance. 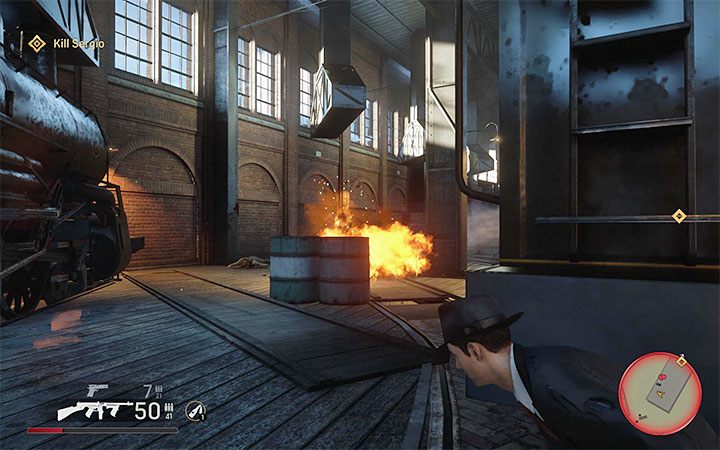 Head for the harbor entrance. Replenish your supplies and start attacking "regular" opponents. You can kill them with Molotov cocktails, but beware of grenades thrown at Tommy  quickly flee to another place. 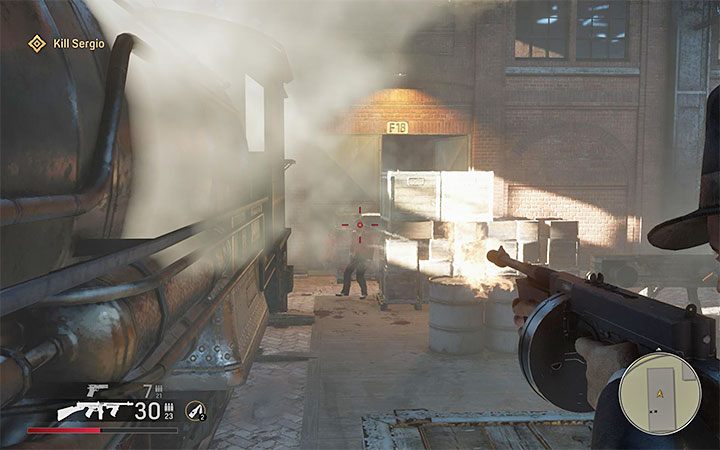 Sergio is hiding at the opposite end of the depot. When you get close to him, you can shoot the man when he leans out from behind a cover or you can throw a Molotov cocktail at him. The gangster retreats to a room with red barrels. You kill him during a cut-scene that ends the mission.