On this page of our game guide to Mafia Definitive Edition, you can find a detailed walkthrough of the 10th main mission  Omerta. Our walkthrough describes, among other things, where to find Frank's hideout, how to correctly track the FBI vehicle while remaining undetected, and how to get Frank after he reaches the Lost Heaven Airport.

Talk to Vincenzo and get to the fence 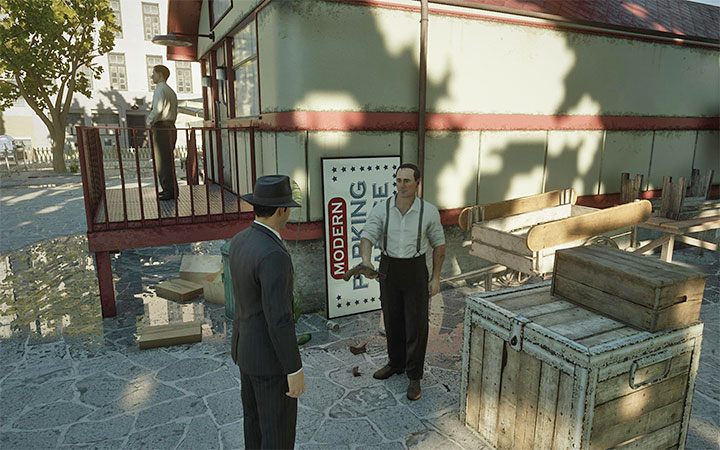 Vincenzo is standing near the spot where Tommy had a conversation with Salieri at the very beginning of the mission. Tommy will receive a sawed-off shotgun. After the conversation, get in the car.

Drive towards the previously visited Pawn Shop in Chinatown, that is, Biff's Pawn Shop. Get inside the building and talk to Biff. 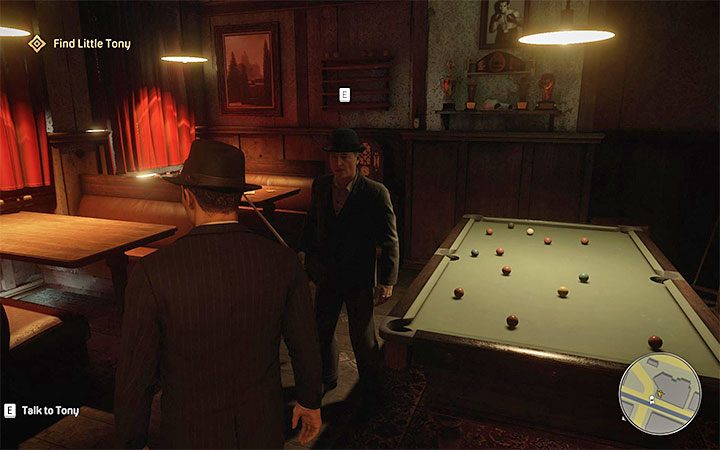 Little Tony resides in the Central Island district. Enter the place marked by the game. Little Tony will be standing at the pool table. He will give you information about the location of FBI's safe house where Frank is most probably being held and protected. 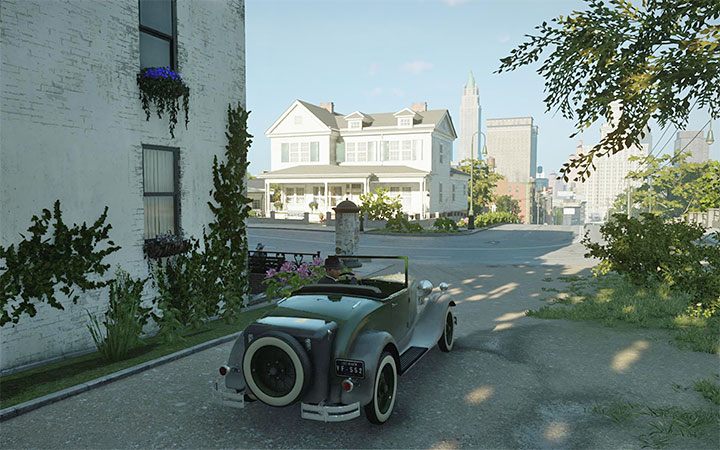 You have to drive to the Oakwood district. By the way, make sure you don't use a vehicle that has a rather poor performance, because it would make the next part of the mission very difficult. Park in the marked spot near the safe house. This will activate a new cutscene.

Tail Frank and his escort 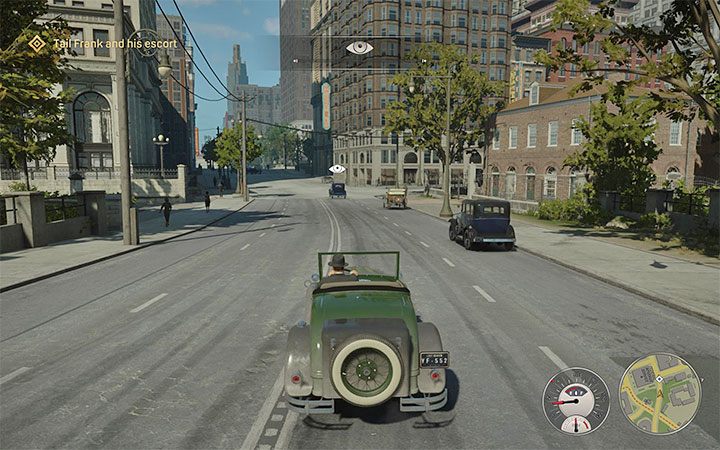 Follow the limo in which Frank is being transported. Here are some important information on how to successfully complete this part of the mission: 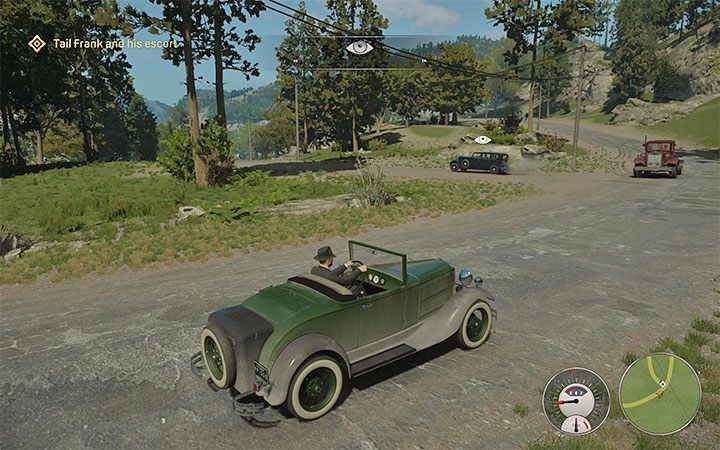 The tracked vehicle will clearly accelerate as you drive out of town. This will not cause any problems if you haven't chosen a very slow vehicle for this mission, as we have mentioned it before.

The FBI car will reach Lost Heaven Airport. Upon receiving the new mission objective, hide the car in the bushes on the left side of the main road that is leading to the airport grounds.

Find where Frank is being taken 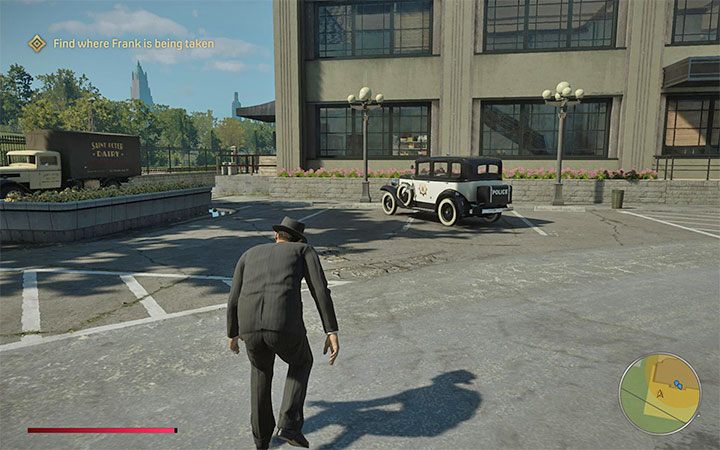 You can start sneaking. This is the recommended approach. However, you can start fighting at the airport  this won't fail the mission. The offensive approach simply forces you to get rid of additional enemies guarding the airport.

If you're planning on sneaking around, go through the bushes to sneak into the airport grounds. Head towards the airport's main building, which is marked by a yellow circle on the map. Ignore the guarded main entrance and turn left towards the side entrance to the building. 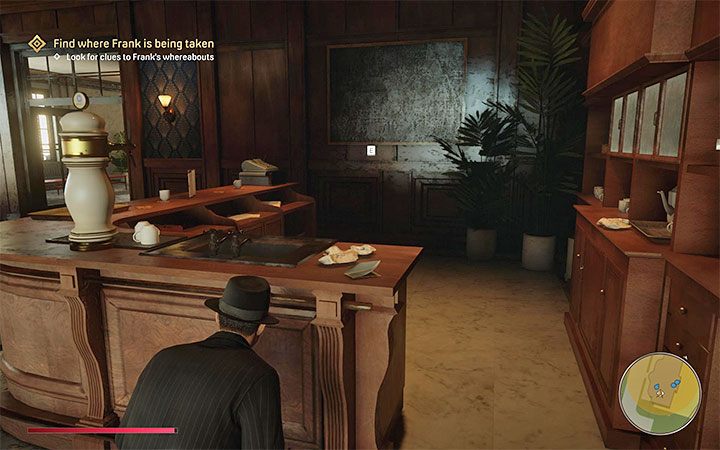 After being in the restaurant room, walk to the counter and examine the note shown in the picture. You'll find out that Frank is supposed to be flown out of Hangar 5.

Get Frank in Hangar 5 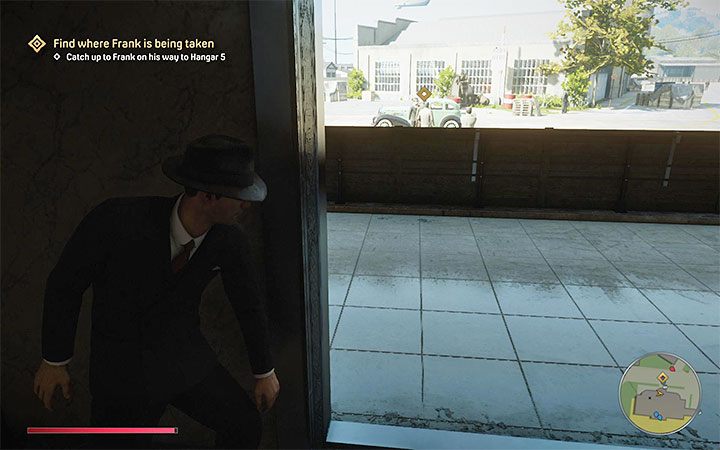 Sneak in from behind to your opponent guarding the restaurant entrance. Then head towards the back exit of the building. You can eavesdrop on conversations here, and you'll also find an ammo crate in the area. 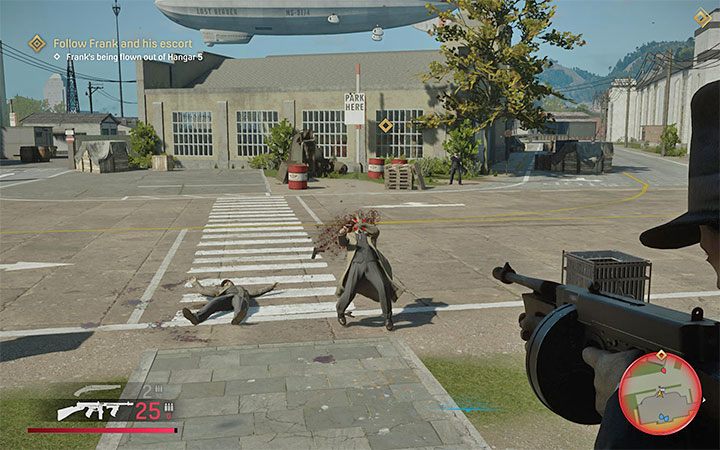 Hangar 5 can be reached in two main ways. The first option is a more force-related solution. You can start attacking bad guys in the airport right away. In this case, remember to take cover and shoot exploding red barrels. Also, don't forget about the two enemies that guard the entrance to the airport's first building. Don't let them attack Tommy from behind  you can attack them first or retreat to the restaurant room and wait for them to get closer. 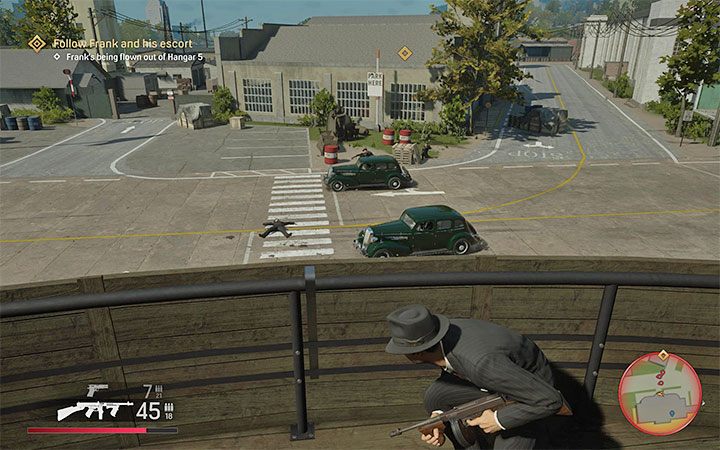 Another good idea for the aggressive variant is to reach the floor of the building where you found a note with information about Frank's whereabouts. Upstairs, you can find the large balcony shown in the picture, from which you can see the airport. You can shoot the opponents from here. Also, remember to destroy the barrels after the vehicles with the new gangsters arrive.

Some enemies will try to reach the floor. Don't be surprised by them  keep an eye on the mini-map. 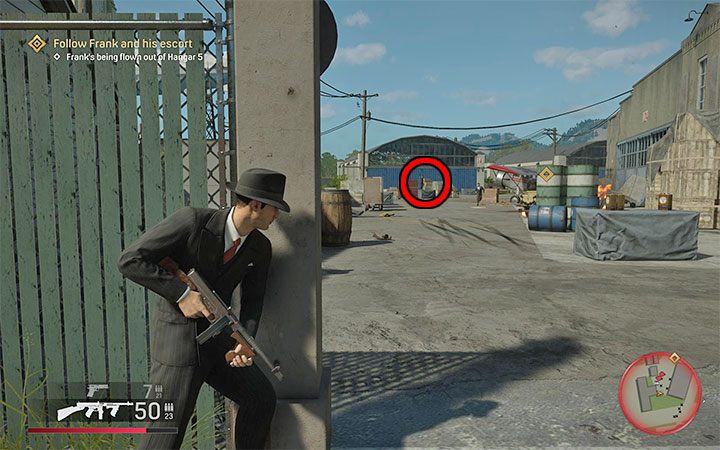 In the later phase of the battle, it is best to pass through the left building  you will find grenades and ammunition in front of it. The opponent with a rifle marked in the picture can cause you problems. If you've got a rifle yourself, shoot at him from a greater distance. If not, approach him by hiding behind building walls and other large covers. You can throw grenades or Molotov cocktails at your enemies. 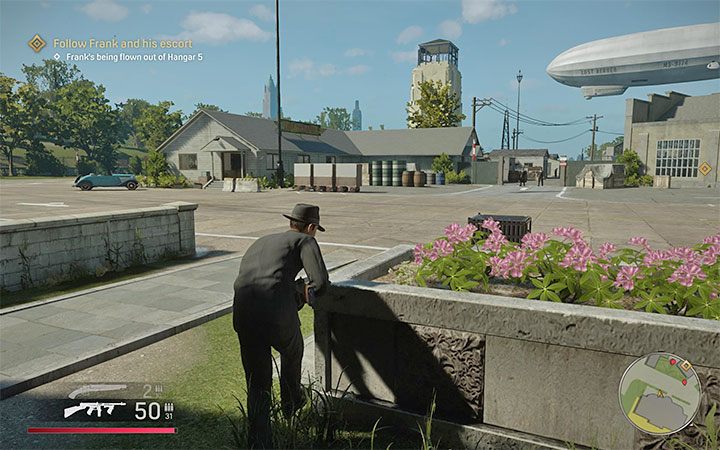 The second option is to sneak into Hangar 5 - it is a better idea in our opinion. This way you can get Frank without taking part in any battles with enemies. In this case, start by sneaking into the airport building shown in the left picture.

There are grenades and ammunition at the entrance to this building  you may need them if you fail some part of this mission and get noticed. 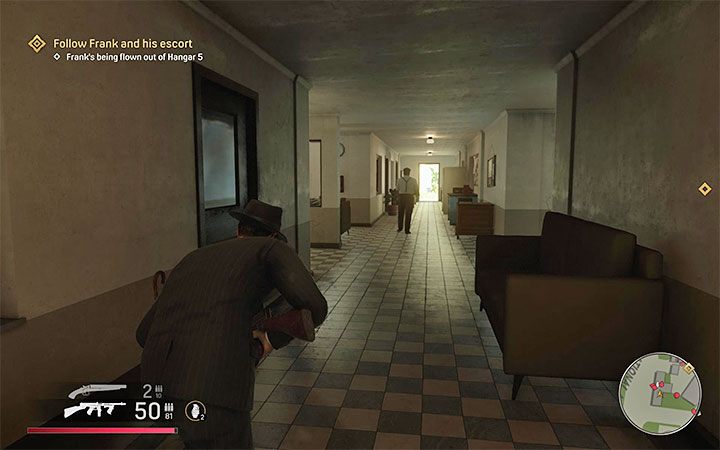 After entering the building, wait until the opponents have finished their conversation and surprise the single opponent from behind that will walk away from the rest of the group. 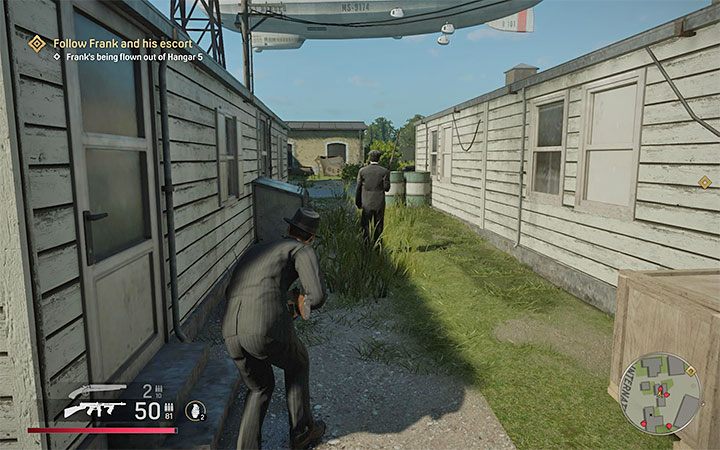 In the same way, you can get rid of 2 opponents standing between small buildings  take them from behind and quietly eliminate them by using melee combat. 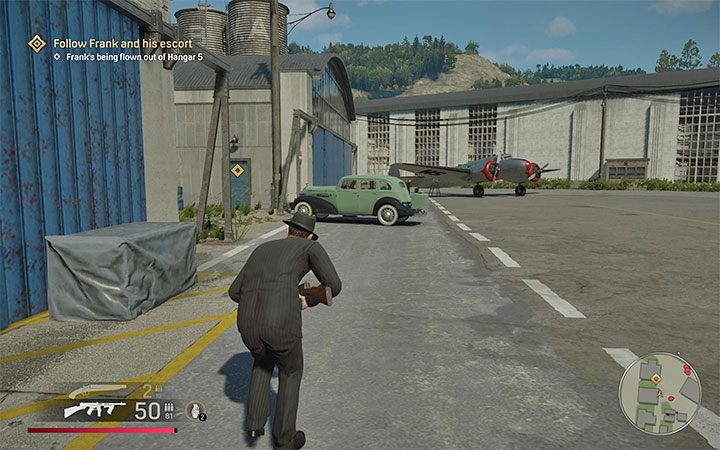 Whatever option you choose, you need to reach the entrance to Hangar 5 shown in the screenshot. You will recognize it by the vehicle parked next to it. After entering the hangar, a cutscene will be displayed. 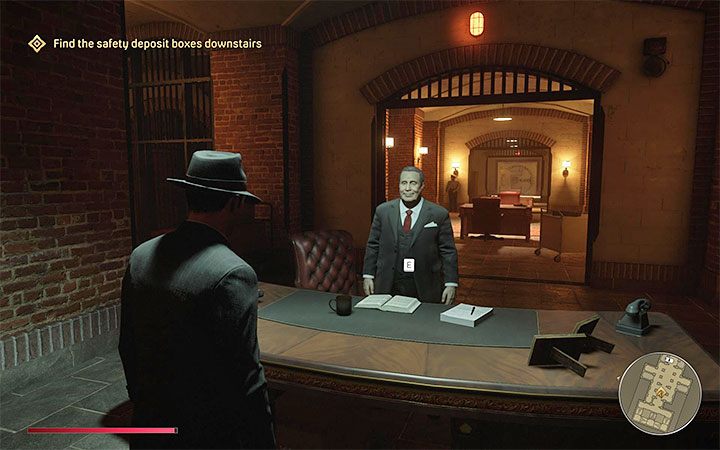 After regaining control of Tommy, he will be standing at the entrance of the Grand Imperial Bank. Go inside and talk to a woman who will direct you to the lower floor.

Descend the stairs and talk to another bank employee. The employee will lead Tommy to the safety deposit boxes. There are only a few cut scenes left to watch.