On this page of our game guide to Mafia Definitive Edition you can find a description of main mission no. 8  The Saint and the Sinner. It's an extremely long level. Our walkthrough suggests, among other things, where to find Michelle at the Corleone Hotel, how to plant a bomb, how to win the battle in the church, and how to escape the police forces by driving a hearse.

Additional note: This mission is a combination of two tasks known from the original game (Mafia The City of Lost Heaven)  namely, the missions called The Whore and The Priest. In the remake, the activities in the Corleone Hotel and in the church are performed as part of a single mission.

Collect the bomb from Vincenzo 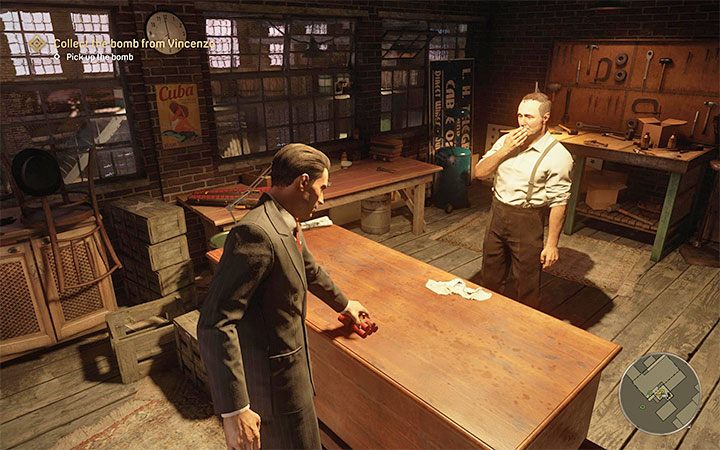 Go to Vincenzo's workshop and talk to him to get a bomb that you can use to blow up the brothel. 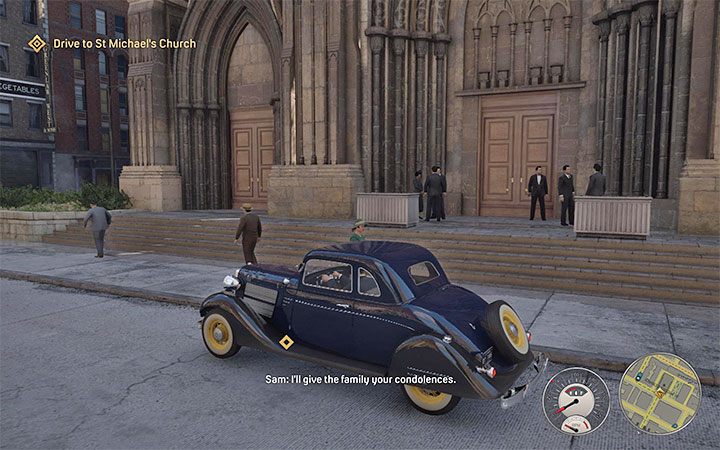 Go back to the yard and meet Sam at the car. After getting in the car, you have to listen to a conversation in which Sam asks Tommy to keep Michelle alive.

Drive to the St. Michael's Church located in the Downtown district. You have to drop Sam there. 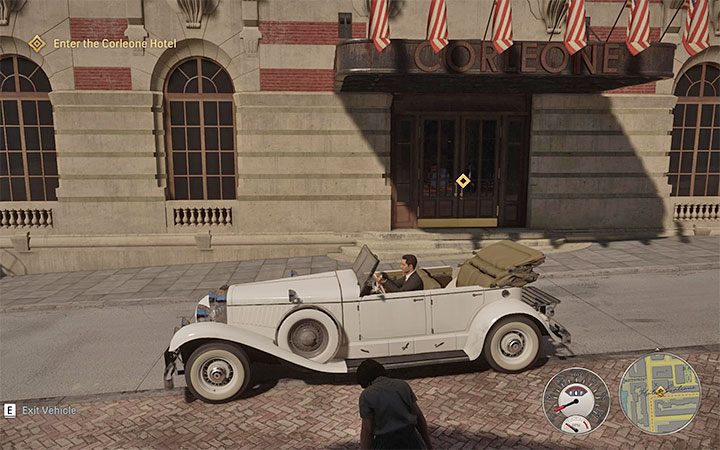 The Corleone Hotel is a short distance from St. Michael's church. You can get there by any vehicle or, as a last resort, even on foot. Use the main entrance of the building. 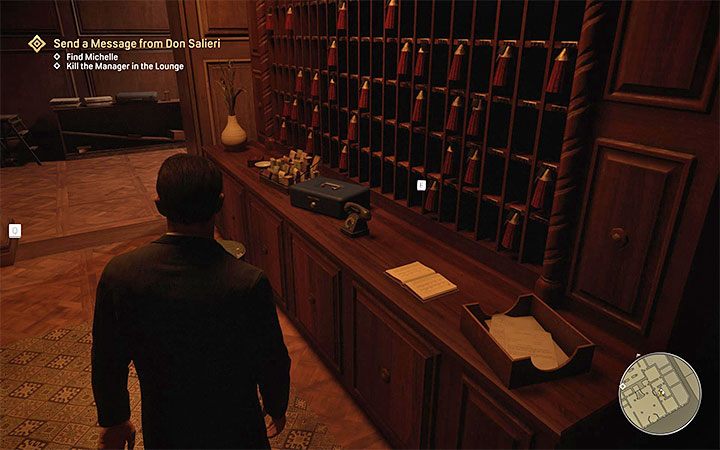 After you enter the hotel, you will receive two mission objectives. However, it's worth finding Michelle first before any major fighting.

Try to get optional information about Michelle's whereabouts. Sneak into the back of the concierge room on the right side of the hotel to get more info. Find the book shown in the screenshot and you will be able to determine the woman's whereabouts. Alternatively, you can also find business cards with similar information on the upper floors. 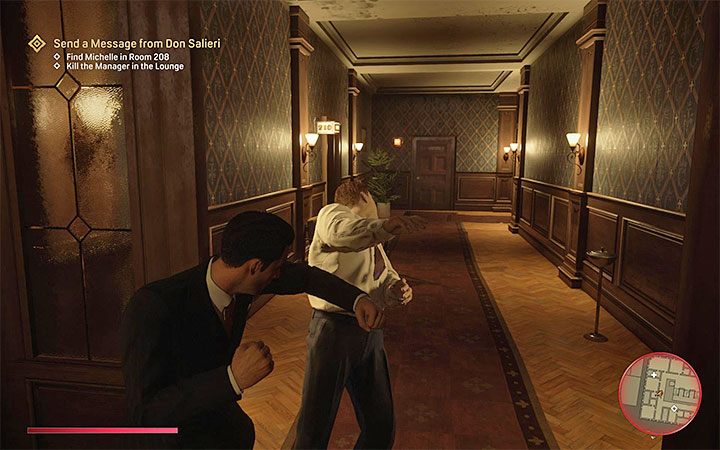 Michelle resides in room 208, which means you need to take the main staircase to get to the second floor of the building. Near the entrance to room 208, you will encounter a single thug  defeat him in melee combat. 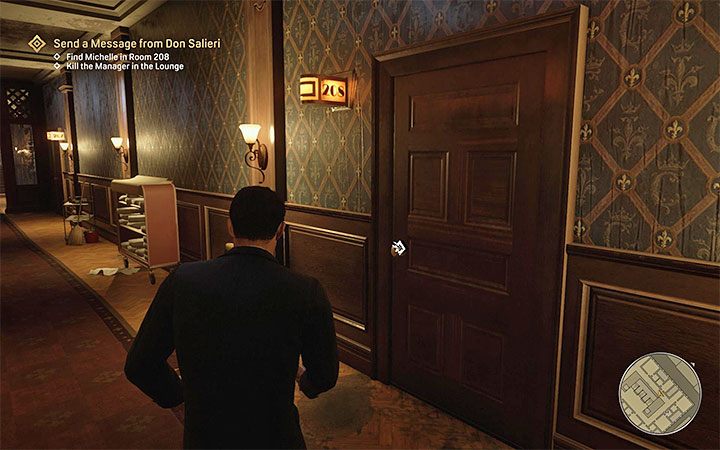 Enter room 208 and watch the cutscene which depicts the meeting with Michelle. 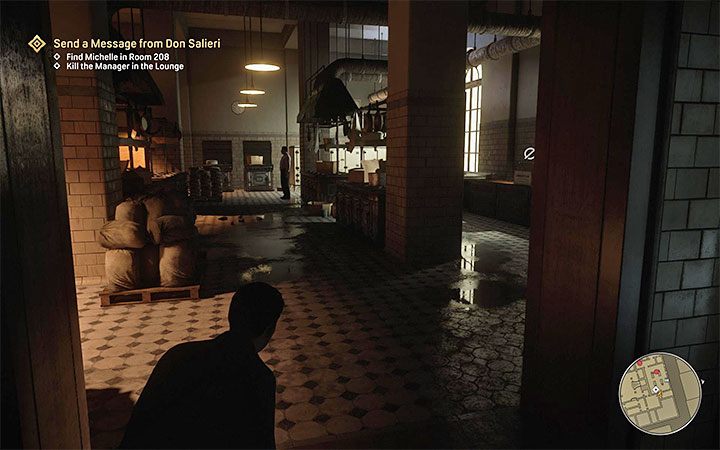 The hotel manager resides in the Lounge on the ground floor of the building  this is one of the rooms on the left part of the hotel. Before you try to murder him, it's worth sneaking through the back rooms on the ground floor. You can quietly get rid of a few bandits along the way so that once you start fighting, Tommy will have fewer people to shoot. One of the enemies will also drop a shotgun and you should pick it up (of course, in the later part of the mission you can switch it for another major weapon). 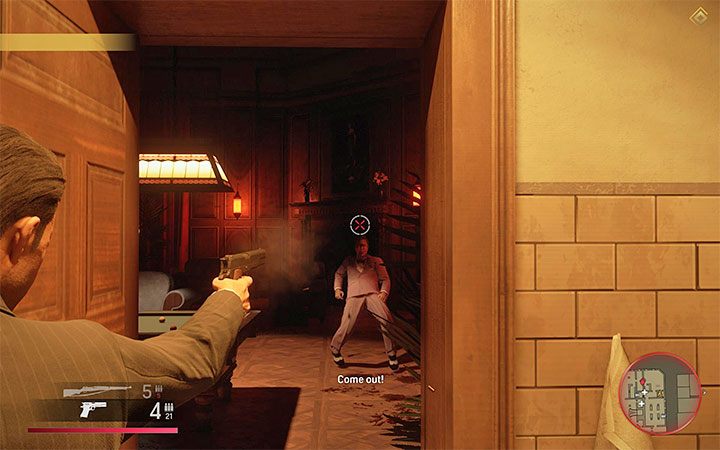 It's best to shot the manager and kill him right away. Then start to observe the minimap indications and wipe out all incoming enemies. Also, you can escape through the back rooms that you have cleared out earlier. Along the way, you'll find an ammunition crate and a first aid station. 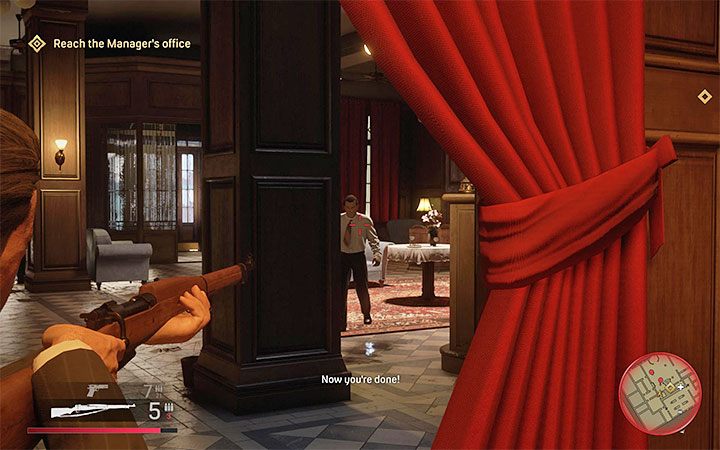 Now you have to make your way through the third floor of the building. Along the way expect to come across many gangsters. Often check your minimap in order not to get caught off guard.

Initially, head towards the lobby. Get rid of the enemies from this area and take the stairs leading to the first floor. 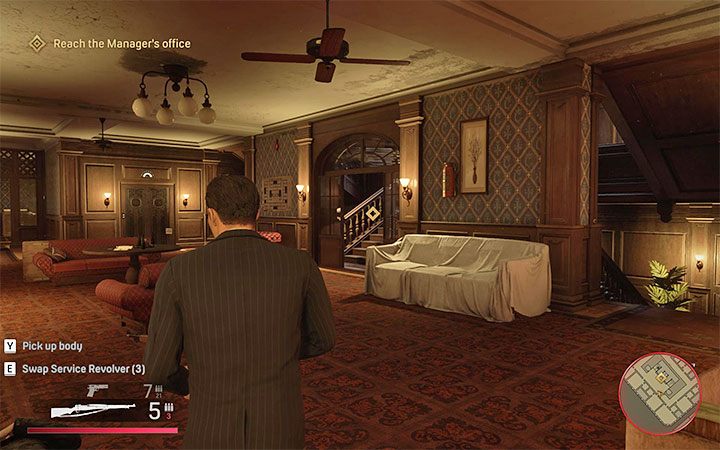 Climb the stairs to get to the next floors. However, take your time to wipe out all incoming enemies. Once you're back on the 2nd floor it's worth checking the room 204, in which you can find a rifle and an ammo crate. Also, search for information about the location of First Aid points by checking your mini-map.

A new passageway has been unlocked on the third floor of the hotel (as shown in the screenshot). Once again, look for opportunities to take position behind any sort of cover and attack your opponents. 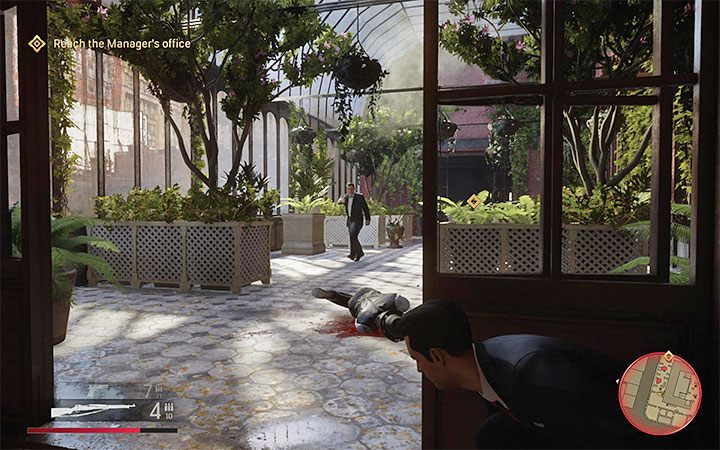 Follow the main corridor, but don't ignore the opportunity to visit the hotel rooms, which may contain First Aid points or ammunition crates. Be careful as you get through the small garden  it can be a bit more problematic to spot opponents in this area who are hiding behind bushes or awaiting you in the next corridor.

You will finally reach the manager's office which is located at the end of the corridor.

Collect the cash and documents and plant the bomb 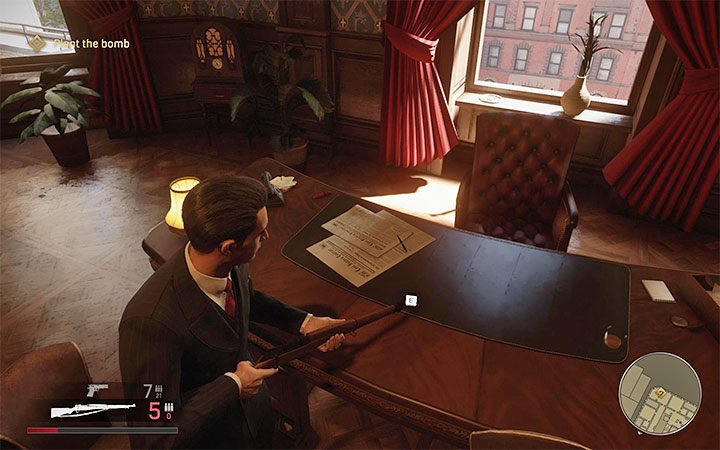 Start by exploring interactive areas marked on the mini-map  Tommy has to pick up some cash and look at two documents.

Go to the main desk to plant a bomb. A cutscene will be activated. Police forces will arrive to the hotel. Also, the bomb will explode.

Escape over the rooftops 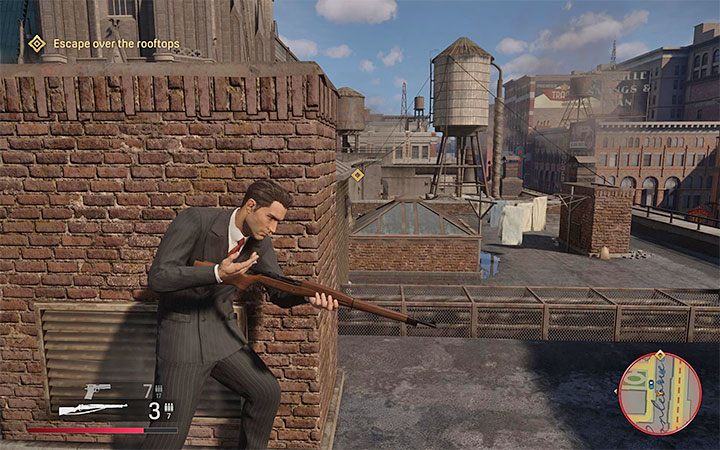 Start your journey on the rooftops. Initially, Tommy has to run away from the police, so do not stop and quickly climb onto objects, stairs or ladders. Luckily, you will pass the first aid station on your way.

Confrontations with deputies and law enforcement officers will start pretty soon. Whenever possible, take cover behind any sort of obstacle and fire at your enemies. Don't stand in the open space or you may become an easy target. 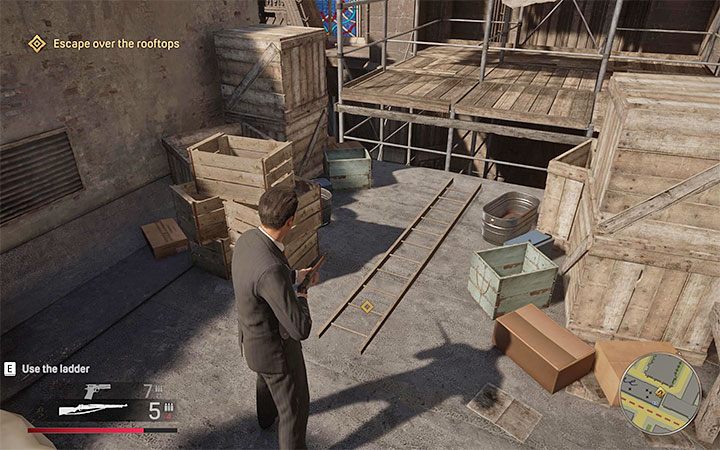 Ultimately, you have to reach the area shown in the attached picture. Interact with the ladder  Tommy will automatically deploy it to reach the scaffolding adjacent to the roof.

Run through the church 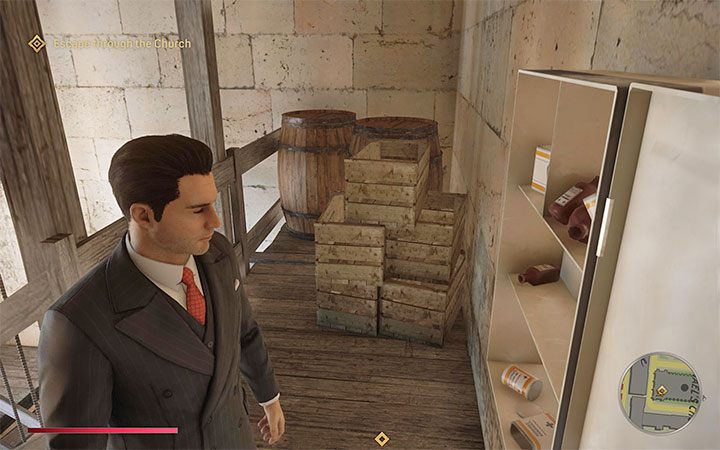 Climb the next levels of the scaffolding to reach the church tower. It is worth to go up a bit and use the first aid point. Then run downstairs. Once you get to the place where the funeral is taking place, a new cutscene will be displayed. 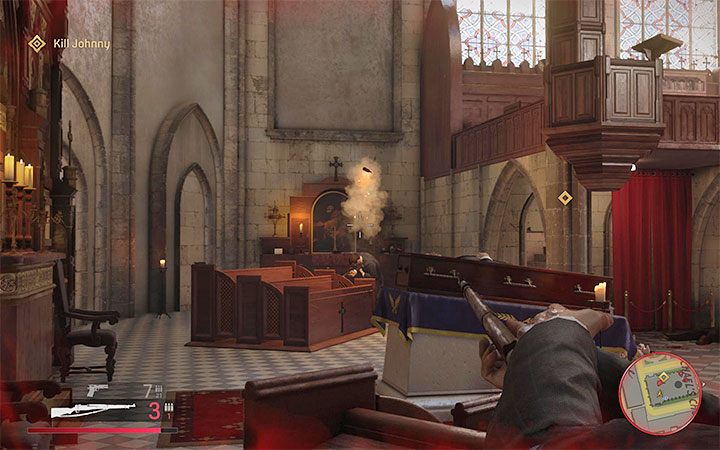 Initially, defend yourself near the area where the battle in the church has started. Look for opportunities to eliminate closer opponents, and if you have a rifle with you, you can also attack remote enemies immediately. 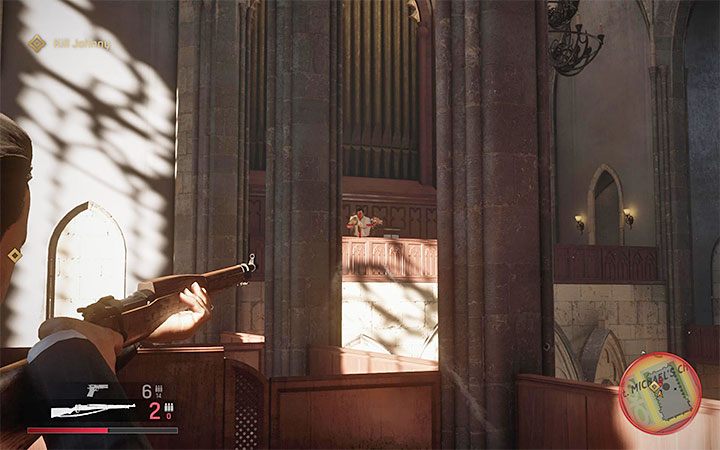 From the very beginning of the battle, Tommy will be fired upon by an opponent from a higher level. Reach the side stairs and climb them. Engage in more battles and look for opportunities to get rid of the aforementioned gangster who stands by the church organ  he is shown in the attached picture. 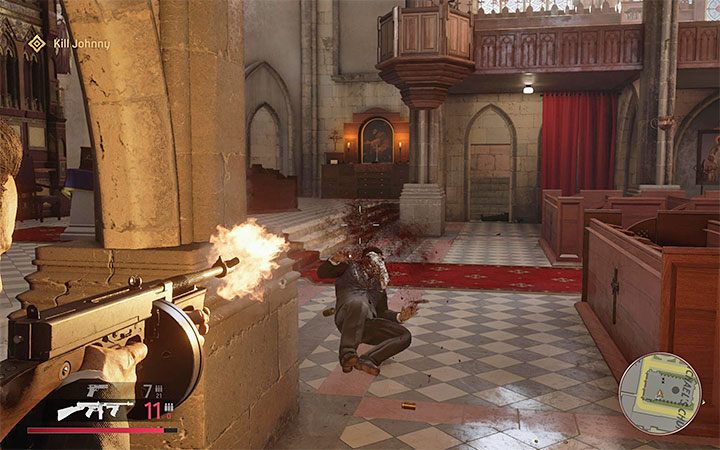 Stay on the upper level and head towards opposite balconies. Take your time in getting Johnny in order not to die too early at the hands of some minor mobster.

Continue the chase until you will be able to shoot Johnny. This should end the battle in the church.

Escape to Salieri with Sam 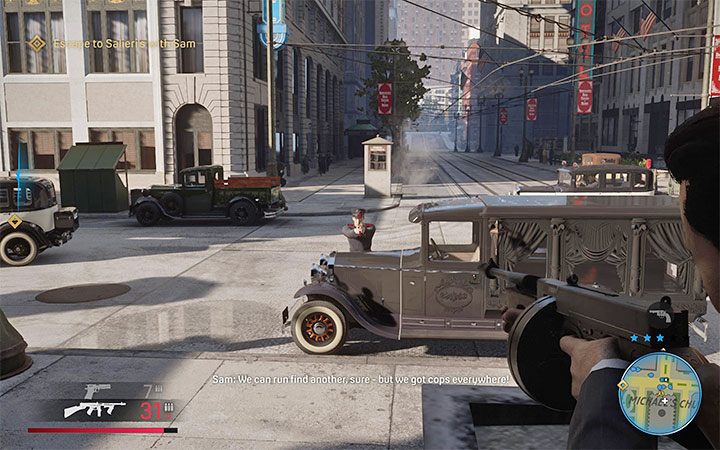 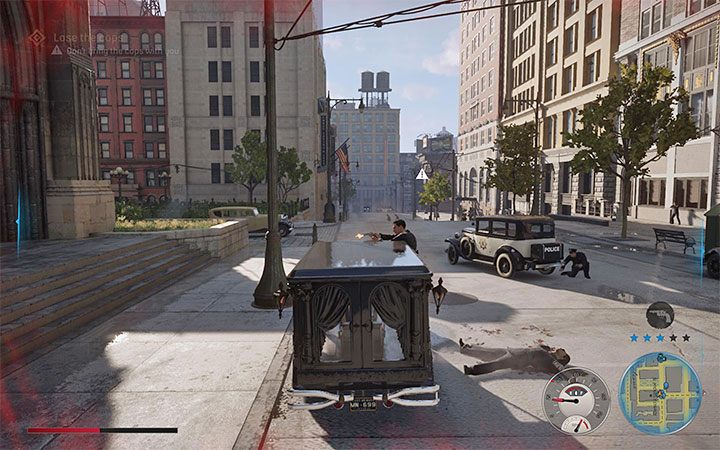 Head towards the hearse parked outside the church and wait for Sam to join you. Start the escape. 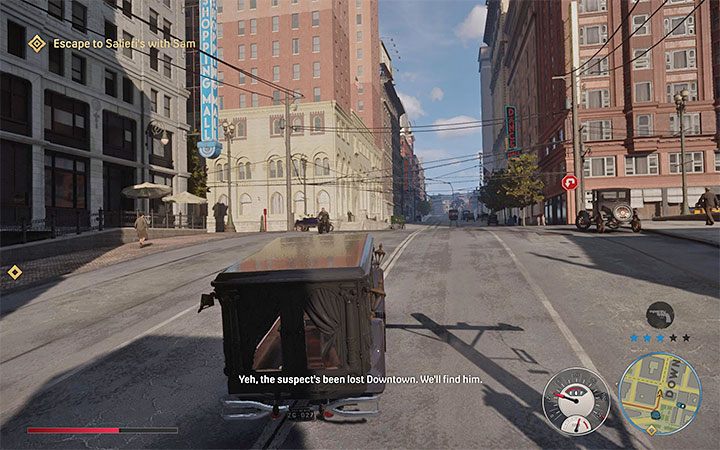 In order to lose the chasing police forces, look for opportunities to gain speed on long and straight parts of the road. Also, try not to collide with vehicles and objects in the vicinity. Use the option to ram cars if necessary (press the proper key to do so).

Once you've lost the police officers, you still need to remain low-profile and try not to get spotted for a while. Keep an eye on the mini-map and stay away from police cars and on-foot patrols. After losing the chase, drive to the Salieri's bar. During this trip try not to break any traffic rules in order not to start another chase.