On this page of our guide to Mafia Definitive Edition, we give you a detailed walkthrough of the 5th main story mission - Fairplay. This is one of the more demanding tasks. However, our walkthrough contains tips on how to sabotage the racing car of your rival and how to win the race. 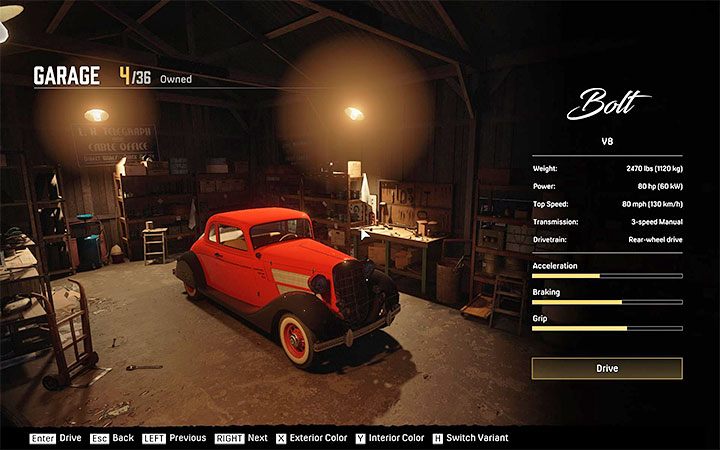 Go to the garage to talk to Ralph. You can then open your own garage where all the vehicles unlocked by Tommy are stored. New vehicles will be added to the garage by simply stealing them from the streets. You can steal a parked car with a lockpick or throw the driver out of the vehicle while while it's passing by. You don't have to go back to the garage with stolen cars. The game will classify a vehicle as discovered after you take control of it for the very first time.

You can choose any vehicle to complete the first part of this mission. This choice does not play any role, as the chosen means of transport will only serve to get you to the racetrack for the first time.

Meet with the guard at the Race Track

The racetrack is located a short distance west of the town. At this stage of the mission, you don't have to rush to get to the track yet. After you get close enough to the control gate at the entrance to the race track, the game will display a cutscene in which Tommy meets the friendly guard named Bobby.

Reach the Race Track garage with a guard

If you have a vehicle with two seats in the front, Bobby will get into it. Otherwise, you can use Bobby's car standing in the parking lot next to his security guard.

Drive to the racetrack. You need to get to the garage with a racing car in order to sabotage the vehicle. After listening to Bobby's comment, get into the racing car to start it.

This is the first challenging part of this mission. You have a limited amount of time to reach the workshop of Lucas Bertone, which varies depending on the level of difficulty you choose. For example, at a normal it's 3 and a half minutes. If you're late, the mission will fail. Here are some of the highlights of delivering a stolen race car to the garage:

During this and the next ride, you will almost certainly get the police's attention. Don't stop to collect a ticket, as it is prohibited to drive a race car on city roads. Take advantage of the fact that your machine is much faster than the police cars. As long as you maintain high speeds on long straight roads, you will lose a police chase without any problems.

Remember that you can't be chased when you get to the garage. After you lose the law enforcement officers who were chasing you, remember look at the mini-map every now and then to avoid the police cars patrolling the area.

Travel to your destination by using a mini-map showing the optimal route. Be careful while driving over a large bridge, as you need to make a sharper turn into a side street and it will only be successful if you don't drive too fast. Drive into the garage and watch the cutscene in which Tommy meets Lucas Bertone.

Return to the Race Track

This part of the mission is also a race against time  you have to go back to the Race Track where you previously stole a race car.

Once again, on your way back to the Race Track, you have to be aware that you might be spotted by the police. However, the tactics remain unchanged - try to drive as fast as possible and avoid collisions and large skids.

The timer will disappear from the screen after you pass the gate and enter the Race Track. Finish your journey and drive into the garage to park the race car.

You can find a detailed walkthrough of the car race below. If you're looking for even more detailed tips, check another section of our game guide How to win the race? available in the FAQ section.

The race consists of 3 laps  you start in 16th position and have to finish the race in the 1st place. Be careful once you reach the first turn, which is a sharp U-like corner. Prepare for this by braking in advance.

Another treacherous spot on the track is the chicane shown in the screenshot above. Don't try to overdo it, as there is a high risk that your vehicle may slightly jump out the track. As a result you may lose control of your race car.

During the entire race, don't rush it with overtaking all other competitors as quickly as possible. Try to overtake them one at a time by braking near successive turns and by driving around them on the inside or outside lane of the track. If you're playing with a Simulation Driving Mode enabled, then you should also avoid adding too much gas before you complete a turn. Otherwise there is a high risk of skidding.

If you didn't make any mistakes, then you should have taken the lead during the second lap. However, the most important thing is the final part of the third lap of the race - drive through all the final turns and hit the gas down in order to get to the finish line.

After regaining control of Tommy, begin a linear march through the racing paddock. Along the way, you can chat to people who want to congratulate Tommy on his victory - they are Sarah, Vincenzo, Ralphie, Frank, Lucas and Sam.

A drunk Paulie can be found shortly after leaving the paddock. Help him get in the car.

Take Paulie to his house, or the Blue Tropics club. 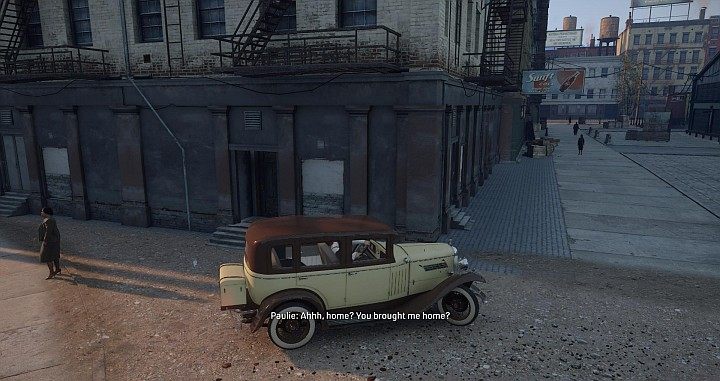 The final part of this mission has two endings  a more obvious one, and a hidden one.

The first option involves taking Pauli to his house. It's very simple. No one will attack you, but try not to break traffic laws & regulations. Leaving Paulie at his home in Little Italy will end the mission. 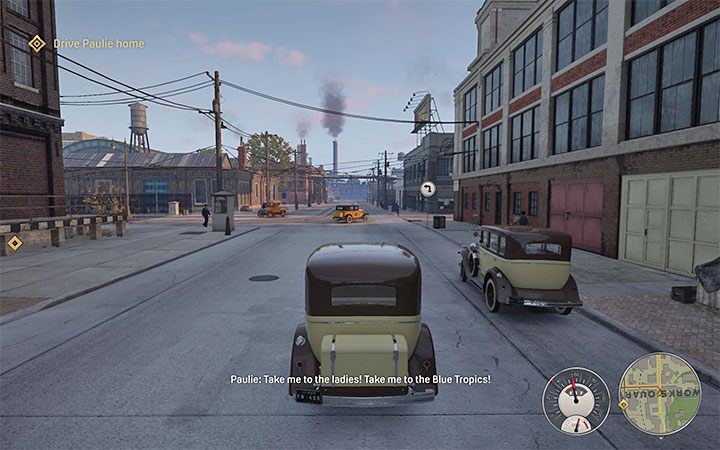 Then, there's the hidden ending. It involves taking Pauli to the Blue Tropics club, which you can learn during the ride. 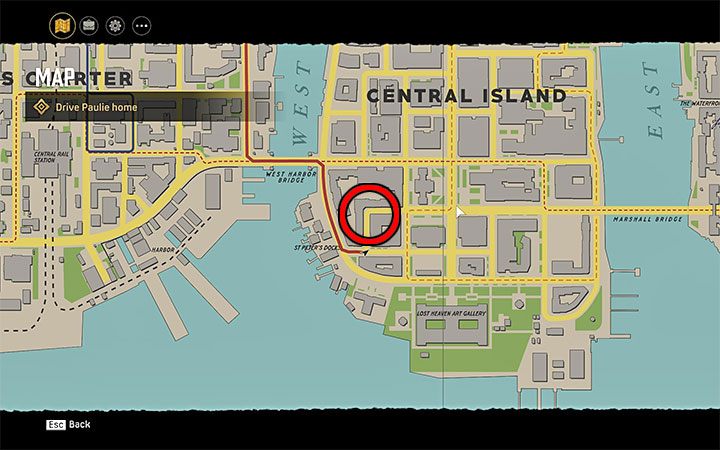 The location of the blue tropics club is shown in the above picture-it is located in the southern part of Central Island. 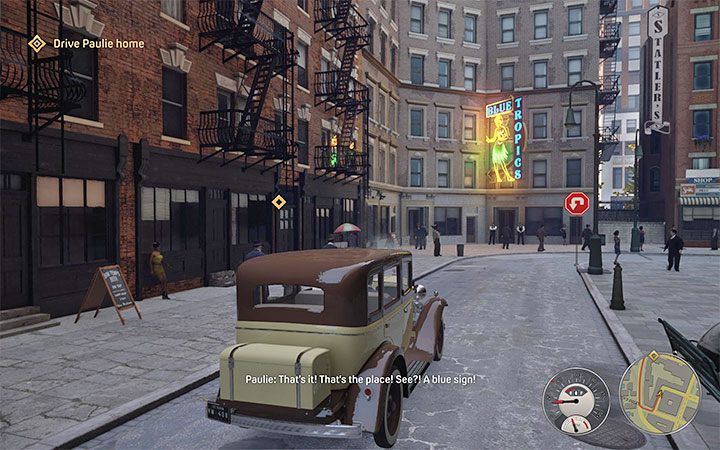 When you get there, you'll recognize the club by a large neon sign. Park in front of the entrance to complete the mission.

Completing the mission with the alternative ending is rewarded with the Not Classy achievement.