Obviously the first thing you have to do here is to choose one of the purchased torches from the inventory, however you won't have to light it up right away. Proceed towards the nearest entrance which leads to a much bigger cave system. As you've probably noticed, you will have to follow a strange woman. Start off by going to your right. Light up your torch, because it's going to get dark here. Start moving forward and watch out for bigger holes (screen). I wouldn't recommend running here, especially since you won't have to worry about running out of torches. 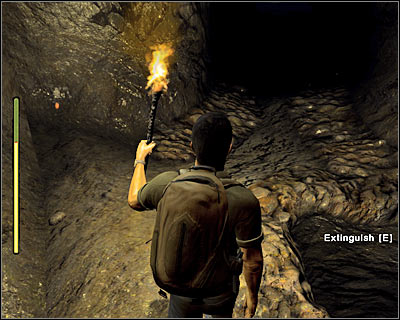 Remember to extinguish your torch each time you hear bats flying towards you. This isn't a necessary thing to do, but it'll allow the torch to last longer. Otherwise you would have to replace it with a new one sooner than you've expected. You should be able to enter a much larger cave very soon. There's a new torch to your left (screen), so you should consider picking it up right away. You'll also find a food box here. Take it, because this object is worth 10 dollars. Head on to your right. Extinguish the torch and walk through the waterfall. 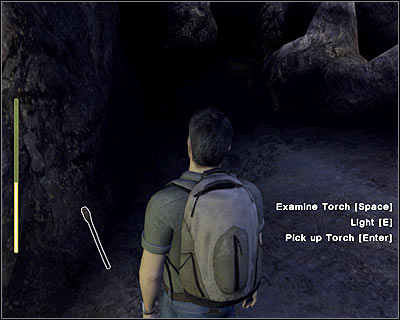 Once you're inside a new corridor, I would recommend that you go to your right. Be careful, though. It's very easy to die here, so stay on the main path. Find and collect a second torch. Look at the screen if you're having some difficulties finding it. You may proceed to the next section. There's only one passageway leading to the next area of the caves, so it shouldn't take too long for you to find it. 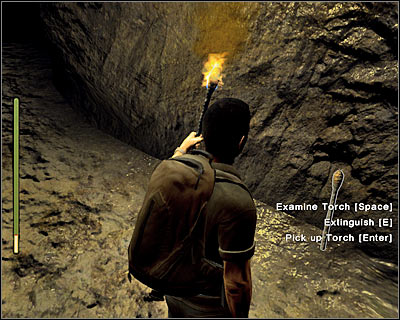 Once you've reached a small junction, DON'T go left, because you would have died there. Instead, turn right and start moving forward. The path hear is very dangerous (screen), so you should be moving very slowly. It's also a good idea to make a stop each time you have to light up the torch. 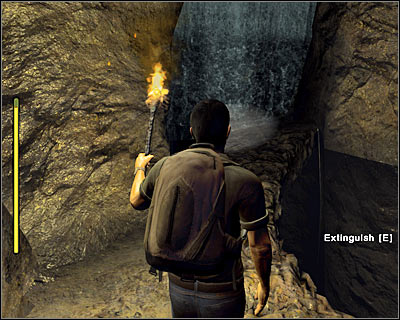 Now you will have to turn left, because that's where you'll see a woman (screen). You can also keep listening to her voice in order to navigate through the caves. Eventually you'll end up standing inside a larger cave. Extinguish your torch and head on towards the water. You don't have to go right, but take your time to explore the surroundings. There should be a second food box here. Once you've taken it, light up the torch and move forward. 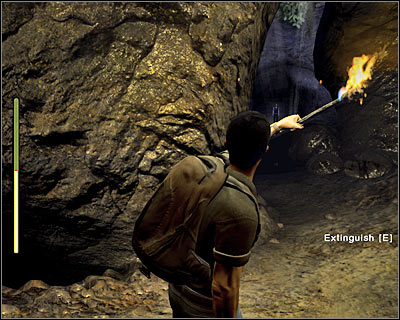 Reaching the final area of the caves shouldn't take you more than a few seconds. Extinguish your torch here, because you won't need it anymore. Approach a woman and try talking to her by pressing the ENTER key ("Talk to Lisa" action; screen). You will be rewarded with a new vision. Approach the ledge and press the ENTER key once again. This will allow the main character to jump down. Wait for the game to display a short cut-scene. 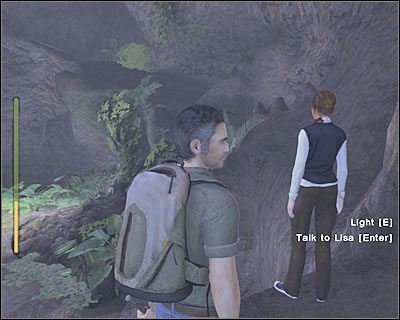 You won't have to explore this area, because you wouldn't find anything of interest here. As a result, turn right and approach the body of a dead woman. You should be able to find a compass here. Obviously you will have to take this item by pressing the ENTER key. This will trigger a longer cut-scene and this episode will come to an end. 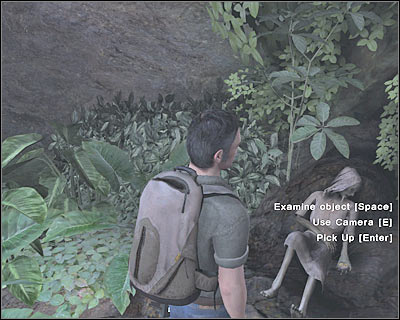