The third chapter of the game will require you to take care of a large number of smaller tasks. You'll also spend a lot of time exploring the island. Once again, you will have to enter the jungle, however this time you'll only be going against armed hostiles, not the deadly black smoke. Once you've found the hatch, you will be allowed to proceed to a new cave system where you'll have to collect an important item. 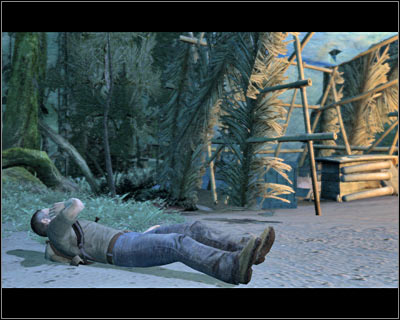 QUEST 1: Get my laptop working

You'll start the game near a completely new campsite. You haven't been here before, so you should consider spending a lot of time exploring the beach. Obviously you should focus mostly on collecting water bottles and coconuts. There are going to be a lot of these objects in the area. You should also consider talking to some of the present survivors. Start off by talking to Hurley (screen). Ask him a few general questions:

- Who do you think attacked us?

- What do you know about Kate?

As for the quest-related topics, you will have three choices:

- I found my camera.

- I found my laptop but it's busted. 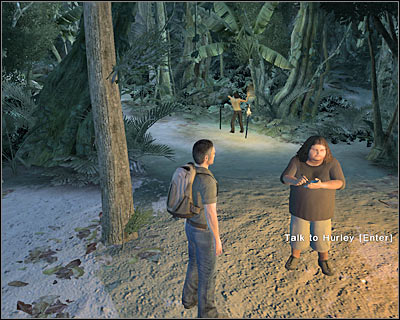 Locke should be standing next to Hurley. Examine the backgammon board before you decide to talk to Locke. As for the conversation, you should start by asking him questions from the first category (Quest), however the second category will also include some new topics:

- I met some people out there.

- What do you know about Charlie?

Make sure that you've used up all available dialogue lines, so you'll find out everything. You may proceed to the main area of the campsite. It would be a good idea to find Jack (screen). Talk to him. Just as before, you'll be rewarded with some new general topics:

- I think I've been seeing a ghost from my past.

- What do you know about Locke?

End this conversation once you've chosen all quest-related questions. 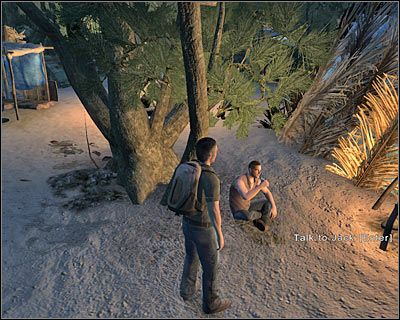 The next survivor in line is Sawyer (screen). You will have to ask him some of the previously added questions, as well as a new one:

- What do you know about Jack?

Don't close the conversation window just yet. As you probably remember, you are allowed to trade goods with Sawyer. I assume you've used up most of the slots in your inventory, so you'll have to free up some space before proceeding to the jungle. I would recommend selling coconuts and papayas, because they're not too valuable. Sawyer will offer you two new things:

You probably don't have enough goods to acquire a gun, so you should consider buying the ammunition. Make sure to sell some of the cheapest items, because you won't have any problems collecting more of them later during the course of the game. 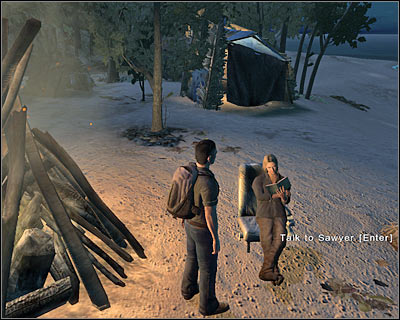 Take your time and explore the entire campsite. You should be able to find a lot of coconuts here. Additionally, there's a wheelchair near the jungle entrance. Look at the screen if you're having some difficulties finding it. Move back and take a picture of an entire wheelchair. You should receive a confirmation that you've started one of the subquests. Don't worry, because you'll find two remaining items later. You can't photograph them here and now. 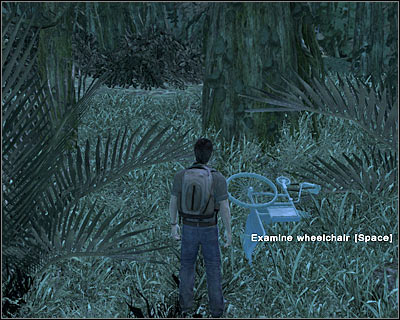 Once you've explored the area and talked to some of the survivors, proceed to the main road leading to the jungle. Sayid should be standing here and you must to talk to him (screen). The general questions will remain the same, so make sure that you've focused on quest-related topics. You'll find out that Sayid needs a battery in order to repair the laptop. He will direct you to talk to Locke. 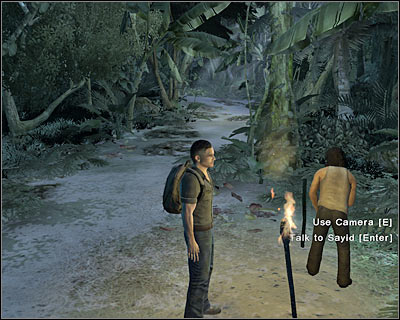 I'm sure that you still remember where to look for Locke. He should be sitting near a fireplace. Talk to him and choose a new topic from the list:

Locke won't cooperate with you, but it's not a major problem, because you'll have to participate in a new flashback scene. 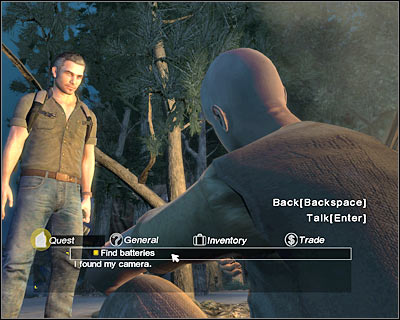