This page of the Lost Judgment guide provides a walkthrough of the Boxing Club from the School Stories. We explain the rules and controls of boxing fights. At the end of the page, we have listed all the boxing skills. 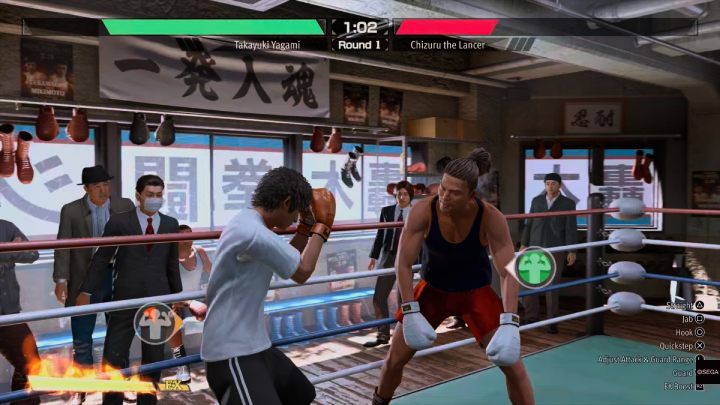 The boxing club base is located near the homeless camp. This club will be unlocked after reaching Focus level 2. After receiving Amasawa's message, go to the MRC headquarters to review the details.

The first conversation with the club's coach won't prove very fruitful. Approach him again and select the Taunt dialog option. Todoroki will let you face him in the ring, giving you the chance to learn the controls of boxing fights. Follow all the recommended steps to complete the tutorial.

After the tutorial, it's time for some real sparring. Talk to your coach again and get ready for your first fight. Iwashita won't be an especially challenging opponent. Watch your stamina level and try to attack your opponent as soon as he finishes his attack combo. 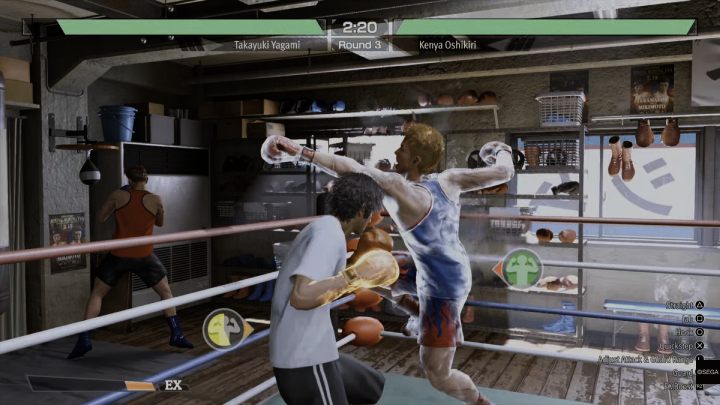 After winning this fight, the coach will accept you into the club. The next opponent will prove too strong for you. No matter how many times you try, you won't be able to beat Oshikiri at this point in time. Stay in the ring until the end of round 2. After a short cut-scene, your opponent will become even more aggressive. Avoid his punches, especially the jumping ones, and endure another round. Remember that after 3 knockouts, you will lose the fight and will have to start the battle all over again. 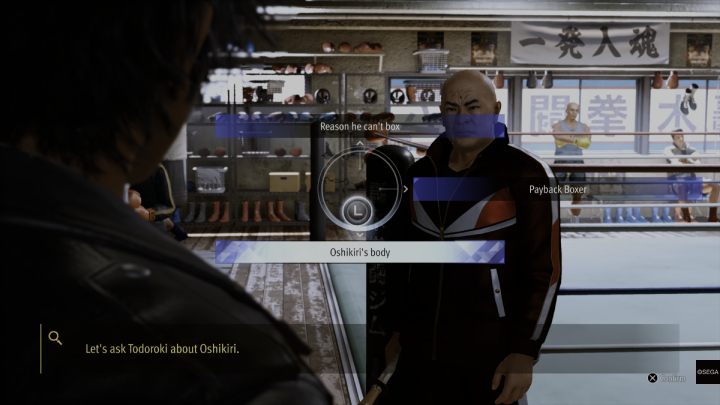 After the fight with Oshikiri, talk to coach Todoroki. Select all dialog options one by one, then talk to him again and buy some skills. Choose a sparring partner and practice your new skills and moves. To be eligible for the next fight, you must win a sparring match against each club member, depending on the difficulty category. 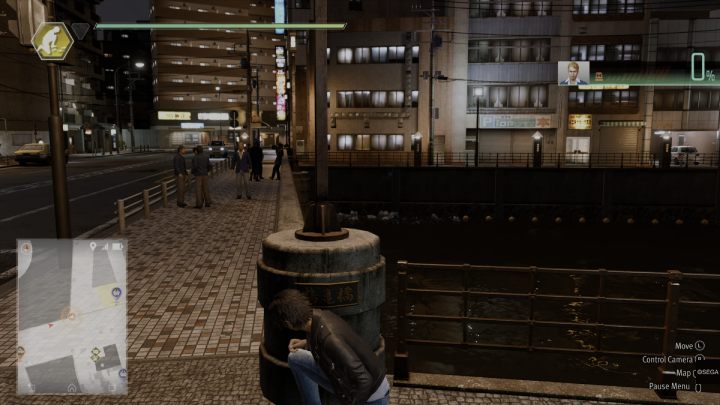 After defeating 3 enemies, a cut-scene will play, followed by a investigation section. Oshikiri will first walk past the homeless camp, turn left and head to the Bar District. The task will end in a small park by the Survive Bar.

When the cut-scene ends, defeat all opponents in the street fight and return to the boxing club headquarters. After talking to the coach and Amasawa, new opponents will be unlocked. After completing all the sparring matches, it's time to fight Gaku Onidake. 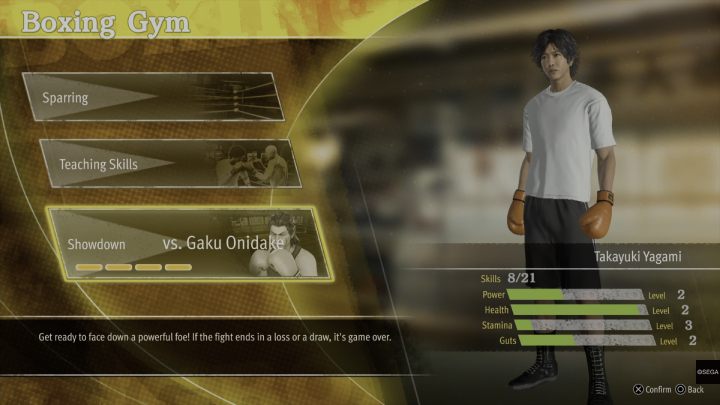 Onidake is a fairly versatile boxer, but his set of punches is very easy to remember. Once you learn all his attacks, the fight will not be particularly difficult for you. Keep a good distance from your opponent and watch your stamina level, as some of Onidake's attacks can stun you.

After winning the fight, Onidake will invite Yagami for a drink. Meet him in front of the boxing club and during the conversation, ask him about the details of the investigation.

The next visit to the club will begin with a cut-scene. Upon leaving the club headquarters, Yagami will receive a message from Amasawa. Go to the school and talk to her in the MRC room. Then return to coach Todoroki. After the cut-scene, you will unlock level 2 sparring matches.

Once you defeat the 4 new sparring partners, another cut-scene will play and you will be challenged by a new opponent.

Chizuru the Lancer is able to get through Yagami's punches, so the key to avoiding damage is to dodge to the side. Chizuru tends to chain 3 attacks, one after the other. If his body starts glowing red, the opponent will immediately deliver an uppercut punch with his right hand. The best way to beat Chizuru is to attack him right after his punch combo. In particular, charged attacks will exhaust your opponent, giving you the best opportunity to deal damage to him. 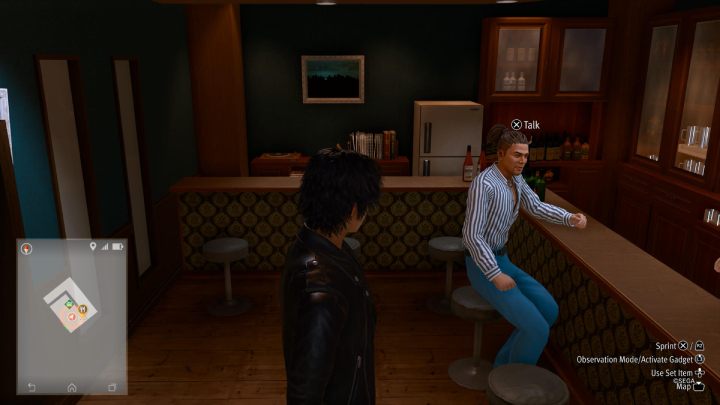 After winning the fight, Sakuma will invite you for a drink. Meet him at the Rodriguez Bar in the Bar District and ask him all the details about the Seriyo High School student.

You won't be able to progress further in the boxing club until you reach Chapter 5: Double Jeopardy.

Return to the boxing club headquarters and beat the next 2 sparring partners. After talking to your coach, head to the burger joint in the North Jinnai Station district. After the cut-scene, order a burger.

The next time you enter the club, you will meet your next opponent. Talk to your coach and beat the boxer Kozo Wakita.

Wakita is very tough and can defend himself very well. To break through his defences when he blocks, you need to perform a strong punch (circle/B) and then continue the offensive with a series of punches. After winning the battle, the next opponent will be unlocked. 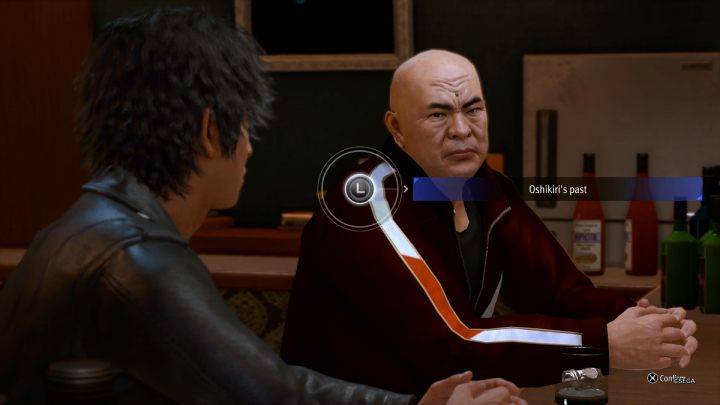 When you defeat Sannabe, leave the club. Outside the door, Amasawa will approach you to talk. After chatting with the girl, return to the club and defeat Takeru Mikimoto. This opponent is a very aggressive boxer. It's hard to predict what attack he'll use next, so make sure to dodge instead of blocking. His weak point is defense.

Once you have defeated Mikomoto, coach Todoroki will invite you for a drink. Head to the Rodriguez bar and ask him all the details of the investigation.

You won't be able to progress further in the boxing club until you reach Chapter 8: Phantom of Ijincho.

Return to club headquarters and continue the sparring matches. After defeating Yum Won Sen, Amasawa will call Yagami. Meet her in the MRC room to learn some new information.

When you return to the boxing club, you will once again be able to face Chizuru the Lancer in a fight, but he will be much stronger this time. His punches have a long range, so you have to watch out for his every attack. 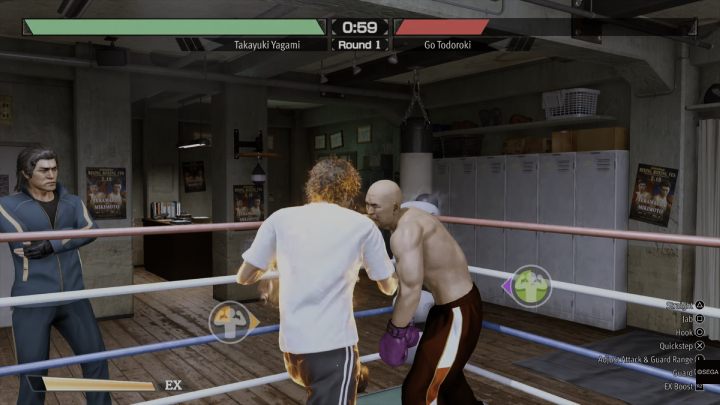 The next opponent will be coach Todoroki. Go Todoroki is very resilient and can deliver an attack combo that is hard to avoid. The best times to counterattack are moments when Todoroki will pause to catch his breath after delivering a stronger blow.

After winning the fight, leave the club. When Amasawa calls, meet her at the school. When the conversation ends, approach her again and select the I'm good dialog option. Dress up Yagami in any outfit and watch the cut-scene. 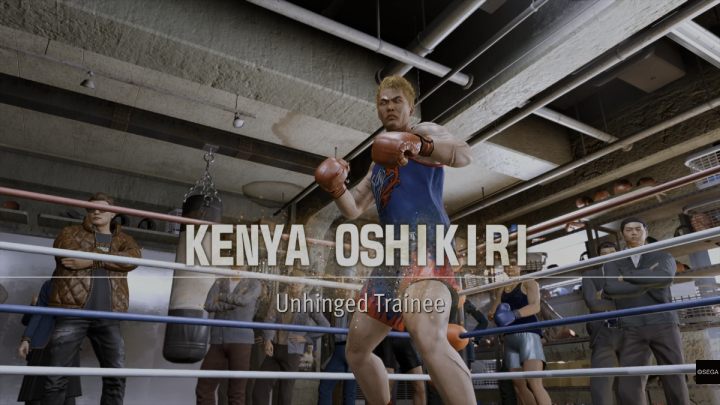 Return to the boxing club headquarters and participate in the final fight against Kenya Oshikiri. The fight will be divided into 3 stages. In the first stage, Oshikiri will prove to be an underwhelming rival. He will leave himself open to punches and will not be overly aggressive. Knocking him out shouldn't be much of a problem for you.

In the second stage, Kenya will fall into an enraged state, during which he will become extremely resilient. He will also start attacking far more frequently. Try to take as little damage as possible and survive all 4 rounds to eventually win the fight.

In the third stage, Oshikiri will again be more vulnerable to your attacks. Avoid his charged punches and use the skills you bought to knock out your opponent quickly.

After winning the fight against Oshikiri, Yagami and the rest of the club members will be attacked by a gang. Defeat all opponents to complete the investigation. 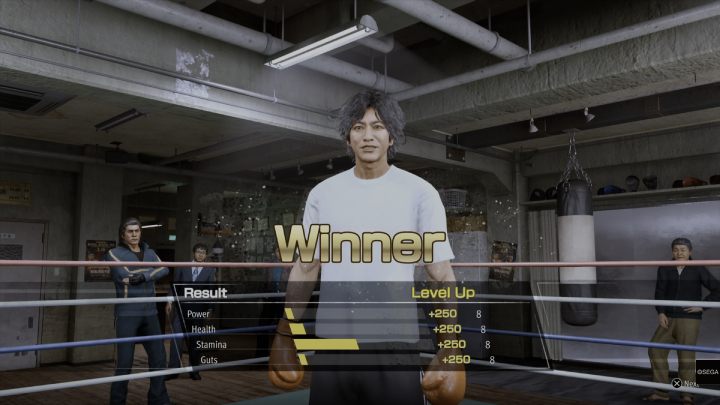 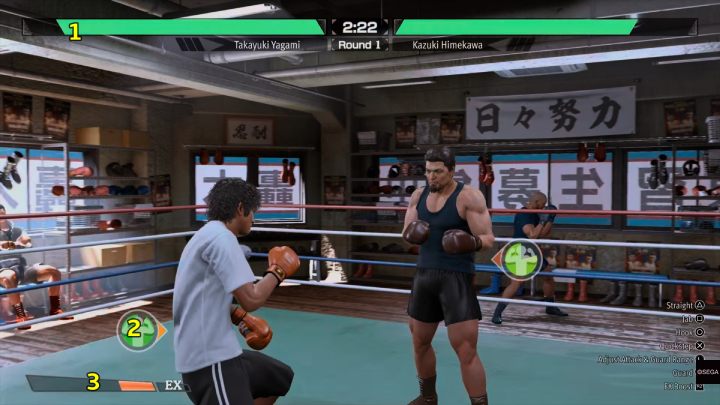