On this page of the Lost Judgment guide, you will find a walkthrough of the Robotics Club related to School Stories. We explain what robot battles are all about and which parts are best to get. At the end of the page, we have included the best robot builds and tips that will help you win every match.

Robot battles are certainly one of the most challenging mini-games in Lost Judgment. With our tips, you will learn how to win the duels fast and how to build robots to reach the finale without any problems. 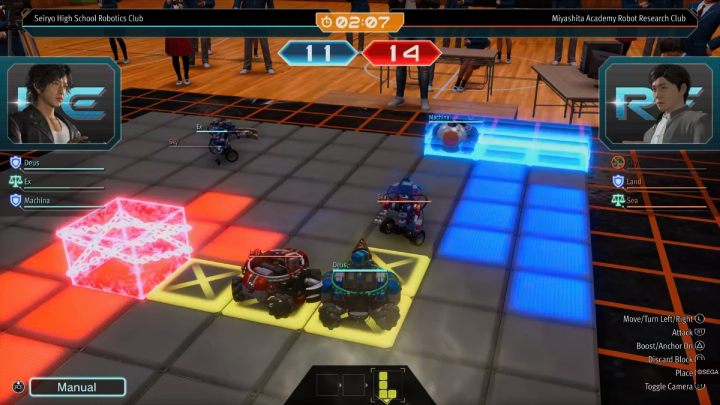 The club is on the 4th floor of the school.This club will be unlocked when you reach 50% progress in Dance Club. When you are outside the school building, Amasawa will send you a message requesting a meeting.

During the investigation of the Robotics Club, you will participate in a mini-game that has elements of chess and Tetris. You have to arrange the elements in such a way as to take control of the board.

Before the final battle, you will face 19 teams. The first few enemy robots should not pose much of a threat to you. The gameplay gets complicated when the progression in the club reaches about 50%. Opposing teams will now have more powerful robots equipped with deadly weapons and numerous upgrades.

After meeting with Amasawa, head to the 4th floor of the school to the Robotics Club. After the cut-scene is over, talk to all the club members. Once you are introduced to the club, the robot fights tutorial will begin. After it, you will have your first match. Try to place the blocks in such a way as to get to the enemy base as quickly as possible. Taking over the opponent's base gives you an immediate victory.

After winning the first battle, you will be accepted into the Robotics Club. Return to MRC and report back to Amasawa. 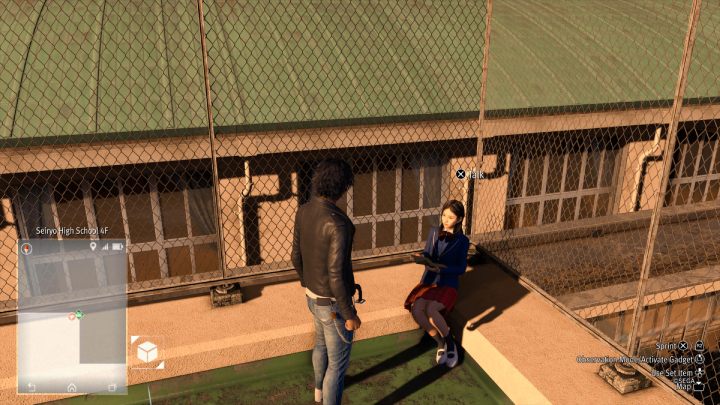 When you return to the Robotics Club, the club president will teach you about creating and swapping robot parts. After that, leave the room and watch the cut-scene. When talking to the teacher, select all the dialogue options one by one.

Head back to the club and compete against Otsuka Technical High School. After winning the fight, go talk to Amasawa again. Then go to the school's roof and talk to Itokura. 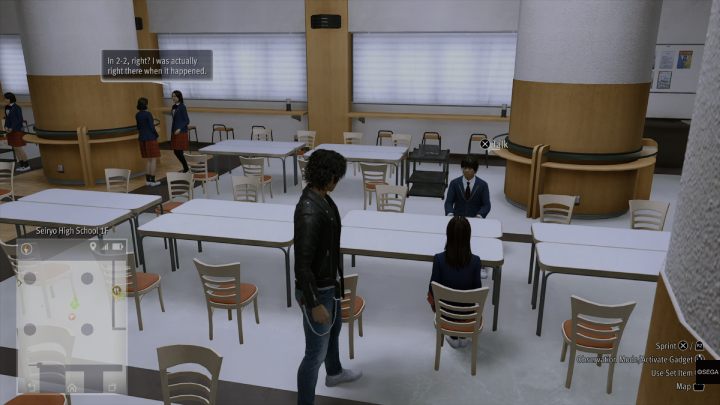 Beat another team in an official game, then go to the 1st floor of the school and talk to a club member sitting in the cafeteria. Return to club headquarters on the 4th floor and win the next game.

Re-enter the Robotics Club. During the conversation, choose Why not have an idea meeting?

After defeating the next team, watch a short cut-scene. Then meet with Amasawa. Go back to the Robotics Club and talk to Sakura. The boy, along with Itokura, will be waiting for Yagami in the cafeteria.

Return to the club and beat the next team. After winning the fight, Akuta will show up. During the conversation, select Defend the Robotics Club. You will participate in another match against the Meiga College Robotics Club.

Further progress in Robotic Club will be blocked until you reach chapter 5: Double Jeopardy.

Head to the club and then visit Amasawa, who will introduce you to new information about the investigation. 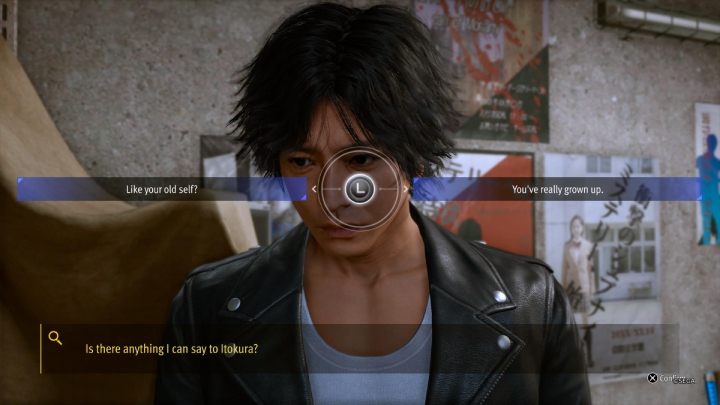 Beat the next enemy teams. After winning a few games, an argument will occur between the club members. Return to the Robotics Club and watch another cut-scene. Then go to the MRC and talk to Itokura. Return to the club president and report on the conversation with Itokura.

Further progress in the club will be blocked until you reach chapter 8: Phantom of Ijincho. 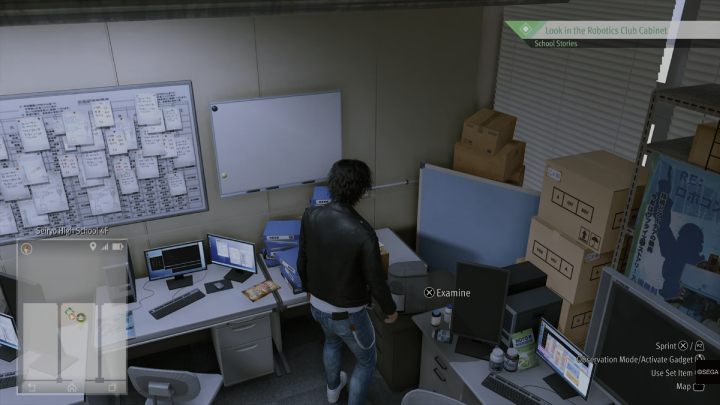 After beating another team, a teacher will visit the club headquarters. After a few cut-scenes, return to the Robotics Club. When you beat the next team, you will receive a locker key. Open the locker, then go to the cafeteria and talk to Karumazuki-kun.

After the cut-scene and the newly acquired information, head to the designated location on the map - in the Isezaki Road district. Use a lockpick to open the door. When you go outside, there will be several opponents waiting for you.

Return to school and go to the club. After the cut-scene, you will be able to participate in the finals. For this battle, you must change the main robot's hull to Jack in the Bot. Also, equip it with the best possible shield. Time to face the last opponent. 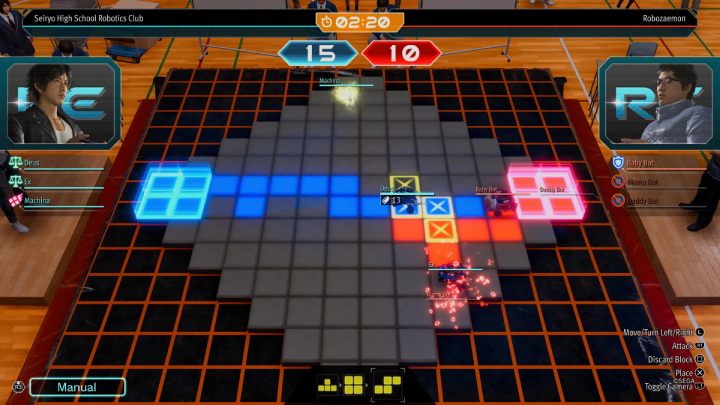 The easiest way to win quickly is to arrange the blocks in such a way as to get to the enemy base and take it over as soon as possible. The entire board will then be taken over by your team, and the game will end before the time runs out.

As you progress through the club and defeat more opponents, you will gain access to new and more powerful robot parts. Below you will find our robot builds we used in the last game before the finals.

If you can't make these parts yet, choose a component of the same type with less power and continue robot battles to unlock the best equipment. 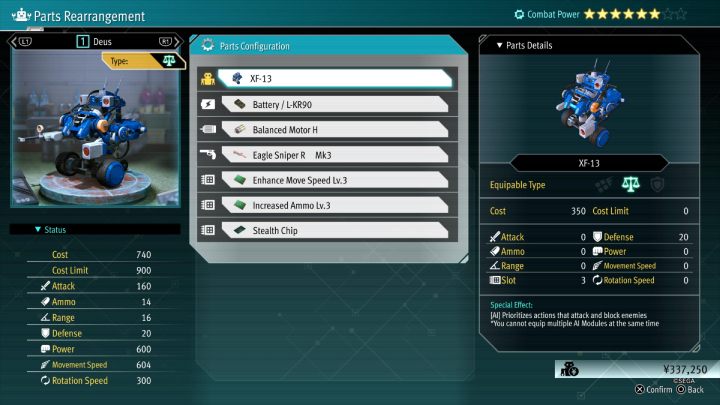 Our main robot was equipped with the best XF chassis model, optimal battery, and Balanced Motor H. To eliminate enemy robots quickly, we equipped Eagle Sniper, and the module that provides additional ammunition. Our robot also had level 3 acceleration and a Stealth Chip, which made it less likely to be attacked by the opposing team. 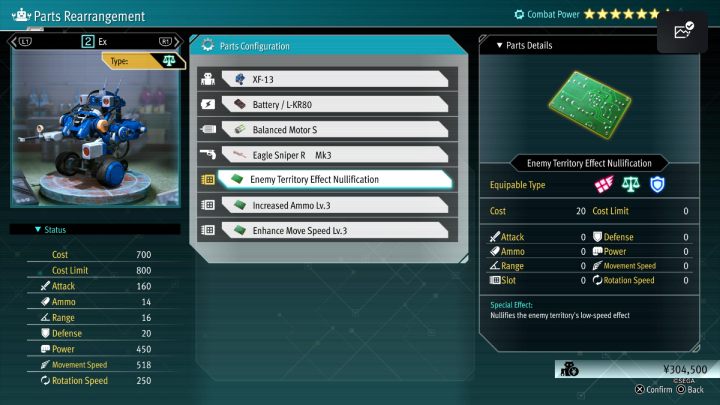 The Ex robot was constructed similarly to the main one controlled by the player. It received the XF chassis, the best battery, and the Balance Motor S. As weapons, we again chose the Eagle Sniper and extra ammo in the modules. The robot also had increased speed and a module that cancels negative effects in enemy territory. 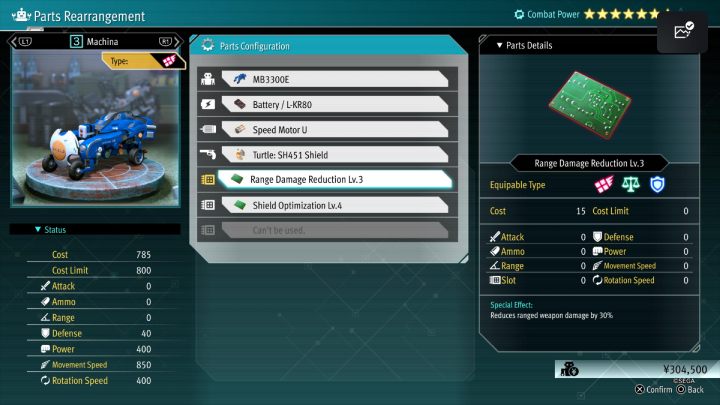 The Machina robot served as our block collection helper. It was equipped with an MB chassis, optimized battery, and Speed Motor U. To make it as safe as possible, it was given a shield and a module that strengthens the shield. It also had a module for reducing ranged damage.

For the first few battles, focus on getting blocks and quickly taking over the enemy base. The enemy robots will not be aggressive and will rarely attack you. Your allied robots won't do much for now either, so you'll have to be the one to pick up the blocks.

When you unlock the ability to create and swap parts, invest in better batteries and motors for your robots first. Choose modules that increase speed and turning. Once you have the right materials, equip your machines with ranged weapons. 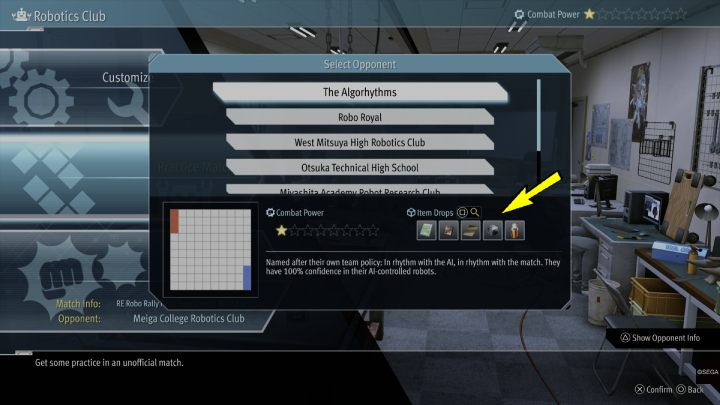 You receive items to create parts after winning fights in qualification or practice matches. You can find detailed information about the items received from winning practice matches by selecting your opponent and pressing the Square/X button. You can buy the rest of the items at the extract stores or at the General Goods Cart in Hamakita Park. 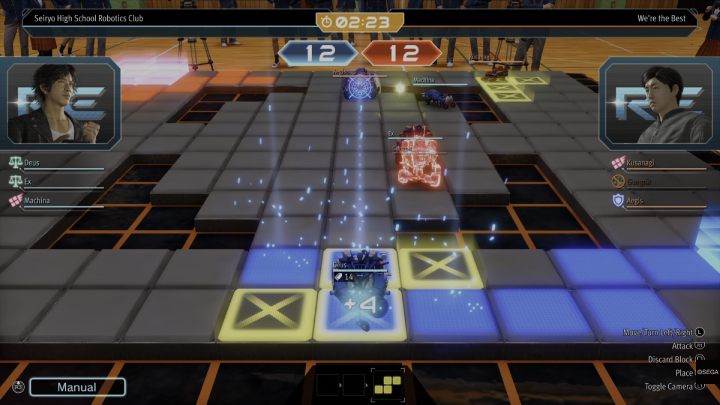 After a few easy victories, you will definitely notice a sudden increase in difficulty. Enemy teams will attack your main robot more often, collect blocks faster, and try to take over your base. Fortunately, you will have the allied robots (as long as you equip them with the right components).

When the match begins, immediately try to eliminate enemy robots. A sniper rifle will work best here - one accurate shot can destroy the machine of the enemy team.

Remember that you can fire ranged weapons only while standing still. When a robot attacks you with a regular weapon, it may start pushing your machine, making it impossible for you to defend yourself. Therefore, it is a good idea to shoot down the enemy as soon as they start approaching you. If you want to avoid this problem, equip your robot with a module that allows you to use ranged weapons while moving.

After eliminating all hostile robots, you will have several seconds to place a few blocks and collect new ones. Take the shortest path to the enemy base and position the last block to take it over.