The following page of the Lost Judgment guide contains a walkthrough of Chapter 10 Catch a Tiger. Our tips will guide you through the conversation with Yui Mamiya and in the Tokyo Detention Center. You will learn how to win the battle against Detective Watanabe and Kuwana. We also described in detail how to infiltrate the Geomijul headquarters.

At the start of chapter 10, you will have to complete any side quest while waiting for a phone call. Check out the Buzz Researcher or the bulletin board at the Yokohama 99 office, or take part in some street fights.

Once you have received the call from Sugiura, return to the Charles gaming arcade. 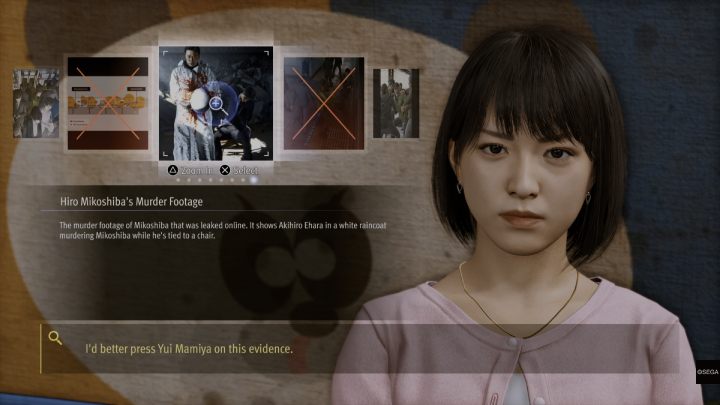 Talk to Yui Mamiya. Select the murder footage and Ehara's ticket as evidence in the case. Then relax on the office couch. 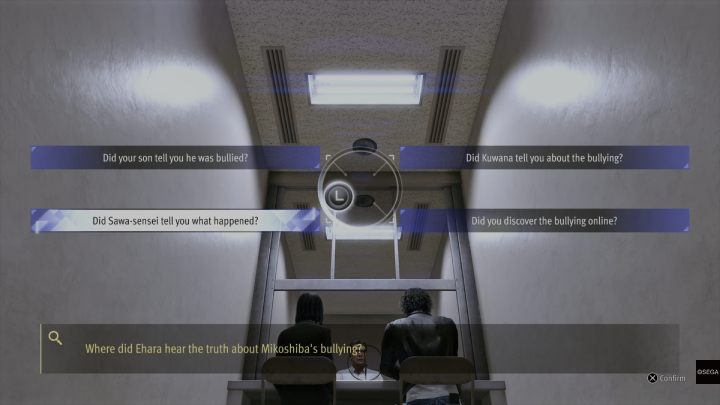 After leaving the office, head to the nearest cab and go to the Tokyo Detention Center. Show the man the murder footage, then select the Did Sawa-sensei tell you what happened? option.

In Genda's office, while talking to everyone, select the We should listen to Saori-san option.

Return to the Yokohama office and complete any side quest to push the plot forward. 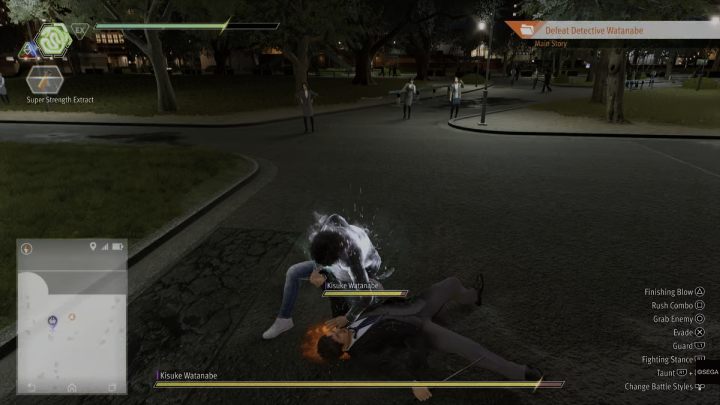 Walk down the main street in the Chinatown district to find Detective Watanabe. After the cutscene, the fight will begin.

Watanabe deals a lot of damage with his weapon, but unfortunately you can't take it away from him. The best way to defeat your opponent is to take advantage of his slow attacks. When he is about to swing, dodge and go on the offensive right away.

Extracts, such as the Super Strength Extract which gives a temporary attack boost, will also come in handy during this fight. 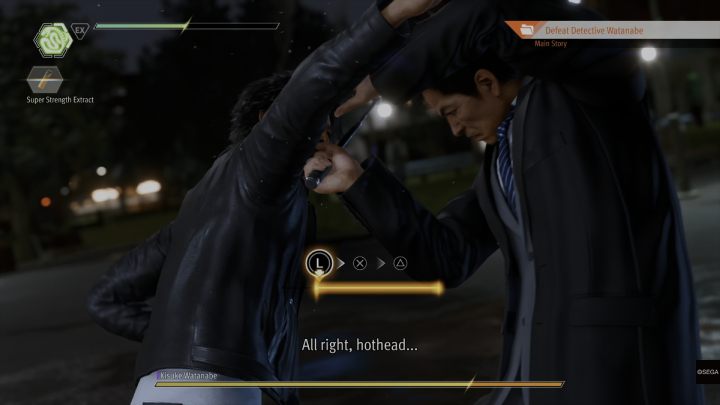 An animation will be triggered once the opponent's health bar drops down to yellow. Follow the directions on the screen, otherwise Watanabe will throw you into the river and you will have to restart the fight from the beginning.

After defeating the detective, head to the location marked on the map. 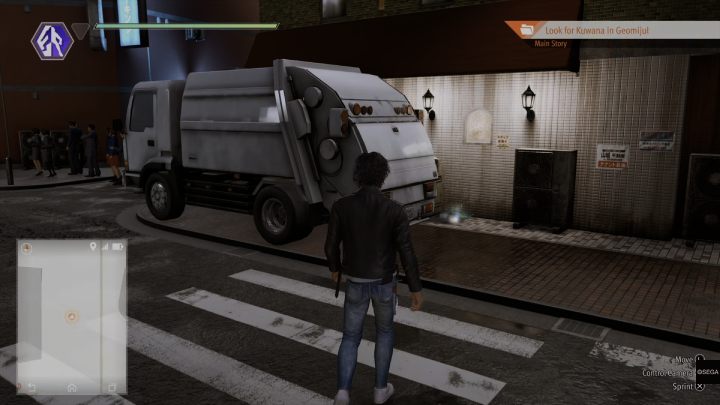 The entrances to the Geomijul headquarters will be blocked off by police. Walk slowly between the white truck and the building and turn right to avoid the police officers. 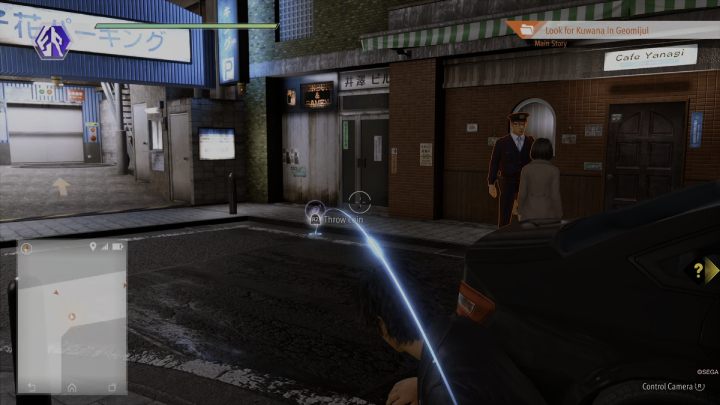 Follow the street to the next checkpoints, distracting the police officers. 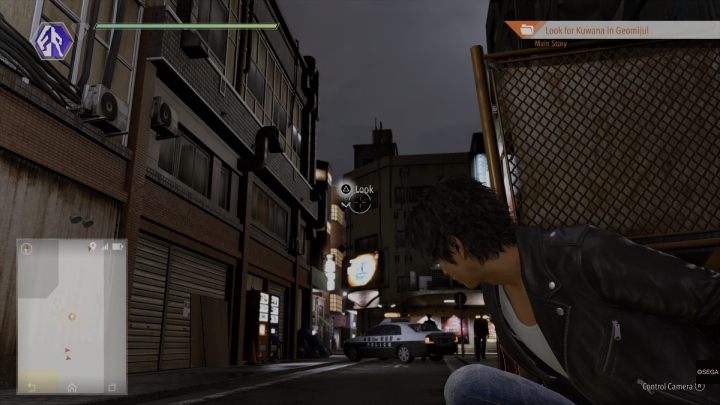 After reaching the 2 police officers standing by the door, look closer at the drone flying over the car. Once Tsukumo has distracted the police officers, approach the final checkpoint. 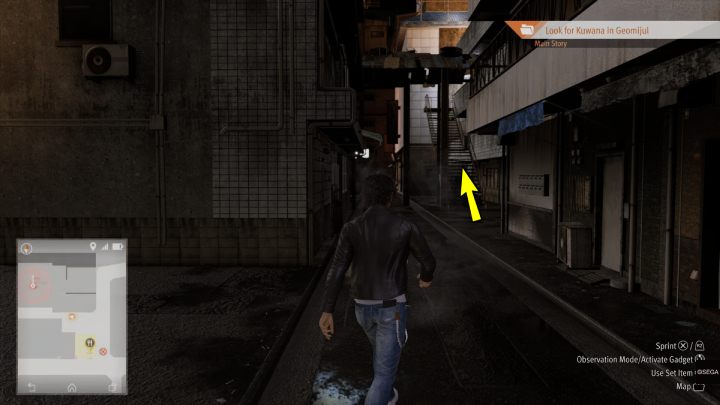 Head up the stairs and enter the Geomijul hideout. After the cutscene, slowly walk past the talking men, reach the stairs and head to the roof of the building. 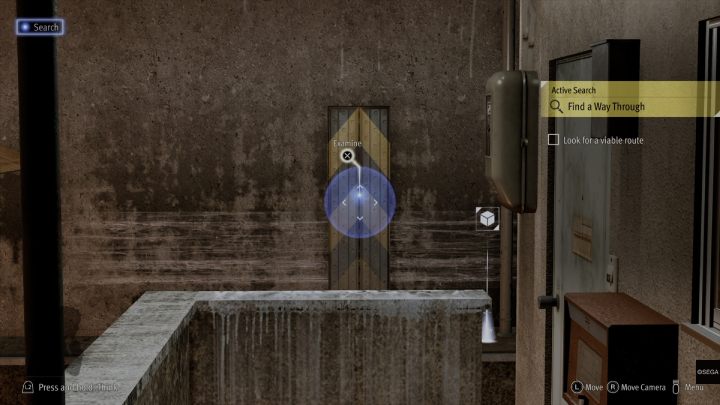 In search mode, approach the end of the railing and examine the beam with the yellow stripes. 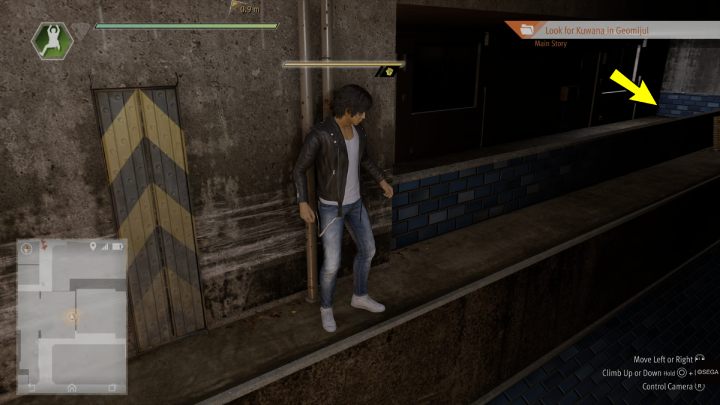 When Yagami jumps to the adjacent building, go to the right first. The Motivator Shirt SSS is lying on the terrace.

Return to the beam and jump on the pipe to go left. 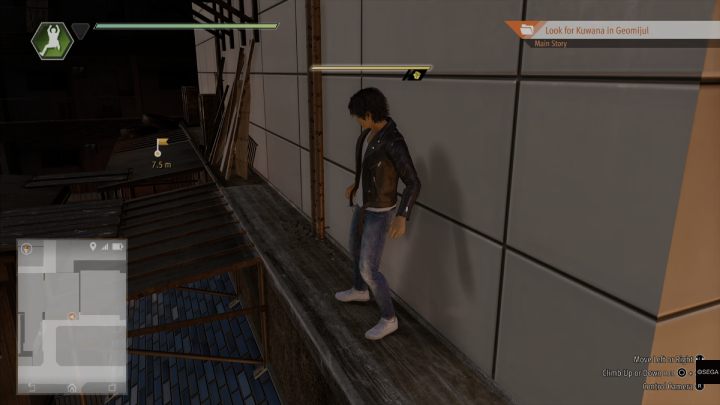 Head along the plank to the left and jump over the tin roofs. Then jump on the pipe and head to the next marker on the map. 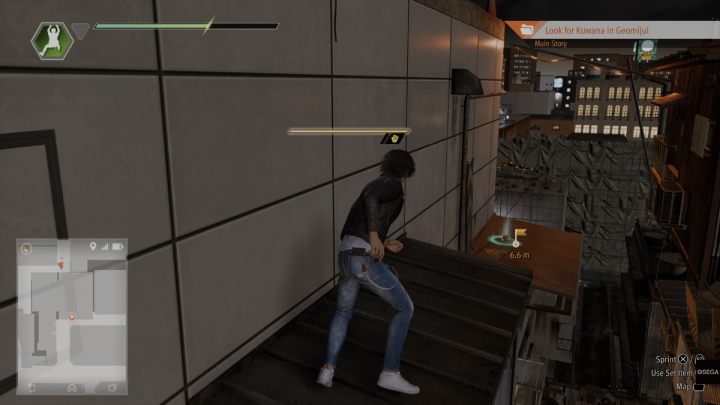 Make a running jump to a small roof. Then jump on the pipe and walk to the right until you reach your companion standing on the roof. 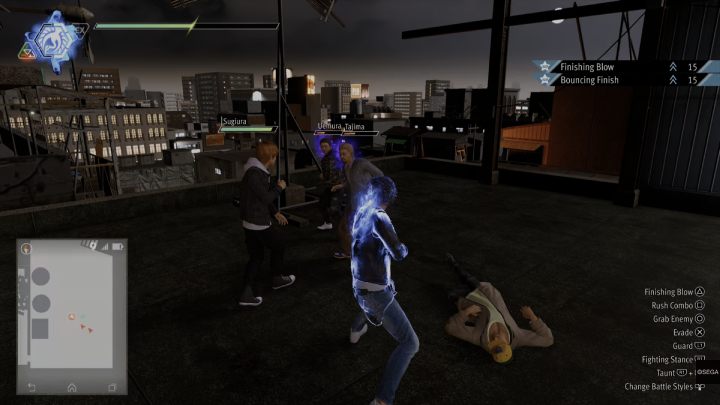 On the rooftop, you will face a battle against RK members. 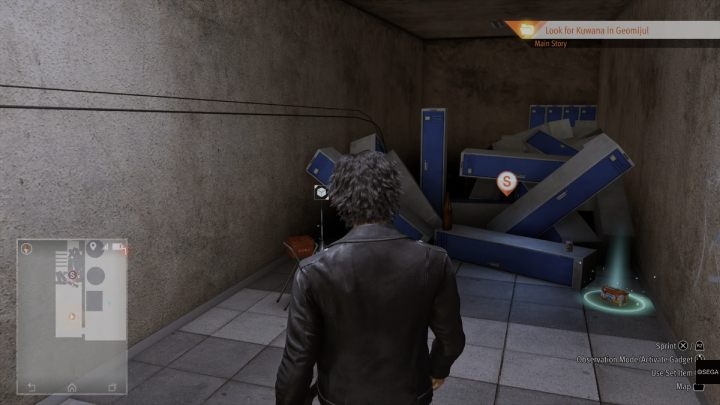 After winning the battle, head to the small room to save the game. Then climb the stairs and use the door. 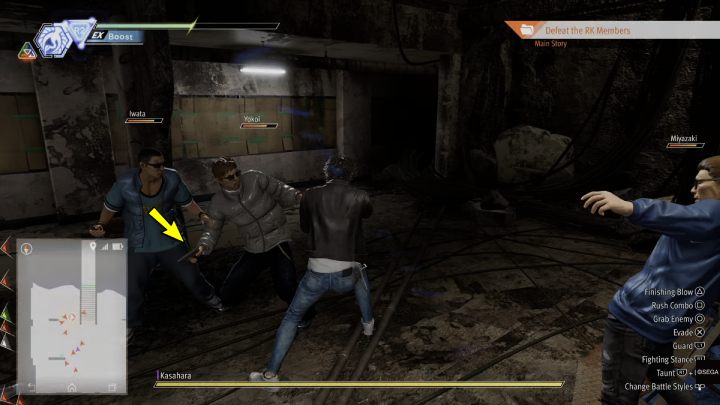 Once you arrive at the site, more RK members will attack you. This time there will be a lot more of them, plus some will have guns. Using the Snake style, take their weapons and dispose of all the enemies. 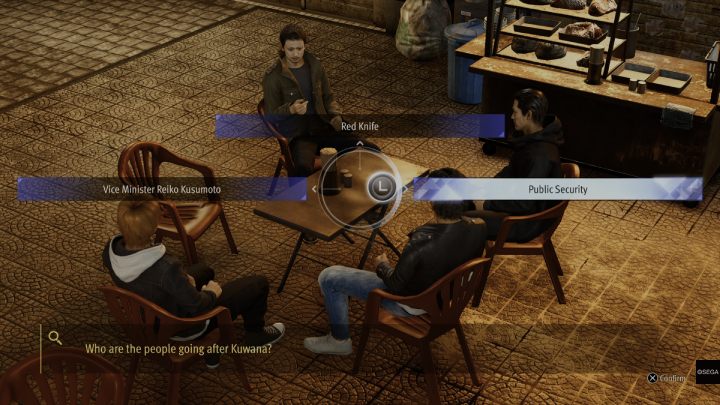 Once you have reached the Liumang hideout, the man at the entrance will ask if you are ready. Select the Sure, let me pass option to proceed inside.

During the conversation, select the Public Security reply, then the They're working with Reiko Kusumoto option. 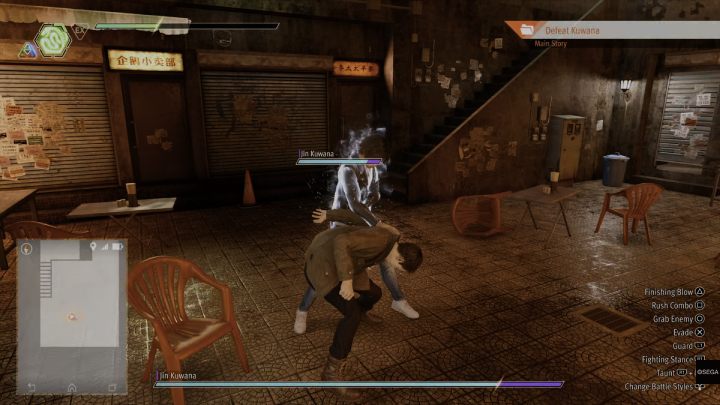 After the cutscene, the fight against Kuwana will start. He's an extremely fast with as much as 4 health bars. Use environmental objects to break through his defenses. Choose the Snake style, as it works best for deflecting enemy attacks. 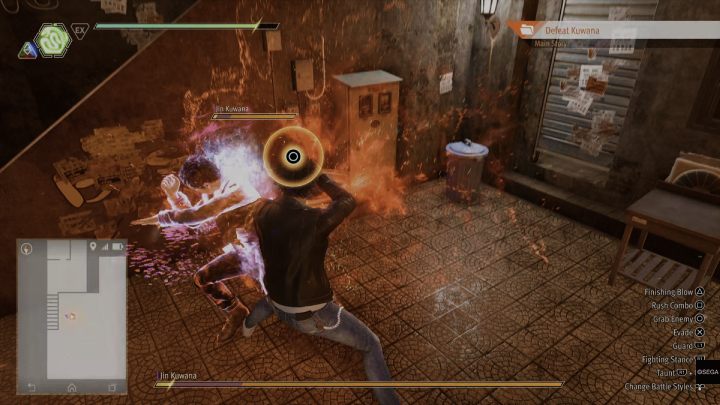 When a red aura appears around Kuwana, it means that he is preparing to launch a powerful attack. Perform the Mortal Reversal action to deflect the attack and deal a lot of damage to your opponent.

After the fight, return to the Yokohama 99 office. 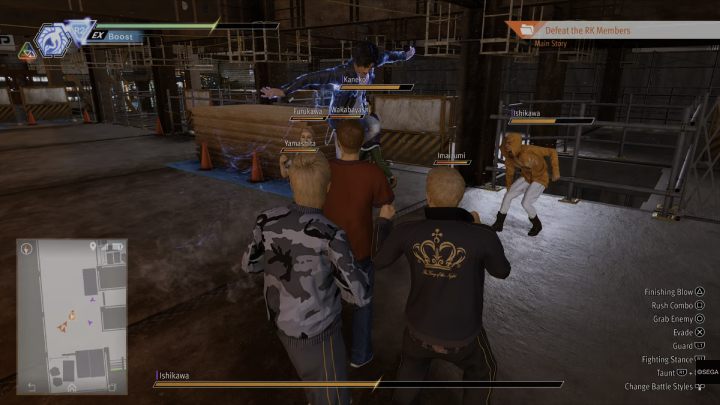 Head to the spot marked on the map, an abandoned building. After the custscene, you will be attacked by RK members. Use the Crane or Tiger style to quickly defeat all of the enemies.