This page of the guide covers the features and skills of the Mage, specifically the Bard Advanced Class.

Specialization: Serenade Meter - increases the allies' attack power and can heal them. 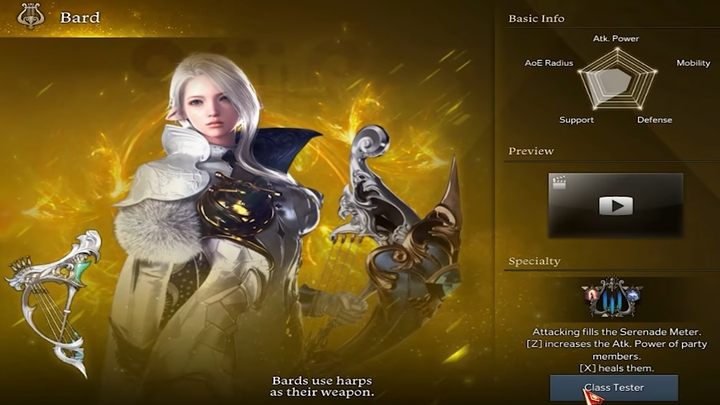 Bard is 100% a support class. They're not really useful in battle, but the buffs and debuffs on enemies can change the course of a battle. Playing as Bard is thus difficult. Additionally, many skills require timing mastery, as they often load for a long time.

The Bard is a support class - in comparison to the Paladin, it has less combat capability, but a much greater ability to support its allies. A difficult class to play alone.

The Bard is the most support-focused class in the game with strong healing skills. The Bard has 2 class engravings but True Courage - the second, optional, offensive class engraving - increases the damage and crit rate bonus of the Serenade of Courage skill by 20% (Level 3) and 10% respectively, only for your character. It cannot be used along with Desperate Salvation.

The Bard may seem difficult to play but is actually not that bad. Her skills focus on buffing herself and others. You shouldn't get used to a single, specific build: the class is flexible and lets you experiment with your skills and engravings depending on the situation. Remember to use your Awakening skill which strongly buffs your allies and heavily damages enemies.