This page of the guide covers the features and skills of the Martial Artist, specifically the Striker Advanced Class. This page lists Striker's skills and engravings using terminology and builds relevant in 2022. You'll learn about the two available builds: Esoteric Flurry and Death Blow.

Specialization: Esoteric Meter - unlocks special skills when charged. The gauge can fill up to three spheres but their exact use when attacking varies depending on your build. 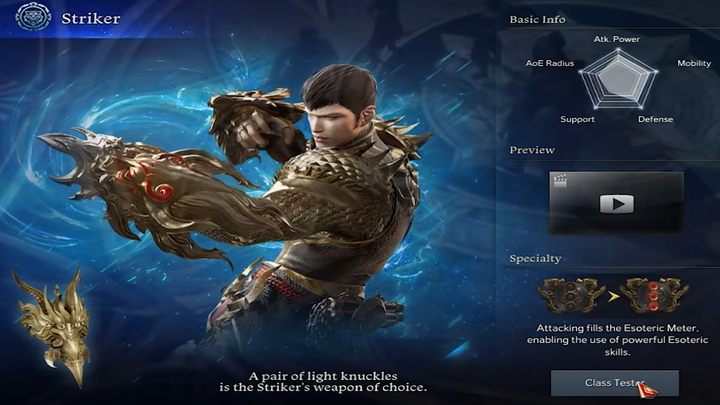 Striker is one of the characters that specialize in melee combat. This character is quite mobile and has a moderately high attack power. He's average at supporting allies and attacking across a large area. His gameplay is mediocrely difficult, but he's effective and vital.

This class is designed for players who value high mobility and attack complexity - playing as Striker means being able to choose attacks and use combos.

Playing as this class requires you to stay focused, choose correct attacks and position yourself correctly. Esoteric Skills are your sole way of dealing more damage, which means you're heavily reliant on the meter. The Striker is similar to the Wardancer while being slightly more strength-focused.

Esoteric Flurry is an engraving improving your use of Esoteric skills. They're elemental attacks, which can come in handy when fighting bosses with vulnerabilities and makes it more likely to inflict status effects when attacking, such as paralysis. This build makes you more versatile at the cost of dealing less damage than the Death Blow build.

Almost all the attacks in this build are Back Attacks, with the remaining skills making it easier for you to land them. You won't reach even half of the Striker's potential if you aren't playing him right. This build lets you nearly forget about the Esoteric Meter and use storng skills constantly. Its key attacks that make use of the spheres and the meter are: Tiger Emerges, Blast Formation, Lightning Tiger Strike. Other skills are used for dodging and filling the meter.

Death Blow focuses on single, powerful attacks rather than the balance Esoteric Flurry strives for. Its playstyle involves filling the Esoteric Meter up to full and dealing a powerful Back Strike with a low crit chance. This build is quite difficult to play.

Your skill set remains nearly identical to the Esoteric Flurry build, but their use in battle differs. You must focus on filling the Esoteric Meter as quickly as possible in order to use Esoteric Skills and the Awakening Skill. Blue skills are the key to doing so.