Every vocation in LOTRO is a set of three skills that you can master. You are to choose one vocation out of six. The set of skills that you get in each vocation determines which materials you will be able to gather yourself and which will have to be bought from other players or NPC. For example: as an Armsman you can gather ore on your own, because you have the Prospector skill. On the other hand, you won't be able to gather wood, as this requires the Forester skill. Thus, whenever you'll want to use a Woodworker recipe, you'll have to trade for materials. In the next part of the guide I'll tell you about production process for each skill. First let's deal with the basics, though.

When you finish your second instance in the game and are free to wander around Middle-Earth, you'll get a crafting-based quest from one of the NPC near your starting location. That is: Alf Goodcliff in Little Delving if you're a hobbit; Bogi Deepdelver near Thorin's Hall gates if you're a dwarf; Mibrethil in the southern part of Celondim if you're an elf; Edward Carver near Archet if you're a human. Details apart, this quest is to find a Master of Apprentices and learn a vocation. You can find such character at every bigger market place, for example in Michel Delving, Combe, Thorin's Hall, Celondim. When you talk to him/her, you'll have to make a choice on which vocation you want to learn. Should you decide, you'll also get the basic tools you need for all three skills you gain. If you want to, you can immediately switch to better ones by buying them from one of the local suppliers. 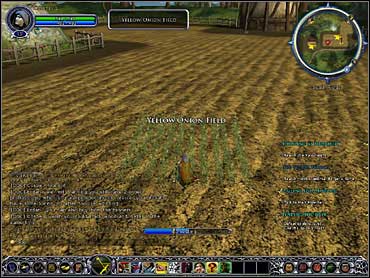 Farming pipeweed is not the most heroic deed you can perform in Middle-Earth.

Generally speaking, to create a new item you need a recipe (you get all the basic ones as soon as you choose your vocation), its ingredients, a tool, and a specified type of workplace (oven, workbench, forge). Every time you use any of your crafting skill, you get experience in it. Gather enough of it and you'll advance in rank and be able to execute better recipes.

HINT: In order to execute a particular recipe, you must have the appropriate tool currently equipped. Remember about it, because sometimes it's easy to forget to switch from a mining pick to a smithing hammer.

HINT: When you have a skill that's based on gathering resources (such as foresting or mining), you also get a passive ability that you can use to mark their location on the mini-map. This won't get the job done for you, but is still a great help.

HINT: All the workplaces are marked on a mini-map with a golden anvil.