After taking control of the hero, you get a new task called "Go back to the camp". Follow the path. At the entrance to the camp you find Finn sitting on a fallen branch. 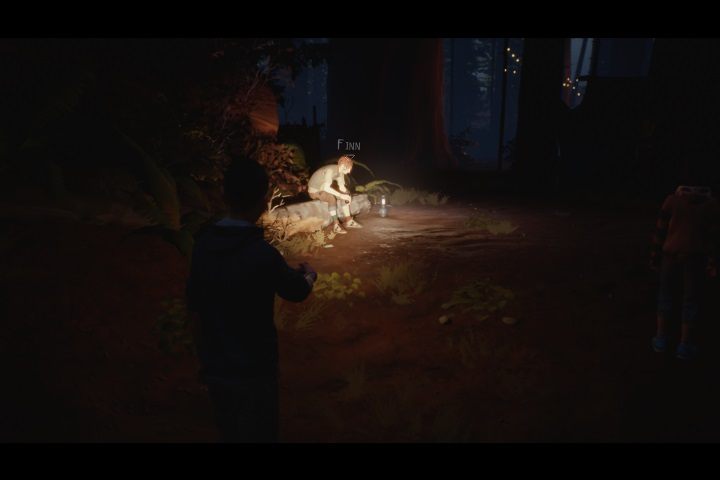 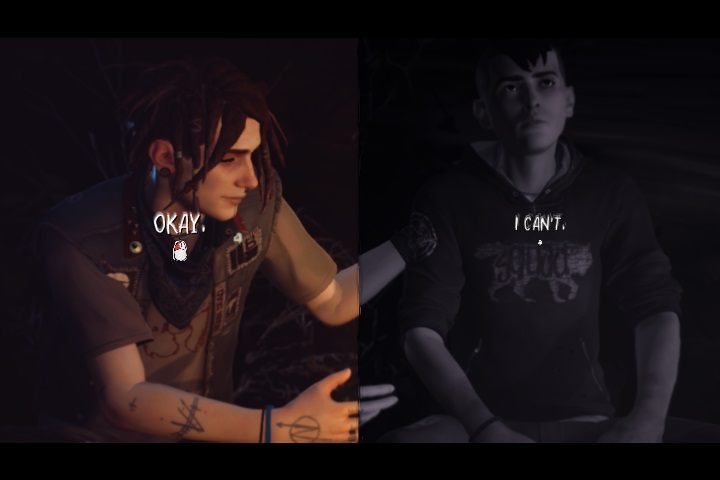 After selecting the second option, you will be able to spend some more time with Cassidy later. If you choose the first option and select the dialogue "I feel the same", you will create a strong bond between Sean and Finn. Go to Cassidy and get a tattoo. 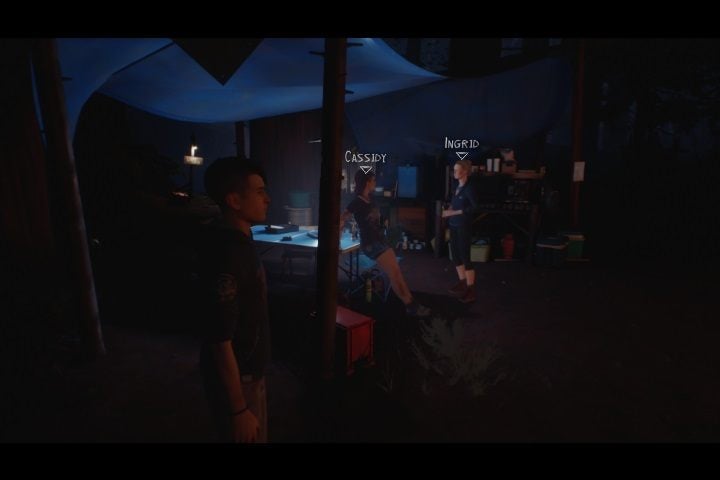 Then you can go swimming with her in the lake. If you promised to help Finn and tell the girl about it, she'll be pissed off and just walk away. You can also lie to her, unless you told Finn you wouldn't help him, then you don't have to lie. On the way back, Finn and Daniel are bothering you that they're ready to go. Cassidy will be offended and leave. If you don't help Finn, you still have a few nice moments with the girl... If you go with Finn, you get to the entrance gate. You have to ask Daniel to open the door. 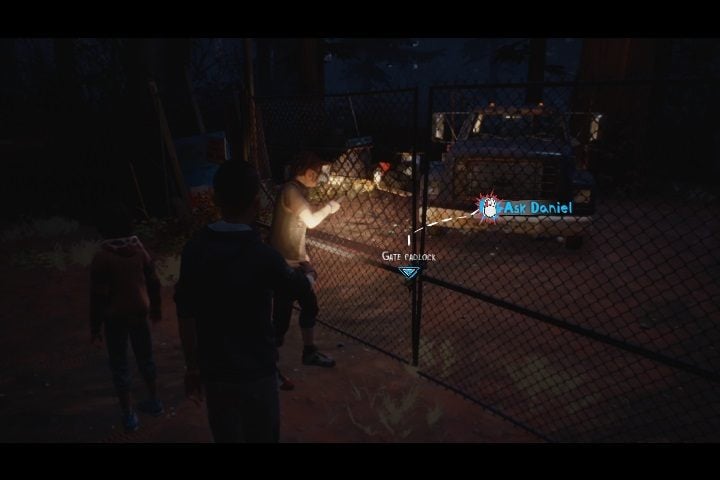 Now check the car doors. They're all closed. Ask Daniel to open some, but first disable the others. 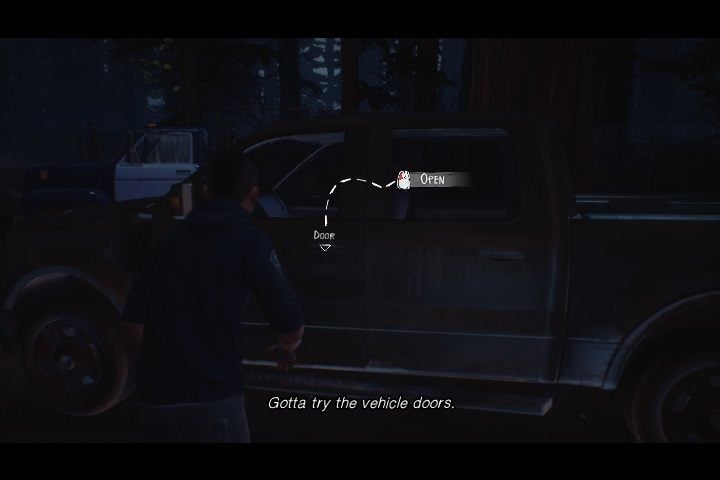 There is a "Toolbox" under the roof with a screwdriver. Open a "Metal box" with it. 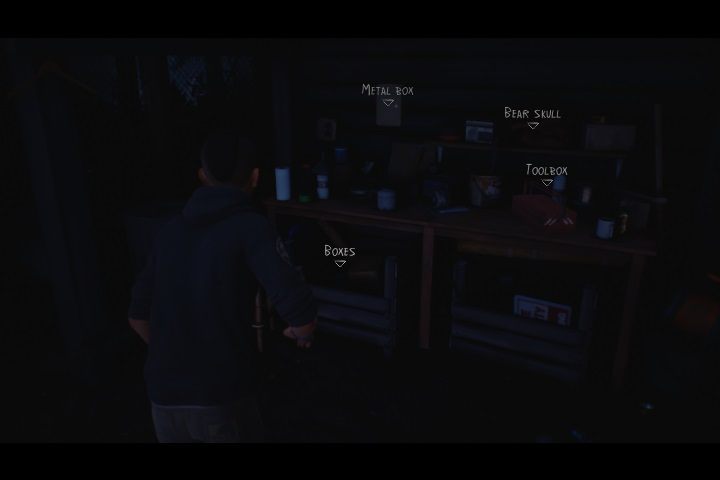 There's a "Key" inside. It doesn't match any car, though. 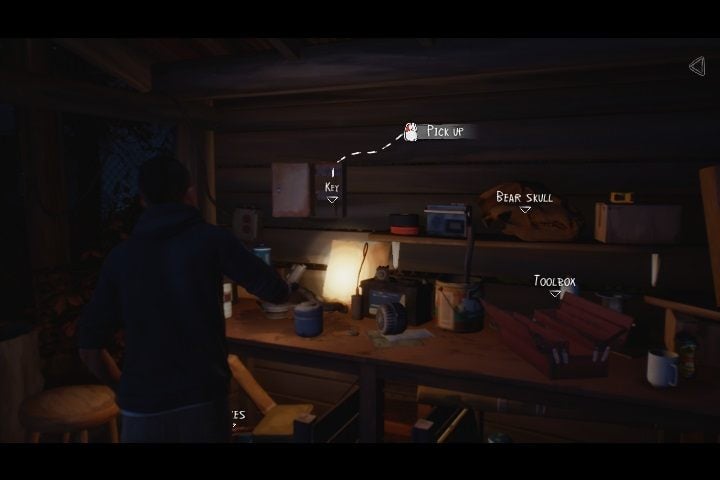 In the middle car puncture the tires with a screwdriver, in the car closest to the canopy you break the engine - open the hood by force and choose "Break engine". So, there is one car left. Get on the trailer and ask Daniel to open the rear window. This is done silently. Do not try to open it forcefully, because it ends up breaking the screwdriver. Ask Daniel for opening the car door. Get inside and drive away. 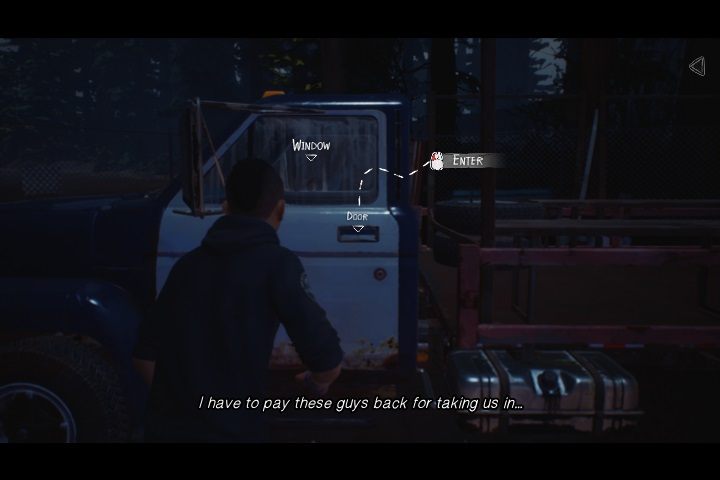 Enter the greenhouse, destroy the camera on the pole with the aid of Daniel. 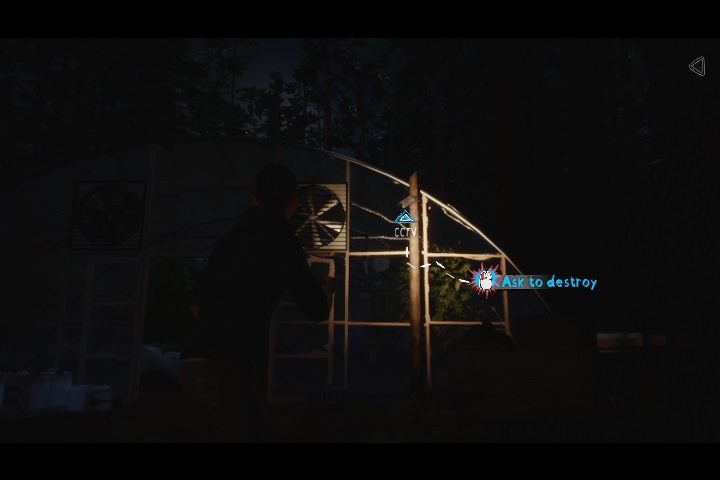 When you exit the greenhouse destroy the camera in front of the house. 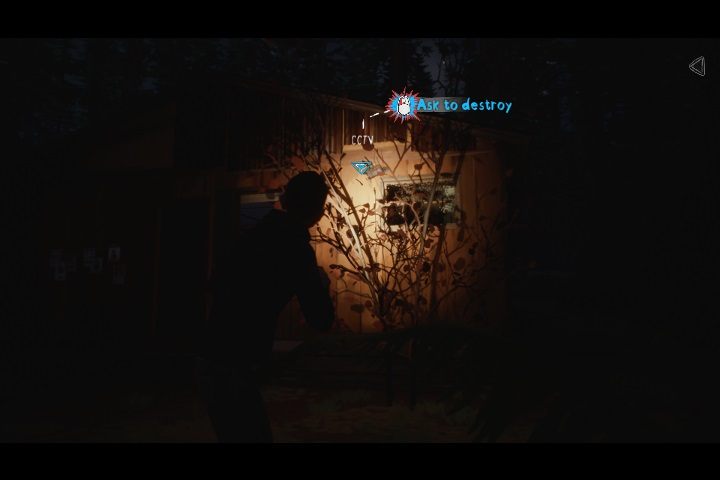 Go to the window by the door, and you will see another camera. 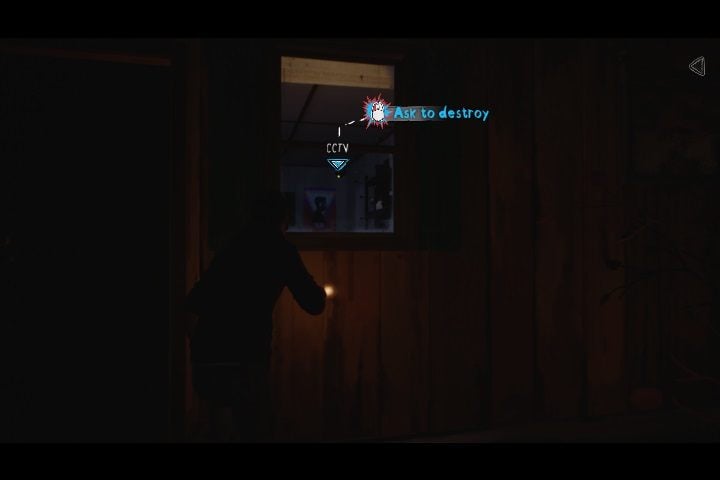 Move to the left side of the house and destroy two cameras. 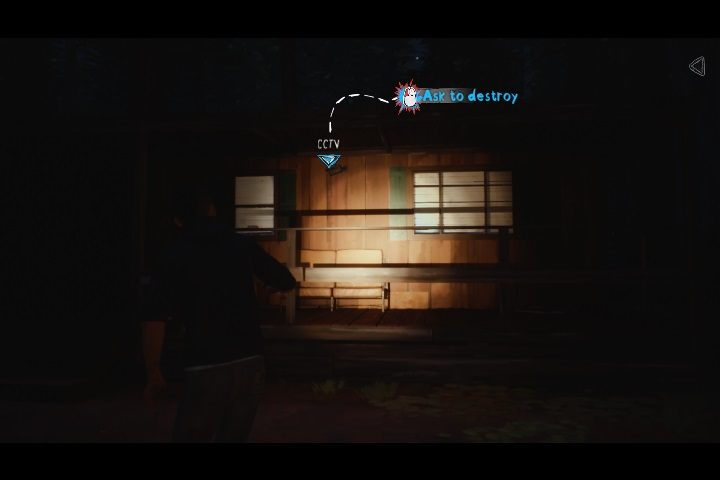 At the window use "Inspect" and ask Daniel to lift the internal lock of the door. 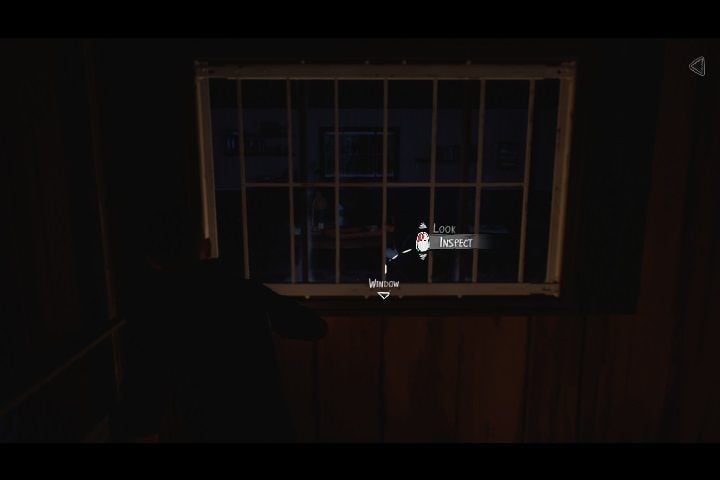 Go back to the door and walk to the right. Move to the end and on the corner there is a last camera facing the back of the house. 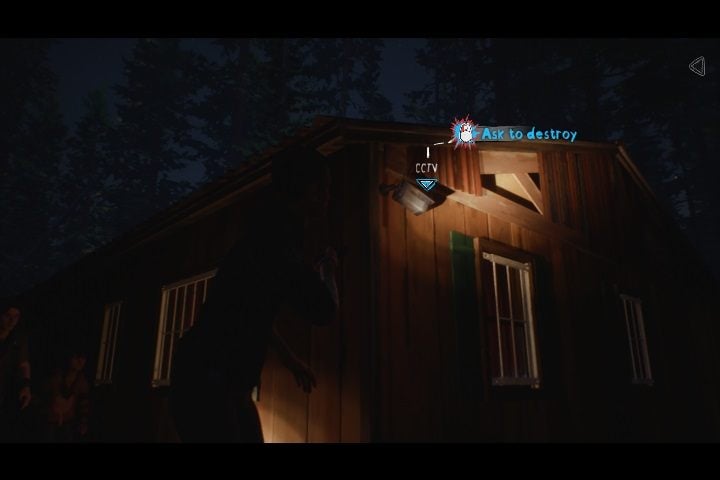 Now move inside and go to the opposite door. A first cutscene launches. You have another choice to make: "Take the gun" or "Don't take the gun". If you have taken the weapon, next time you make a choice an additional option "Use gun" will appear. Also, you may choose: "Discuss" or "Obey". 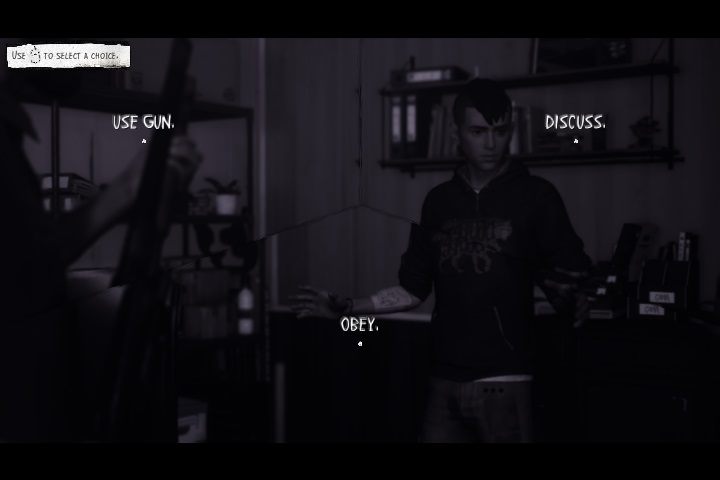 Meryl and Finn die by the weapon. By selecting "Obey" or "Discuss" you will have another choice to make: "Use gun", "Daniel's Power" and "Do nothing". The use of weapons will end as before. The "Do nothing" option leads to Finn's death. Choosing "Daniel's Power" ends up hurting Daniel. Additionally, Sean loses his eye, and Finn survives. 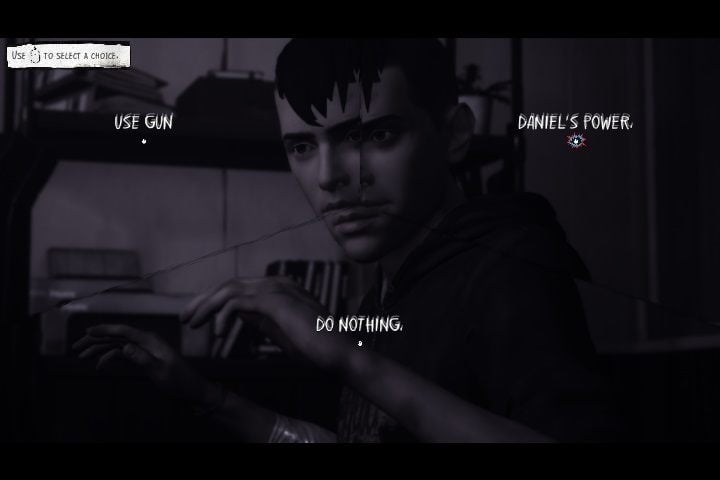 The episode ends with a cut-scene, and "To be continued" titles are shown on the screen.