True Jedi Story - 30 000. Most importantly, try not to get killed too often. Take your time and don't be disturbed with the fact that the Emperor is waiting for you to come and fight. Look around.

True Jedi Freeplay - 40 000. It's a lot easier than the Story Mode, mostly due to some cool stud-rich bonus areas.

Power Brick. Use the Force on 8 squares on the back wall near where you fought the Emperor for the first time. 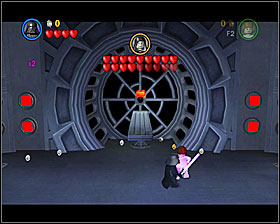