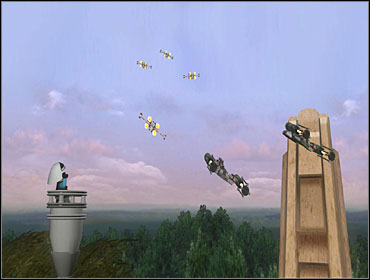 You'll be piloting an X-Wing on this one. Notice the two distinctive elements of the background: violet energy balls - torpedoes - fly above these to be able to shoot them; also violet shield generators - use the former to destroy these. It might sound complicated but in fact is quite simple and you'll get it as soon as you're out there.

Get a torpedo to blast the generator, then go up the screen. Do the same with the four generators to the right of the next shield (notice the red veins that point you to the generators you have to disable). Blast through the gate and go up to the next section.

Fly along the right valley, destroying the 4 generators in there. You'll find another four a little bit ahead. Blast through another gate and continue to the North. Another section, another 8 generators to destroy, another gate to smash. You'll see a short cut-scene after you're done with that, after which you'll be in the legendary tunnel.

Go forth, destroying the turrets (for studs) and avoiding TIE Fighters' fire. When you reach the end, destroy the 12 turrets guarding the vent (they appear when you fly above them) and use the torpedo on the vent itself. If you don't have one, you'll have to go back to the very beginning of the tunnel. A good hit will end this episode.