Head right. Destroy a pile of brown bricks to form a passage. Use the ramp and go through the valley until you reach a sand "slide", from which Tuskens will drop and attack you. Switch to Ben and use the Force on the escape pod nearby to be able to go further.

When you're in the next section, eliminate three Tusken Riders and use the loose bricks on the ground. Move the crate so you can use it to jump up to the platform. You'll reach the Sandcrawler, a giant desert vehicle. Destroy everything around to get some studs and then use the bricks to build a grapple point near the back of the vehicle. Switch to Luke and use it, then switch to Ben and use Force on the sandcrawler's side so the young Skywalker can grapple up. Use the lever and do the same thing with the upper platform. You'll eventually reach the top of the vehicle.

Let both characters use the levers and you'll see the entrance opening up down at the ground level. Jump down and stand below the pipe to get in. Now you're inside the Sandcrawler. Go forth until you reach a corridor with 5 valves on each side. Destroy the ladder that protect them and use the Force on each of the valves.

In the next room use the lever and you'll see a crate coming out of the conveyor belt. Place it in front of the door that obviously leads to R2. You can take time to place crates to open other door and get some goodies - you can always get a new one by using the lever once more.

When you're near the large area with swamps in it, switch to 3PO to activate the panel to the right. You'll dry the first swamp. Use the brown bricks to form a footbridge and use it to reach the second panel as 3PO. Now you're free to go further. Defeat the Tuskens and switch to Ben to jump to the upper level. Now use the Force on white bricks ahead to form a bridge. Jump up and push the crate down. Use its remains to build another bridge. Use it as 3PO and use yet another panel. Go forth until you find a Sandspeeder.

Use the bricks to build an engine for the Sandspeeder and jump in it to ride to the right. Repair the lever in there and use it to form a bridge for the rest of the party. Now stand on four buttons in front of Ben's shack and you're done. 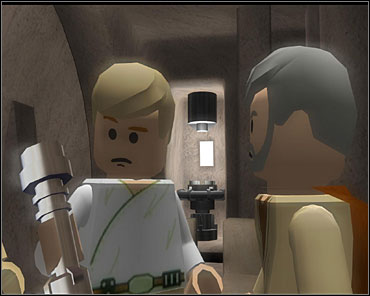