Behold, a complete source of everything you'll ever want to know about LEGO Star Wars II. The game is quite simple when you just want to go through all the episodes and see all the cut-scenes, but things can get really tricky when it comes to secrets. We'll start with guiding you through the Story Mode, just to get rid of any problems you might have with the game's puzzles. For practical reasons, hints concerning True Jedi status in Story mode have been moved to the Freeplay section of the guide. At the end you'll find hints for all the bonus levels and minigames you'll unlock.

A few hints just to get you started:

- Try to control a Jedi-type character most of the time, as therefore you'll be able to catch more stud-collecting opportunities.

- Don't bother looking for Minikits in the Story Mode. You won't be able to get 90% of them before Freeplay anyway. Before you start Minikit-hunting in freeplay, though, make sure you have a Bounty Hunter and a Dark Jedi among your characters. 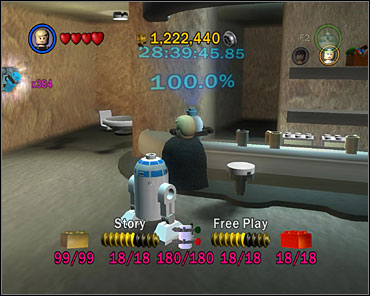 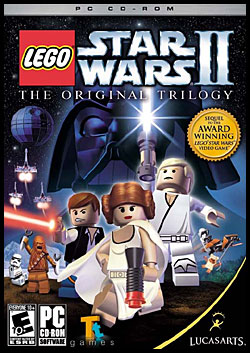 LEGO Star Wars II: The Original Trilogy takes the fun and endless customization of LEGO and combines it with the epic story, characters and action from the original Star Wars movies that revolutionized pop culture forever (Episode IV A New Hope, Episode V The Empire Strikes Back and Episode VI Return of the Jedi). With a unique tongue-in-cheek take on the Original Trilogy, LEGO Star Wars II follows the Rebel Alliance's crusade to dismantle the Galactic Empire and rebuild a galaxy in pieces. Build and battle your way through your favorite film moments, from Darth Vader's pursuit of Princess Leia aboard her Blockade Runner to a showdown on the second Death Star, as the game includes even more of the family-friendly LEGO action, puzzles and humor that earned the original LEGO Star Wars such popularity and acclaim.
And much more new to offer, it still has. For the first time ever, characters can get in and out of vehicles, as well as ride creatures. You can also mix and match the body parts of more than 50 playable characters to create one of millions of possible LEGO Star Wars heroes. And on console and Windows platforms, a game save from the first LEGO Star Wars can unlock another 50-plus additional characters for Free Play - that's more than 100 total characters! Other exciting additions include free-roaming vehicle levels that are no longer on rails, the ability to switch ships at will in Free Play, cool new character-specific attacks and maneuvers, playable mini-kit vehicles, an optional adaptive difficulty mode and more.
- Expands upon all of the fun and creativity that made the original LEGO Star Wars such a hit, this time set during the original three Star Wars films (Episodes IV, V, VI).
- For the first time ever, build and ride vehicles (landspeeders, AT-STs, speeder bikes and more) and mount creatures (from the banthas of desert Tatooine to the tauntauns of frigid Hoth) through on-foot levels.
- Now, all non-droid characters - not just those with the Force - have the power to build.
- Unlock more than 50 playable characters, from cultural icons like Luke, Leia and Darth Vader to fan favorites such as Greedo, Jawas and Gamorrean guards.
- Unlock up to 54 more playable characters with a game save from the original LEGO Star Wars (consoles/Windows).
- Create unique playable characters like Yoda Kenobi, Lando Fortuna and millions more by mixing and matching the LEGO body parts of all playable characters.
- In Free Play mode, experience the Original Trilogy in a new way by importing any character into land levels, or switch between vehicles at will in space levels. Make Darth Maul a hero of the Rebellion, or destroy the Death Star with a TIE fighter!
- Character-specific attacks include Chewbacca pulling enemies' arms out of their sockets, Vader's Force choke, Leia's 'slap' melee attack and many more.
- Tongue-in-cheek humor presents the Original Trilogy in a manner only LEGO can put together, with comical reinterpretations of classic Star Wars scenes and elements.
- Solve a greater variety of puzzles that encourage creative thinking through the use of teamwork and unique building situations only possible in a LEGO galaxy far, far away.
- The adaptive difficulty option creates more challenging gameplay for Jedi Master gamers - the better you do, the tougher it gets.
- Cooperative gameplay encourages teamwork in a fun way and features a revamped camera for an optimal gameplay experience.
- The PSP version features wireless play for two-player co-operative and competitive gaming, with exclusive content unavailable anywhere else.
- Play through completely different LEGO Star Wars II gaming experiences on Nintendo DS and Game Boy Advance.