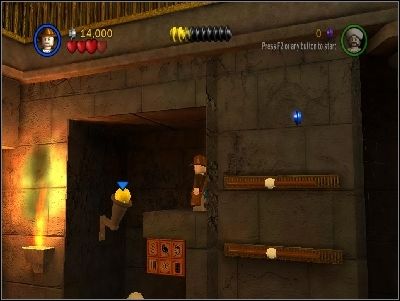 Go to the right and use the book on the hieroglyphs (if you don't have the book you can dig it up). You will notice brown bars to appear. Use them to get up, and use your whip to take the last golden ball. Put the golden ball in the last hole. The golden Ark will appear. Get close to it. 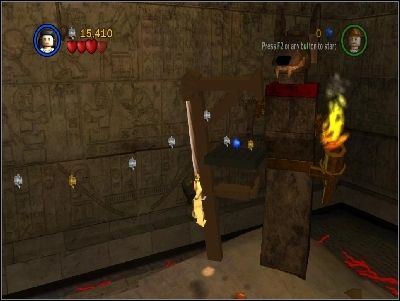 As Marion, hang on the two ropes - the columns will fall down. As Indy, go left and stand on the brown pad. Change your character to Marion and hang on the rope near Indy. As Indy use your whip to destroy next column and make a path above snakes. 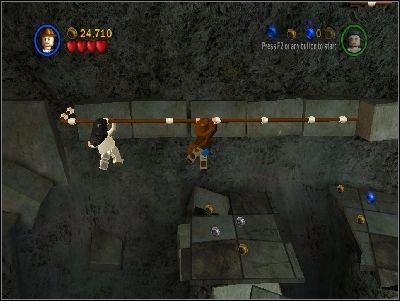 Go to the right using brown bars and jump above the gap using rope. Go right and use your whip. Destroy the web and the skeleton, take the shovel and dig up the lever mechanism. Use it and Marion will join you. Jump with her on the rope and the door will open. 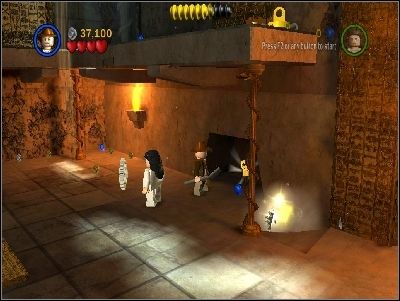 In the next room, make a block from the LEGO pieces in the middle of the room. Go right, destroy the jugs near the wall and take the key. Use it on the mechanism but it wont work. You need two gear-wheels - first is on the floor, and second one is buried. If you don't have a shovel, go back to previous location and you will find it. When you will finally use the mechanism, you will rise up a part of the wall. 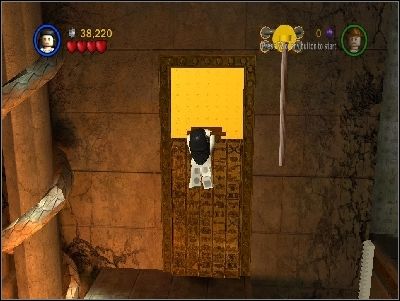 As Marion, jump up. Hang on the rope to close the Hatch. Go to the right and close next hatch (and kill snakes). To close the last hatch, you need to make a rope from the LEGO pieces at the end of the platform. As Indy, push the block in the middle of the room towards the platform to help you climb up. Step on the buttons near the gate. The gate will open - go through it. In the next location just go strait ahead. 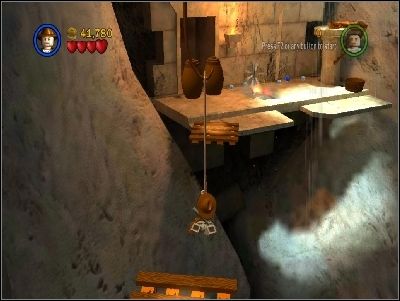 Use your whip on the highlighted place. Take a shovel and dig up LEGO pieces - make the brown bars from them. Jump up, use your whip and go to the right. Take the key, jump down and use the key on the mechanism. 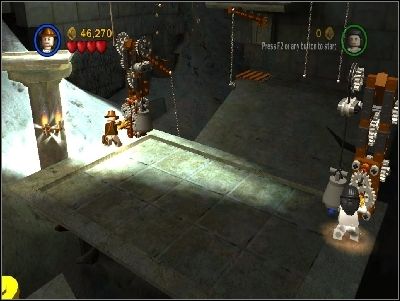 As Marion, jump on the rope, and on the platform. Take the key, jump down to Indy and use the key on the second mechanism. Turn both keys at the same time. 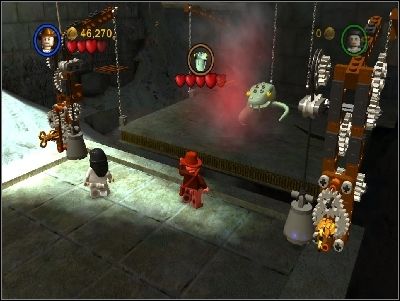 A big snake will appear. To kill it, you need to take the torches from the left side of your platform and throw them at the snake. After you kill this boss, make an elevator from LEGO pieces and push the white block.