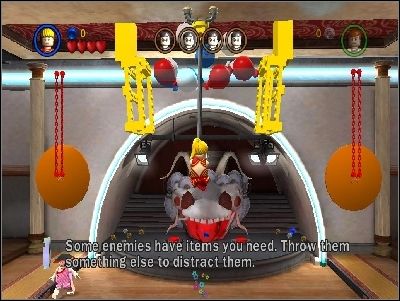 After starting the game, Indy will be poisoned. You need to get the antidote. As Willie, jump and hang on the rope in the middle of the room. The hatch on the roof will open and few balloons will fall down. Destroy them and you will find a diamond. Take it, go to the left and throw it to one of the guards (you will notice an arrow pointing the right one). 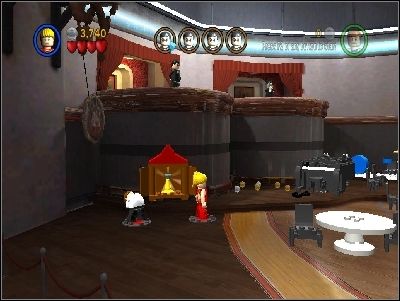 On the left side you will see two buttons. Stand on them and you will find the second diamond. Take it, go to the right and throw it to the next "man in black". 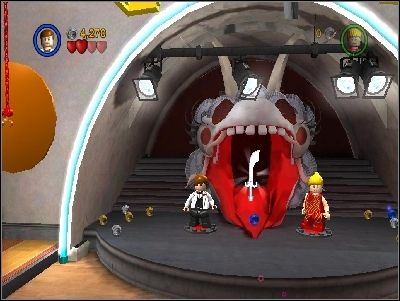 The third diamond is on the table in the middle of the room. Take it and throw it to the guard on the left side of the room. The last diamond is on the right side behind the glass. Use Willie's scream to brake the glass (hold J key). Take the diamond and throw it to the last guard. The antidote is yours. Stand on the red button near the dragon head. Take the sword and throw it at the rope attached to the orange shield. Get on the shield (as you would enter a vehicle) and ride with it into the door on the right side of the room (behind the shooting enemy). 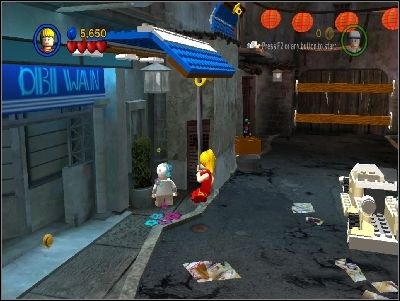 Now you will be able to take control of one of three character: Indy, Willie and the child. As Indy, go down and left. Using the rope go up and to the right. You will reach blue foot-bridges. As Willie catch the rope, what will make the foot-bridge to fall down. As Indy cross two foot-bridges this way. At the end of the platform take LEGO pieces, jump down and put them on the green pad. 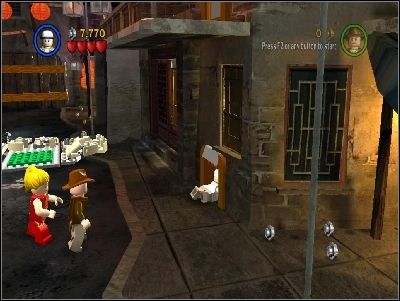 You need to find one more part. Change your character to the child and destroy all pieces blocking little hatch on the right side of the road. Use the hatch, go to the right using the brown bars. Jump on the rope and then on the trampoline. Jump to the right and you will find next car piece. Take it, jump down and put it on the green pad and build an engine from the LEGO pieces. 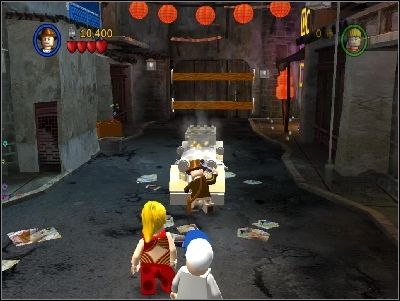 You will notice, that the gate to the garage is opening. Defeat your enemies, go to the garage, take the wrench and repair the car. Use the car to destroy a wooden gate. 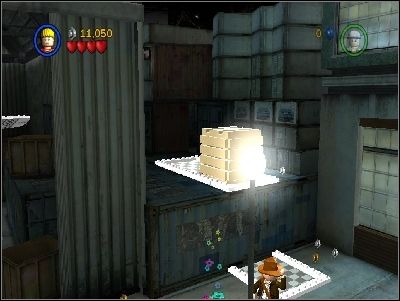 You will be in a hangar with plane. Defeat your enemies. As Willie jump on the platform on the right side of the hangar and drop down the white box. Build a hatch from the LEGO pieces. As the child use the hatch and destroy all white boxes. Take the LEGO pieces, jump down and put them on the green pad near the plane. 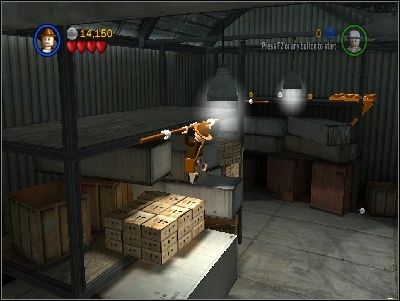 You need to find one more plane piece. As Indy go to the left and jump on the metal platforms using brown bars. Jump on the other side and use the whip on the highlighted place. Take the LEGO pieces and put them near the plane. 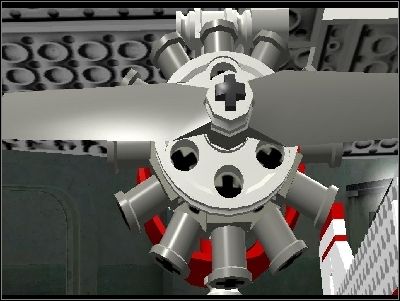