The following page of the guide to LEGO Star Wars: The Skywalker Saga describes a walkthrough of the side mission Ma Klounkee Most Foul. We explain how to talk to all 6 witnesses of the shooting in the canteen. Thanks to our tips, you will learn how to talk to the resident at home and how to get to the roof.

Ask each of the witnesses about what happened to Greedo 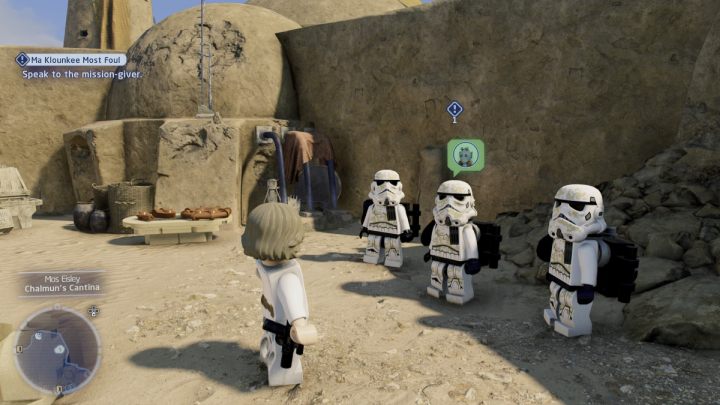 Accept the task from the Stormtrooper standing at the Mos Eisley Canteen. Your task will be to gather information from 6 witnesses of the Han Solo vs. Greedo duel. 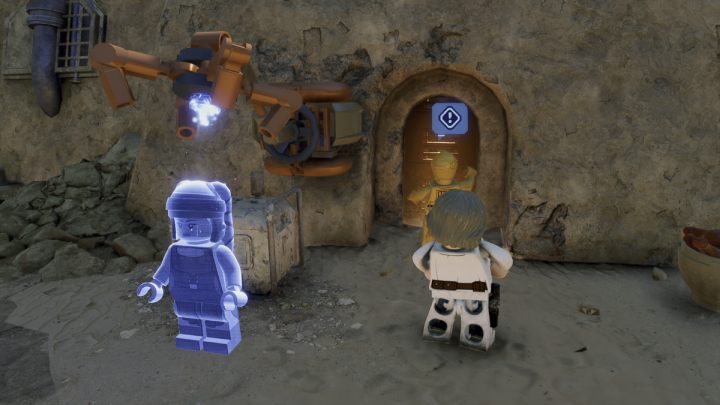 The first witness will be in the house near the stormtrooper who tasked you with the investigation. Talk to the resident as the protocol droid. The witness will tell you that he will not talk to anyone other than the figure in the hologram. 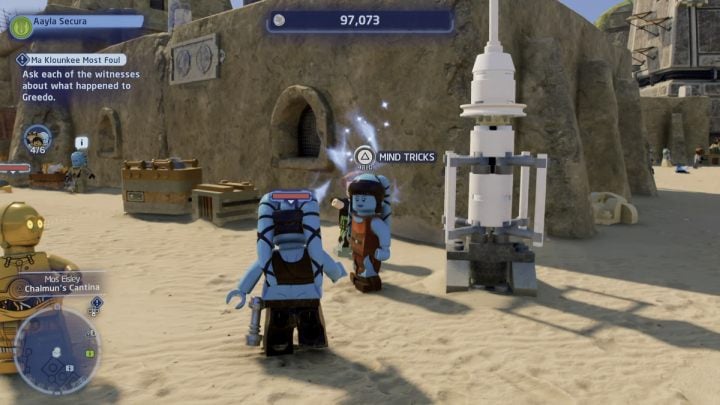 While controlling any Jedi character, approach the character from the hologram, who will be standing near the house, by the white rocket. Use the Force to take control of it, go to the witness's house and talk to him. Then switch to a protocol droid and enter the witness's house. Talk to him and ask about the shooting in the canteen. 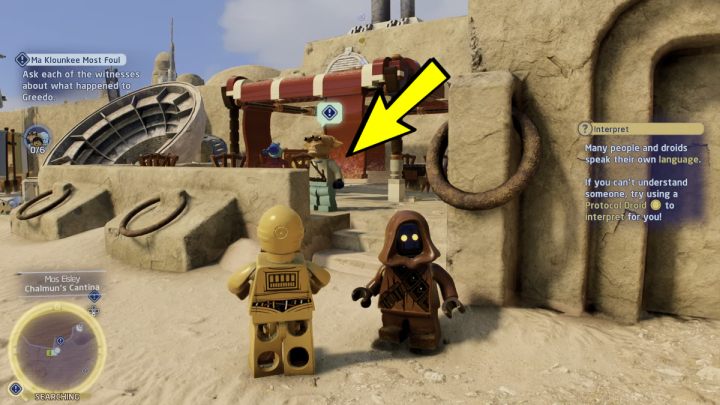 The next witness will be standing by the trampoline. Talk to him as the protocol droid to understand his language. 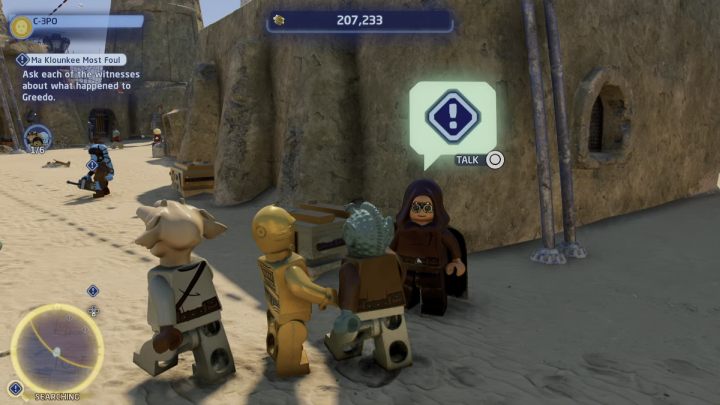 Another witness will be standing on the border of the search area. When you talk to the character in the hood, he will start to run away. Switch character to any hero with a ranged weapon and run after him. After a few well-aimed shots, the witness should fall over, then approach him and talk to him again. 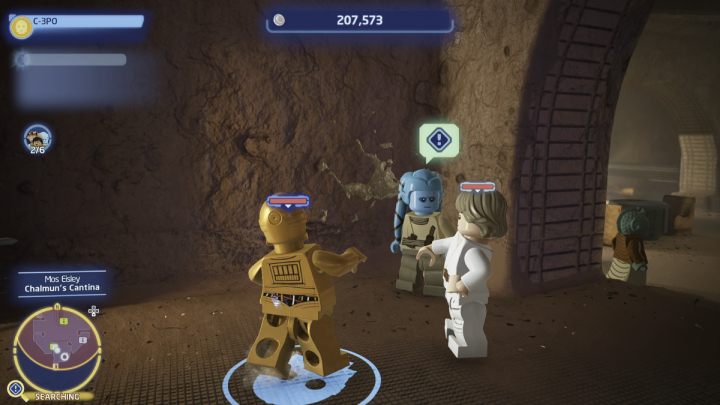 Go to the canteen as the protocol droid and talk to the character standing by the door. Pay 10,500 studs for information about the shooting. 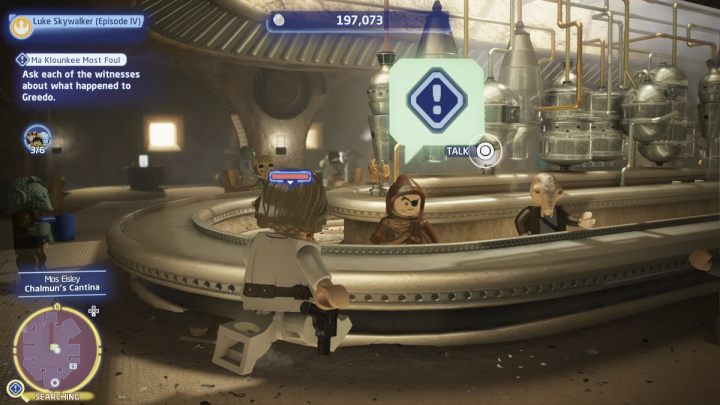 The next witness is a canteen worker. Remember that droids cannot enter the canteen room, so choose another character and talk to the witness. 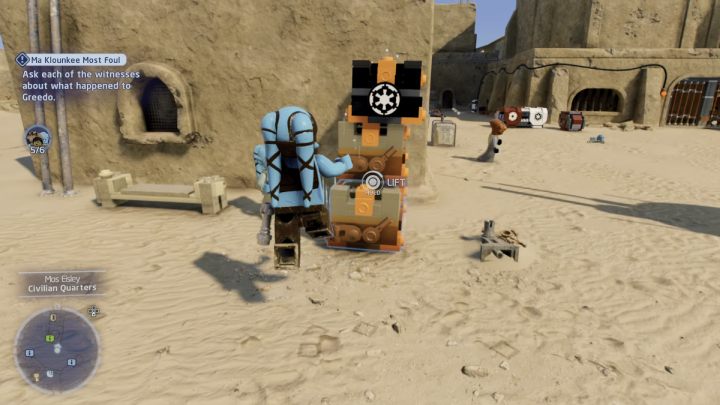 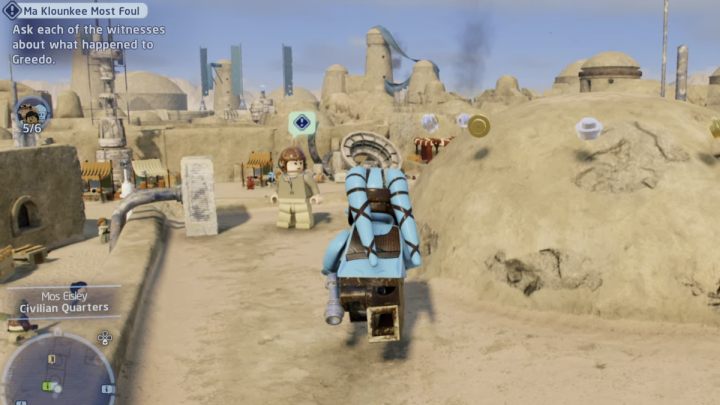 The last witness is on the roof of the building. As a Jedi, place a few crates against the wall of the house to make it easier for you to climb to the roof. Talk to the woman on the roof and ask about the shooting in the canteen.