This page of the guide to LEGO Skywalker Saga contains a walkthrough of the third, final battle against Kylo Ren. You'll face him in Episode 9, Rise of Skywalker, during The Strength To Do It story mission. Our walkthrough explains how to weaken Kylo Ren, avoid his attacks and solve all the puzzles between the phases of the duel.

Where the final duel takes place 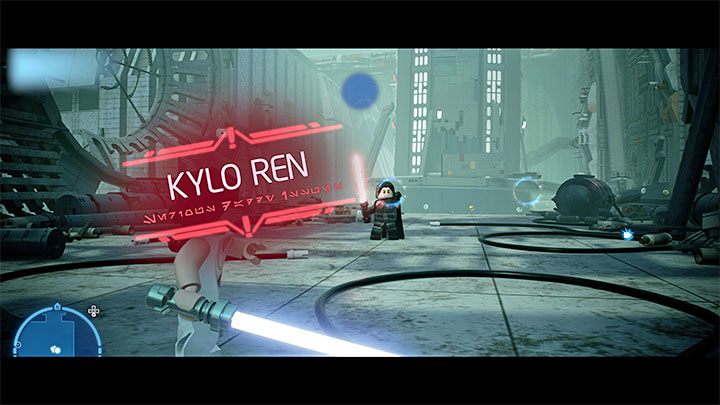 You've already faced Kylo Ren before in Episodes 7 and 8. You'll encounter him for the final time during Episode 9. The duel takes place right after starting The Strength to Do it level, during the exploration of Death Star II's wreckage.

The first phase of the duel 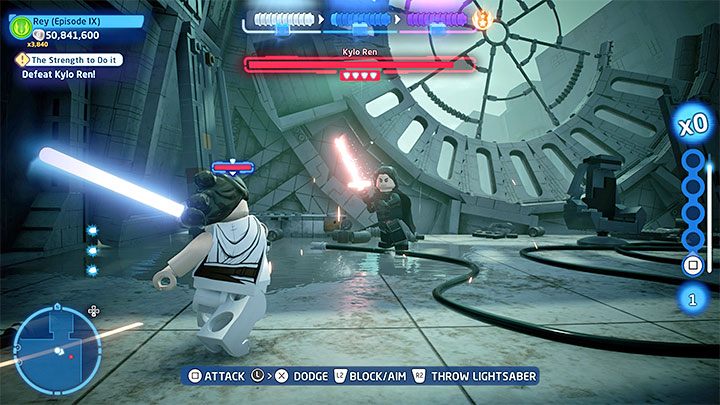 The boss fight has three phases. They're all separated by puzzles, the solutions of which are included in the walkthrough below.

The strategy you should take during the fight should be obvious by now. You can damage the boss by throwing your lightsaber or agressively fighting him in melee. 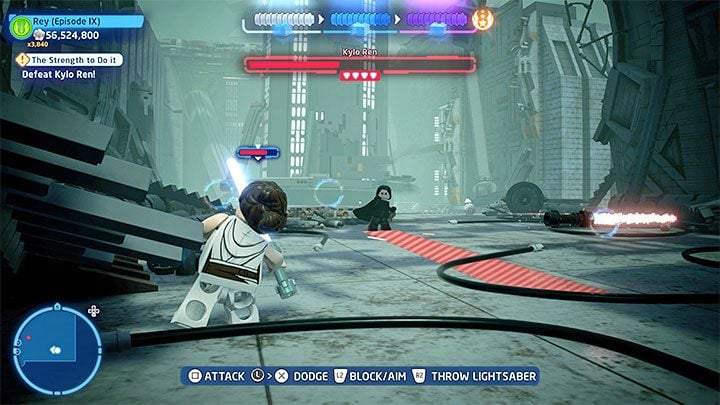 Make sure to dodge his attacks. As a reminder, all strong attacks are telegraphed with red lines or circles. Kylo Ren can grasp you with the Force, forcing you to mash the directional buttons to break free.

At the end of phase one you must overpower Kylo by mashing the displayed button. 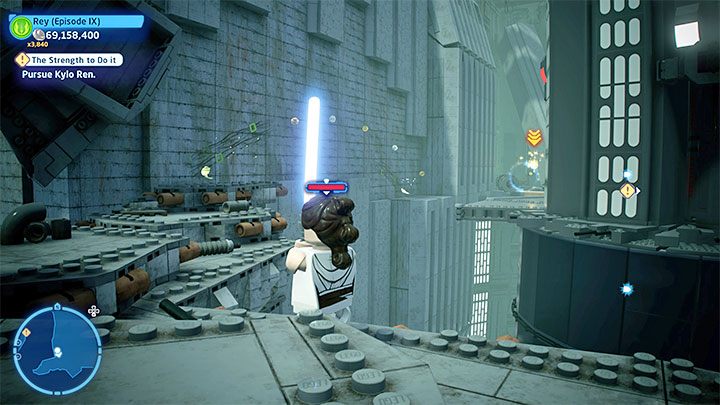 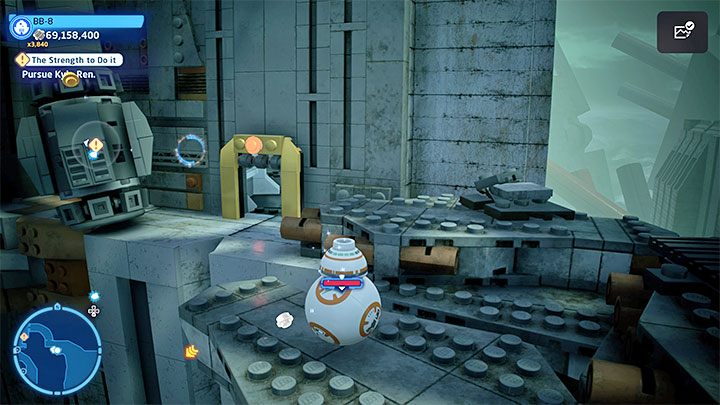 Kylo Ren will run away. You have to solve some environmental puzzles on the way to him. You can reach the next area by controlling any of the heroes: 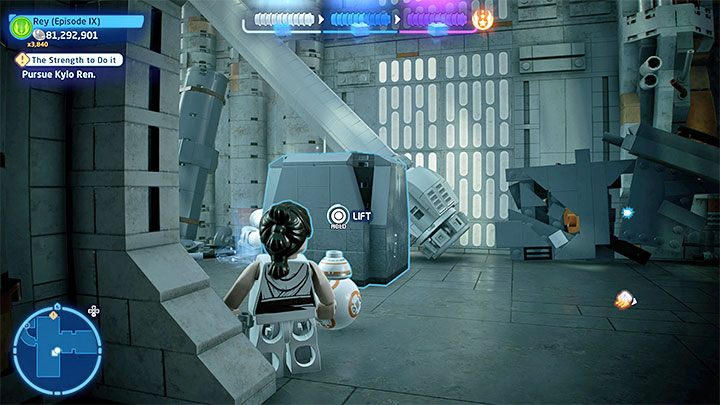 You'll reach a pit which blocks the way forward. First, select Rey. Look at the stone block pictured above - you must move it with the Force and push it into the pit. 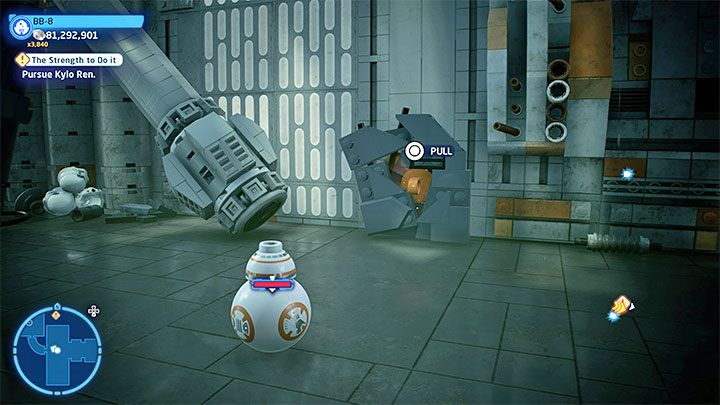 Now switch to BB-8. There's an interactive hook nearby (pictured above). You can pull it with a grapple hook and unlock a small tunnel the droid can fo through to reach a side room with two buttons inside. 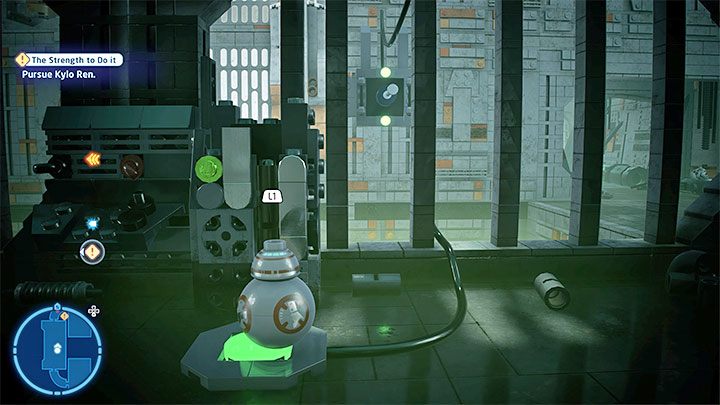 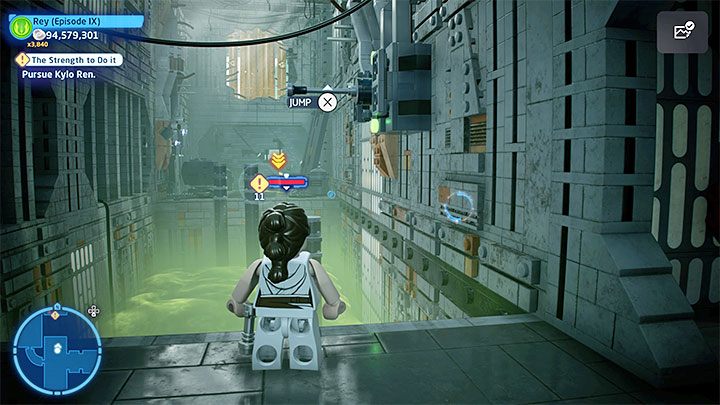 BB-8 must help Rey get to the other side of the pit. Here's what you need to do: 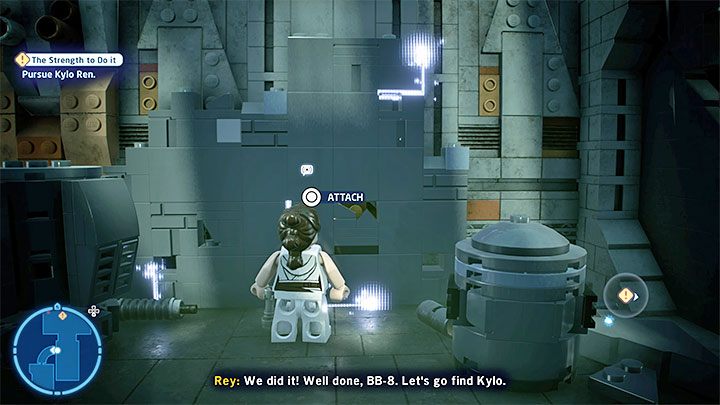 Stick with Rey and cut open the pictured wall with your lightsaber. This will unlock a small hole. After switching to BB-8 you'll be able to go through the tunnels and reach Rey. 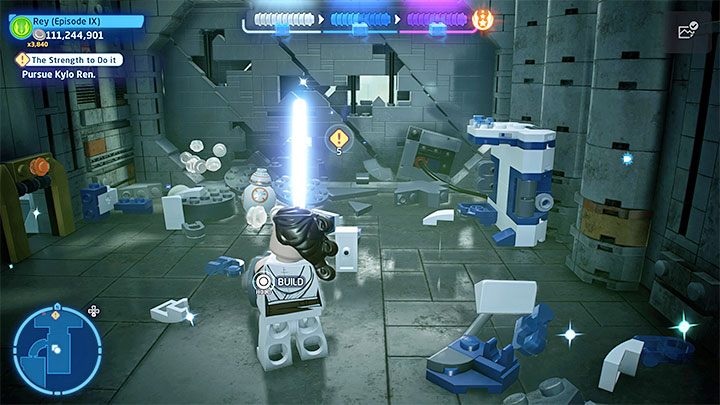 Destroy all the nearby objects. You can now build a blue terminal for BB-8 out of the fragments. Interact with it and complete a mini-game. You'll unlock the way forward and encounter Kylo Ren again.

The second phase of the duel 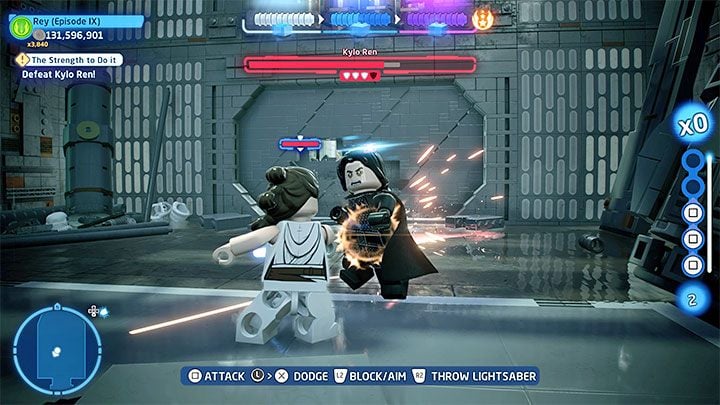 The second phase of the duel against Kylo won't surprise you. You must deplete his second health bar.

Just like you did before, use your lightsaber and dodge the boss' red attacks. At the end of the phase you'll have to overpower him once again. 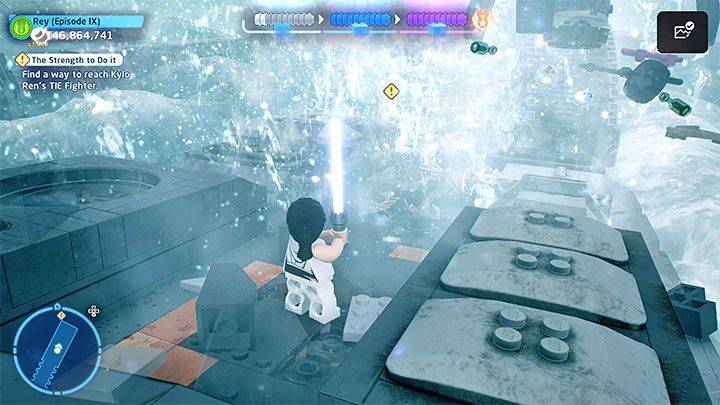 The floor will collapse. You don't have to do anything while you're hanging over the pit.

After landing in the new area go to the surface. From now on you must watch out for the waves hitting the wreckage. The waves are telegraphed with red lines - stay away from them and wait until it's safe to cross over. 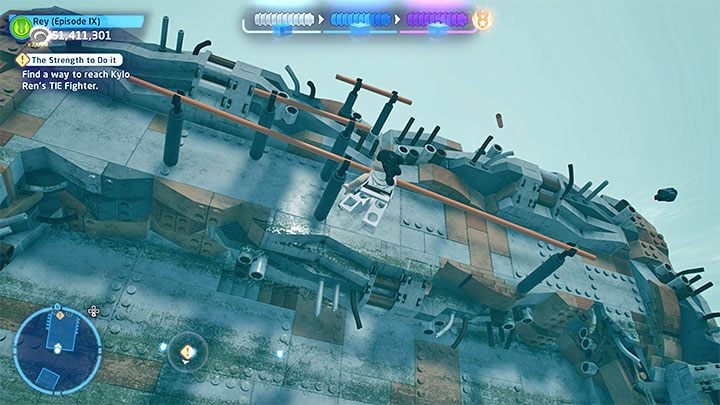 Climb onto the large round object. Ignore Rey's concerns and make a far double jump. You'll grab onto one of the edges. Now you must climb up. You'll ultimately reach a stable platform and face Kylo Ren for the final time. 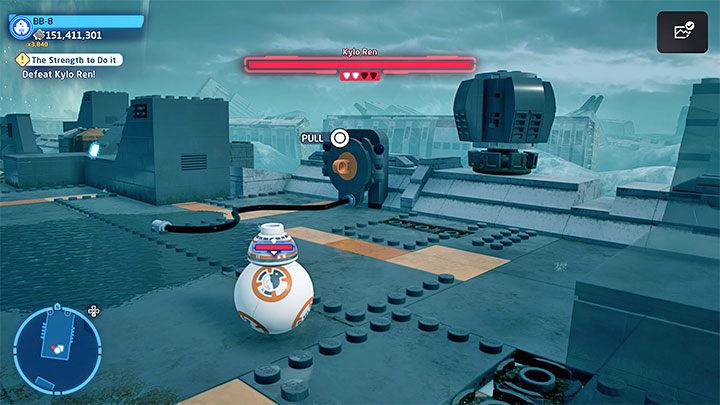 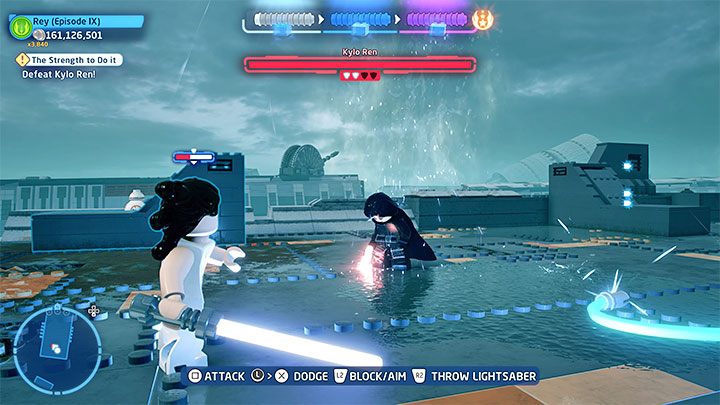 During this face you have more ways of damaging the boss other than your lightsaber.

The first new method involves BB-8. The droid can grapple the hooks found around the area (example shown in picture 1). Ripping out the hooks generates electric discharges which electrocute the boss if he touches them (it's also one of the mission's challenges). Be careful, as you can easily electrocute Rey as well. The camera is always focused on Kylo Ren, so you can easily end up accidentally backing up into the discharge. 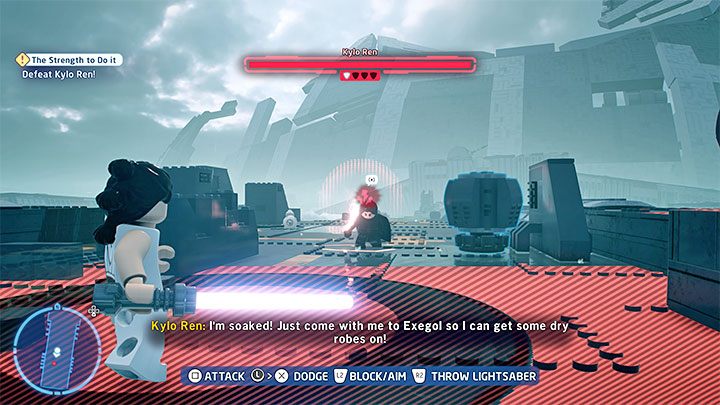 You can also lure Kylo into a large wave. If you notice a wide red line during the duel, immediately back away. Kylo will follow you and there's a large chance the wave will knock him down. Doing this completes one of the challenges in this misison. 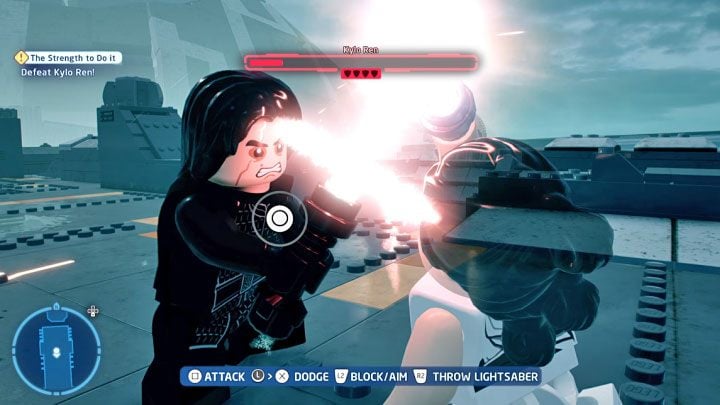 During the third phase you must deplete the boss's health bar three times. You can do so via the methods described above or with just your lightsaber. Be ready to fight back against Kylo when your blades lock.

The finale of the fight involves some more complex QTEs - you must press the buttons displayed on the screen several times. Complete the QTEs to finally win this long duel.