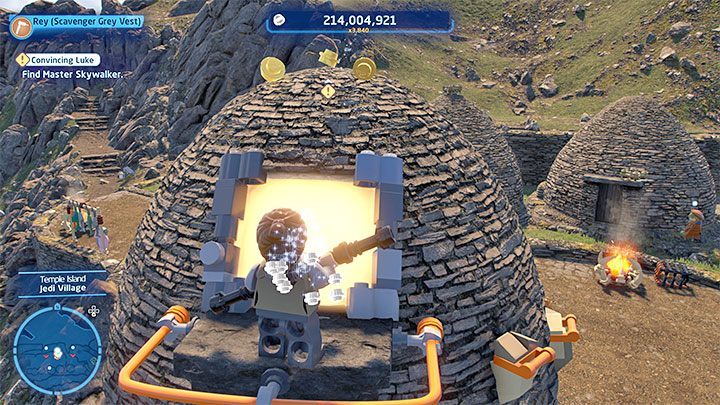 After completing the second level the game will take you to the Ahch-To temple island where you'll play as Rey. You must follow the objective markers to find Luke Skywalker.

Luke will lock himself in the hut. Use the orange bars to climb up and reach the hole at the top. This will let you get inside and talk to him. 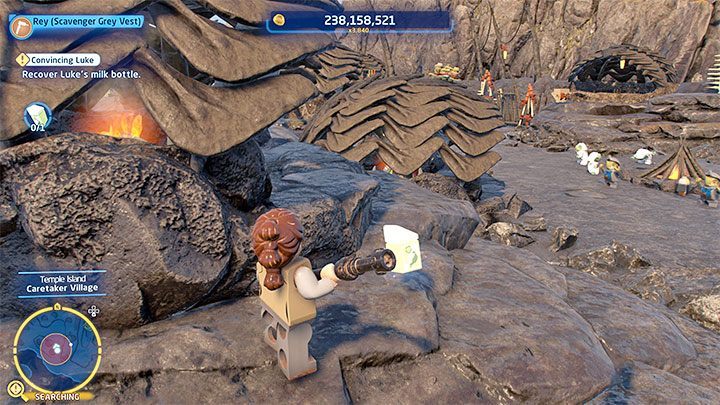 Leave the hut and keep following Luke. He'll task you with retrieving a bottle of milk. Follow the small creature until it drops the stolen item.

Return to Luke with the bottle and stand in the blue circle. You'll be tasked with training under his supervision. Reach the next circle to progress with the story. 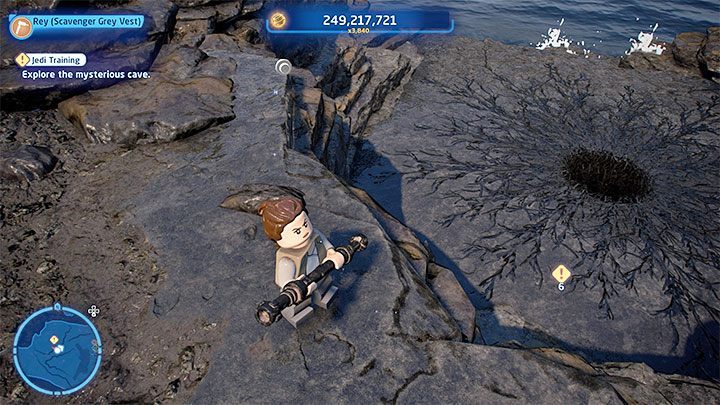 Your objective investigating the Mysterious Cave. To start the puzzles you must reach the rock ledges near the water and jump down the large, black hole. 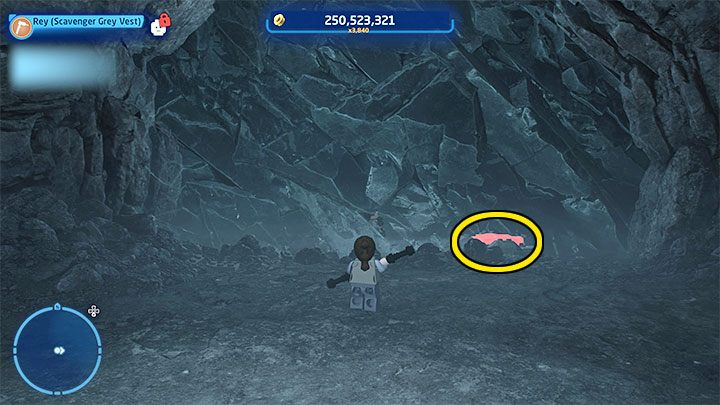 All the puzzles share some similarities - you'll see Rey's reflections (one or two per puzzle) on the other side of the crystal mirror which can repeat the movements made in the foreground.

The first puzzle is the easiest. Move Rey to the right so that the reflection can get onto the red pressure plate. It must remain there for a few seconds. A portal of sorts will open which you must enter. 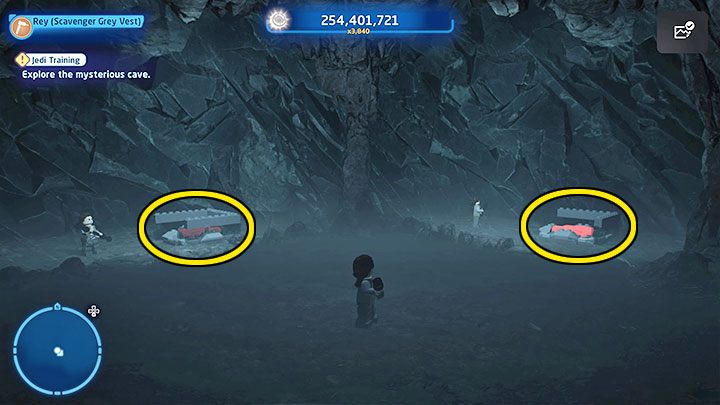 The second puzzle features two reflections which repeat your movements at the same time. You must make them stand on two different pressure plates pictured above. You should head right, while heading up and down will help you direct the reflections more precisely. Use the portal afterwards. 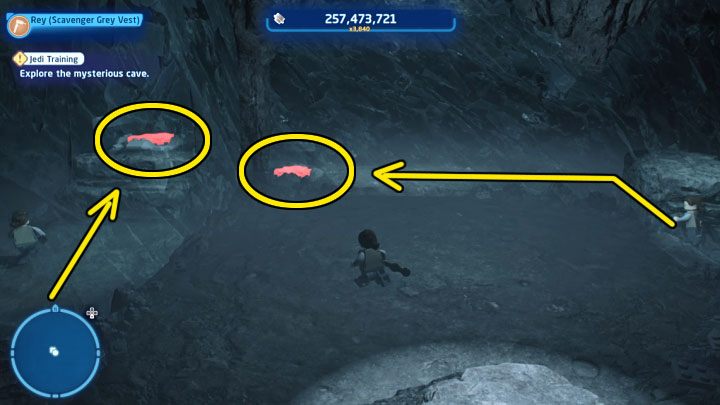 The third puzzle requires you to activate two pressure plates as well. First, run up and jump to let the reflection on the left stand on the plate on the left.

Then run left/up-left diagonally to direct the reflection on the right to the central plate. 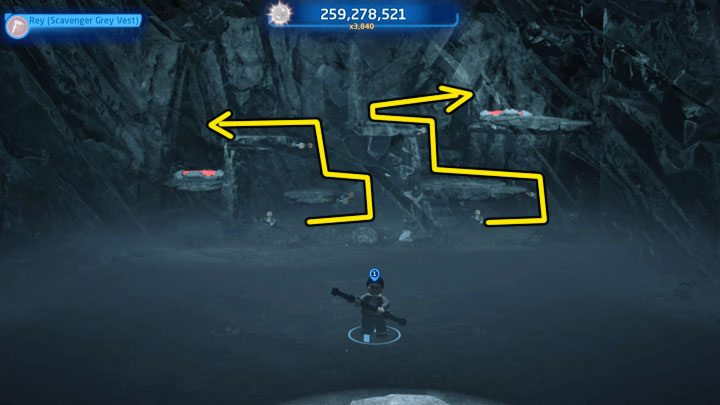 Now simply direct the reflection on the right to the plate on the right, jumping once along the way. Go through the last portal and enter the blue circle. 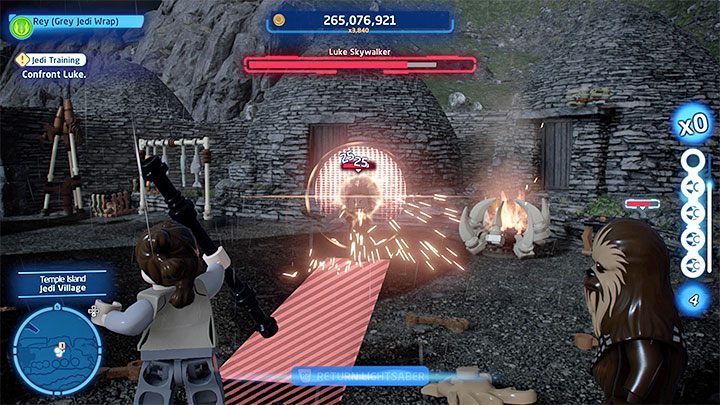 You'll face Luke at the end of your training, but it's not really a full-fledged boss fight. You can safely deplete Luke's health bar by using ranged attacks. 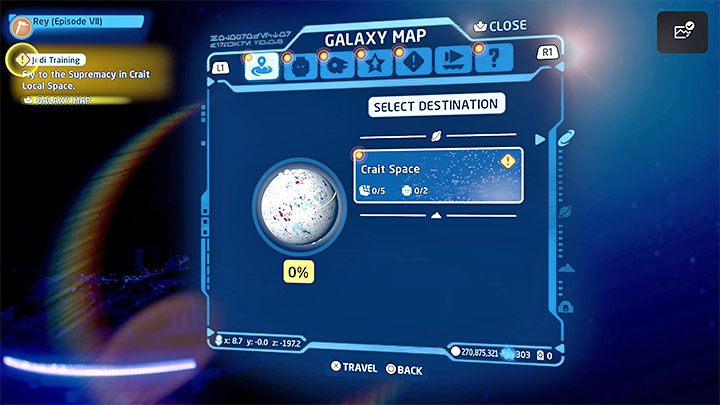 Ultimately, you'll end up aboard a spaceship. Open the galaxy map and fly to the orbit of planet Crait. Approach the Supremacy ship to start the No Snoke Without Fire level.

No Snoke Without Fire - challenges 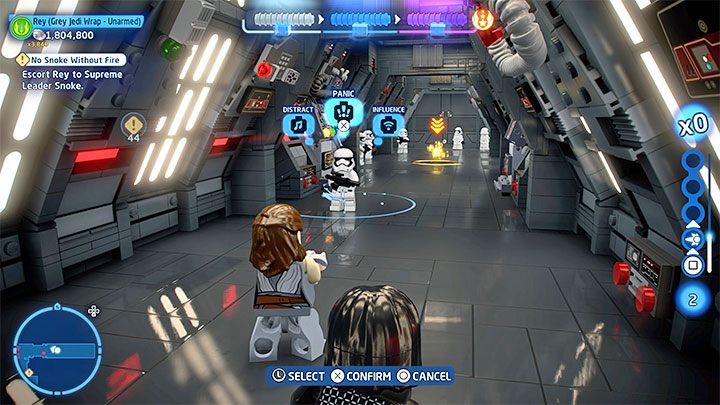 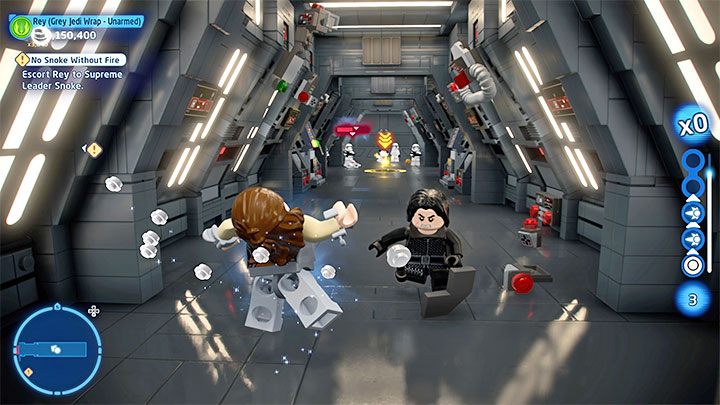 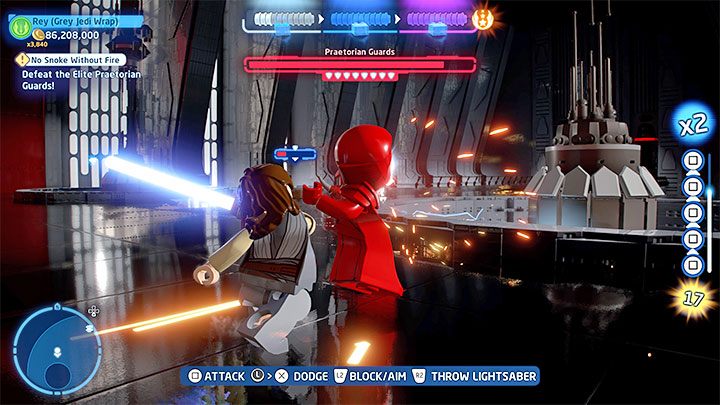 No Snoke Without Fire - walkthrough 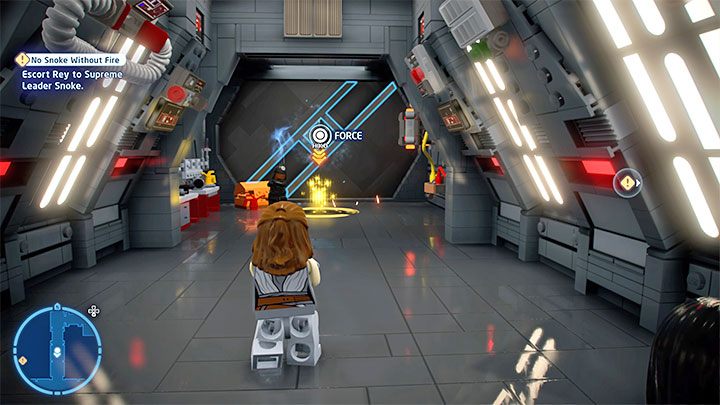 In this mission you'll play as Kylo Ren and the captive Rey. You don't need to do anything special on the way. Simply follow the linear path to where Snoke is. You can investigate the side rooms found along the way, but they only contain secrets.

After reaching the closed gate use the Force (as any of the characters) to open it. 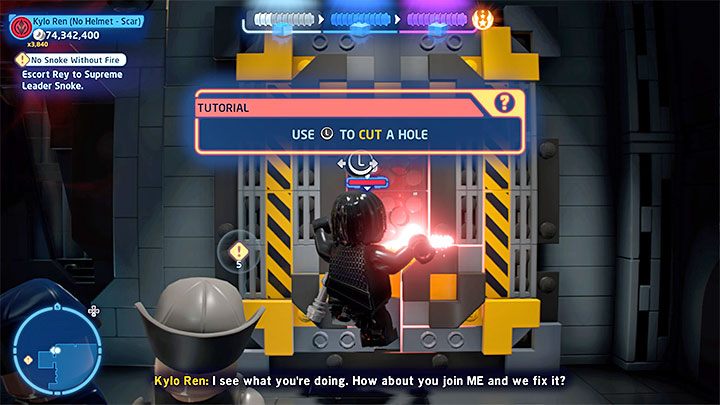 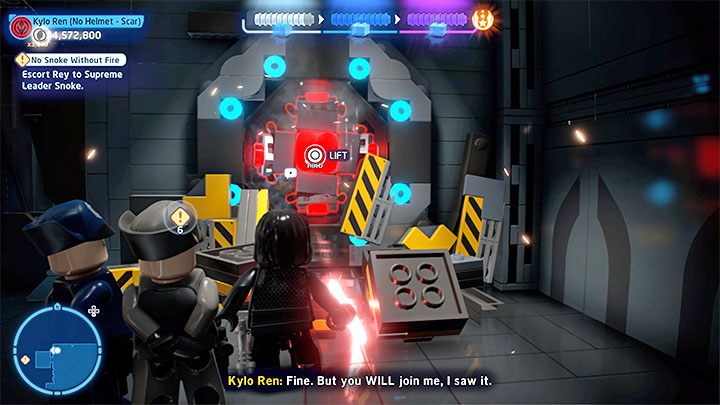 You'll reach another inaccessible passage. Select Kylo Ren and cut open a wall shown in picture 1. You'll discover a damaged energy source shown in picture 2, which you must remove from the slot. 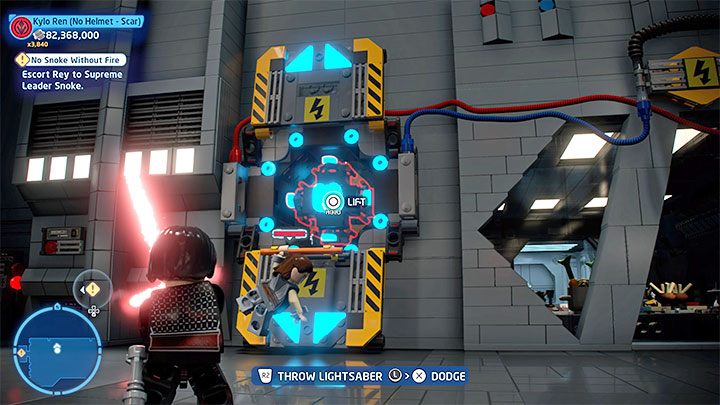 Now one of your characters must pull down the side lever. This will reveal a new energy source pictured above. Grab it with the Force and move it to the slot next to the closed passage.

You can now reach Snoke's chamber. 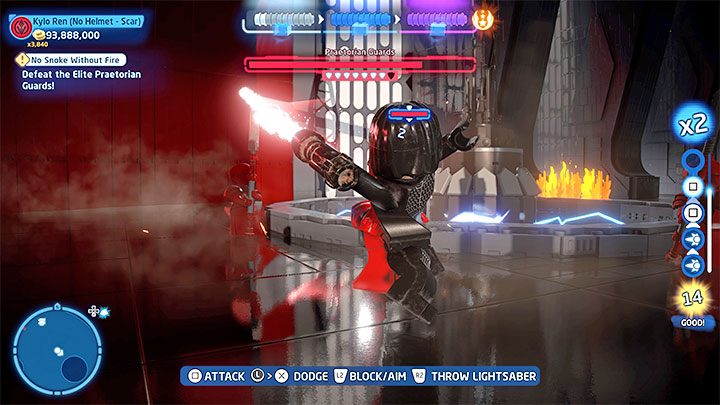 You'll face a horde of Praetorian Guards, which you can treat as this level's bosses. All the enemies faced share a single health bar at the top of the screen. Each eliminated guard depletes the health bar.

During this encounter we recommend focusing on a single guard at a time. The ol' reliable saber throws should do the job nicely. You can also fight them in melee, although then you're risking damage. 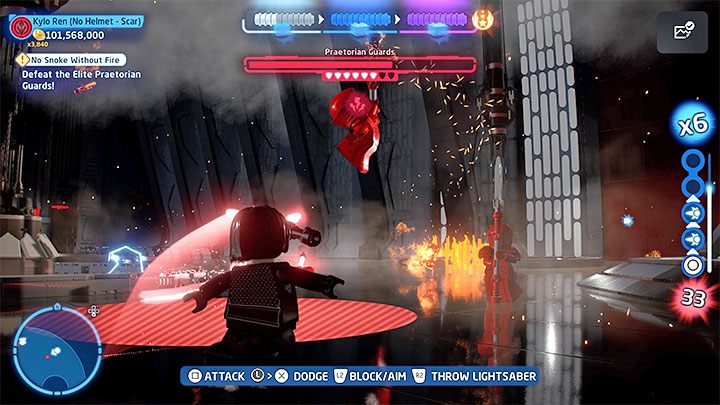 The Praetorians have access to some strong attacks - avoid the red lines and circles by jumping to the side. 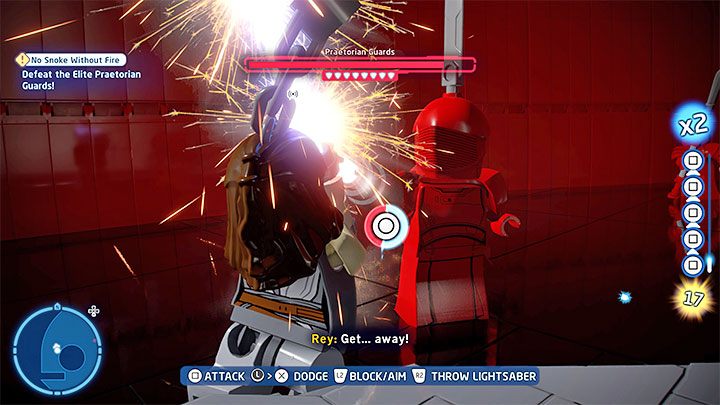 You may have to overpower the enemies during the battle from time to time by mashing the displayed button.

The encounter, all in all, is nothing new. It's simply long and forces you to deal with all the guards. Beating it may take you several minutes.