On this page of the guide to LEGO Skywalker Saga, you can find a description of the boss fight with Anakin Skywalker. He is the final boss of the Episode 3 campaign (Revenge of the Sith). You will face him in the story mission The High Ground. Our walkthrough describes how to deplete Anakin's 6 health bars, react to the boss's unique attacks and get to the places of the next fights with Anakin.

The location of the fight with Anakin Skywalker 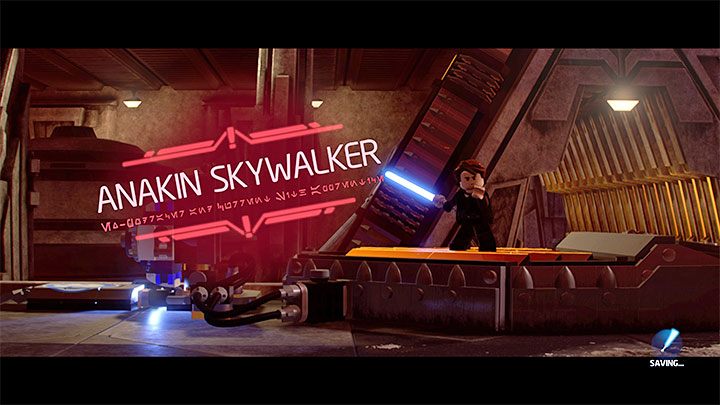 Anakin Skywalker is the final boss of Episode 3 campaign. You have to defeat him while completing The High Ground level. You will confront him after Padme and Obi-Wan land on Mustafar. 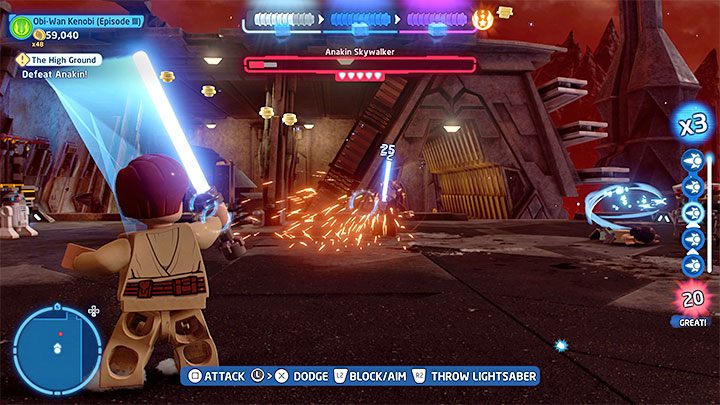 You will fight Anakin, the main boss of Episode 3, playing as Obi-Wan. Use lightsaber throwing technique (R2 or RT on a pad or LMB). This way, you can effectively deplete the first health bar of the boss (out of six!).

Stop throwing the weapon when Anakin starts blocking your attacks. You can wait for him to stop blocking the attacks or run up to him and hit him a few times with the sword. 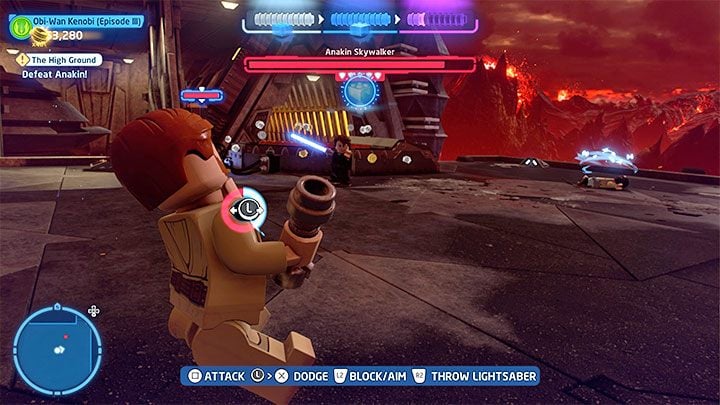 The boss can also use a Force grip. You have to quickly swing the left knob to the sides or press the side directional buttons to free yourself (you will receive damage if you fail). 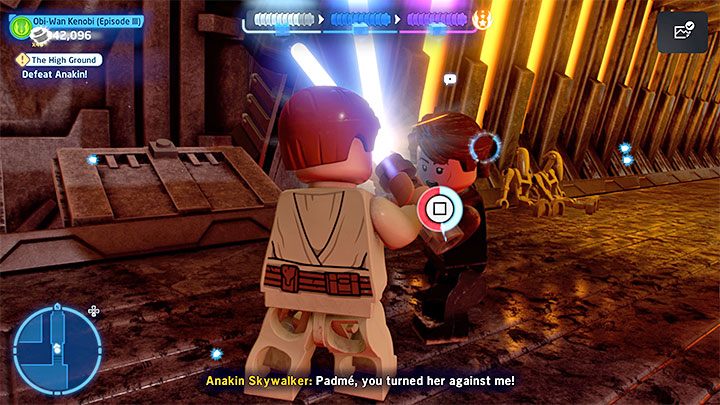 You have to deplete the boss of the first health bar. Anakin will pull Obi-Wan to himself, and QTE will trigger - you have to press the correct buttons rhythmically. 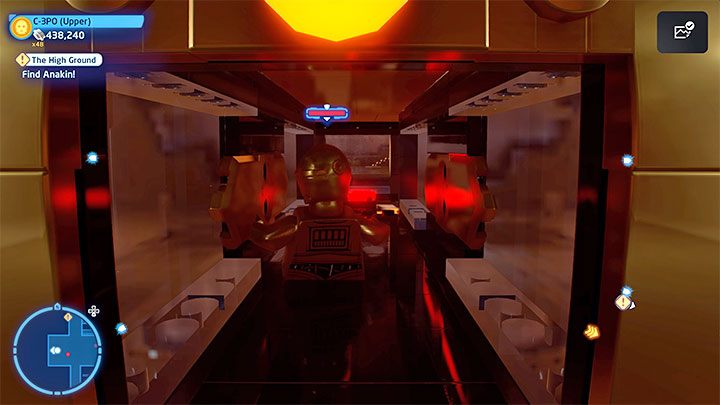 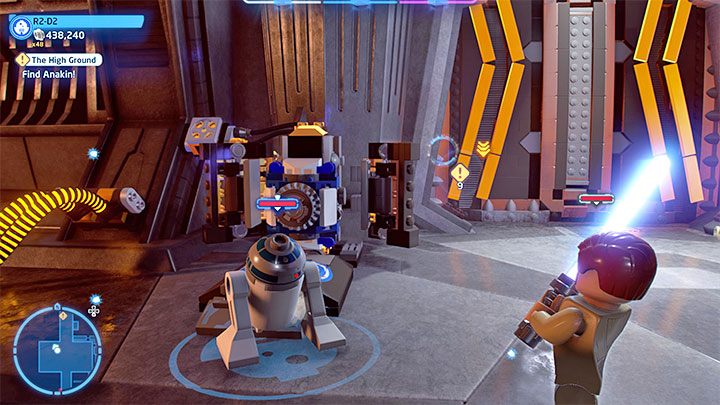 Now the first chase after Anakin will start. You have two options here: The first is to stay on the main path. After reaching the closed door, switch to C-3PO and disassemble the droid. Control the upper part of C-3PO to enter a small hole and reach the button shown in picture 1.

By standing on the pressure plate, C-3PO will unlock the blue terminal shown in picture 2. You can interact with it by controlling R2-D2 and completing the mini-game with rotating rings. 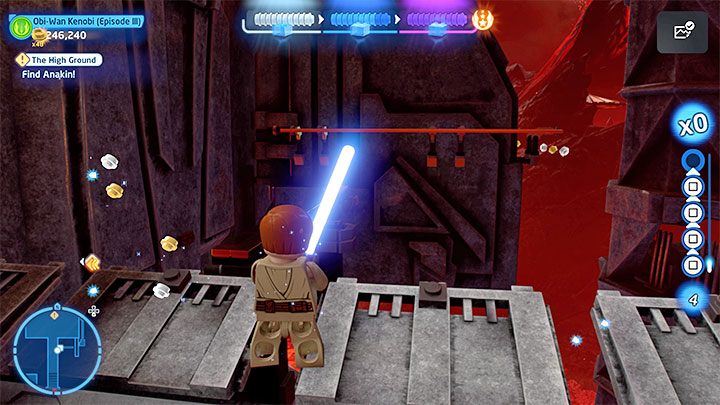 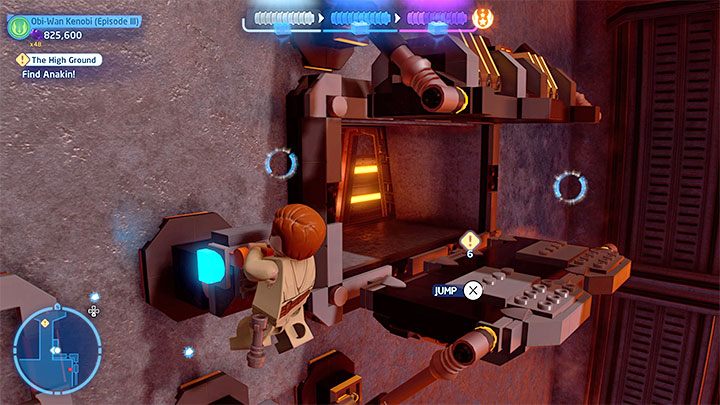 The second option is to choose an alternative path, and one of the challenges in the mission is related to it. Soon after the scene of grappling with Anakin, you need to approach the right edges and narrow passages from picture 1.

The linear route will allow you to reach the lever, and pulling it will open the hatch shown in picture 2. 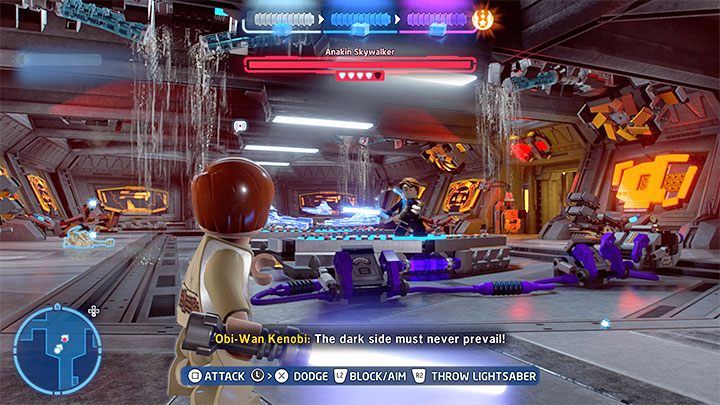 Both paths described above lead to the same place - you will reach a room where you have to fight Anakin for the second time. This fight does not stand out with anything new, and the only obstacle might be some nearby objects. You can destroy some of them to have more space during the fight. 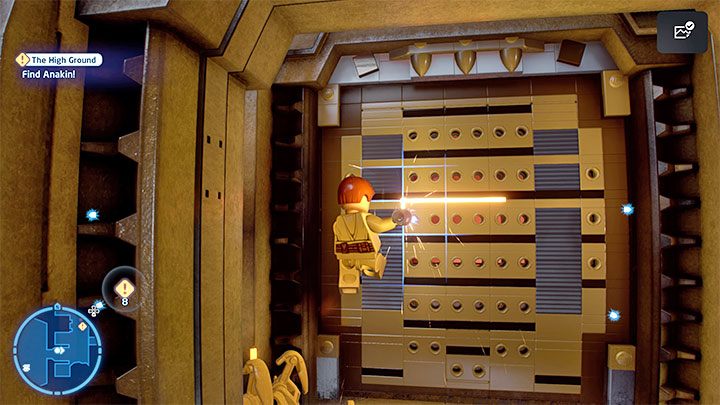 The defeated boss will run away again, this time to the location with lava. You can't catch up with him right away. C-3PO has to interact with the terminal at the closed passage. This will reveal the wall shown in the picture above, in which Obi-Wan can cut (any) hole with a lightsaber and unlock a path. 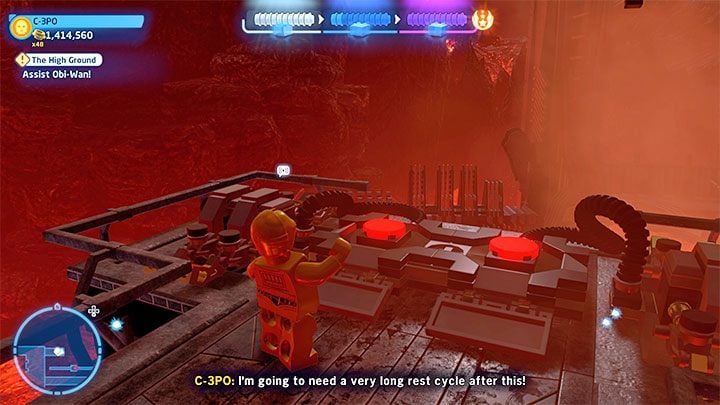 Continue chasing Anakin. Obi-Wan and Anakin will cross their swords again and then jump onto the rail.

You have to unlock the subsequent passage by controlling the droids. Use the fan to go down onto the lower shelf. Get rid of weak enemies there. Destroy the surrounding objects and then build 2 buttons. R2-D2 and C-3PO need to stand on separate pressure plates. 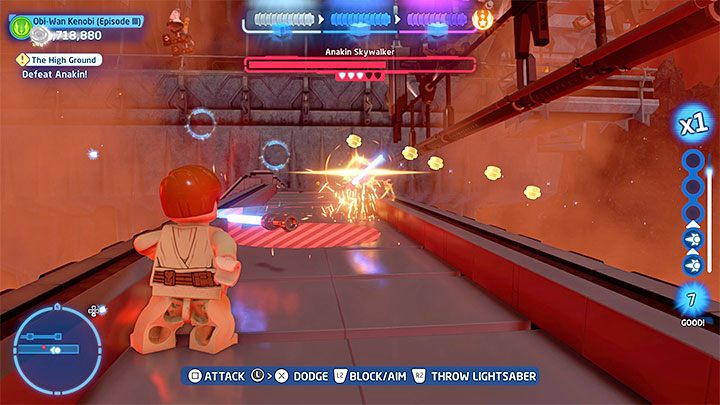 Switch back to Obi-Wan. Move forward slowly and complete a new scene of lightsabres clinching. After jumping onto the lower platform, you will have to fight Anakin for the third time.

During this fight, you have to watch out for the red circles on the ground, which indicate the place of the impact of large falling objects. Fortunately, the game gives you a lot of time to move away safely. 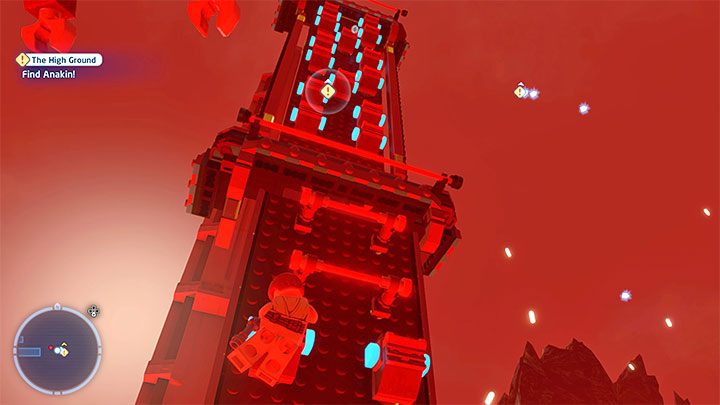 In the next scene, you will climb to the top of the vertical structure. The lava level will be rising, slowly sinking the structure, but you will have enough time to climb. The climbing is also not very complicated because you just have to press the jump button by the protruding edges. At the top, you have to face Anakin once again in a QTE fight. 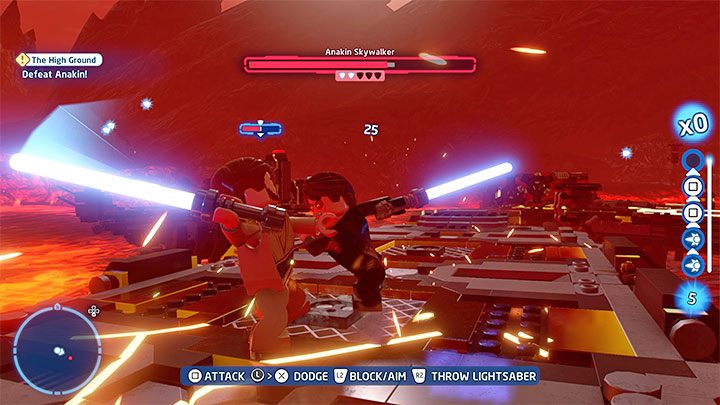 Wait patiently for the levitating platforms to stop moving. After that, jump onto the large platform where the fourth stage of the fight with Anakin will begin. During this and the next two stages, pay more attention to dodging the "red" attacks of the boss because you can easily make a mistake and fall into the lava. 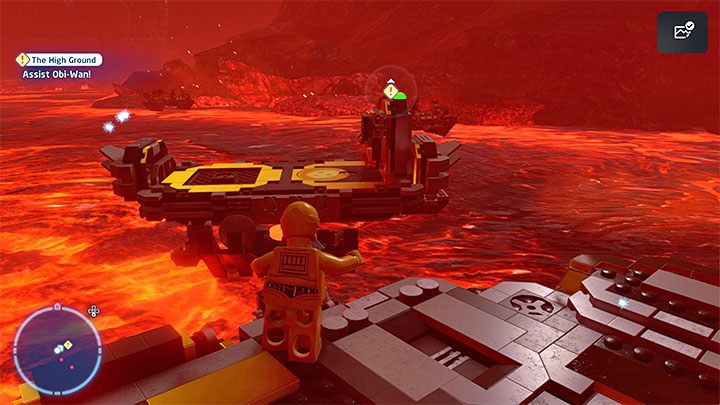 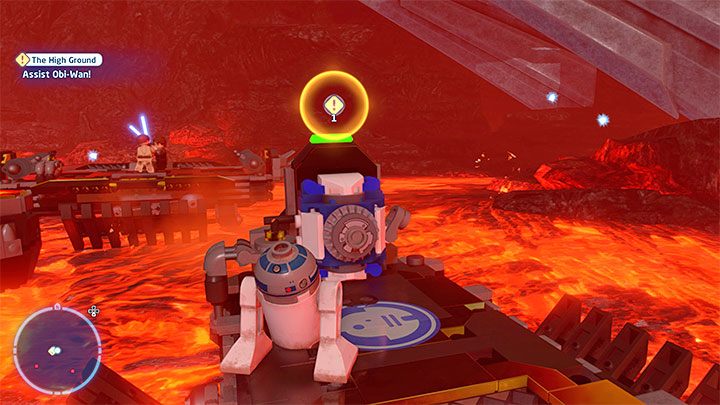 At the end of the level, Obi-Wan will have to use the help of accompanying droids: 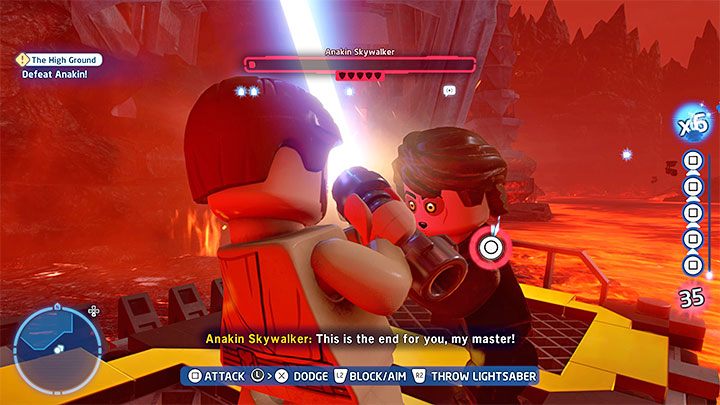 That leaves the last, sixth fight with Anakin to complete. Depleting the last red health bar of the boss will trigger a cutscene that ends Episode 3.