On this page of the guide to LEGO Skywalker Saga, you can find the second part of the walkthrough for Episode 7 (The Force Awakens). Our walkthrough describes the Low Flying Garbage level and the accompanying task of finding the scrap metal by Rey. You will learn, e.g. how to use Scavenger-class gadgets, how to get a new ship, how to destroy TIE Fighters and how to escape to orbit.

After completing the first story mission of Episode 7, you will return to playing as Rey. 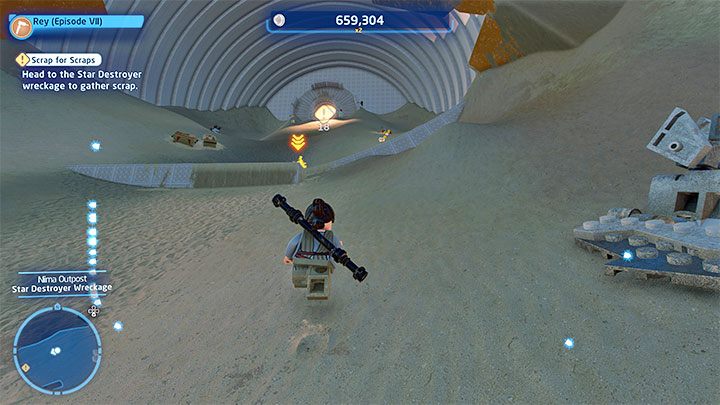 She will receive a task to find 20 pieces of scrap metal - go towards the wreckage of the Star Destroyer. You can use a vehicle to reach your destination or walk (this will take a longer time). Head towards the marked entrance to the wreck. 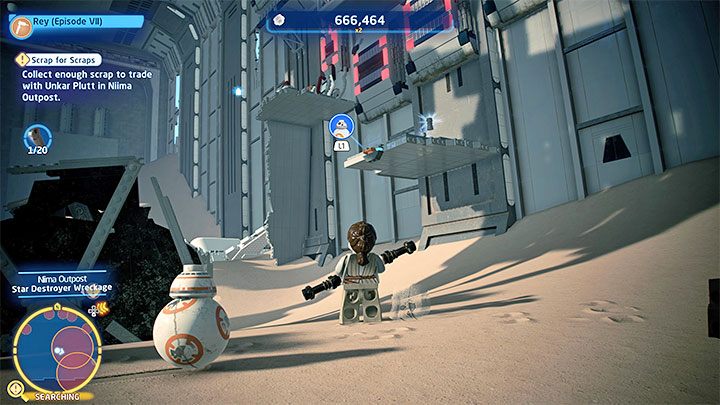 There are as many as 20 objects to collect in the area and their approximate locations are marked with circles on the mini-map. You can pick up a few pieces of scrap without having to meet any additional requirements.

BB-8 icons may appear on some shelves - these are places where you can use the droid's ability to pull itself. 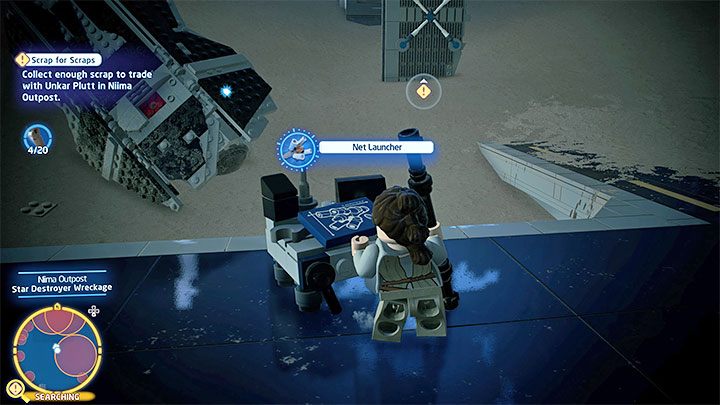 Unfortunately, you will need to use gadgets to get some of the items. Rey represents the Collector class. Locate the terminal to unlock the schematic shown in the picture above.

You will be able to complete the gadget crafting tutorial. Each time you have to hold down Circle/B and select a gadget from the list. It is worth noting that you do not need any materials - you will be able to craft a given object in unlimited quantities. Only one gadget can be active at a time. 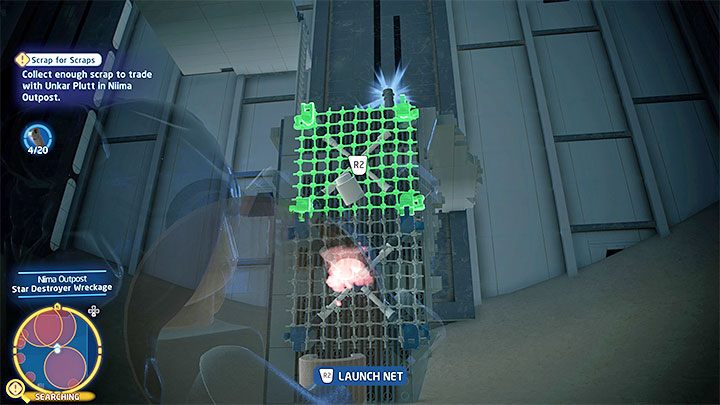 The first gadget you create will be the Net Launcher. You can use it on walls with X-shaped hooks. After setting up the net on a vertical wall like this one, Rey will be able to climb up. It is worth noting that you can place several nets next to each other - you have to do that to reach the top shelves. 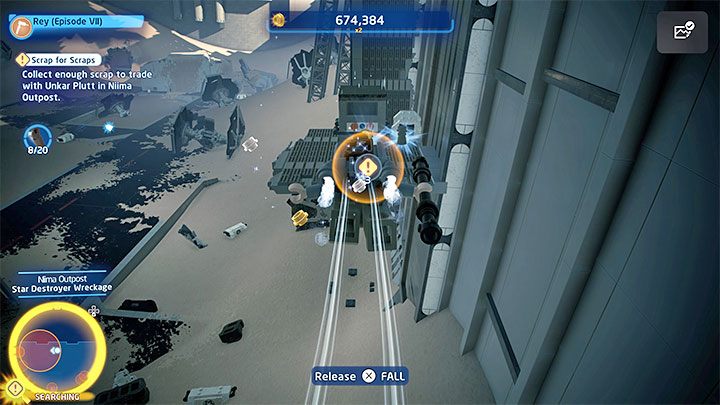 After using the Net Launcher for the first time, you will reach a ledge where, apart from scrap metal, you will find the second terminal. Use it to unlock the Glider and, as the name suggests, using it will help you glide - you have to hold down the jump button while in flight. Test it by gliding to the adjacent ledge. 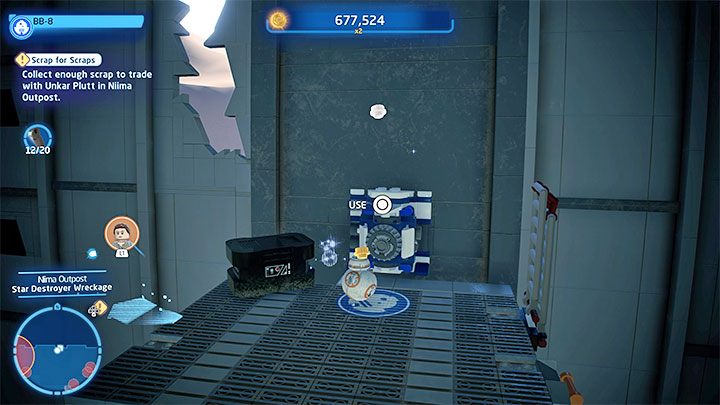 Push the crate off the ledge you landed on, jump down, and start building with bricks. Build a ramp and use it to reach a new balcony. There is a blue terminal in the area that must be used by BB-8. As a reminder, you have to complete a mini-game by rotating different rings and matching them. 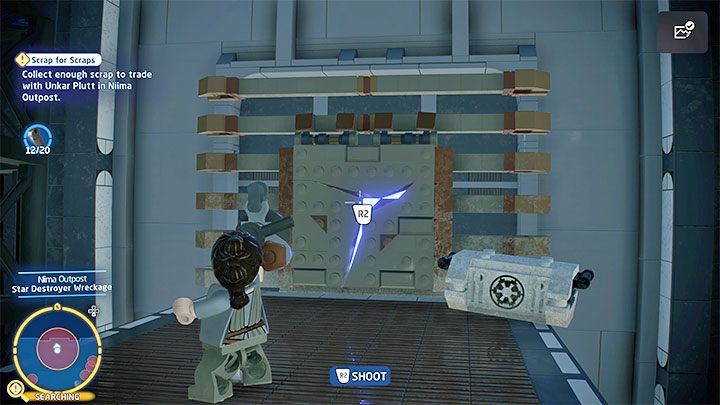 Glide to the next platform where you will find the last terminal. Using it will allow you to unlock the Breaker Blaster. This gadget can be used to destroy all objects with cracks - there is a cracked wall right next to you.

After getting all the gadgets, start using them (together with BB-8's pull) to reach all the remaining scraps in the area. The circles on the mini-map should make it much easier for you to find the missing objects. 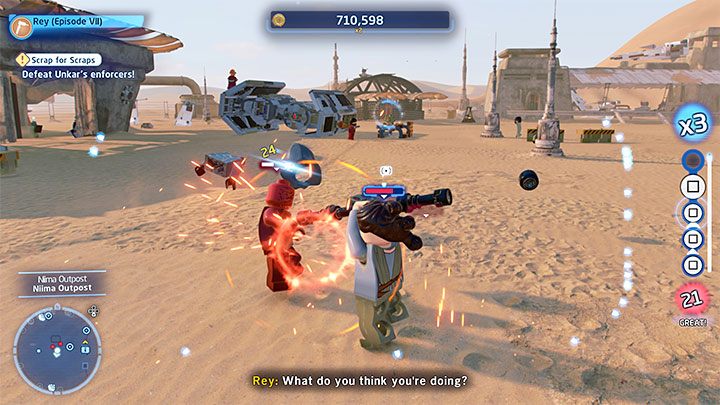 After collecting 20 pieces of scrap, leave the wreckage and head towards Unkar Plutt's shop located in the Niima Outpost. The destination is the blue circle.

You will be deceived and have to fight Unkar's mercenaries. They shouldn't pose a big threat. After the fights, reach the next blue circle to talk to Finn. 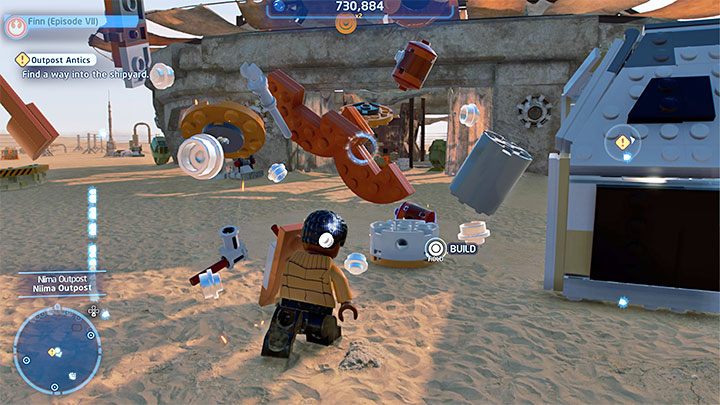 The new mission objective is to escape the First Order forces. Do not try to eliminate all enemies in the area, because new ones will appear in the place of the defeated ones.

Reach the shipyard - you have to start building here. Construct a blue terminal and use it as BB-8. 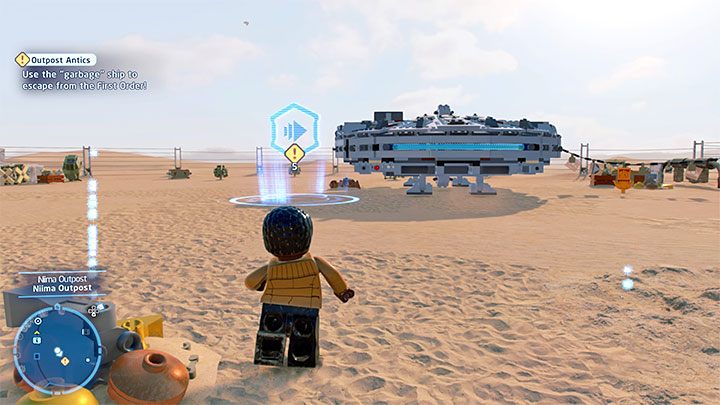 After watching the new cut-scene, head towards the passage where the gate used to be. The ship on the left will get destroyed when you interact with it. Instead, you have to board the "junk" - the ship on the right. You will advance to the Low Flying Garbage level. 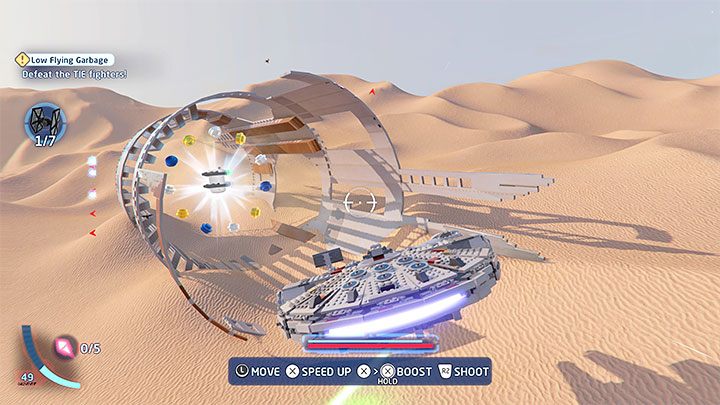 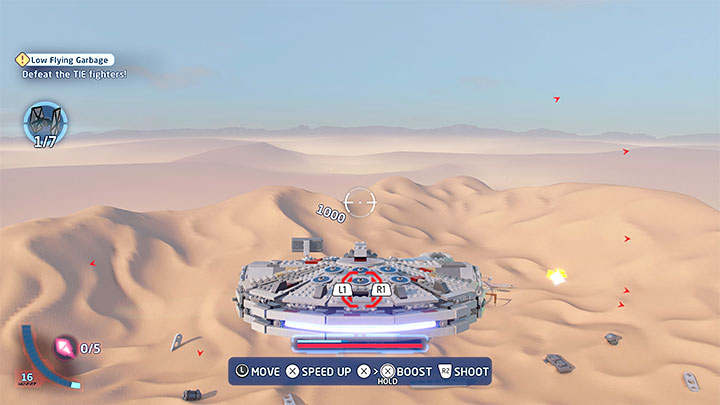 This stage takes place entirely in the air. The most important hint is its title - you have to avoid flying at high altitude. Your ship can then be targeted, but this won't fail the mission automatically - you can barrel-roll to break the targeting and avoid being hit (L1 R1 or LB RB on the controller). 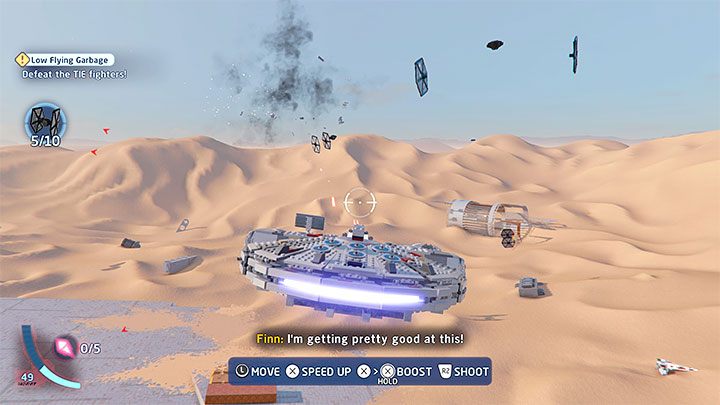 In the first part of the mission you have to destroy 3 groups of TIE Fighters, which consist of 7, 10 and 12 ships respectively. Enemy fighters should explode after a few shots, so you don't have to be afraid of their numerical advantage. 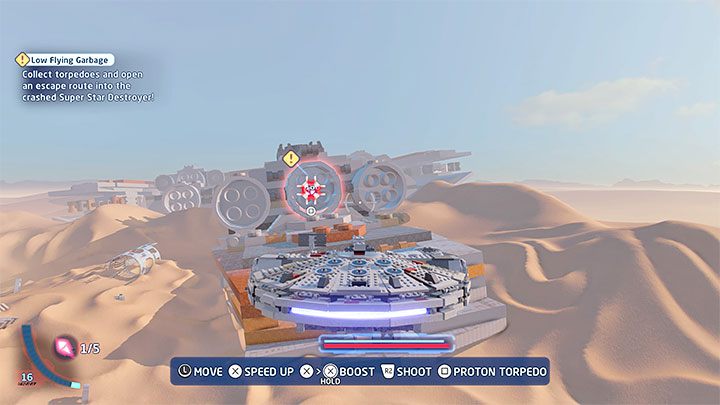 After shooting down all the fighters, you will have to use a torpedo on the wreckage of the Star Destroyer. Follow the markers to obtain a torpedo and then fly towards the wreckage. You have to wait until the tracking process is over - then launch the torpedo. 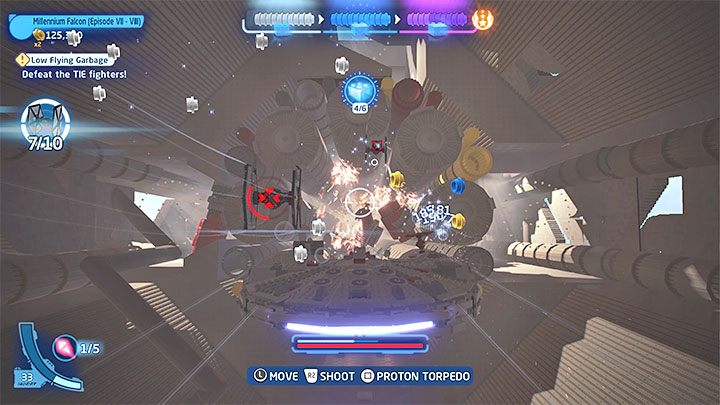 After you fly into the wreckage, destroy the next TIE Fighters. The scene of flying through the wreckage is the last one in this mission - a cut-scene ending the level will start soon.