On this page of the LEGO Skywalker Saga game guide, you can find the fourth part of the walkthrough for Episode 4 (A New Hope). The following walkthrough describes the This is Some Rescue level and its quests. You will learn, e.g. how to get two keycards, how to open the passage for Luke and Leia, how to get a disguise and how to return to the Millennium Falcon. 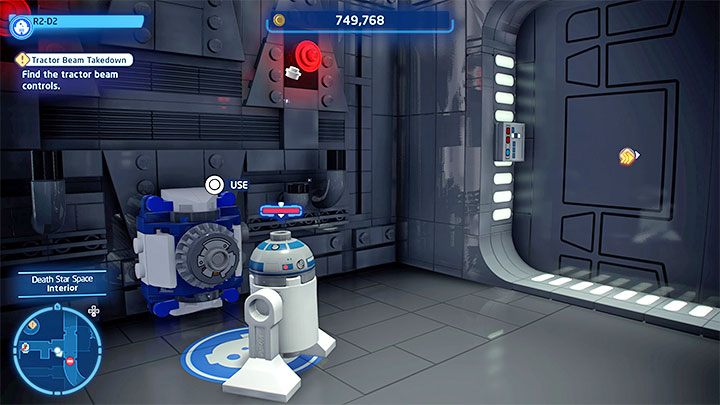 After resuming the free exploration of the Death Star, go to the tractor beam control room. On your way, you will encounter enemies - you can defeat them, e.g. by using the Force or mind trick.

Ultimately, you have to reach the blue terminal and complete the mini-game as R2-D2 to unlock a new passage. 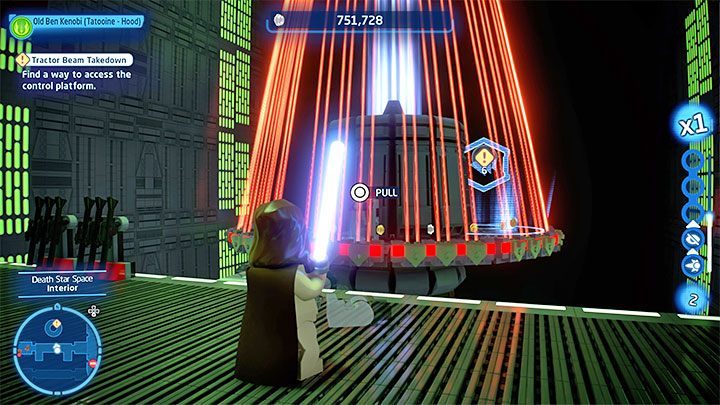 Get rid of the next enemies and check out the round platform on the right. Switch to Ben Kenobi and use Pull. After turning off the lasers, make a double jump towards the platform and reach the blue circle to start the This is Some Rescue level.

This is Some Rescue - challenges 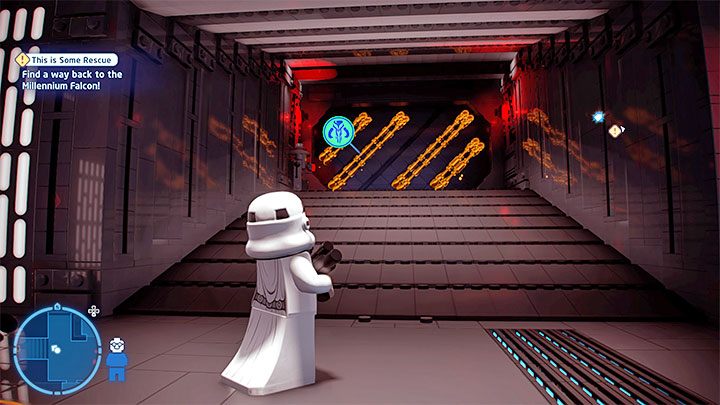 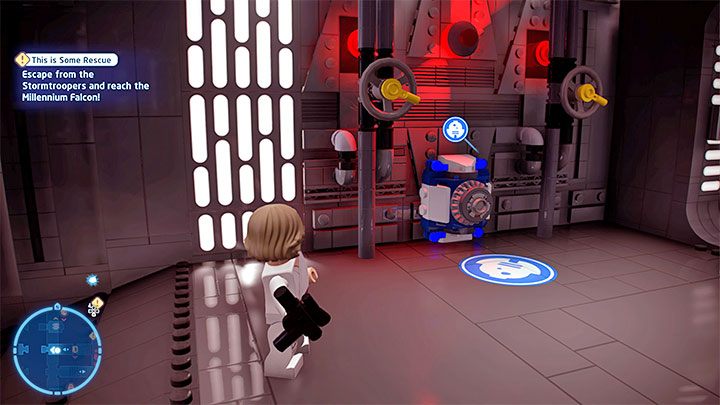 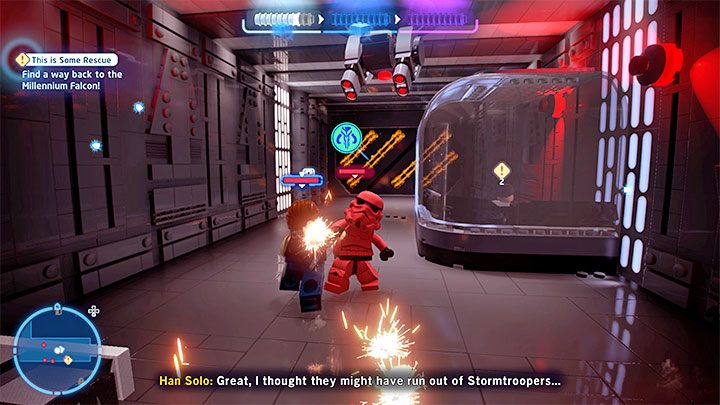 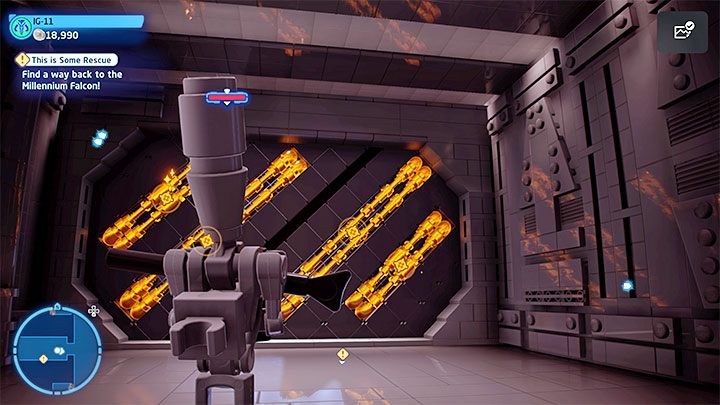 You must find a hidden room in the Death Star. It is only possible to complete the challenge in Free Play. You have to reach the corridor where you destroy the turret and get the first access card - it is shown in picture 1. Switch to any character of the Bounty Hunter class and use their weapon to destroy the golden elements on the gate shown in picture 2. You will unlock a larger secret area and complete the challenge.

This is Some Rescue - Han Solo and Chewbacca 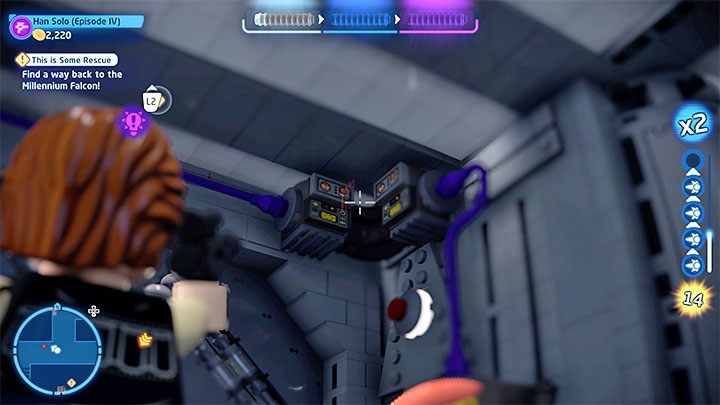 In the first part of the stage, the playable heroes will be Han Solo and Chewbacca. Deal with the first group of Stormtroopers and locate the weak point shown in the picture, thanks to which you will automatically unlock the passage.

In the next corridor, watch a short cut-scene and then start fighting. You can use covers, but remember to avoid grenades - you have to stop the enemies from throwing them or move away from the places where the grenades are about to explode. 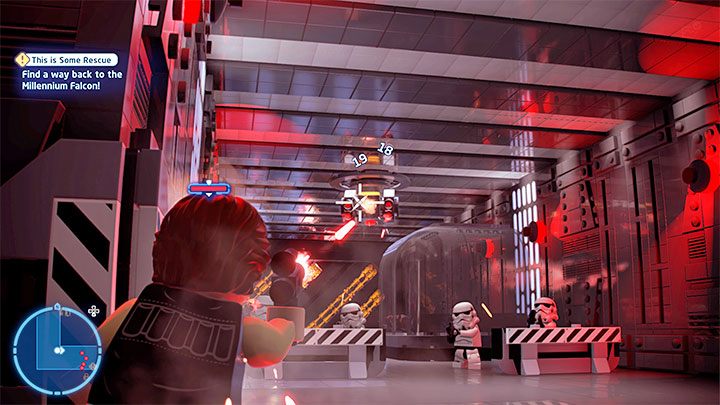 The officer is hiding around the corner, and apart from the new regular enemies, you also have to watch out for the turret near the ceiling. Fire at it from behind the wall to destroy it. Then deal with the rest of the opponents. 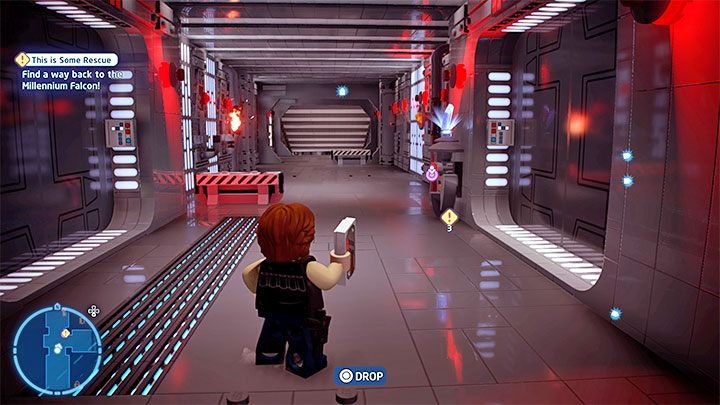 The defeated officer will drop an access card. Pick it up and return to the previous corridor. You can use the access card to open the door shown in the picture.

Watch the cut-scene - you have to open the door for Luke and Leia. 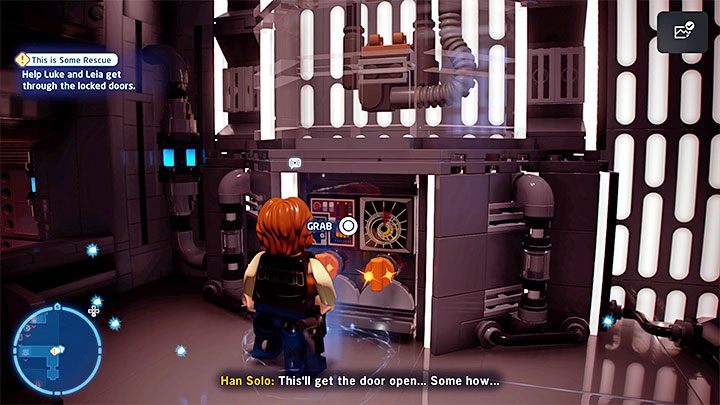 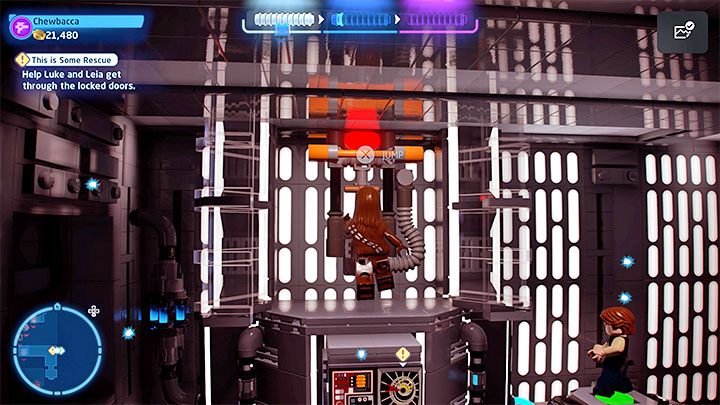 Start by dealing with a few enemies in the upper room. You can complete the mission objective in two ways:

The first method is to solve a few puzzles in the control room. Build the object shown in picture 1 and pull out its fragment. Place one character on the button, switch to the other character and grab the handle shown in picture 2. 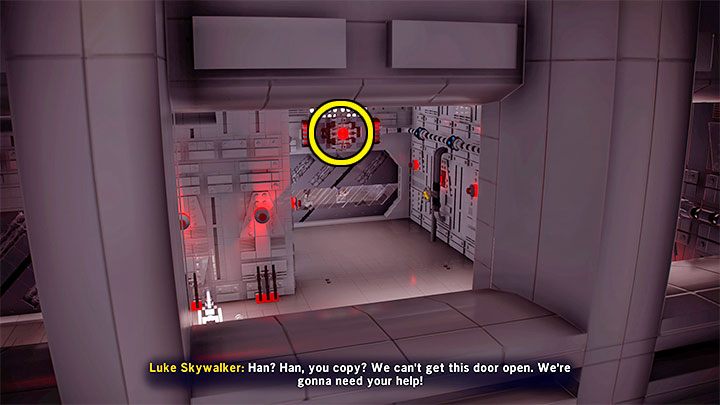 The second method is to stand at one of the openings through which you can see the closed door. Use a ranged weapon to hit the red button marked in the picture above - you will help your companions faster and, at the same time, complete one of the challenges.

This is Some Rescue - Luke and Leia 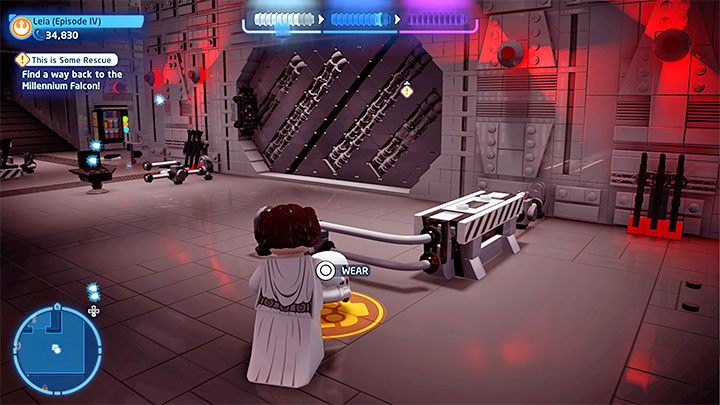 Defeat enemies - you can use covers here. After you get rid of the first group (the next ones may appear if you don't continue the mission), look around for the elements of the Stormtrooper's armor - the torso and the helmet. You have to equip your character with a disguise. 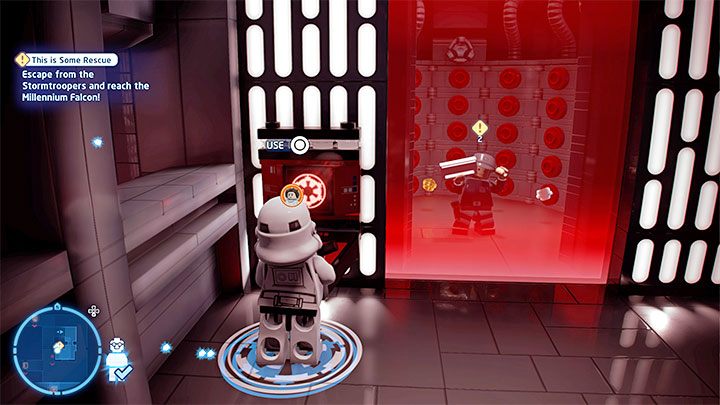 Wearing the disguise, go through the adjacent corridors to the red console shown in the picture. Since you are disguised, you can interact with it - complete the mini-game by pressing the buttons. The force field, behind which the enemy officer is hiding, will be disabled. Defeat him and take his keycard.

Reach the nearby locked gate and open it. 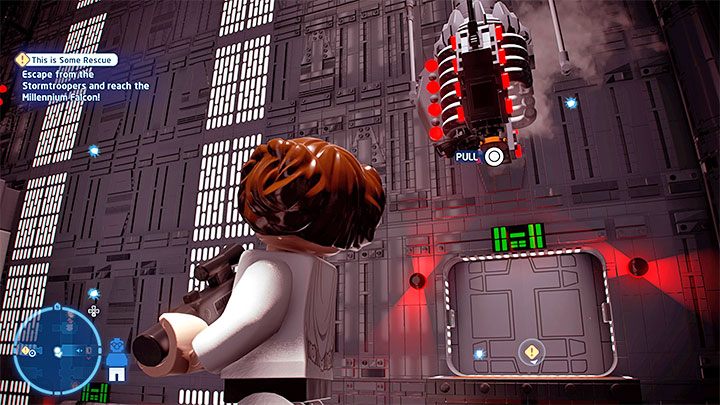 The path will lead you to the rift - you have to find a way to get to the other side. Start by shooting at the opponents standing on the distant platforms.

After dealing with the enemies, check out the hanging upper structure. You can use Pull here (the picture above) - this will help you cross the rift. After you get to the other side, keep moving forward until you trigger the cut-scene that ends the level.