On this page of the LEGO Skywalker Saga guide, you will find all the secrets and collectibles that make up the minikit available in Episode 2, Attack of the Clones. Collecting these items will unlock: Naboo Royal Cruiser, Jango's Starship, Jedi Starfighter, Republic Assault Ship, and Count Dooku's Solar Sailer.

A Wrestle with Wesell 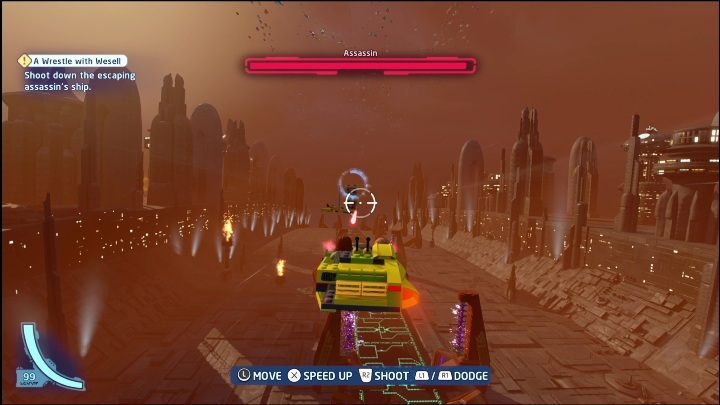 The first part of the minikit can be found at the beginning of the route. To get it, you have to destroy the element moving above the arena. If you pass it, you have to restart the level. 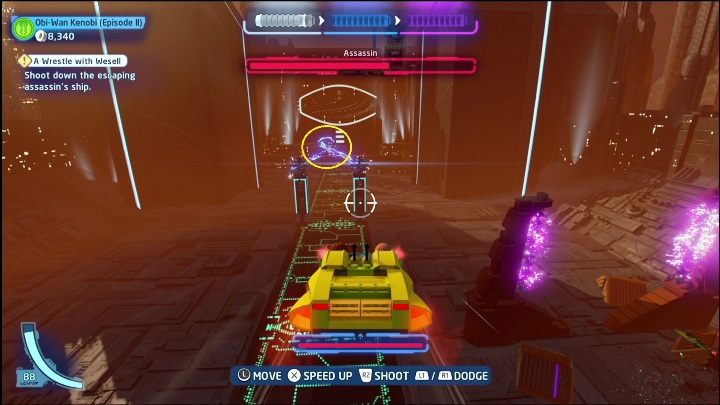 One of the elements of this minikit is between two columns surrounded by electricity. The collectible itself is also electrocuted, but not strong enough to hurt you. You just have to fly between these columns to get the minikit part. 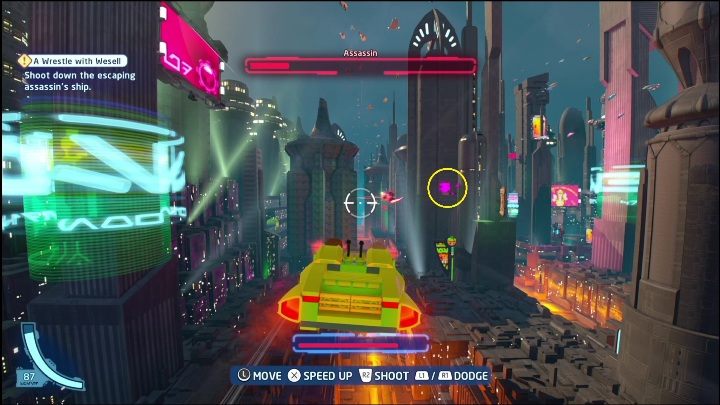 To get the next part of the minikit, you have to destroy three glowing elements. They are attached to skyscrapers and are easy to knock down during combat. 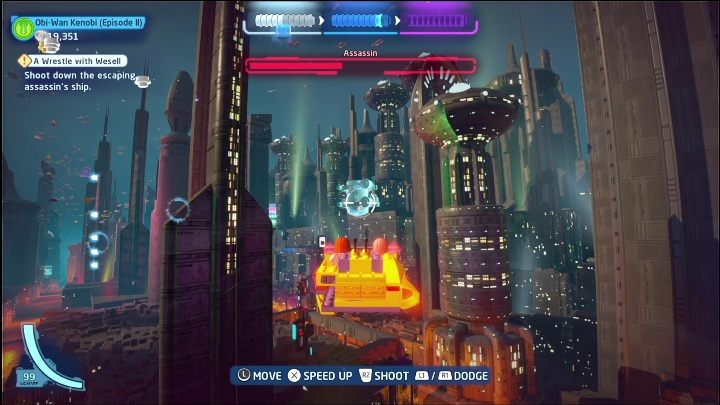 You will get the next part by flying into the largest object in the city. You can fly through its holographic projection without any problems to get the collectible. 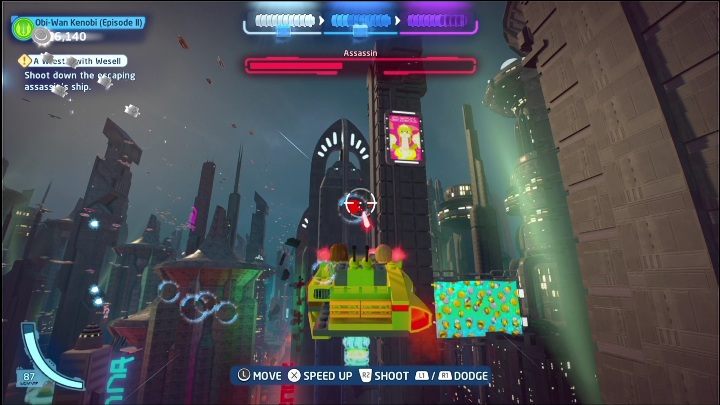 You will get the last part for destroying 5 holographic posters. You can do it at any stage of this level.

The Hunt for Jango 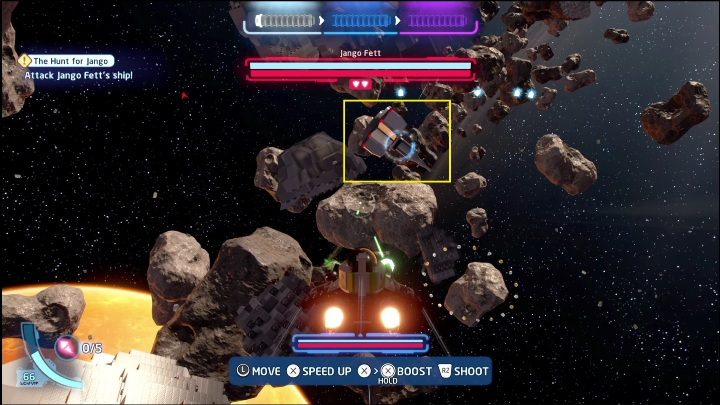 When fighting in outer space, you can destroy the elements that will give you another part for the minikit. You have to destroy (shoot down) 5 parts shown in the screenshot above. 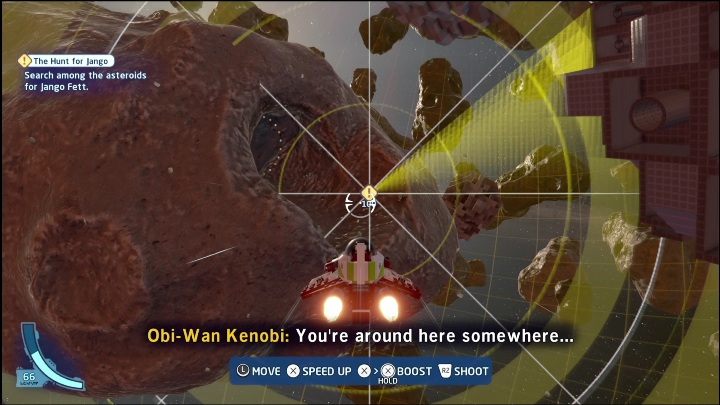 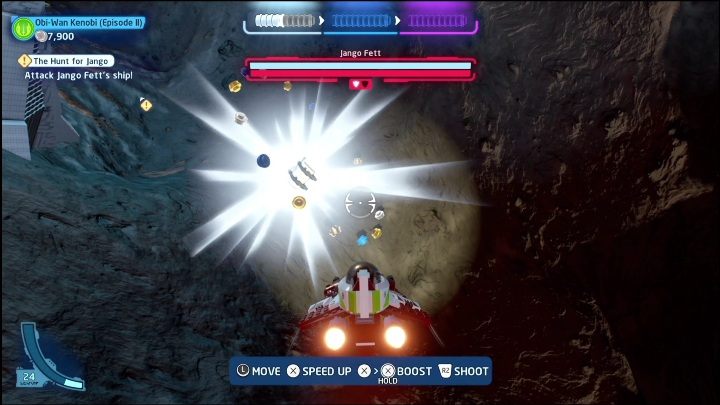 Another part of the minikit can be found in the asteroid, on its right side. You have to get off the track a little bit - the element is flashing so you shouldn't have problems with noticing it. 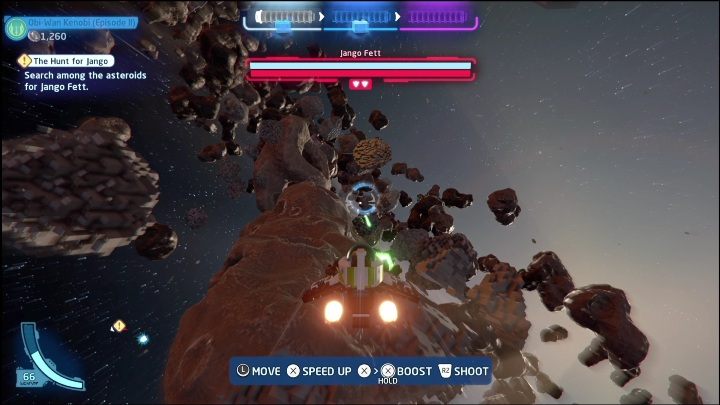 The remaining 3 parts of the minikit can be found by simply flying through outer space. This is not a race - you are free to explore the area while your opponent is flying in a different direction. The whole minikit can be obtained in one go. 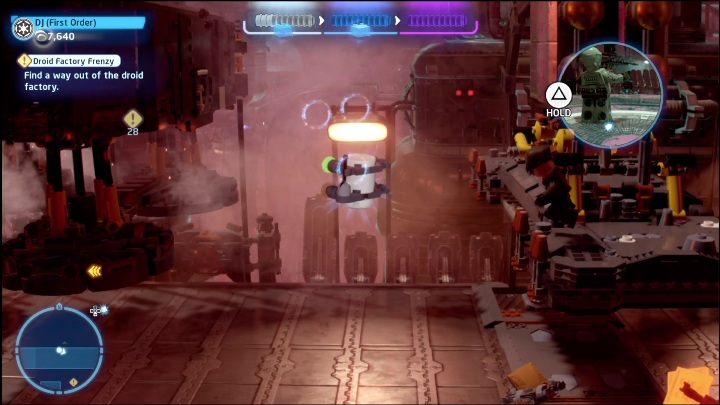 It is worth starting with the fact that it is mostly impossible to get the majority of the collectibles on this level during your first playthrough.

The first element is on the conveyor belt - the on which you will appear. To get it, you have to jump on the mechanism and then jump towards the minikit part. 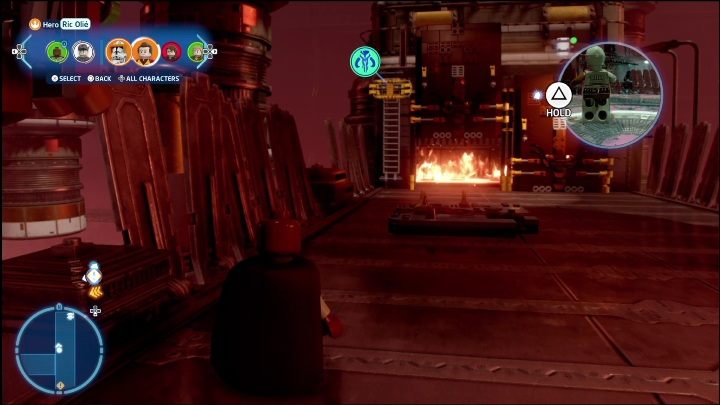 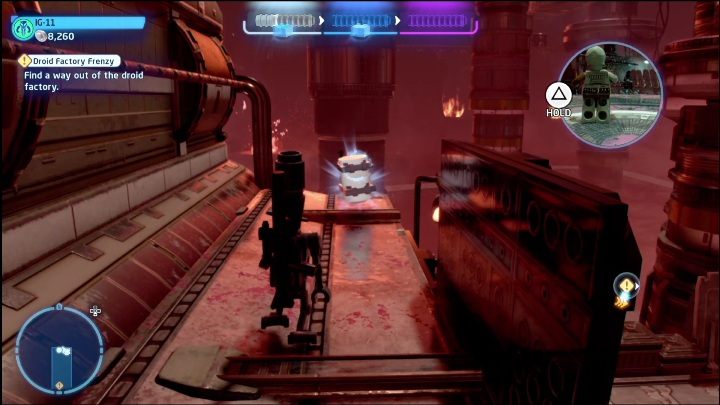 You need a Bounty Hunter to get the second collectible. Only this character will unlock the ladder and climb up to the minikit. 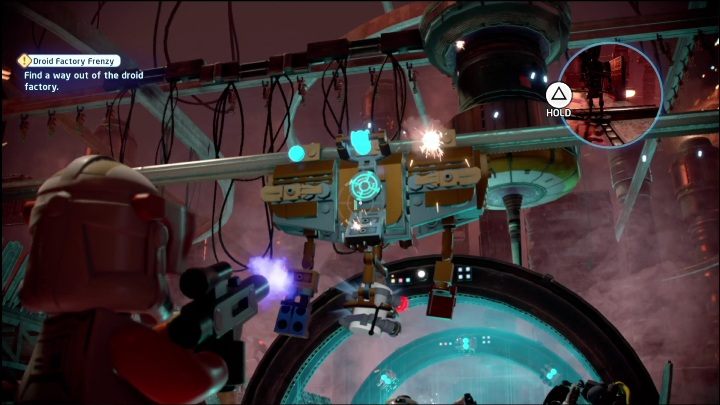 You need someone who can shoot to get the next part. Look up when you are on the conveyor belt. 1 out of the 3 sliding objects has a pinned collectible. To make it fall on the belt, you need to shoot down the point glowing above it. 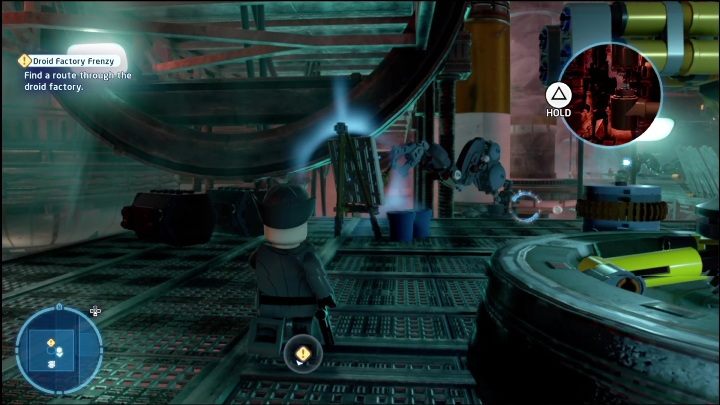 You will receive the next part of the minikit for destroying the painting on the canvas. 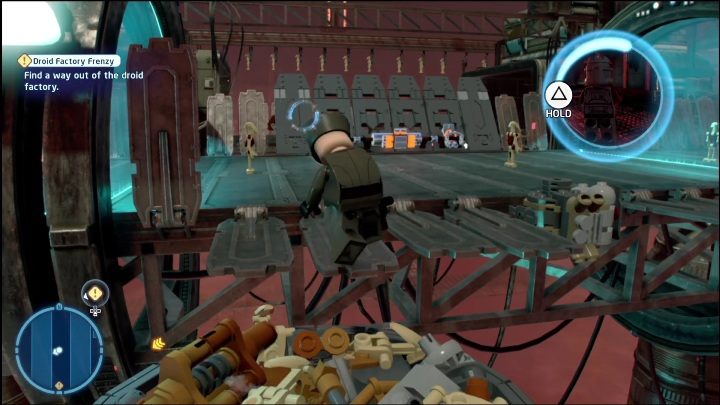 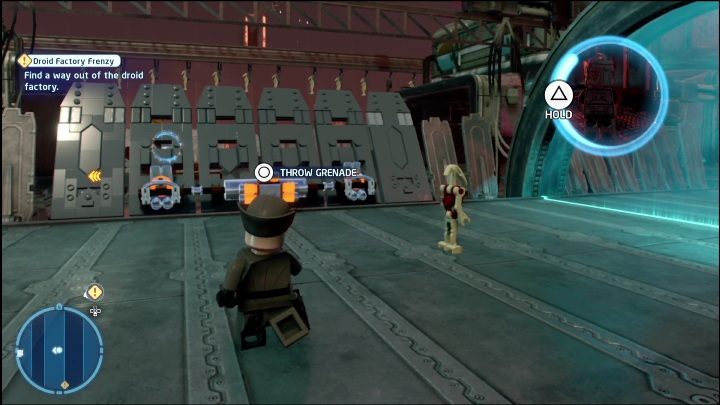 Getting the final part is not difficult, but it requires you to make progress in the story. To get to this point, you need to be at the very end of this mission, which happens after unlocking all production lines.

It is worth remembering that you need a grenade to destroy the wall - only Villains have these. 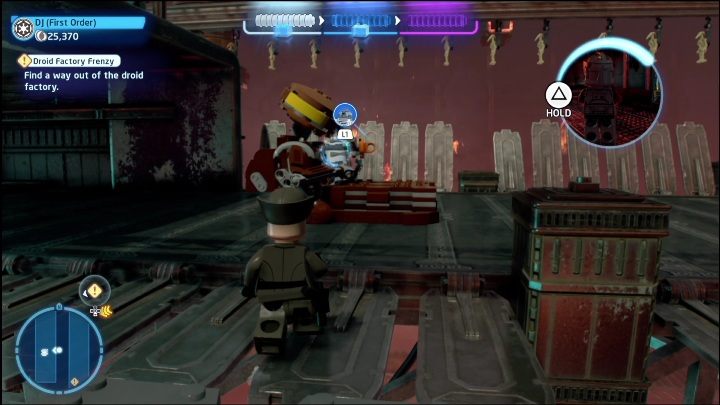 After you go further, use the astromech droid to get to the last part of the set. 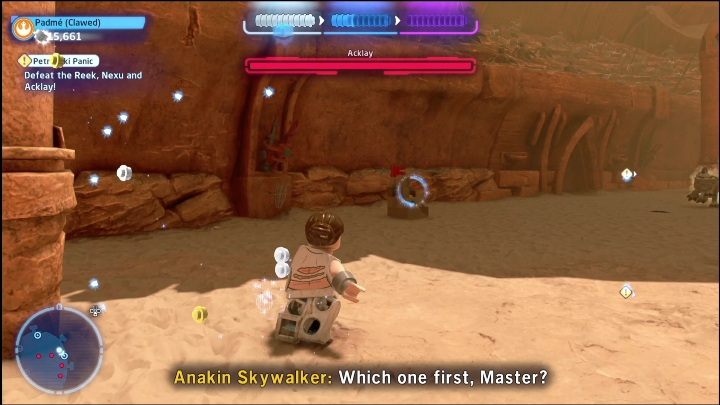 In the arena, you will see a few objects made out of Lego bricks (like in the screenshot above). They are characterized by the red part at the top of a small construction. You have to destroy 5 of them to get a part of the minikit. 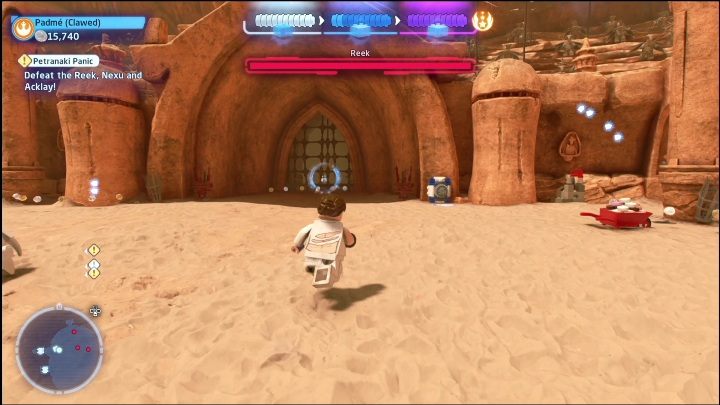 You need an astromech droid to unlock the second part of the minikit. It is the only one that can open the passage to the collectible. 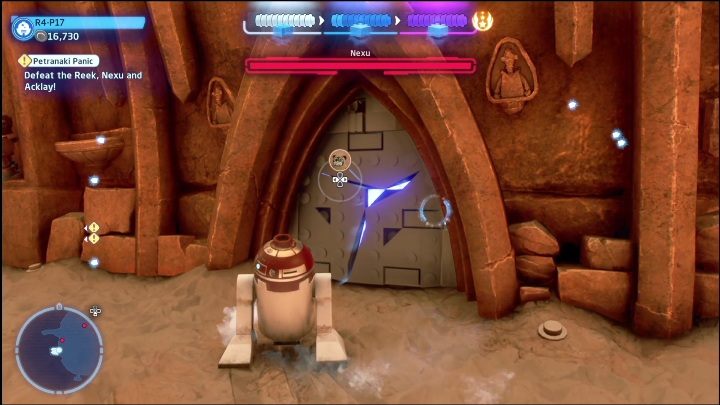 You will need a character from the Scavenger class to get the last part. You also need a breaker blaster unlocked later on in the story, in episode 6. 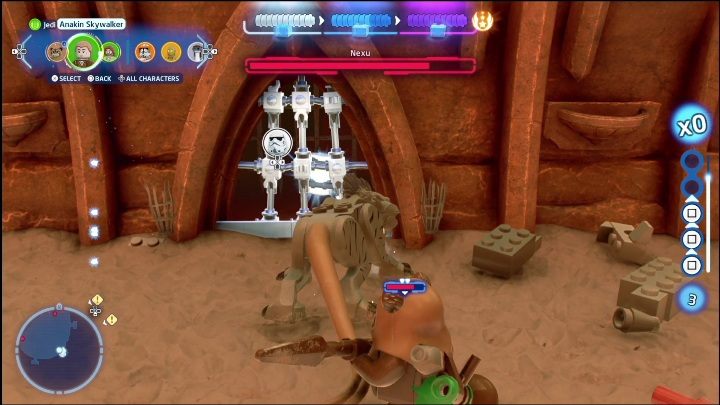 Another character you need is a Villain with grenades. Thanks to them, you will destroy the bars blocking access to the collectible. 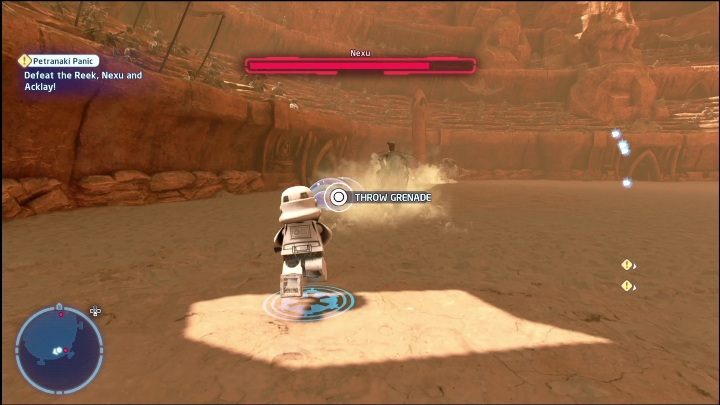 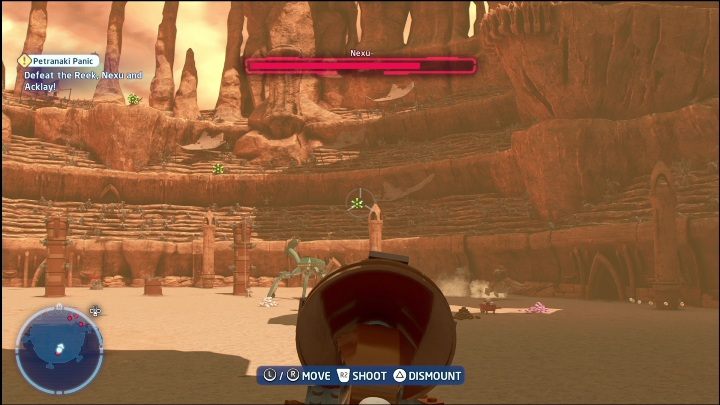 With the help of a Villain, destroy the object lying on the arena, and then build a turret from its bricks. Use it to destroy 5 green elements - this will give you the final collectible.

The Battle of the Jedi 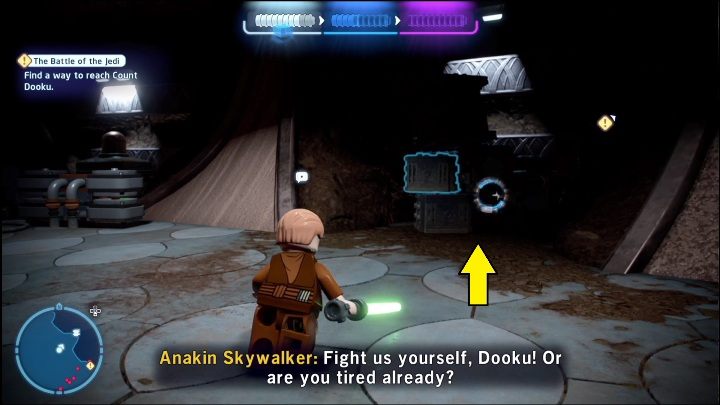 During the fight, you can find a part for the minikit. To get it, you need to destroy the bricks that are blocking your way. These are located between two wooden ramps. 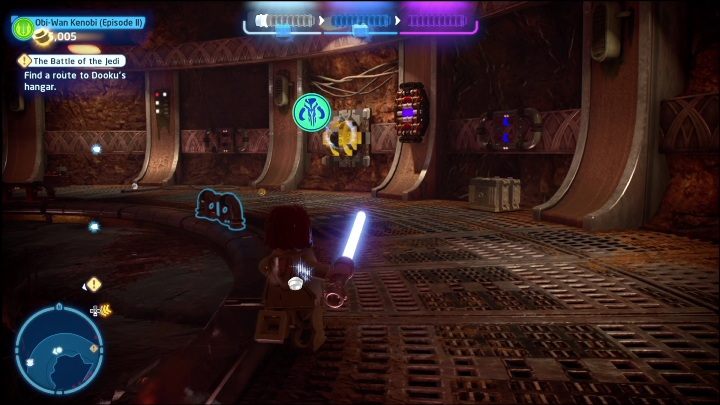 To get the second part of the minikit, you need a Bounty Hunter. Only their weapon will destroy the element blocking the way to the collectible. 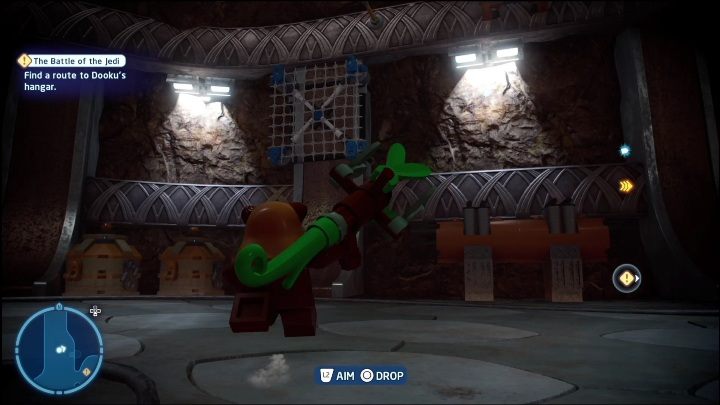 Another character you need is a Scavenger. You have to create a net on the wall that you will be able to climb over. This gadget is unlocked in Episode 6 or 7, depending on which one you do first. 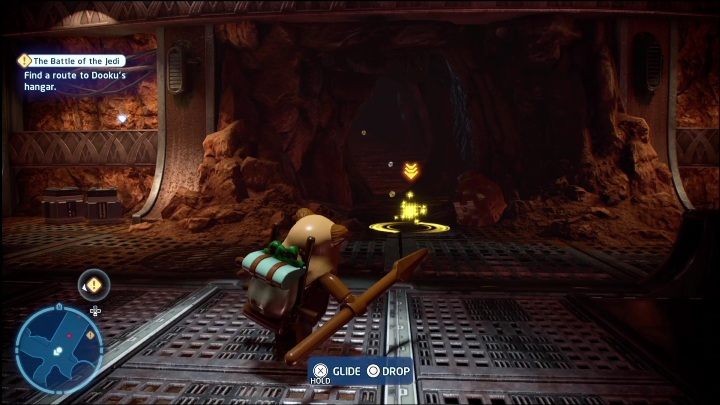 To get the next collectible, go through the dark tunnel. This is where you will find another part of the minikit. 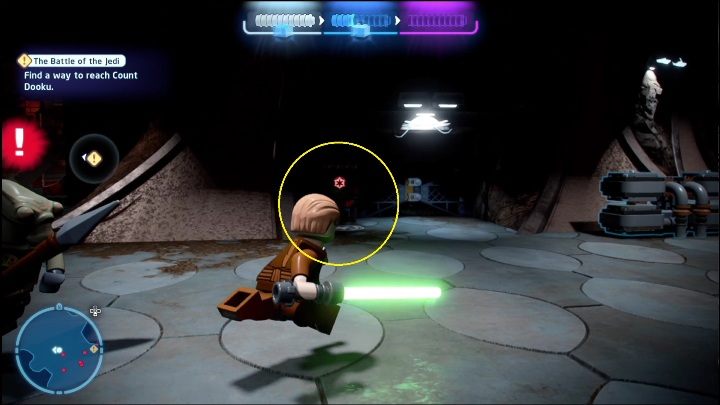 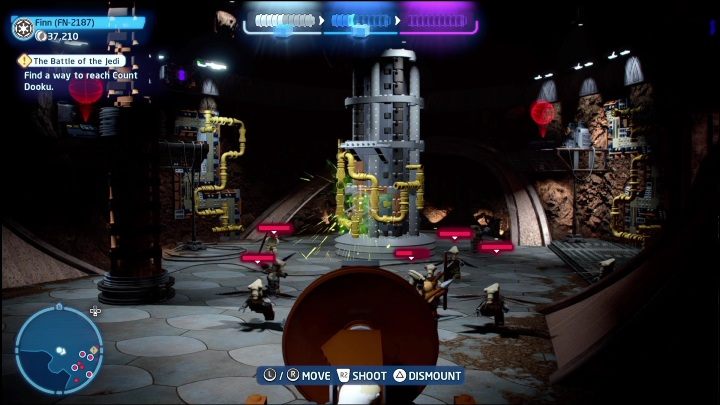