This page of the guide to LEGO Skywalker Sage contains the first part of the walkthrough of Episode 1 (Phantom Menace). Our walkthrough describes the level A Bigger Fish and its accompanying quests. You'll learn how to win the boss fights against the Opee Sea Killer and Colo Claw Fish, as well as how to solve the conference room, yellow barrier and terminal puzzles in Gungan City.

Note - The walkthrough assumes you're playing through episode 1 in Story Mode. It doesn't include secrets or collectibles described on separate pages of the guide. We suggest completing the Story Mode of every episode first before replaying them in Free Play. 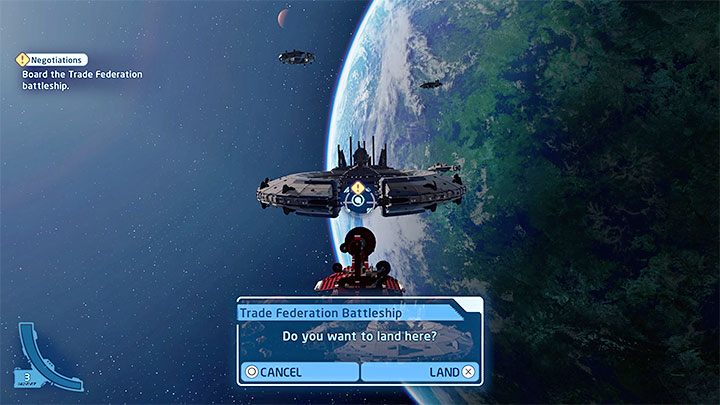 You start the level in outer space, but you don't have to fight anybody or explore anywhere. Your objective is to land on the Trade Federation Battleship. Approach the vessel and confirm that you want to land. 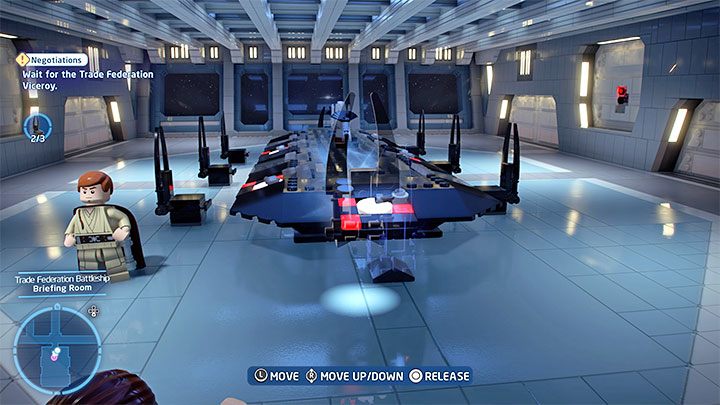 Inside the hangar talk to the TC-14 droid. Follow it.

You'll reach the conference room, although the planned meeting will not happen. You must progress with the story yourself. There's a small puzzle here you must solve using the Force. Grab the overturned chairs found all around the room and move them near the table, placing them back in their intended spots. 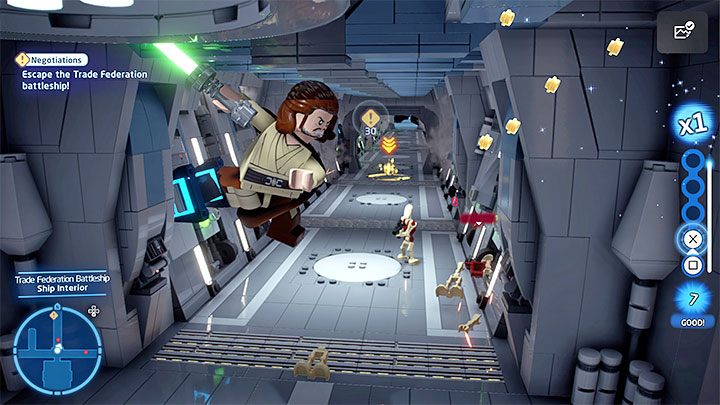 This triggers an escape sequence during which you'll be forced to fight enemy droids. The game will teach the basics of combat here - make sure you learn how to deflect projectiles with your lightsaber and how to throw it at the enemies. 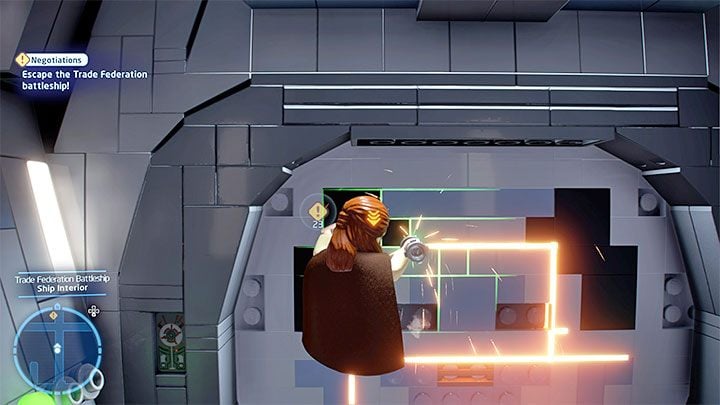 While escaping you can choose any corridors you'ld like, but regardless of the route taken you'll have to cut a wall open with your lightsaber. Stand by the wall and interact with it, then cut out a rectangle shape - the wall will fall, opening the way forward. 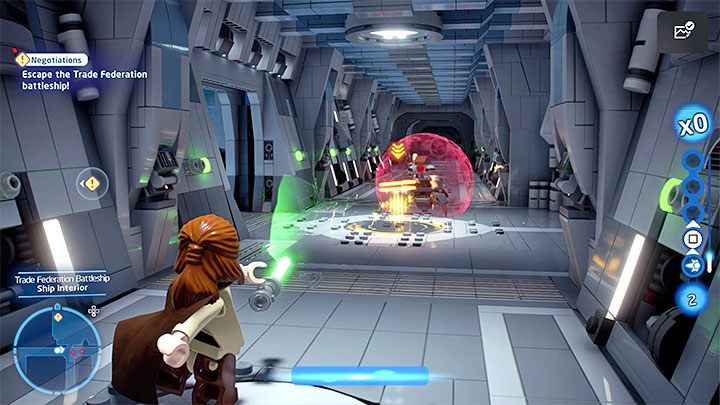 In addition to regular droids you'll also encounter droids surrounded with forcefields. Deflecting their shots with your lightsaber will destroy the forcefield, making them vulnerable to your attacks.

Your objective is to reach the hangar. There you'll find the first blue circle - enter it to advance to the next part of the episode. 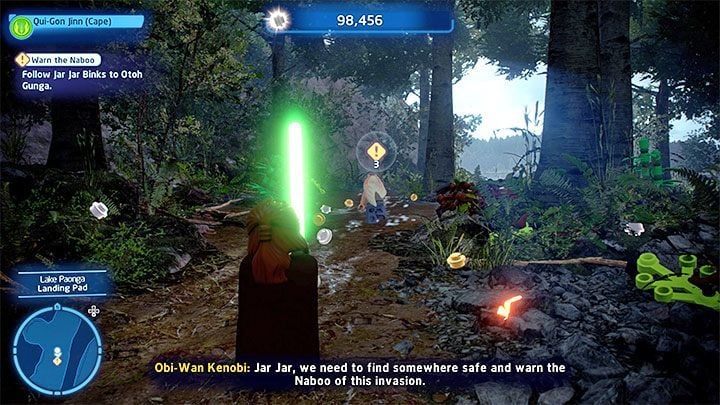 Once you arrive at Lake Paonga, talk to Jar Jar. Follow him to Otoh Gunga. Approaching the lake will trigger a cutscene showing your journey to the underwater Gungan City. 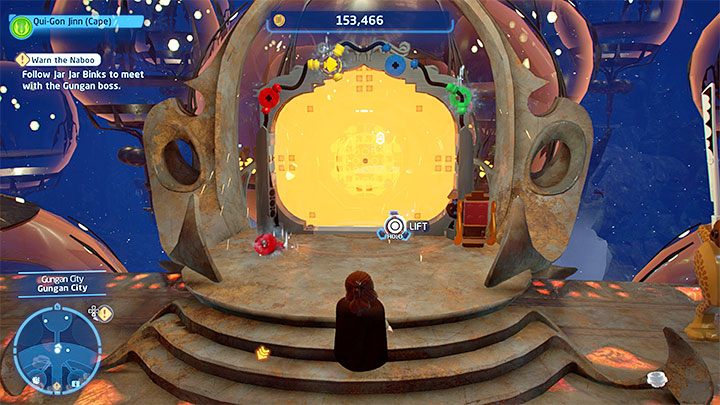 The city is the first major location visited during this episode, but you don't need to explore it during Story Mode. Follow Jar Jar to the meeting place with the Gungan Boss.

Pictured above is a puzzle requiring you to remove a yellow barrier you must solve with the Force. Use the Force to grab interactive objects and place them in the slots above. The colors must match - insert a red object into the red slot and a blue object into the blue slot. Then press the button. You'll reach a blue circle you can use to reach the meeting place. 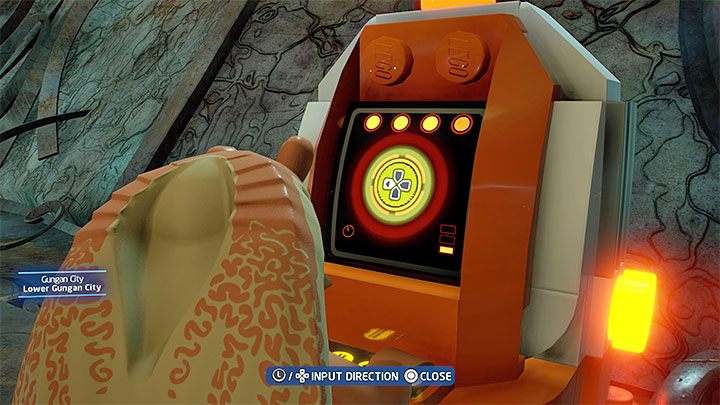 Now you must head to the docks. There's another terminal puzzle there. Switch to Jar Jar, as he's the only one able to use the terminal. The puzzle itself is simple - press the buttons appearing on the screen at the right moments. Reach the blue circle to start the level A Bigger Fish.

Additional note - Challenges can be completed either in Story Mode or in Free Play. They're initially hidden but our list will let you discover them without the need to buy rumors.

The entire level tasks you with escaping from giant sea monsters. 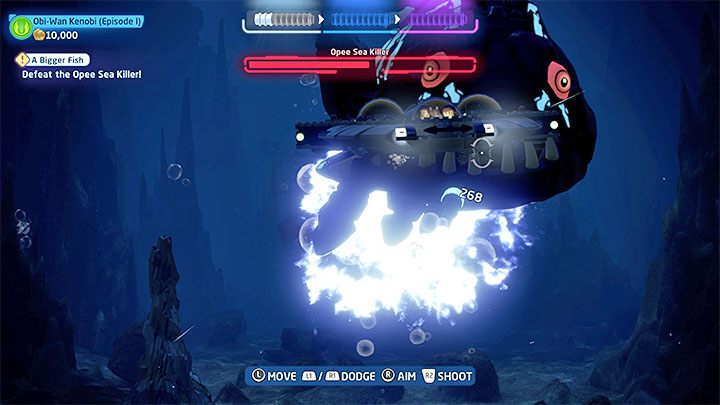 The entire level tasks you with escaping from giant sea monsters. The first boss of the level is the Opee Sea Killer. Soon after the escape sequence begins you'll be able to fire at the giant creature and deplete its health bar. 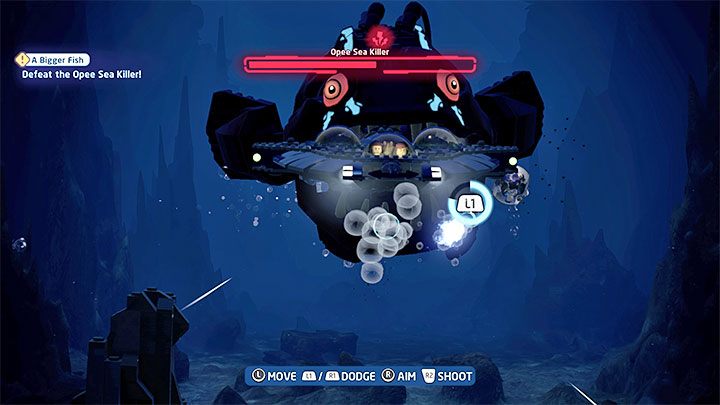 During the fight you must dodge either to the left or to the right. Wait for the appropriate icons to appear on the screen, then press the buttons (L1/LB and R1/RB) in time to avoid taking damage.

The escape sequence will automatically end once your foe gets caught by the titular bigger fish. 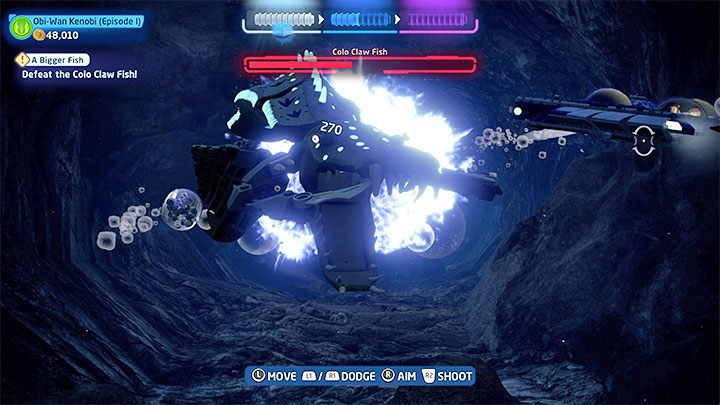 After a short while the second boss, the Colo Claw Fish, will appear. The strategy remains unchanged, keep firing at the boss and press the dodge buttons as soon as they appear on the screen. The second confrontation will also end prematurely, completing the level.