This page of the LEGO Star Wars The Skywalker Saga guide has tips for various aspects of the game. We have addressed all gameplay elements that may be unclear in the initial stages and those that have been illogically explained by the game. 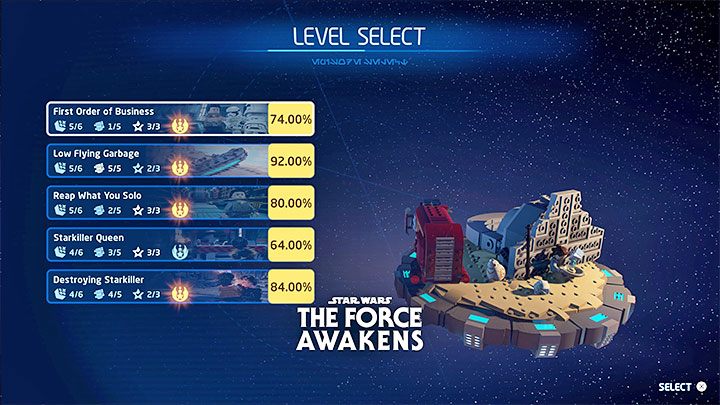 LEGO Star Wars Skywalker Saga has 45 story missions (levels) from 9 Episodes. We strongly advise you to complete them all once and ignore the optional activities of the game until later. There are several reasons for doing this:

We have included all the story mode missions in our walkthrough. Descriptions of boss fights from the main storyline can be found in a separate chapter.

You can't explore 100% of the locations you visit right away 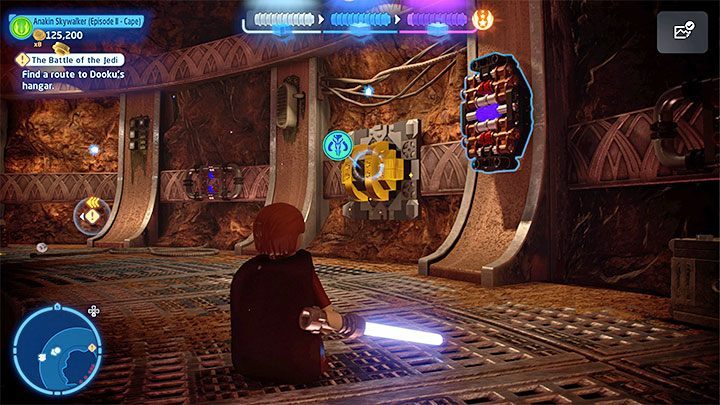 In Skywalker Saga, just like in other titles from the LEGO series, you have to remember that you can't look everywhere immediately. This means that you also cannot get all secrets right away. Fortunately, you can find collectibles or, for example, entrances to buildings on the map - you don't have to remember their locations. You can return to them after meeting their requirements. What's more, you can view the secrets statistics and optional activities from a given location on the pause or map screen to see how much you are still missing to get 100% completion.

There are two things preventing you from fully exploring a given location:

Spend all your studs on stud multipliers 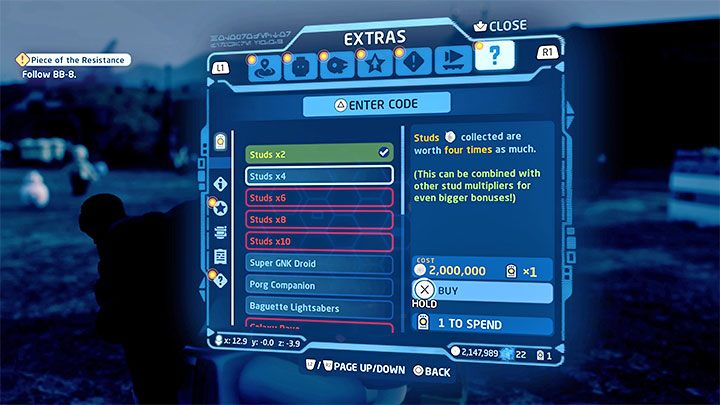 In LEGO Skywalker Saga, as in previous productions in this series, you can and should unlock stud multipliers even more of them (when doing the same activities). Ultimately, this will allow you to accumulate billions of studs, thanks to which you will be able to afford any purchases. Try to avoid other unnecessary purchases until you got at least the first 3 multipliers.

Datacards, one of the types of collectibles, are associated with multipliers, but you only need to find a few of them, not all. When you have at least 1 datacard and the required amount of studs, go to the Extras menu and purchase the multiplier. We advise you to unlock the x2, x4 and x6 multipliers as soon as possible. Don't forget to get the other ones later. Multipliers will also make it easier for you to get the True Jedi status in story missions.

We have covered collecting studs and using multipliers in more detail on the Studs - how to get more? page. 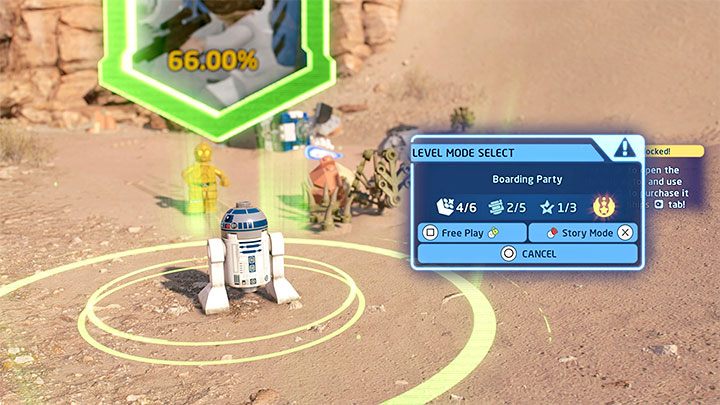 As mentioned before, completing each level in Story Mode will unlock it in Free Play. You should always choose the latter if you want to replay a given stage. The heroes in the story mode are predetermined. These are the heroes related to the main storyline. 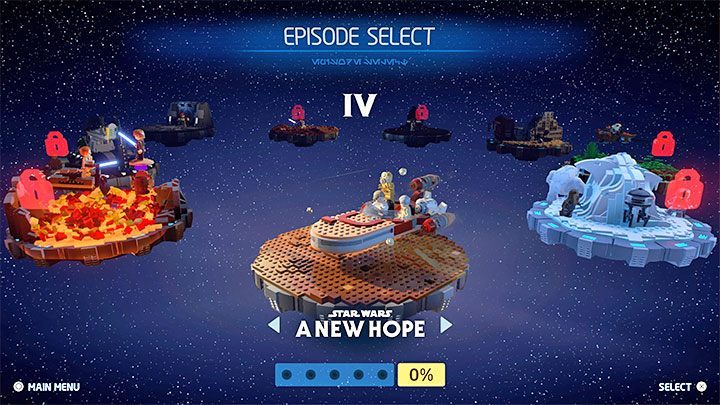 The plot of the game covers all 9 Episodes of Star Wars, but there is no obligation to complete them in chronological order, i.e. starting with Episode 1 The Phantom Menace and ending with Episode 9 The Rise of Skywalker.

You can choose your own order of completing the Episodes, although there is a slight limitation - you have to complete the episodes from a given trilogy (1-3, 4-6, 7-9) one after another. For example, you can't do Episode 5 (The Empire Strikes Back) right away. First, you will need to complete Episode 4 (A New Hope). You only have to complete 5 story missions of a given Episode, you don't need to do its additional content.

The order of playing the Episodes does not matter much. In each of them, you can unlock useful characters and new locations from the galaxy map that you can later visit in Free Play Mode. It should be noted, however, that the Episodes of the first trilogy (1-3) have slightly less complex stages than those of the later Episodes. The topic of selecting Episodes is described in more detail on a separate page - Episodes chronology - do have to follow it?. 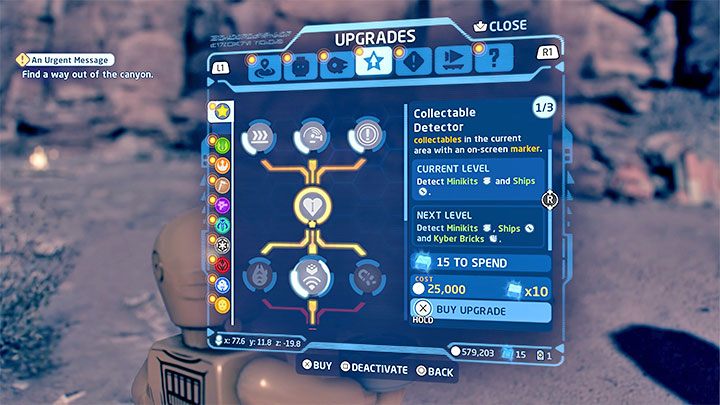 LEGO Skywalker Saga has a huge number of collectibles - there are almost 2,000 of them. All this means that any help in locating them can be very useful, especially upgrades from the Collectable Detector category, which you can buy with Kyber Bricks and studs.

The detector shows circles on the screen that can lead you to the places with secrets. Depending on the purchased detector level, you can find minikits, Kyber Bricks and Datacards. This can be very helpful if you plan to search a location in 100%. It should be noted, however, that the detector only marks the location of the collectibles. You will still have to solve puzzles or use the right characters to get them. You will only avoid having to check every corner since you will know exactly where to look. 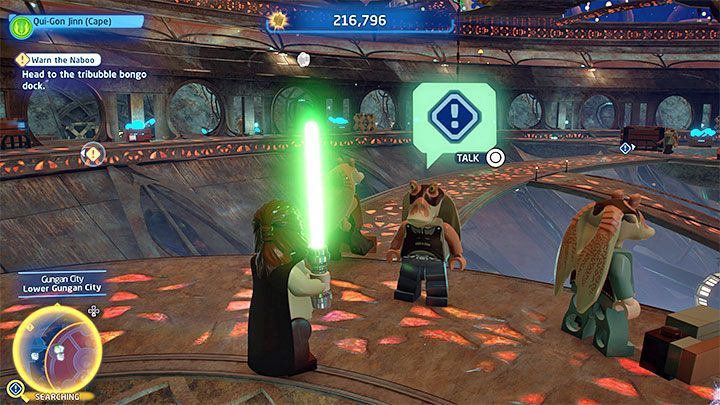 You can come across NPCs with exclamation mark icons in open locations, between the story missions. Exclamation marks can mean two things:

Additional information - There are H1NT droids in the game world, but they only serve to remind you about some mechanics. They have no practical use. You can ignore them - you won't miss anything. 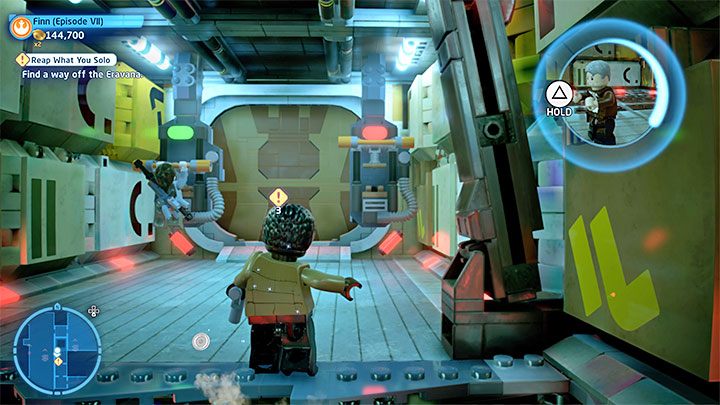 In LEGO Skywalker Saga, you never explore new locations with a single character. In the story mode, you always have at least two playable characters. The Free Play Mode offers even more freedom by freely choosing your hero.

You should remember about switching between available characters, especially in single-player, but this can also be useful when playing in co-op. Switching to another character will allow you to:

In some story stages, this gets even more extensive, because you command two groups of heroes. You then have to switch between groups from different parts of the map so that, for example, group A can help in unlocking the passage for group B. 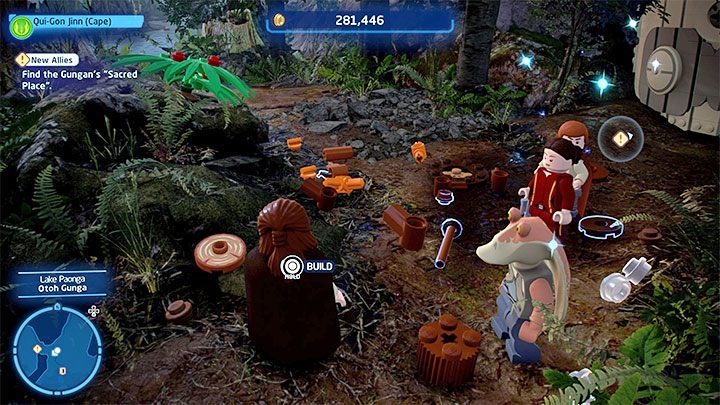 In LEGO Skywalker Saga, you should not limit yourself only to destroying all objects in the environment (collecting studs, unlocking new passages), but also looking for structures you can build. The game marks all places of this type with bouncing blocks - when you approach them, hold down the build button.

By doing this, you can, for example, create terminals that help in solving puzzles or structures that you can climb. It is worth noting here that sometimes you have to destroy something first to get bricks that you can build with. Do not be discouraged if you do not find them in a given location right away. Try to destroy other elements of the environment first and then explore that place again.