Expedition is a completely different game mode in comparison to the traditional, ranking mode. In the latter, you build decks from the cards you already own, so you constantly have to expand your cards collection to create ever stronger decks. In Expedition mode you have to build a deck from all available cards, but in a unique way. 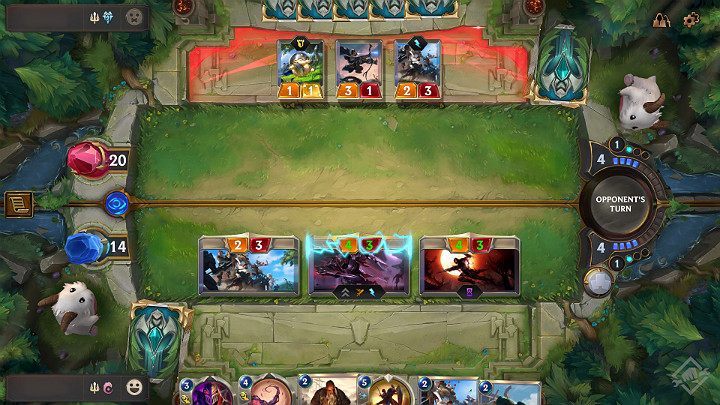 Beginning of the Expedition - entry fee

If you want to try your luck in Expedition mode in Legends of Runeterra, you have to pay an entry fee. You can pay for the challenge with coins (currency available for real money), Shards or by using a special token. 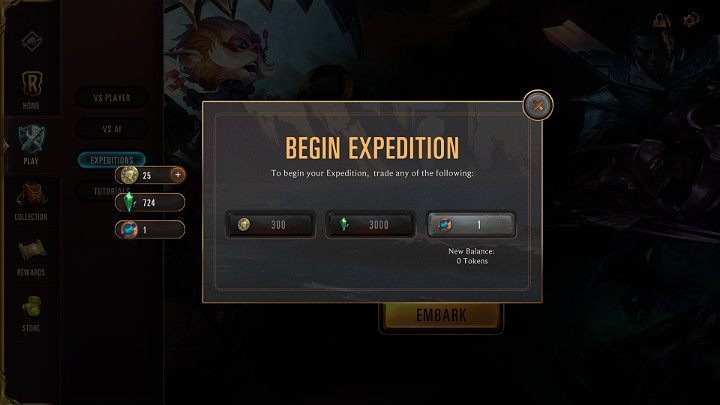 It's possible that in other card games you've encountered Draft or Arena modes, where a player had only one chance to win a reward. Legends of Runeterra has a quite original approach to this mode of play. By paying the entrance fee to Expedition mode, you get the opportunity to play two separate series of games. 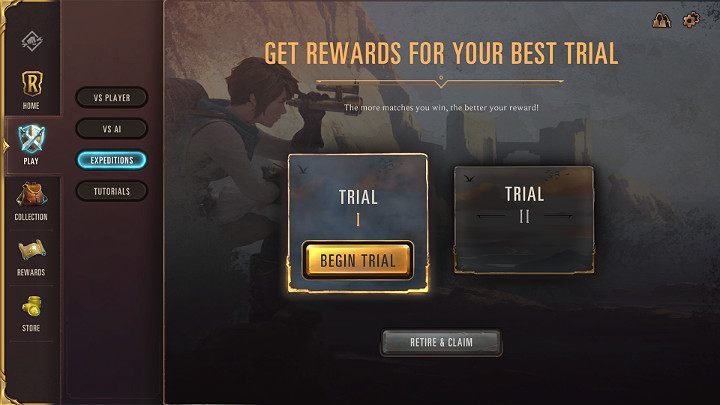 Even if the first approach turns out to be a total disaster, you can try again because the rewards in the Expedition mode are calculated on the basis of the best result. If you wish, you also have the opportunity to give up and end the Expedition. This button is useful when you have won all 7 duels during your first attempt - you can't get a better result so playing the second attempt will only be a waste of time.

Building a deck in Expedition mode

It's time to proceed to the deck building aspects! As we have mentioned earlier, in Expedition mode you build a deck from random cards and then replenish it during several consecutive stages. At each stage of building a deck you will have to decide which set of cards from the 3 possible options is the most suitable for you. 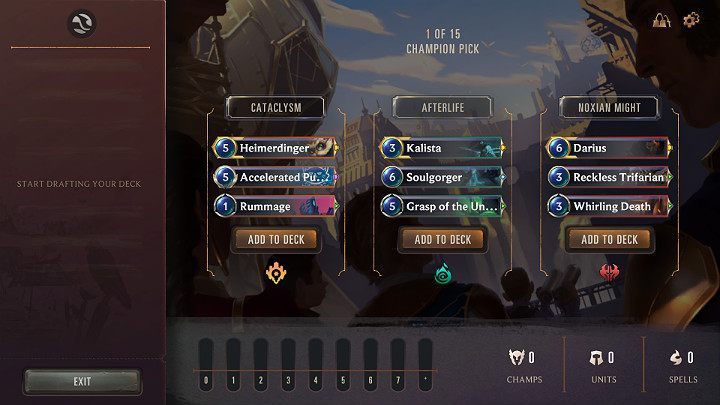 The first two stages of building a deck consist in selecting the appropriate Champions along with 2 other cards that match the specific Region. In the picture above you can see that you can choose between the regions of Noxus (Darius), Shadow Isles (Kalista), Piltover and Zaun (Heimerdinger). By choosing a set, you determine the first region of your deck. At a later stage, you will be able to choose more cards from this Region. 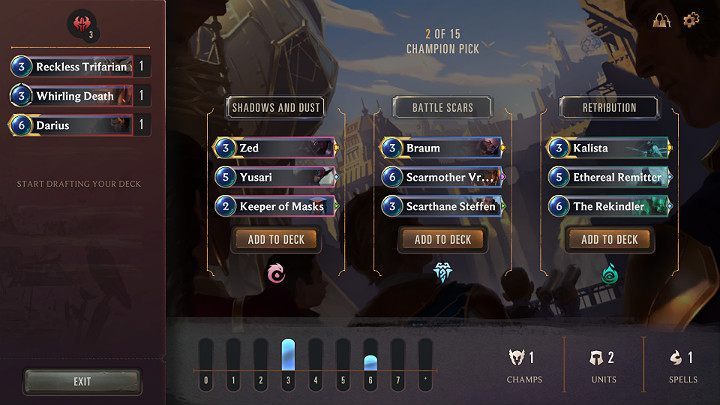 The picture above shows that Darius from the Noxus region was selected to the deck. It's time for another decision to be made - this time you have to add another Champion to your deck. You can choose between Zed of Ionia, Braum of Freljord and Kalista of Shadow Isles. After selecting a second Champion, your next decisions and selection will be limited to rounds called Synergy Pick and Wild Pick. 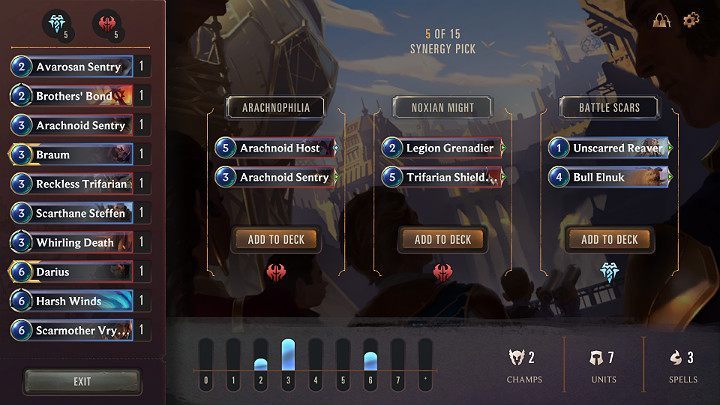 Unlike the Champions' selection rounds, Synergy Pick and Wild Pick are limited to a set of 2 cards. During the Synergy Pick round, you choose between the cards that are best suited to your current deck. 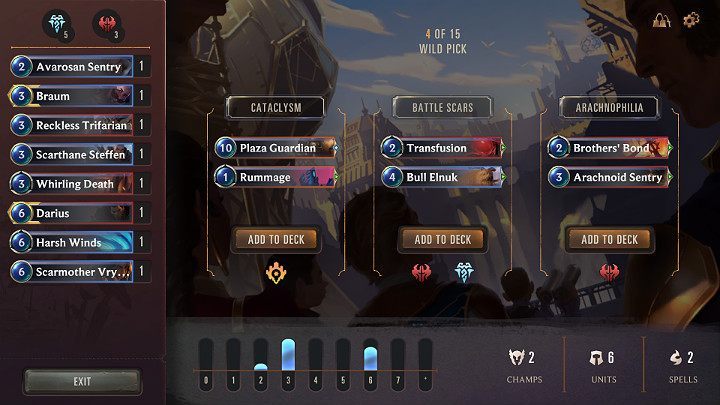 Wild Pick rounds are much less predictable because you can encounter crazy combinations that can drastically change your deck style. During Wild Pick rounds you can create the most interesting and crazy combinations and synergies. The choice between Synergy Pick and Wild Pick lasts until the last step of building a deck. At that moment, you will be able to exchange one card for another. 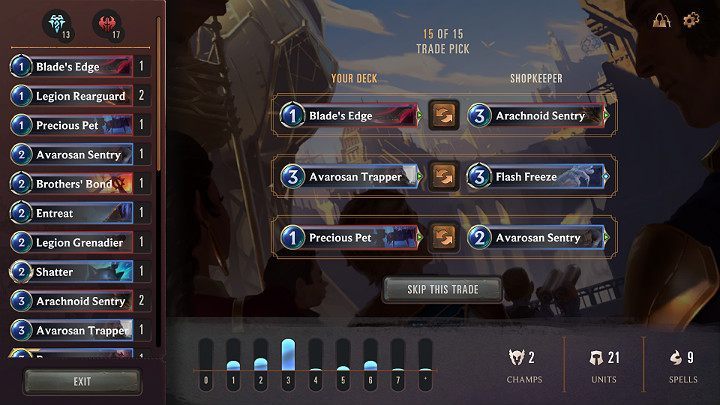 By proceeding to the final step of building your deck in Expedition mode you can finally polish your deck of cards. You can choose from 3 random possibilities which may (but do not have to) positively influence the effect of your work. Choose wisely because you can only choose one option. It is worth noting here that the card exchange feature is optional and if you don't want to do it, just click the "Skip this trade" button.

After building a deck, it's time to finally test it in battle! Each Expedition in Legends of Runeterra lasts until you win 7 matches or lose 2 matches in a row. This means that you'll have a lot more chances to win your way to the top than you might think! 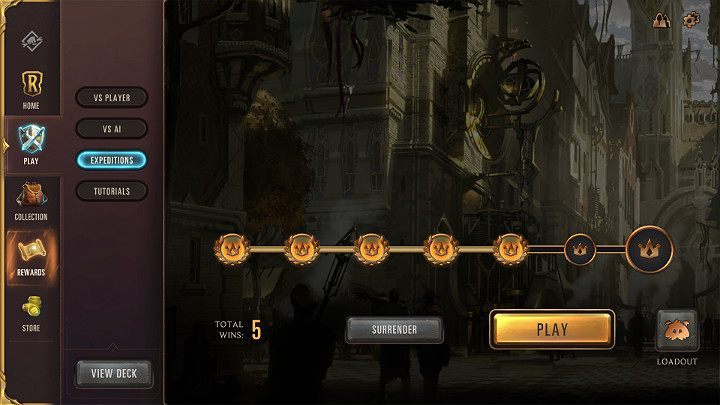 On the horizontal progress line there are seven crowns, and each of them represents one victorious duel. By winning consecutive matches, you make progress in the Expedition mode, which grants you specific rewards. If for some reason you want to give up, you can use the "Surrender" button. As you complete more matches played in the Expedition mode, you will have the opportunity to adjust your deck of cards. For example, if you win your first duel, you will be able to choose another Champion. By winning more duels you will gain access to Trade Picks. 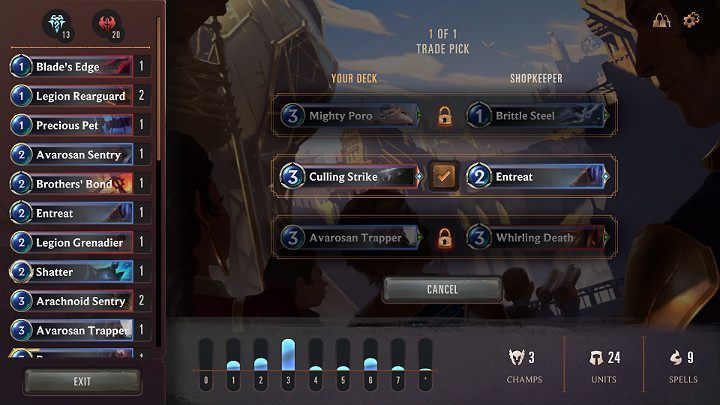 After each victory you can decide whether you want to exchange randomly selected cards from your deck for other cards. It is worth considering these options every time because not all cards in your deck can be played. This allows you to replace cards with other ones that may be more suitable to your style of play.

As mentioned above, a single defeat won't end the entire Expedition! If the opponent turns out to be better and wins the battle, a big red exclamation mark will appear on your Expedition progress line. 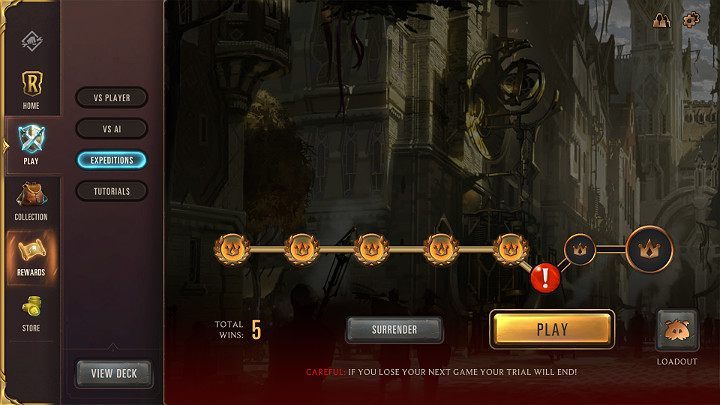 This means that you have to win the next match if you want to continue your adventure in this mode. After you have won the match, you move on to the next stage of the game as if nothing had happened, but if you lose - game over.

If you manage to win 6 out of 7 duels, you will face your final opponent. Once you get to this point, it doesn't matter if you had any failures along the way or had to fight in order to continue participating in the Expedition. 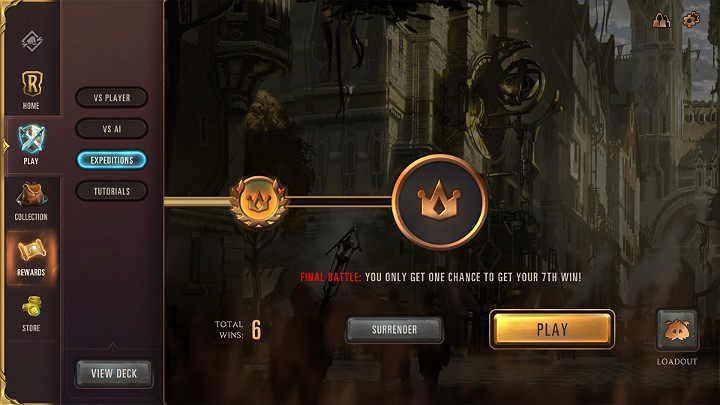 The last, seventh battle is a bit different from the others because you have only one chance to win here. If you manage to win - congratulations! If not, you can try your luck in the second approach.

Let's assume that you didn't manage to win the last fight and your lucky streak has ended after 6 victories. In this case you can proceed to the second attempt or collect your rewards immediately and finish the Expedition. 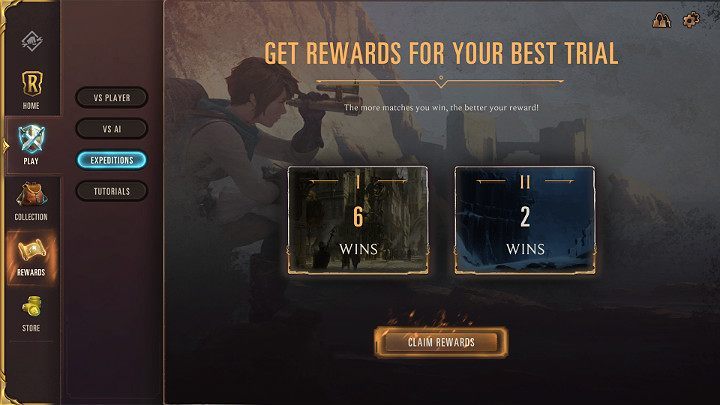 As you can see in the picture above, our first attempt ended with 6 victorious matches and the second one was terrible - only 2 wins. That's how it is when you build decks from random cards - sometimes you get a perfect deck, and sometimes you assemble a deck that's pretty useless. It's time to move on to the rewards!

After completing the second attempt in the Expedition mode, your rewards will be estimated and calculated on the basis of your best score. In the presented example we have won 6 times so it can be considered as a good result. Especially since the first participation in the Expedition is completely free. 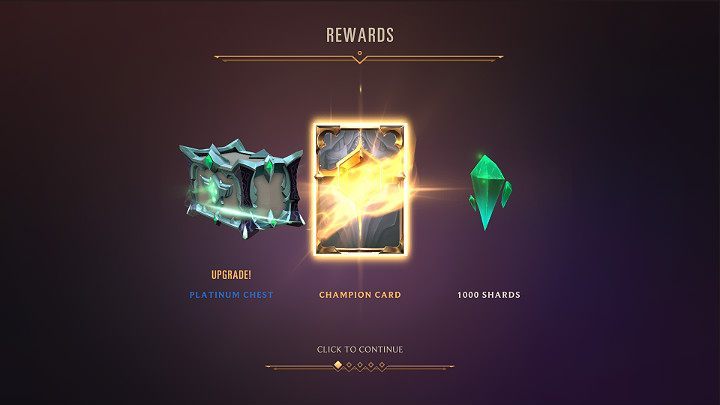 Apart from additional experience points, you can earn the following rewards for winning the Expedition:

It is worth noting that winning 7 duels will grant you 3500 Shards and a Champion's Capsule (you will find 2 random Champions inside). Considering the fact that the entry fee to the Expedition mode costs 3000 Shards, by finishing the Expedition with the best result you can move on to the next one completely for free!