On this page of Layers of Fear 2 guide, we describe the monster escape scene that takes place in the final part of act 1. In addition, we explain what attractions await you after you get back in the cabin of the hero. 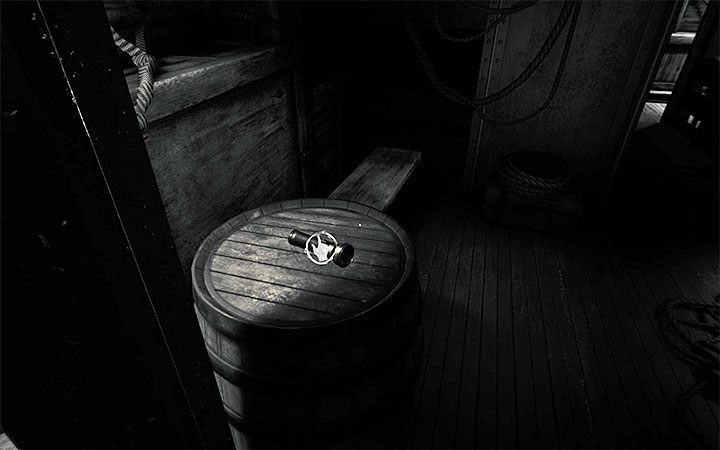 Exit the room where you have decided about shooting the dummies. Walk through the dimly lit corridors. They will get you to a very bright white room. Go to the black fragment of the wall and a new cutscene will launch. After seeing it, you can use a new exit.

Once you find yourself in the new long corridor of the ship, look at the map of the ship. Get down to the lower levels. Along the way, you'll also notice the baby squeezing through the bars. In one of the drawers shopping list was left. Open the metal doors and move on. On the bench, you'll find a note. You'll get to the storage room, where you can see the flashlight. 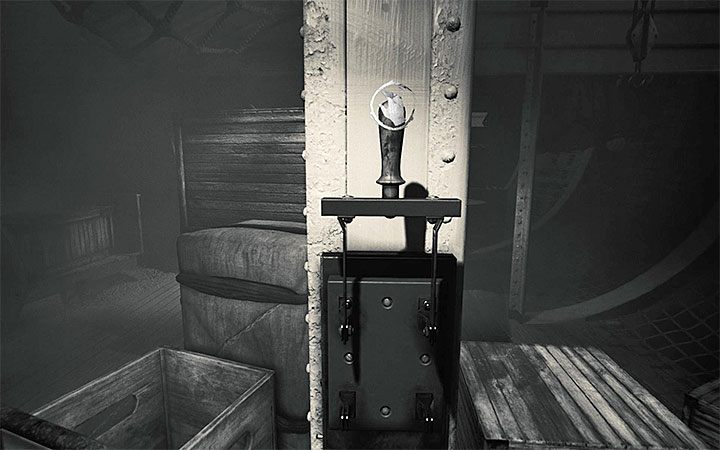 Continue the exploration of the storage. On your way you will encounter a sliding door. It is necessary to "practice" on their rapid opening and closing, because this skill will come handy in a moment.

When you reach the room with a large hanging load pull the lever to get rid of it. Open another door. After entering the new corridor it is recommended to make a backup saves (if you have the opportunity - more on this can be found on the first page of our guide), because a chase scene will begin soon where you can easily die. 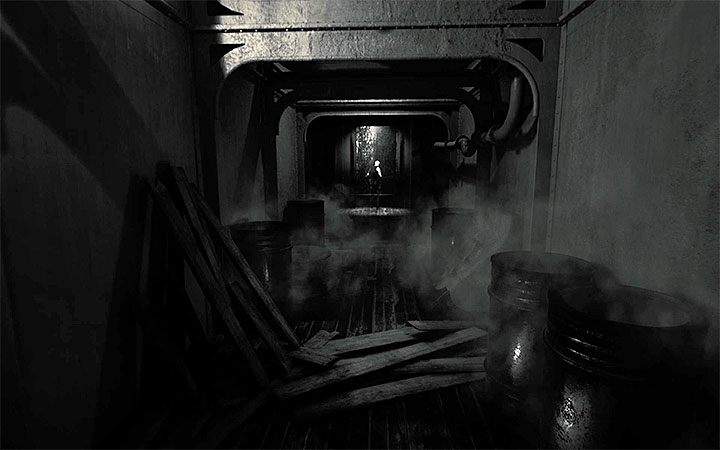 Around the corner you will notice a figure. It looks like it will turn into a monster. You have to run because when you are captured by this monstrosity your hero will automatically die without being able to defend himself before dying. If you die, you will get respawned at the last checkpoint and you have to try again. 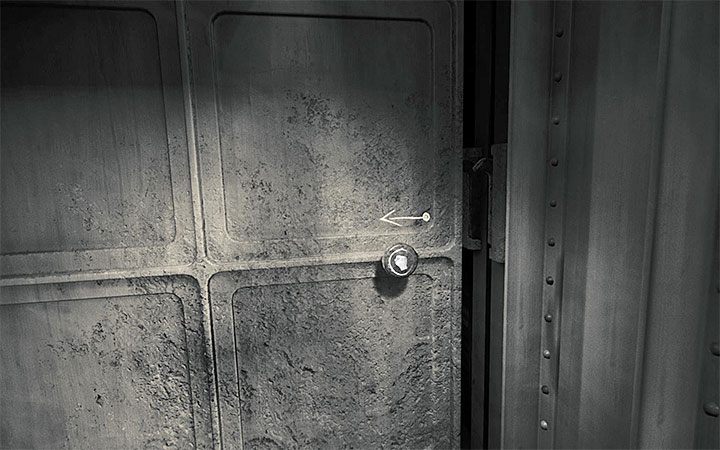 Start running to the storage room from which you came. The key to surviving this escape scene is quickly opening the sliding doors and closing them behind you. Do not miss this second step, otherwise the monster will easily catch up with the hero and the chase will end prematurely. 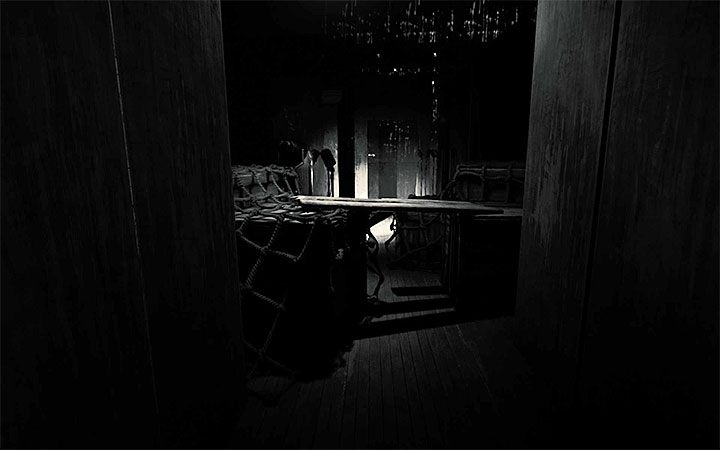 Along the way you will come across a place where you can take a hammer from the table. Keep running and don't forget to close the sliding doors. In the final part of your escape it is also necessary to crouch (image) and squeeze under the boards. 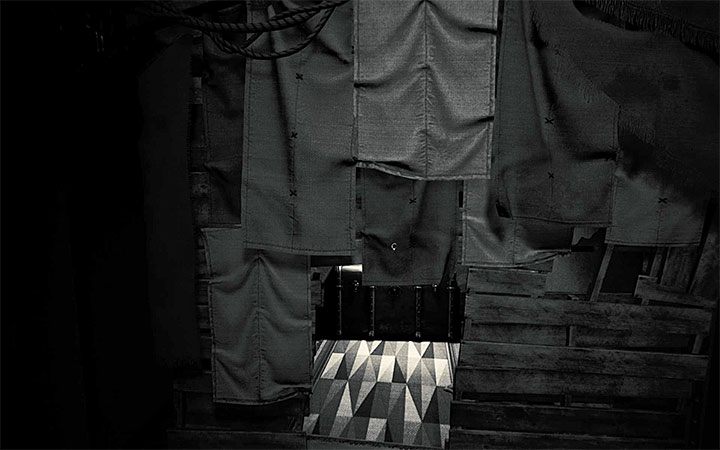 The chase will end in a place shown in the image. Crouch and squeeze through to the cache with a large casket. On the casket there is a movie tape. Soon you will be "moved" to a new place without and B&W filter. Open the metal door and start a new "linear" passage. 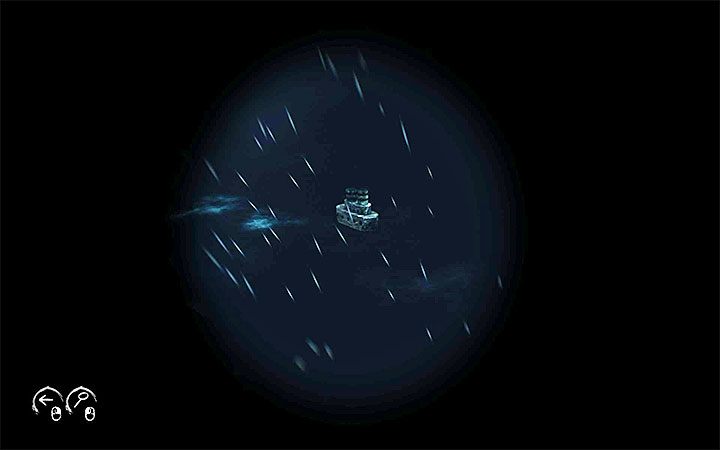 You will return to the hero's cabin that you visited at the very beginning of the game. You can do a few new actions here:

All these actions associated with viewing the newly obtained secrets and the use of a telescope can be performed after you complete the subsequent acts of the game. In particular, we recommend that you keep in mind the telescope. Fish out a new item each time you advance to the next act and return to your quarters. Completing the entire collection of items will be rewarded with the King Fisherman trophy. 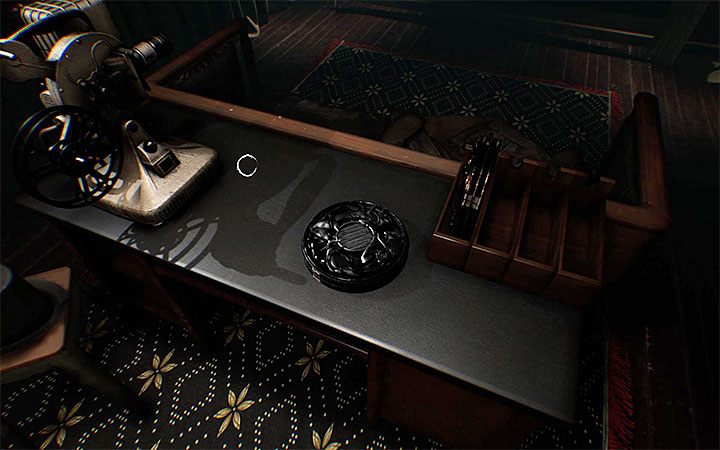 To proceed to Act 2, go to the projector room. Read the new note left on the mirror. Take the film tape you picked up right after the escape from the monster. Install it on the projector and watch the new video. After seeing the movie open the door to get to the new part of the ship.