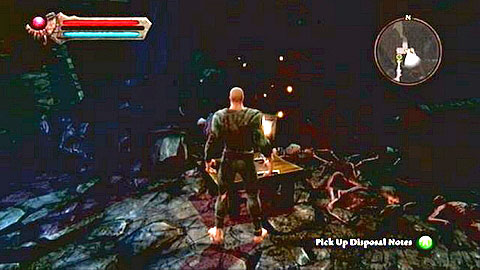 After the initial cutscene ends, head towards the point marked on the map. On your way you can read the note found on the table on the left and search (A) the skeleton in the east (behind the rocks). 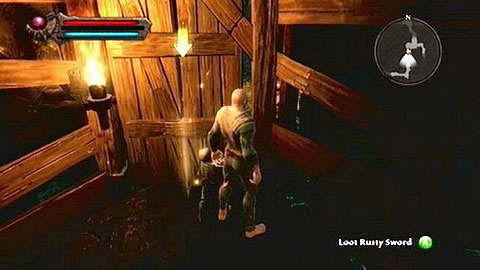 The marker on the map will point you to another corpse, beside which you will find your first weapon - the Rusty Longsword. In order to equip it, press START and head to Inventory->Weapons->Primary to find the sword there. On the right you can also find the item's stats, including its endurance, basic damage and additional attributes. Select the weapon by pressing A. 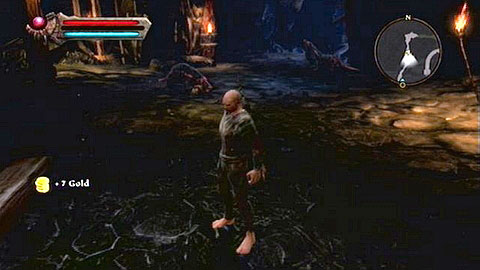 With the door open, run to the other side and keep heading forward. At some point two giant rats will cross your path. You will need to use the recently obtained sword to defeat them. You can attack with your main weapon by pressing X. After the battle, move onwards and remember to destroy the chests and barrels on your way. Sometimes you can find precious coins inside of them. 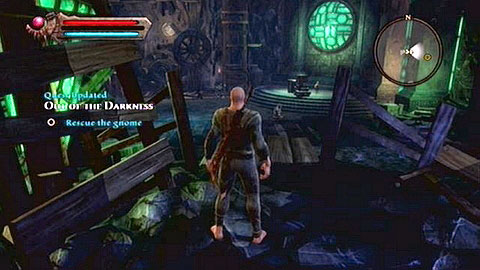 Eventually you should come across a gnome. Jump down by pressing A and defeat the incoming enemies. Throughout the fight, apart from attacking, you should also try dodging the enemy attacks. You can perform them by pressing B and choosing the direction with the left analogue stick. 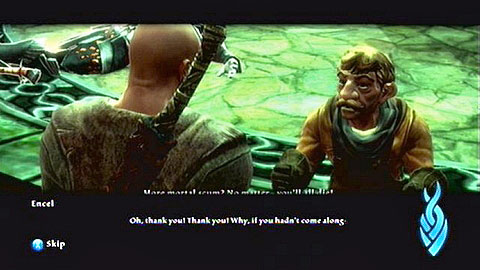 After the battle, speak with the rescued gnome. If you want to get as much information as possible from him, always start by choosing the dialogue options on the left. The options on the right do move the conversation forward, but they rarely have influence on the course or ending of a mission. If such influence does occur, you will find a proper information in the guide. In all other cases, you can freely choose what to say, without having to worry about the end result. 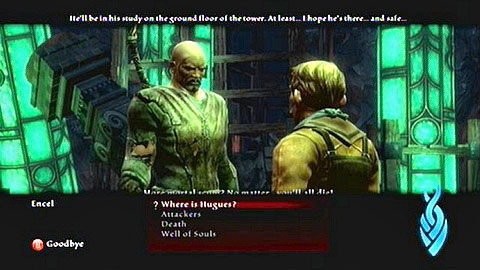 After a short introduction, you will receive three healing potions and the form of the conversation will change. Instead of a circle with answers, there will be a list of important matters. If you want, you can hear about all of them or choose the option at the top and end the conversation (B). Always try listening to what you interlocutor has to say about the matter marked with blue, as it usually contains important information. In this case you will learn the location of the gnome Hugues. 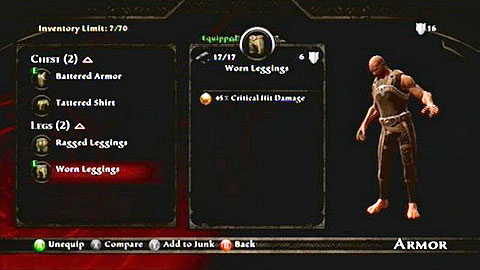 When you're done talking, search the corpses of the defeated Tuatha. Beside them you will find an armour which you can equip by pressing START and choosing Inventory->Armor. The newly obtained items will be marked with a star. You can compare them with the ones you have equipped by pressing X. 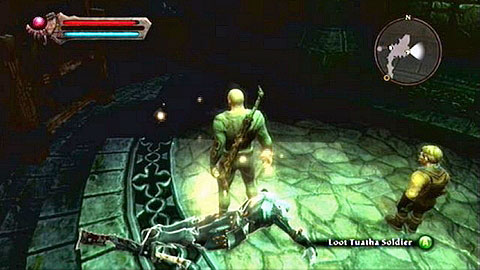 Apart from that, you should also destroy all the boxes in the chamber and open the treasure chest. Its location can be found on the map of the location. Inside of it you can find a useful pair of shoes. 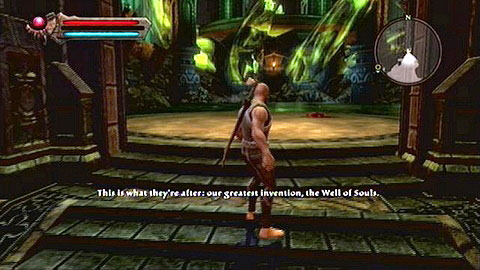 Once you're done searching, run up the nearby stairs and go through the door which will automatically open. After a short animation, keep heading west. 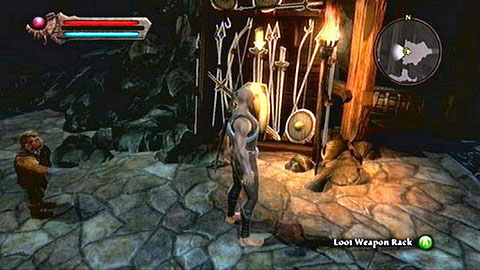 There you will come across yet another gate which you have to open by pulling the lever in front of them. In the chamber on the other side, approach the weapon rack and take the shield. In order to equip it, find it in Armor. Soon afterwards two enemies will arrive. 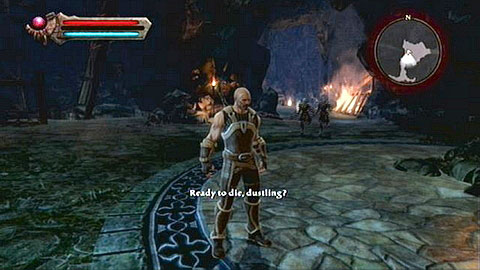 You can use the newly gained item while fighting them. You can block with LT. if you pres it right before getting hit, you will not only block the attack but also push back the enemy. On this stage of the game, a successful block will let you perform lethal blows, so it's good to practice them. 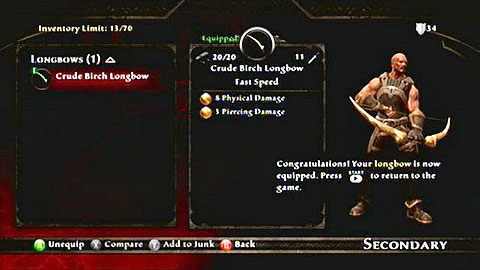 With the enemies dead, pick up the bow found beside the corpse in the south and equip it (Inventory->Weapons->Secondary). You can perform attack with the secondary weapon with Y. Press it and let go after a short while to perform a stronger attack. The amount of arrows is unlimited and the quiver fills up every couple seconds\. 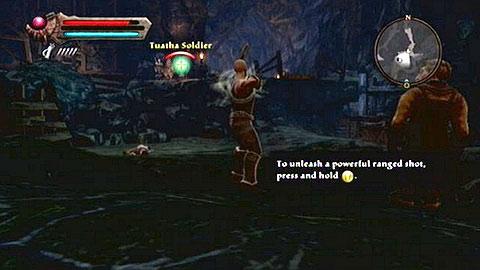 After a short run you will come across another Tuatha group. Kill both enemies using the bow. Do the same with the next one and afterwards pick up the dagger lying in the passage. Equip them and head onwards. 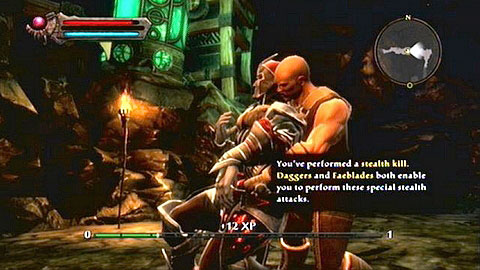 At some point you will receive info about sneaking. In order to enter stealth mode, press RB. You will now be able to approach an enemy from behind and execute him (daggers or faeblades attack button). The eye visible above the enemy informs you whether he sees you or not. If it's empty, you're invisible. If it changes to orange, it means that the enemy is interested in you. Red means that you've been detected. Silently sneak to the nearest enemy and kill him. 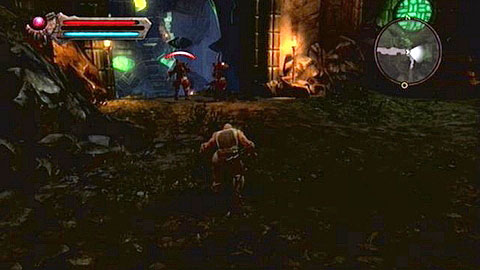 Eliminate one of the archers standing beside similarly and kill the other one conventionally. Behind the door a bit further on, you will see a strange statue in the middle of the chamber. 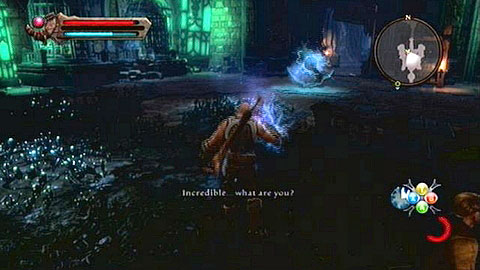 After receiving a proper message, hold down RT and afterwards press X. This way you will use the Storm Bolt, the first of your spells. You will be able to use your other special skills similarly. 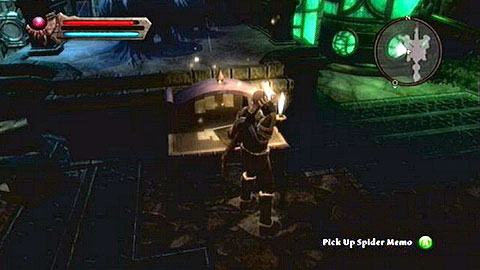 Before moving on, you can read the scroll on the right. It refers to spiders which you will come across in the nearby tunnel. While fighting them, use the Storm Bolt and staff found behind the first monster. 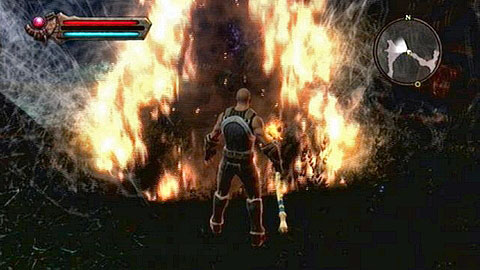 The spiders are very vulnerable to fire, just like their webs which block the passage. Destroy both with the fire staff. 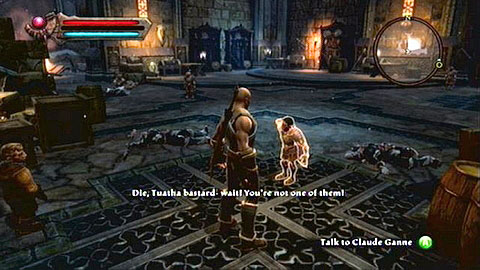 Keep heading onwards (you can hold down A to sprint) and kill more monsters on your way to eventually reach a gnome weaponry. Encel will leave you here, but before saying goodbye or asking about anything, you should choose the green dialogue option. That way you can gain some potions from him. The success rate can be found in the brackets beside the option and depends on your "Persuasion" level. 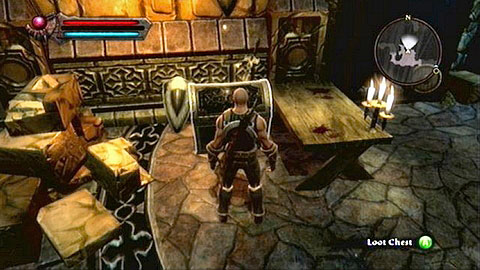 Before leaving the armory, remember about taking the items found inside. Later in the game you will be able to transform them into materials used for creating weapons and armors. 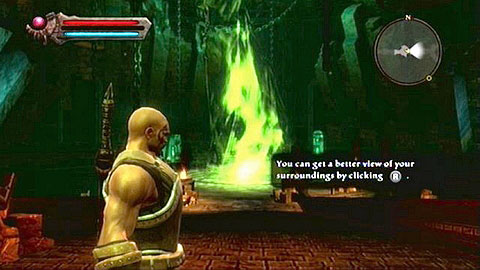 Keep going east and you will reach the Well of Souls. Take a closer look at it by pressing the right analog stick (RS). You can also read the note lying on one of the nearby tables. 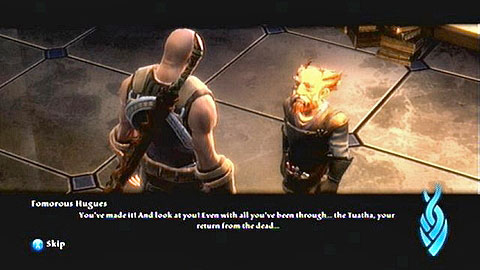 The further road leads through the gate in the south. There you will find the Laboratory M2, where Hugues is waiting for you M2(1). 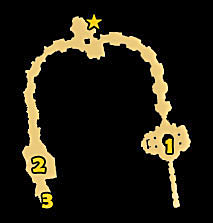 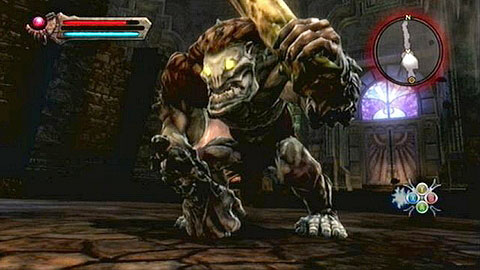 After talking with the old gnome, keep heading onwards while holding down A and killing the Tuatha you come across on your way. At the end of the corridor you will have to fight the Rock Troll. 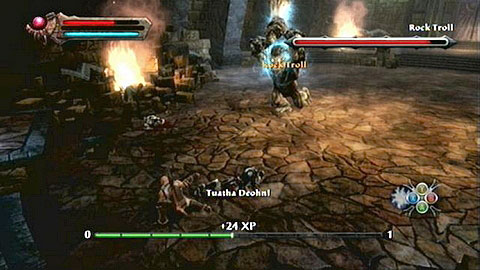 Firstly I'd suggest getting rid of the weaker enemies. With only the Troll left, keep attacking him while dodging sideways (B) when his mace starts glowing blue. Blocks can be effective with some attacks, though not all, therefore it's better to just avoid all of them. 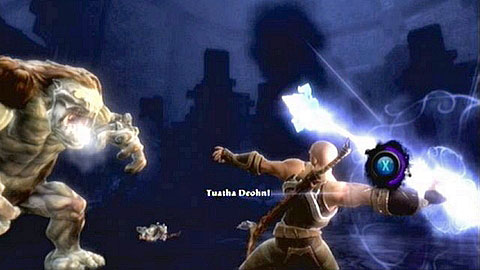 With the enemy's health depleted, approach him and press A. That way you will begin the execution, during which you will have to tap the button displayed on the screen (X). The faster you do it, the more experience points you will gain. After the fight, search monster's corpse and leave the dungeon.