The following Kingdom Hearts 3 guide contains all the information about this newest Square Enix production. In this guide, you'll find about secrets and ways to complete the game 100%.

Our guide is a huge compendium, in which every player will find answers to their question and tips for beginners. It includes information about leveling up Sora, unlocking new abilities, general tips, description of the worlds appearing in the game and boss tactics. We've prepared a complex solution, which describes all activities and will guide you through the story told in Kingdom Hearts 3.

In the next chapter of our guide, you'll learn how to fight with the strongest enemies in the game - no Hartless, Nobody or Unversed will be a problem. Additionally, we've prepared a description of the boss fights waiting for you in the following worlds: San Fransokyo, Toy Box, Monstropolis, Arendelle, Twilight Town, Arendelle, 100 Acre Wood, Olympus, and the Caribbean. In the game, you'll meet many known faces from the Disney movies, like: Jack Sparrow, Winnie the Pooh, Maleficent, Rapunzel or Hercules. With our guide, you won't miss any of them and learn all the secrets.

This guide opens with tips for the beginners in which we've gathered necessary advice to start playing Kingdom Hearts 3. In this section, you'll find out about controls, learn about previous games in the series and which games you can skip. We've also included a full trophy list with commentary helpful e.g. in obtaining the platinum trophy for PS4.

The guide wouldn't be complete without advanced FAQ chapter, which will clear all doubts about the game, for example, can you use fast travel in Kingdom Hears 3, which abilities and keyblades are the best, how to find secret bosses, how to unlock secret ending, how to get the secrets, is Kingdom Hearts 3 the end of Sora's story, and many, many more.

Kingdom Hearts III is another game from the popular jRPG series created by Square Enix. The game's director is Tetsuya Nomura, a veteran of the genre who worked as a producer and character designer on many games from Final Fantasy series and titles such as Parasite Eve and The World Ends with You. Kingdom Hearts III is the culmination of a story that began in 2002 on PlayStation 2. For over ten years, the plot was presented in several titles on different platforms. The series is characterized by arcade combat system and complex universe, combining worlds and characters known from the Walt Disney's productions and the legendary Final Fantasy series. 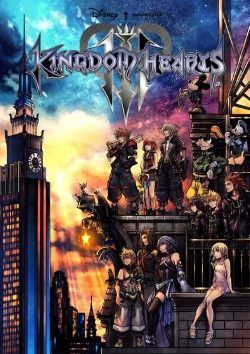 Kingdom Hearts III is another entry in a popular jRPG series from Square-Enix. It has been directed by Tetsuya Nomura, a veteran of this genre, who worked as the creative producer and character designer of many games from the Final Fantasy franchise, as well as Parasite Eve and The World Ends with You. Kingdom Hearts III is a final act in the story started in 2002 on PlayStation 2.

It has been subsequently presented in the following six titles, appearing over the period of 10 years, on various platforms, confusing many fans. Productions from this series are characterized by fast and arcade battle system, along with unique and complex mythology combining universes of Disney movies with TV dramas and Final Fantasy series.

The game uses the battle system of its predecessor. We observe the world from the third person perspective. During fights with enemies, we can jump, dodge attacks and use magic and special abilities. We also get support from our two allies, each given unique set of skills.