Make sure that both BTRs have been disabled. Pick up a new rocket launcher and try to memorize where to find other weapons of this kind. An enemy gunship will arrive here in a short while. I wouldn't recommend attacking it right away. Instead, wait for a new mission objective to be displayed on your screen. You will also have to find a good cover for Lynch, because he can't help you here and otherwise you'd probably lose him. 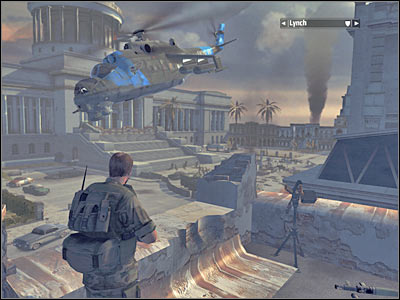 New objective: Take Out The Hind

You will have to be ready since the beginning, because even the first attack of the gunship will be extremely powerful. The pilot will probably use missiles against you, so make sure you're using a good cover to avoid injuries. Try and hit the gunship at least once (screen). You will also have to make sure that you have a fully loaded rocket launcher at your disposal. The gunship will probably attack you twice, so you'll have plenty of opportunities to damage it with more missiles. 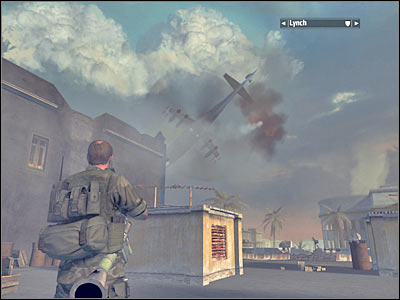 Don't forget about taking care of Lynch. Look at the screen - this seems to be the best possible hideout for him. I wouldn't recommend trying to give him a rocket launcher. You will also have to deal with a single sniper. He will appear on a roof of a nearby building. Wait for the helicopter to get back here. 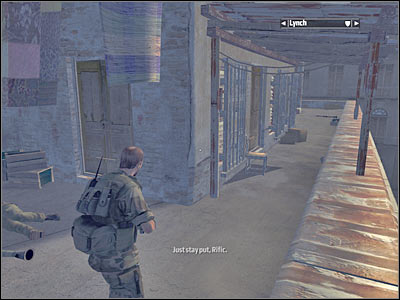 The pilot will probably try a more direct approach. As a result, the helicopter will be hovering near your roof. I'd strongly recommend that you hide, because you will have to avoid being shattered by a powerful machine gun. Remember to have a rocket launcher ready to fire. If you have used up all available launchers, switch to a heavy machine gun. 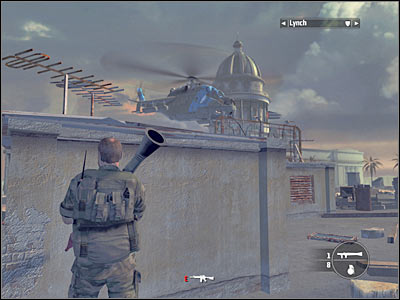 You will have to continue attacking the gunship until the pilot loses control over it (screen) and crashes. Remember to check Lynch's whereabouts from time to time, because he's dumb enough to leave his cover. Sadly, AI can't considered to be one of the stronger aspects of this game. 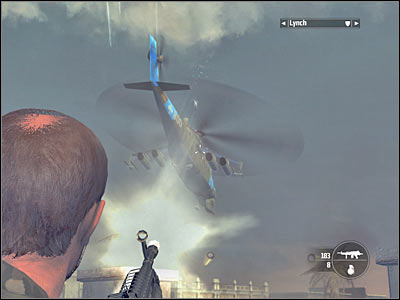 Now you will have to act quickly in order to increase your chances for taking control over the presidential palace without having to risk too much. Pick up a standard machine gun, because you'll want a more precise weapon. Approach the edge of the roof and look for a place to rappel down. Use the rope and slide down as soon as possible. Make sure that Lynch is following your lead on this one. 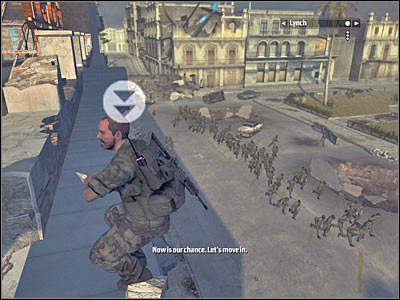 Don't follow the crowd, because you would have ended up under heavy fire from enemy soldiers. Instead, go to your right. You will have to take out an enemy equipped with a rocket launcher. It's very important that he dies quickly and before he's able to counterattack. 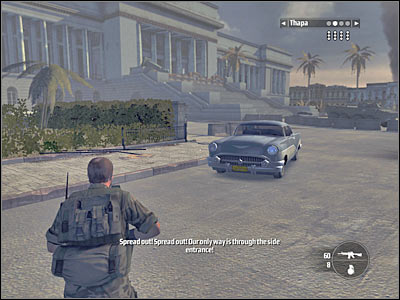