Now you will have to find a good cover in order to avoid being targeted by the helicopter, however you must still be able to attack it. Look at the screen, because that's where you'll be able to hide. Now you will have to wait for the gunship to get here. Use a weapon (preferably a heavy machine gun) to damage it. If you've done everything according to the plan, the gunship should finally leave this area, allowing you to proceed with the next part of the plan. 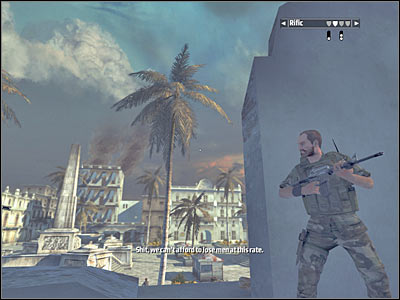 Make sure that you're standing somewhere to your left. You will have to move the allied units towards the square. Remember that you can issue orders to them from a larger distance. Look at my screen - it's the safest path for them. Your allies will probably come across only a few soldiers along the way, but they should be able to kill anyone who gets closer to them. 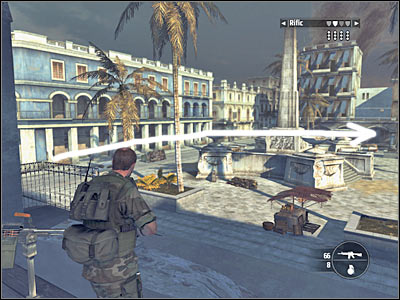 Now it's going to get even more difficult. Try ordering your men to hide behind one of the smaller huts (screen). As a result, a large group of enemy soldiers will arrive at the square. Order your teams to retreat. This has to be done IMMEDIATELY, before they suffer major injuries. Your team members should go back to the armored vehicle. Don't leave this balcony. Instead, wait for enemy units to show up. 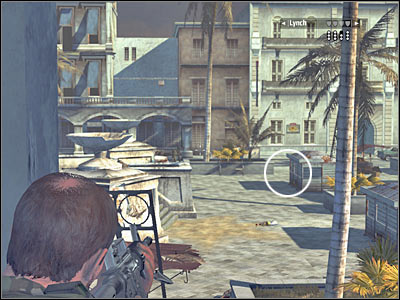 Now you will have to start shooting at the enemy soldiers. Kill anyone who's close enough to die. It's not going to be easy, because there's a lot of them out there. You will also have to lean out only for a short period of time. Additionally, observe nearby staircases, because someone may decide to pay you an unwanted visit. Don't let any of the soldiers surprise you. 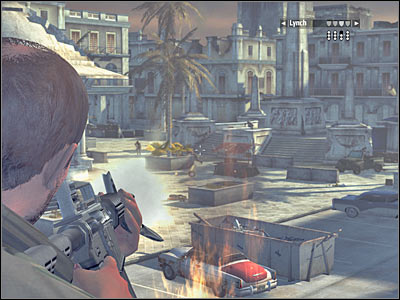 Alternatively you could go back to your allies and assault enemy positions from there (screen). I have to warn you, though. Going back to your colleagues would be very risky, especially near the stairs. As a result, it would be better to stay here, even if it means killing enemy soldiers one at a time. 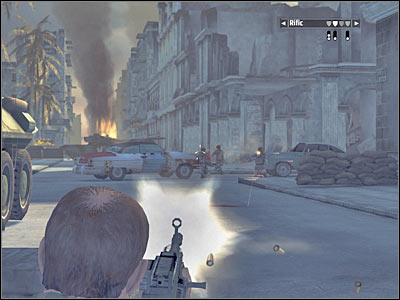 Eventually you will have to secure this entire area. Once you've killed all visible soldiers, order your team members to go back to some of the nearby huts (screen). It would be a good idea to join them. Use the stairs and start moving towards them. 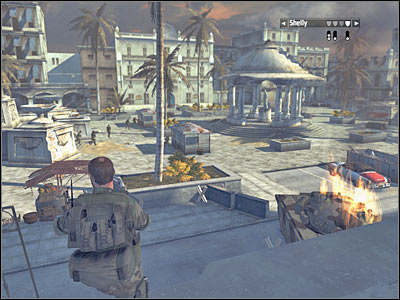