Order the vaultbreaker to follow your lead and start moving back to the highest floor. You'll probably encounter a larger group there, however security guards aren't heavily equipped, so they will die quickly. Proceed towards the right door. You weren't able to use it before, but now it'll lead you to a new area of the bank. That's where you'll be able to find Lynch. 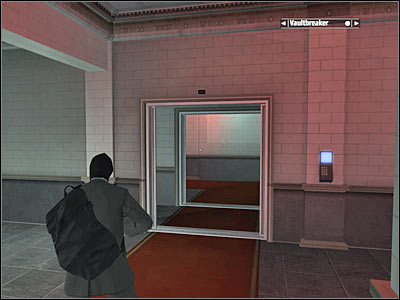 New objective: Clear The Way For The Driver

Once you've arrived at the main area of the bank, you will have to witness a very unusual event. Lynch is currently killing some of the hostages. Don't worry about that. Your main concern will be leaving the bank safely. You will have to defend this area until a van can pick you up. There are some grenades here. Pick them up (screen). 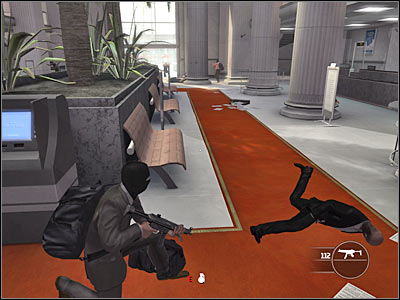 Start off by giving a few orders to your teammates. It would be a good idea to allow them to position themselves to the left and to the right of the main exit. Make sure that they aren't standing too close to the main door, because there are enemy snipers and SWAT units outside. Approach the exit carefully. There are some passageways nearby (screen) if you want to get closer to the central area of the lobby. 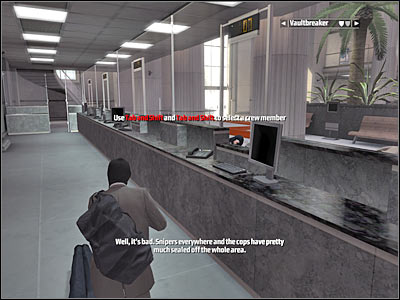 Your first task here will be to secure the inside of the bank (check the upper balconies!). Some of the enemy units will also try and enter this area. Make sure that you've killed all of them. Otherwise they may surprise you later on during the course of this mission. 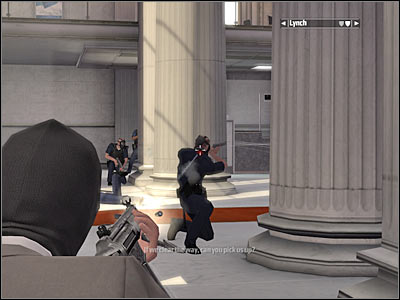 Once you've secured the bank, order your men to hide somewhere near the pillars. You should also be standing there. Keep firing at enemy units. You will have to be careful, though. Once you've noticed a sniper icon on your HUD (screen), move back before you'll lose your life. Seeing this icon means that an enemy sniper can take you out. Obviously you can't let him hit you, because that would be equal to an instant death. 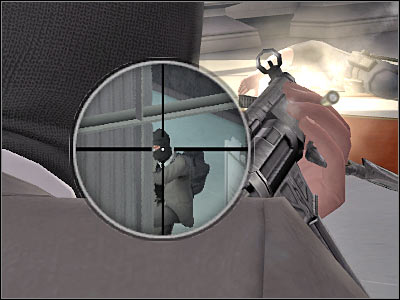 Try moving even closer to the exit. You will have to start shooting at the nearest police officers. They will be hiding behind cars (screen). It's very important to kill them. Otherwise your escape vehicle wouldn't be able to get here. Move back each time you notice a sniper has your character in his sight. Your men should stay behind some of the nearby pillars. You could also order them to move towards the stairs, so they'll take out anyone who manages to get there. 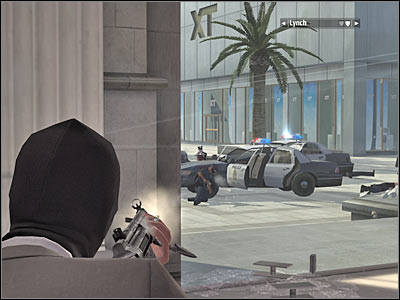 New objective: Get In The Van

You will have to kill a lot of police officers in order to allow an escape van to get here. The van will brake through the main entrance (screen). Order your men to follow your lead and start running towards the back of the truck. Once you're there, press the E key in order to take a seat inside. Watch out only for enemy snipers and ignore rest of the enemy units. Get ready for the next mission of the game. 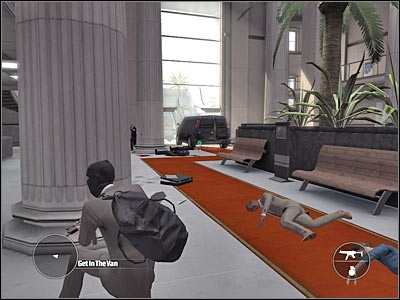