The first task of this mission will require you to team up with your new ally. The vaultbreaker will help you to achieve your main goal. You can find him near the bank. Proceed to the lower level, because that's where you'll have to look for him. Turn around and start moving towards a van (screen). He should automatically exit the vehicle. Once you're close enough to him, a short cut-scene is going to be displayed on your screen. 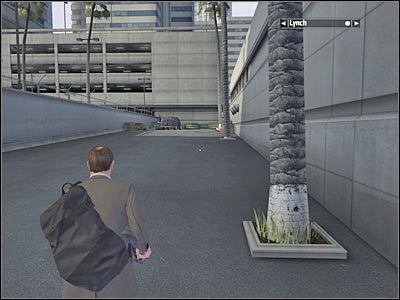 New objective: Get The Gas Into The Air Supply

Your main task here will be to reach the roof of the bank in order to be able to find an air supply unit. As you've probably noticed, you can issue orders to both Lynch as well as the vaultbreaker. You can switch between them by pressing the TAB key. I would recommend ordering them to stay here, because you'll have to perform some stealth maneuvers in order to get to the bank without raising an alarm. Start off by climbing on top of a nearby container (screen). 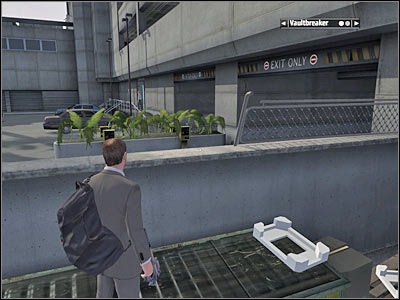 You should be crouching here, so you'll stay out of sight and you won't make too much noise. You'll probably notice that an enemy guard is standing near the back entrance. You will have to get closer to him. The easiest way to do that would be to jump over the plants (screen). Wait for him to look the other way. 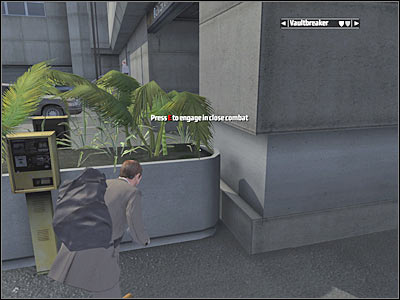 Now you will have to start moving towards him. Stay close to the wall in order to avoid being spotted by him. Approach the guard quickly and press the E key in order to neutralize him. This is all going to be executed automatically. It's not over yet, so you can't stay here forever. 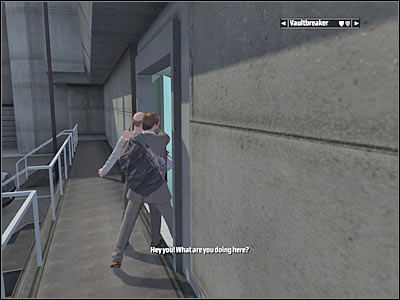 You will have to enter this building right away, because a nearby corridor is being guarded by a second guard. You must take him out as well. Don't use your gun, because this would result in raising an alarm. Instead, run over to him and press the E key to knock him unconscious. Thankfully, he won't use his gun to kill you. Order your team members to get here. 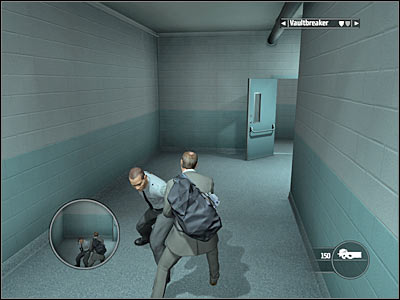 You may finally proceed towards the upper floors. There's a staircase nearby (screen), so you can't get lost. You are going to be rewarded with a short cut-scene. There's a third opponent in this area, so you should order your men to move back a little. They must wait for you there. 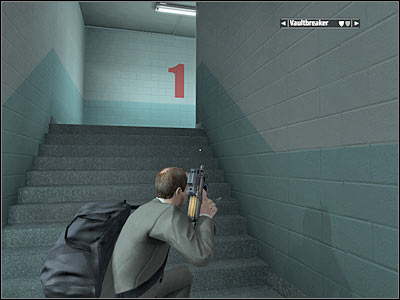 The easiest way to get rid of this guard would be to allow him to get here. You can't approach him earlier, because he won't hesitate to use his gun. Thankfully, a sound of a gunshot wouldn't raise any alarms, because other security guards are already neutralized. Either way, you will have to eliminate him (screen) with a melee move. Order your teammates to follow you to the highest floor. 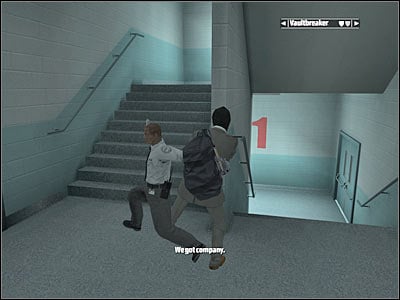