New objective: Pick Up Weapon In The Trunk

Like I've already mentioned, you should consider treating this mission as an interesting tutorial section. Your first objective will be to approach a car. Your main character should automatically pick up a new weapon. 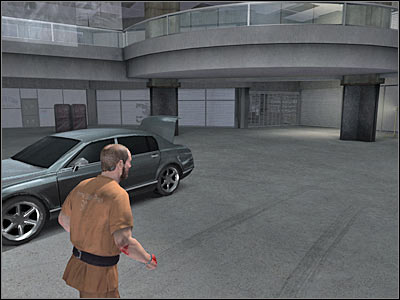 New objective: Give Lynch The Shotgun

Now you will have to give this new weapon to Lynch. Make sure that you've read all hints, so you'll know what to do. Start off by pressing the middle mouse button. Now you must press the W key twice in order to move the shotgun icon to the outer circle (screen). As a result, your new ally will automatically start using this weapon. 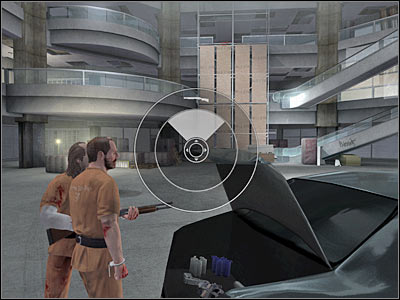 New objective: Pick Up The P900 From The Trunk

This is going to be Kane's weapon, so you must only press the E key in order to take it.

New objective: Pick Up The Magnum Handgun From The Trunk

Start off by pressing the E key. Make sure that you're standing next to the trunk.

This is going to be a very similar task to one of the previous objectives. Press and hold the middle mouse button. After that, press the S key twice (screen).

New objective: Pick Up The SLP Handgun From The Trunk

Once again, you will only have to press the E key, because this is also a weapon designed for Kane. 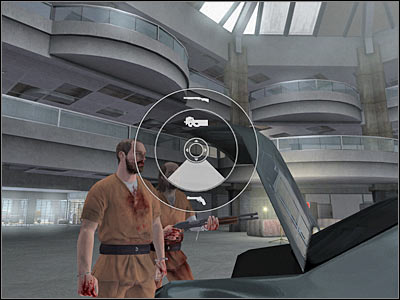 You may leave this area, because you won't have to take anything else from the trunk (for now). The vending machine can be found to your left. Make sure to listen to some hilarious dialogue lines on your way there.

New objective: Get In Cover Behind The Vending Machine

The sole purpose of this mission objective is to teach Lynch some new moves. You will only have to approach the vending machine and your main character will automatically take cover behind it (screen). Lynch should follow your lead with his object. 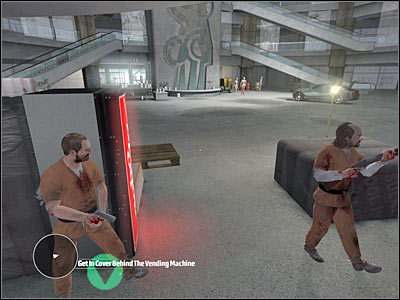 New objective: Show Lynch How To Blindfire From Cover

The game itself will instruct you how to behave in this type of a situation. You must be using a cover. Press the left mouse button a few times. These type of shots are very inaccurate, but you won't have to risk your life by exposing yourself to enemy fire.

New objective: Show Lynch How To Aim While In Cover

I'm sure that you've already tried to use this move during the course of the previous mission of the game. Once again, you must be using the vending machine for cover. Press the right mouse button in order to activate a zoom feature. Fire a few rounds and wait for Lynch to do the same thing. Be patient, because it's going to take him a few seconds. 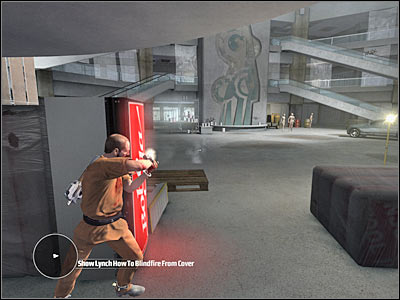 New objective: Get Back To Car And Pick Up Grenades

You shouldn't encounter any major problems while trying to fulfill this mission objective. Start off by going back to the car and picking up a couple of grenades (press the E key). Now you'll be allowed to practice throwing them. You can do this by pressing the G key. Also, make sure that you've read all hints. You won't find out anything out of the ordinary, however you shouldn't ignore them. Listen to a new conversation between Kane and Lynch. 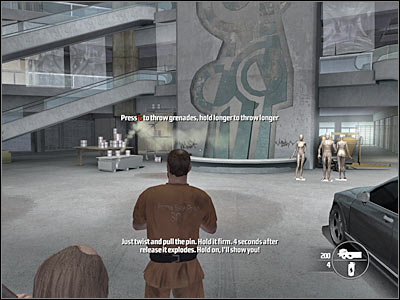