This section will give you an insight into the modification of the dinosaur genome in Jurassic World Evolution. Thanks to this, you will be able to breed better dinosaurs, stronger ones, and the tourists will rate your park better. 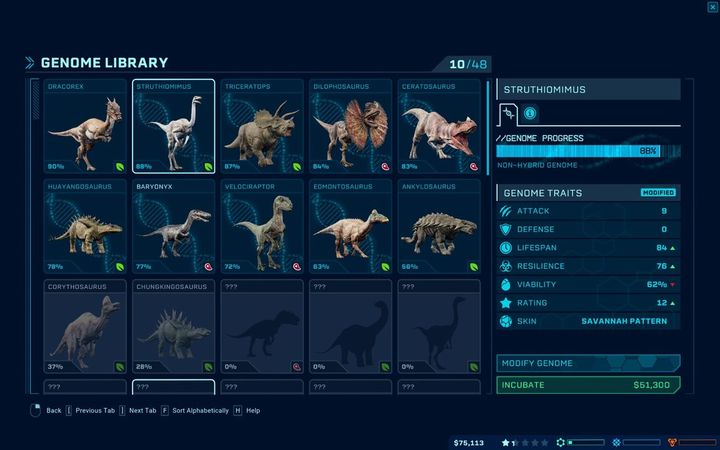 When you enter the Hammond Lab (the place where you create dinosaurs), you will see a list of dinosaurs to create. Modified dinosaurs can be identified on the miniature icons - modified dinosaurs have a double DNA helix symbol in the background (e.g. on the first screenshot, such a symbol can be found on the Struthiomimus, Triceratops, etc.). You can also see if the dinosaur was modified by clicking on it, and on the right side of the screen you will see its statistics and genome status. Modified means that its genome has been modified. Modification of dinosaurs allows you to increase its stats of attack, defense, lifespan, resilience, viability of its hatching and rating. Usually each modification reduces the chances of hatching (the process of creating a dinosaur may fail). If you want to modify and have the highest chance of hatching a dinosaur, install Success Rate 1.0 or Success Rate 2.0 in the Hammond Lab. These improvements increase the chances of producing a dinosaur. 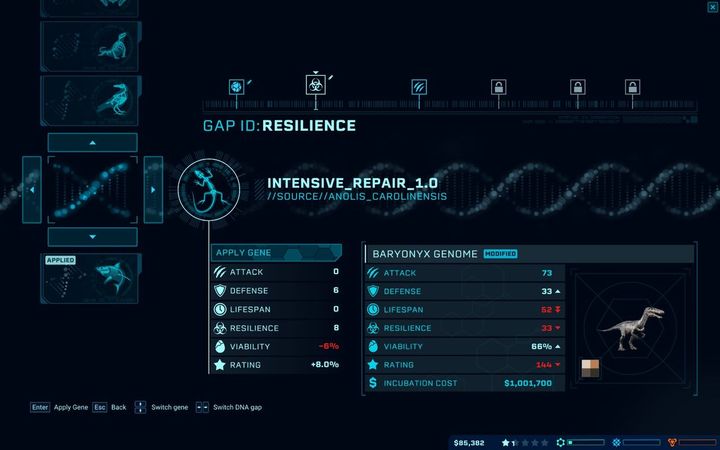 For more modifications, you need to research them in the Research Center. Remember that the percentage of discovered dinosaur genome affects the amount of modifications you can make. For example, as seen on the screenshots - if you have 77% of the Baryonx genome discovered, you can only make three modifications to its genome (see the second screenshot, the icon bar at the top of the screen, above Intensive_Repair_1.0). To unlock more places for modifications, dig teams should be sent to search for fossils and extract DNA from their findings. Modifying the dinosaurs (including changing their skin) increases the rating of the dinosaurs and your park, so it pays to do so. However, bear in mind that the cost of a modified dinosaur is much higher, including the installation of upgrades in Hammond Lab.