The guide for Into the Breach contains valuable information that will help you finish the game in a timely fashion. In Into the Breach, the player controls a group of mechs that defend a set of islands against Vek - a race of gigantic bugs. The guide contains the list of the available mech classes and a description of mechanics and game rules. You'll learn how to defend civilian and special buildings with low casualties. The authors of FTL have introduced pleasant 16-bit visuals. The game is a turn-based strategy with randomly generated 2D maps that are small and characteristic for their high difficulty level. Aside from guarding civilian buildings, the player is often forced to complete bonus objectives in order to develop his mechs. Between the missions, we can improve our unit and visit the shop in search of new weapons. During battles, we have to be aware of the maps' composition and terrain modifiers that affect the enemy movement and the actions of your unit. The game ends with the defeat of the final enemy or loss of a whole unit in battle.

The guide for Into the Breach contains:

About Into the Breach Game Guide

Into the Breach Video Game 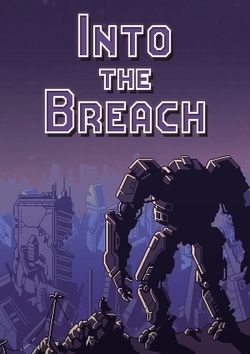 Into the Breach is a 2D turn-based strategy game set in an original science-fiction universe. The game, available on PC / Windows, has been developed by an independent studio  Subset Games.

Into the Breach is a minimalistic turn-based strategy, in which one assumes the role of a commander of small mech squads that protect what remains of the human kind against aliens that lurk deep beneath the ground. The action of the game is set on small, procedurally generated 2D boards covered with 64 squares, between which both the player and his opponent can move their units. It is up to the player to defend civilian settlements and small towns against Alien attacks. In combat, one controls mech robots, which in between the missions have to be equipped with various weapons. A player can also choose the pilots to control these mechs  their unique abilities are crucial for the result of each battle.

More About Into the Breach

This site is not associated with and/or endorsed by the Subset Games or Subset Games. All logos and images are copyrighted by their respective owners.