Get to the other side of the bridge

Going through the bridge is the only way to get out of the city. Zeke has found out, that there is a picket against the quarantine is being organized near one of them. This can be a great opportunity that won't happen again anytime soon. Unfortunately, the access to the bridge is being blocked by the cops. Meet with your friend and afterwards run to the police cordon. There's quite a crowd gathered there.

Karma moment: While in the crowd, you can initiate a riot or get to business straight away and show the cops who's the boss around here. A couple of burned bodies shouldn't be too much of a price for regaining freedom. But those civilians, a massacre can occur because of you.

Defeat the cops protecting the entrance to the bridge. To open the gate blocking the way, shoot the control panel a couple of times. Do the same with every other gate. Hide behind containers to avoid enemy fire. Once you reach the machine guns nests, hide and target in the centre, between the end of the cover and the roof of the guns. This way you should hit the cop right in the head. You can also hang from the upper part of the container and shoot.

On your way back, after meeting Moya, you will have to use the pipe system below the bridge. Jump from one to the other. If the distance between them is too big, note the metal bars mounted below the bridge. Shoot the part connecting them to the bridge and use them to move on. You will bump into Reapers a couple of times. It's best to eliminate them from as far as possible. Look out, as some pipes will crumble as you get on them. Jump to the nearest safe spot to avoid falling down. Eventually a concrete pillar will block your way. Jump on the ledge surrounding it and start moving along it. Look out for the sewage running from the pipes above. 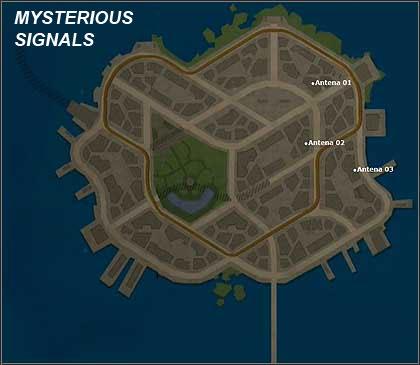 Moya picks up some strange signals from the nearby roof. Get on the top of the container. It turns out to be a small satellite dish with an audio device attached. Collect the data. Moya is positive, that there's another one somewhere nearby. Check out the area. Press the left analog stick to find it. Have a look at the minimap in the lower right corner of the screen. After you press the analog stick, the location of nearby objects will appear on it for some time. If you are near a satellite dish, a grey outlet will appear around the map, showing the direction in which you have to go. It this mission's description there are the localizations of three ones, but you can also search for some more. Overall, there are 32 antennas on the three islands. The map showing their location is in another chapter of the guide.

Fight off the Reaper attack on the clinic

The Reapers have attacked a medical clinic. Talk to the medic and kill all the Reapers in the area. There's just a few of them really. After getting rid of them, you will gain a point in which you will respawn in case of dying during a mission. There will be also no enemies appearing in this place. It's an example of one of many side missions in which you gain new terrain and the trust of the citizens. As you progress further in the game, you can unlock more territories by completing other missions. However it's not necessary in order to complete the story.

Start up the substation

Moya will inform you about a missing electrician, Carey. He has been last seen in a backstreet near the place where you began the mission. Go there. Carey is nowhere to be found, but there's a dead woman. It's his wife, Lynnae. Unexpectedly, you learn that you have the power to watch the last moments of a dead person. Check out Lynnae and you will see a green echo of a man, running. It's probably Carey. Follow him and look out, because you will have to deal with some Reaper patrols on the way. Eventually you will get to a substation controlled by the gang. Slowly eliminate the defenders and afterwards run to the dead alley behind Carey. Boom! One of those bastards blew himself and the whole substation up.

After you pull yourself together, locate Carey and follow him. He'll lead you to the sewers entrance. Pick up the cover and you will find yourself underground. Jump to the other side, to the transformer. Once you're there, connect the circuit and you will learn some new abilities (Pulse Heal, Bio-Leech, Arc Restrain). Heal the wounded by the locked door and the gate will be opened for you.

Cross the refugee camp. Poor people, lots of wounded and sick around here. You can try to heal them. There are also some Reapers on the ground, so treat them well (Bio-Leech, Arc Restrain). Afterwards, go further by using the pipes hanging from the ceiling.

Continue going forward while killing the Reapers in your way. Jump on the nearest cylinder, from it onto another one and you will reach some bars with Carey behind them.

Karma moment: Carey is convinced that the Reapers will kill his wife if he helps you, he doesn't want to open the door. You can tell him the sad truth, or treat him with some electricity.

After getting through the bar, you will reach another substation. Target the control panel (it's glowing red) and zap it a couple of times. This will bring the electricity back to this part of the city.

This site is not associated with and/or endorsed by the SCEA / SCEE or Sucker Punch. All logos and images are copyrighted by their respective owners.